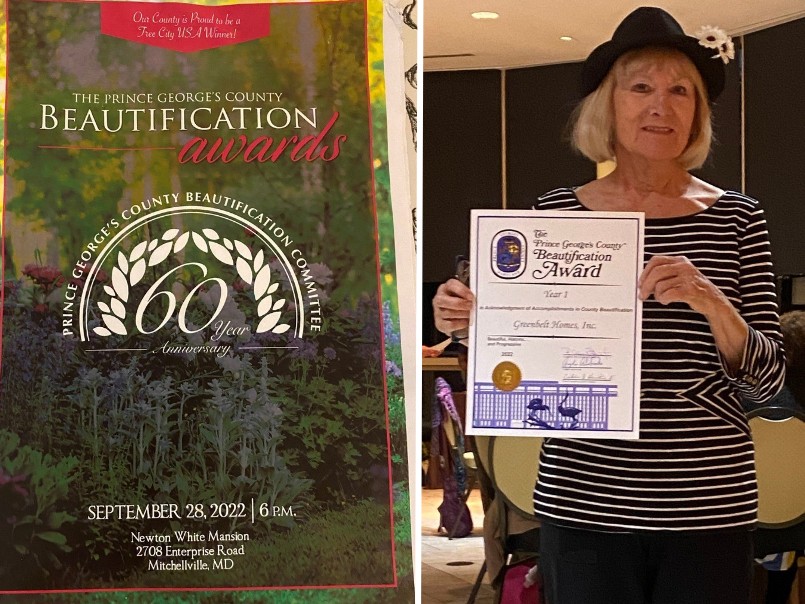 I haven’t mentioned it until now – because I wasn’t sure of success – but I can now confess that I nominated one of my adopted gardens for a county beautification award this past spring. You may recognize this garden at my co-op’s HQ, since I’ve blogged about it here and here.

Five years after I started the make-over, I deemed the showier part of it to be judge-worthy, so why not nominate it? There’s no charge, and maybe some glory to gain. Not to mention a more worthy goal – to inspire other gardeners, and maybe teach them a thing or two about creating low-maintenance gardens that are both beautiful and eco-friendly. 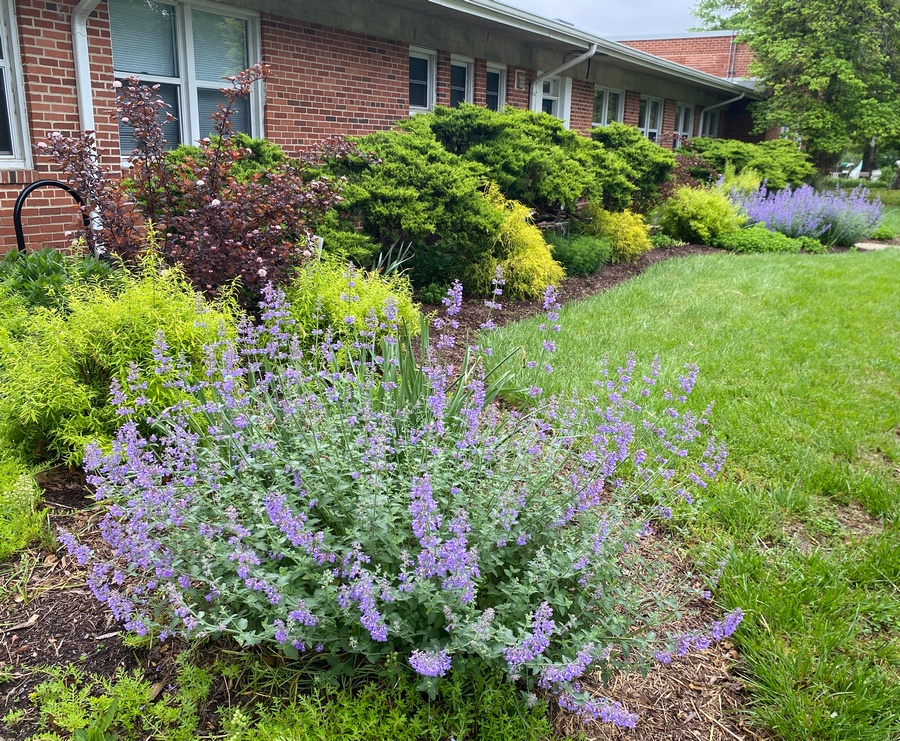 All I knew about the award program was that nominated gardens are judged by Master Gardeners and that I could choose between spring and summer judging. So I chose summer, with judges coming any time during July or August and no heads-up as to when in that very large window.

Gardeners, you know what it’s like to get your garden ready for a tour or garden party. Now imagine keeping it show-ready for two months.  That didn’t seem so bad until I realized that though  this front facade looks great, both ends and both sides of the building looked like crap – untended by me or anyone else in a very long time. So I spent most of the summer sprucing up one side (blogged about here) and then the other because while I had been averting my eyes from the ugly bits, admittedly others’ eyes are rarely so kind. They magically spot what’s wrong – a weed here, a speck of trash there, right? 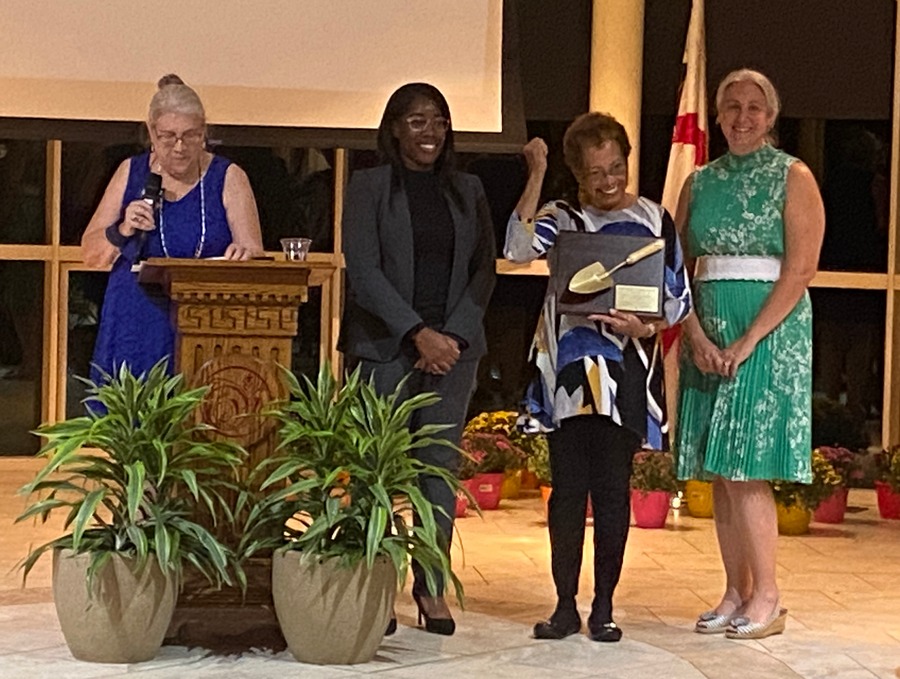 On to the award event! Everyone who nominated a garden was invited, with a strong hint that we not wear our gardening clothes but instead, “business casual.”  The top photo reveals my version of that.

The women in the second photo, who also followed the directive about attire, are presenting and receiving the truly coveted “Golden Trowel” award, saved for gardens that have been successfully nominated for five years in a row. My award, a paper certificate labeled “Year 1,” was just the beginning of a process that rewards gardening efforts over the long haul.

And what a great idea!  Just the opposite of the instant make-overs we see on HGTV. People have to really, really want an award to nominate their garden and keep it judge-worthy five years in a row. 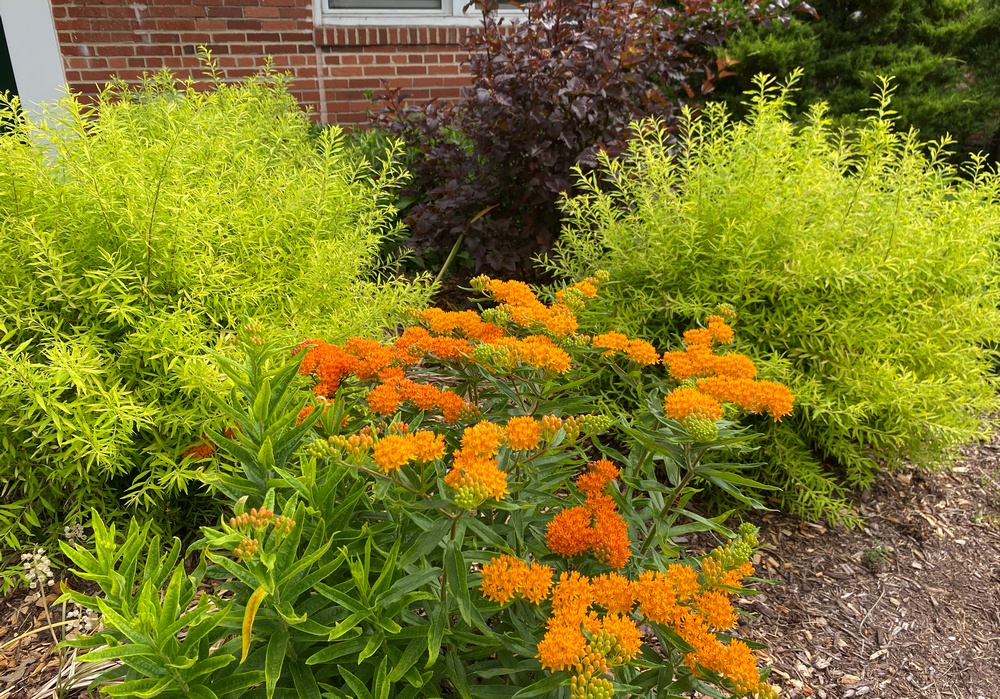 So, what criteria are used in judging the gardens, you might ask? Yes, I’m asking that, too. The award website doesn’t say, so I’ve asked, and the county hasn’t responded.

So I tried another source. From the long list of judges found in the event brochure I found just one whom I know – blogger/speaker/author Teri Speight – and pumped her for information. Teri, who has nothing but praise for the program, told me that judges have a list of features and qualities to assign ratings for – including good design, general upkeep and features of “sustainable gardening” like rain barrels and native plants.

So I’m encouraging the county to reveal their list of criteria, which could encourage good gardening by others in the county, as well as emboldening more residents to nominate their gardens for the award. I’ll do what I can to promote the program in my little community, but more information would sure help.

Publicity would help, too. The program isn’t promoted at all (and I follow lots of local garden groups on social media, including the county’s Master Gardener group) and surely more gardeners would participate if they just knew about it. Then it would be nice to publicize the winners – the Golden Trowel winners, not mere “Year 1” winners like me. 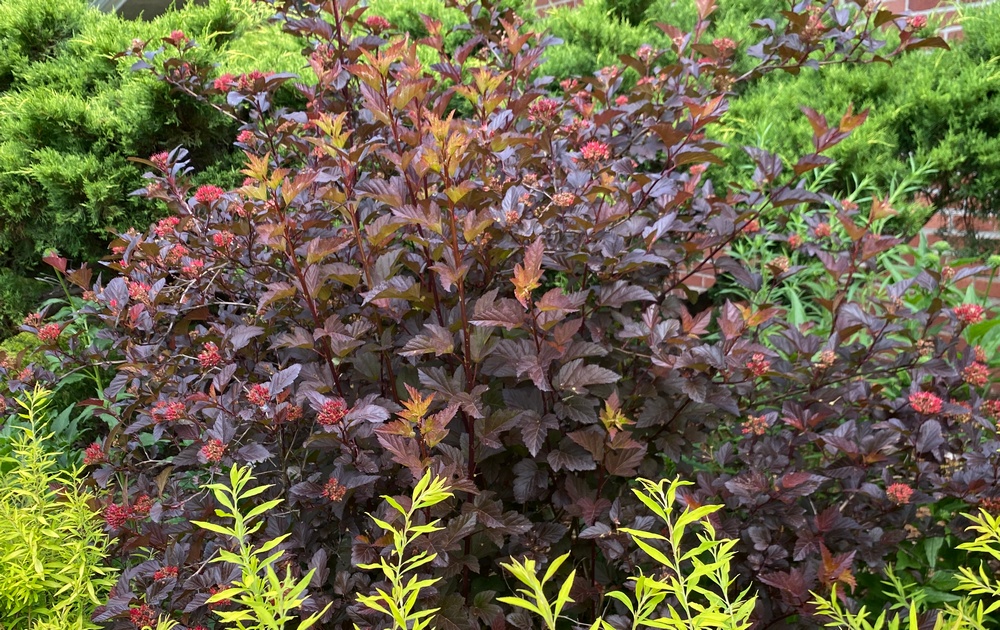 My claims for the garden’s sustainability

Somewhere, I can’t remember where, I did see a mention of sustainability being a factor in the judging, so I compiled a list of everything about the garden that might count as sustainability, put it online, and included a link to it on the nomination form – because I was finding it awfully frustrating to not be able to talk to the judges, to explain what I’d changed, what’s coming next, and so on. I bet you can relate.

I’ve since learned that the judges probably didn’t read my great treatise on sustainability, and deliberately so.  Teri told me that they make a point of assessing the garden first before speaking with the gardener, if he/she is present. I think that makes sense, though it runs counter to my need to explain everything. 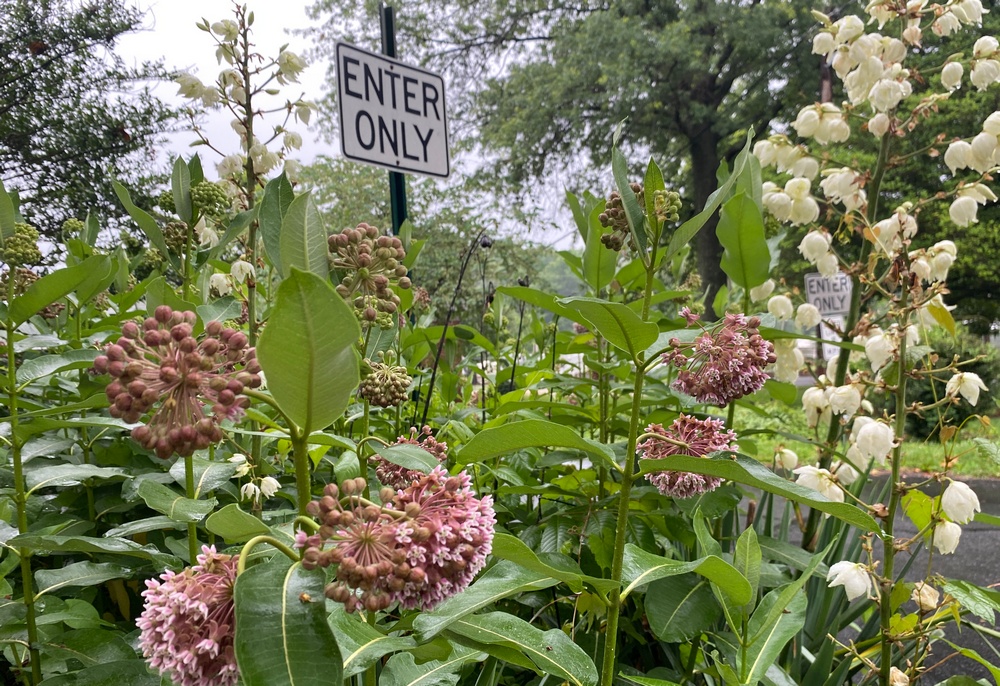 So readers, here’s the case I made:

It’s important to all of us these days but what does sustainability mean for a commercial landscape like this?

Is it self-sustaining? The garden is very nearly self-sustaining because it’s designed to need very little maintenance. It achieves that with plants that need NO supplemental watering after they’ve become established and no inputs of any kind (no fertilizer or pesticides). The primary maintenance needed is for the contracted landscaping crew to continue to edge around the borders with their string trimmers. Even after all the groundcover fills in completely, there will always be a few weeds to remove. And some of the perennials will spread where they’re not wanted – too close to the sidewalk or lawn, for instance – and need to be kept in bounds by digging up some of the new ones.

Does it do no harm? No pesticides are used here. Weeding is by hand (and trowel).

Does it use what’s already there? One great feature of the garden is its pruned-up Junipers that look like bonsai, something that’s often commented on. What looks like there was careful pruning-up, though, was actually just the removal of all dead parts. Experts had warned (in comments to this story) that all the old Junipers should be moved because they not only looked bad but harbored trash, rodents and thieves. I guess that might have been the case but with the old dead parts removed and the inner structure revealed, there’s nothing hidden to fear.

The present garden also uses all of the existing Rudbeckias (Black-eyed Susans).

Increasingly, free wood chips from elsewhere on the premises are used here as mulch instead of bagged products.

Does it provide for wildlife? You bet! Native perennials in the garden include not just Rudbeckias (Maryland’s State Flower) but also Coneflower, Garden Phlox, Butterfly Weed, Coreopsis and, at the building’s far end, dozens of Milkweed. The two nonnative perennials – Nepeta and Sedum – are also beloved by bees.

Shrubs providing spring flowers for pollinators plus structure for year-round habitat include the native Ninebark and the nonnative ‘Ogon’ Spirea. That’s in addition to the Junipers.

Does it provide other eco-services? All the plants here, to varying degrees, filter air pollutants, sequester carbon, retain and filter stormwater and prevent erosion. Shrubs also provide habitat and structure for birds. Another benefit often considered an eco-services is “improving occupants’ mental, physical, and well-being,” and this garden certainly does that for people who work in and visit this building.

Did I miss anything? Or include something you don’t think of as sustainability?