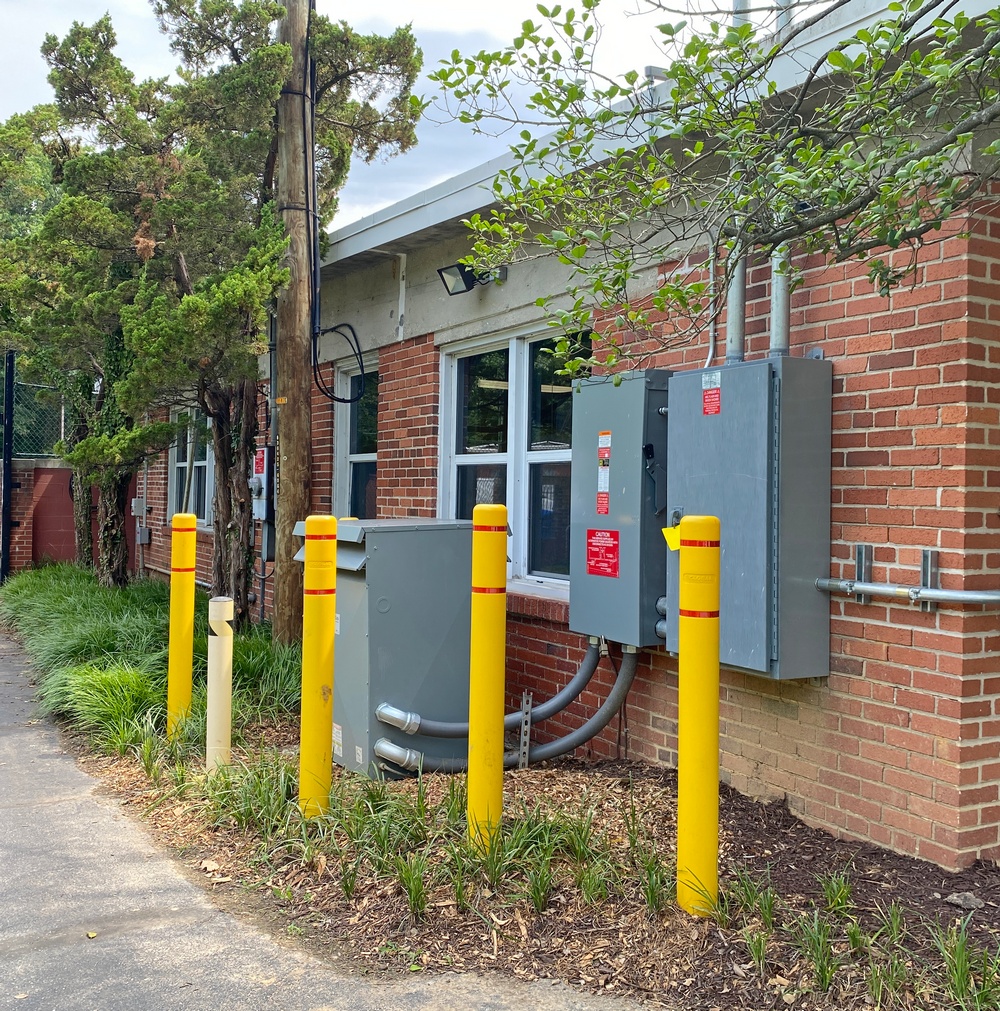 This isn’t your typical “after” photo, known on HGTV as the “Reveal!” What you see is the most prominent corner of my housing co-op’s HQ building where I’ve been the volunteer landscaper/gardener for about four years.  (Photos here, with plant IDs.)

This spot will never be a beauty, with its prominent utility panels and bright-yellow bollards protecting them. And the plants are uninspiring, to say the least – new Liriope, with wood-chip mulch.

On the left are old Junipers with some English ivy on the upper trunks, slowly dying. 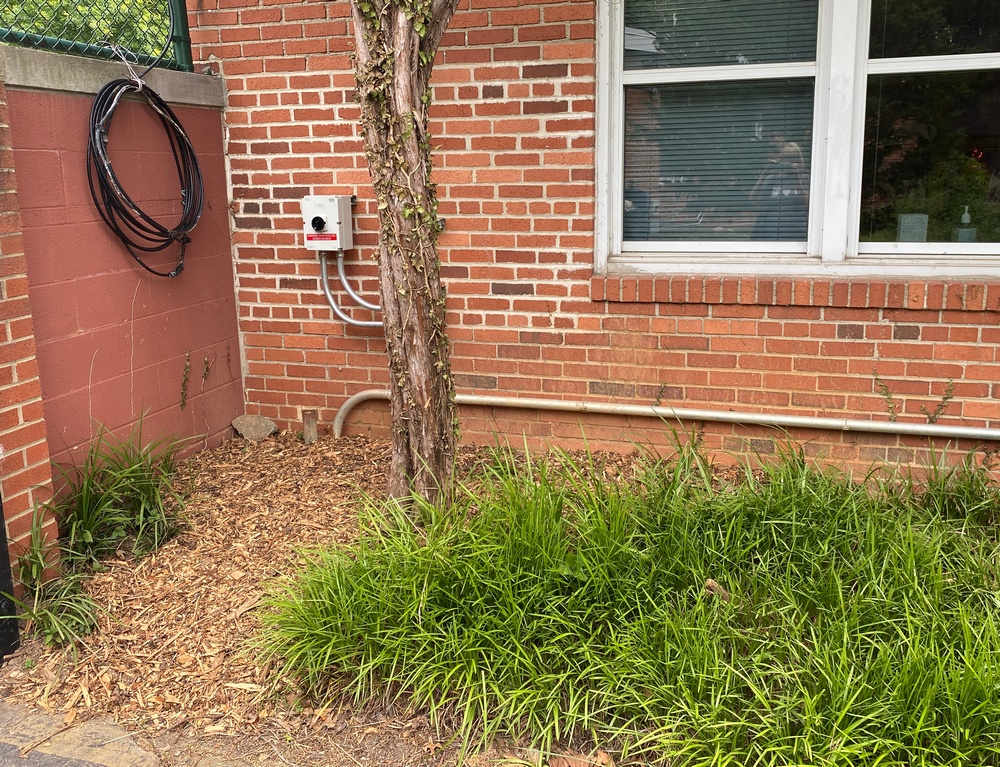 At the left end, just before the gate into the workyard, are existing Liriope, new wood chips, and the remains of the now-dying English ivy.

I know these scenes look utterly boring to you all – they sure did to the friends I subjected them to. And no one on earth but me finds them thrilling.

But hear me out and take a look at some “before” views. 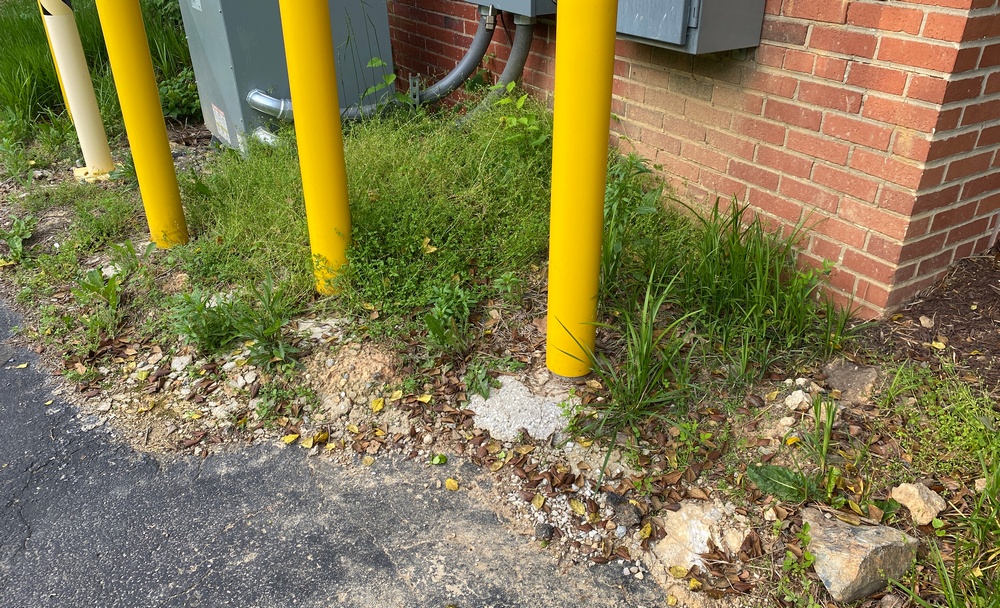 Over the winter some very impressive, progressive and money-saving solar panels were installed on the building’s roof. Yay!

The construction crew left behind this prominent corner covered in construction debris, which quickly gathered weeds. It looked neglected and ugly. 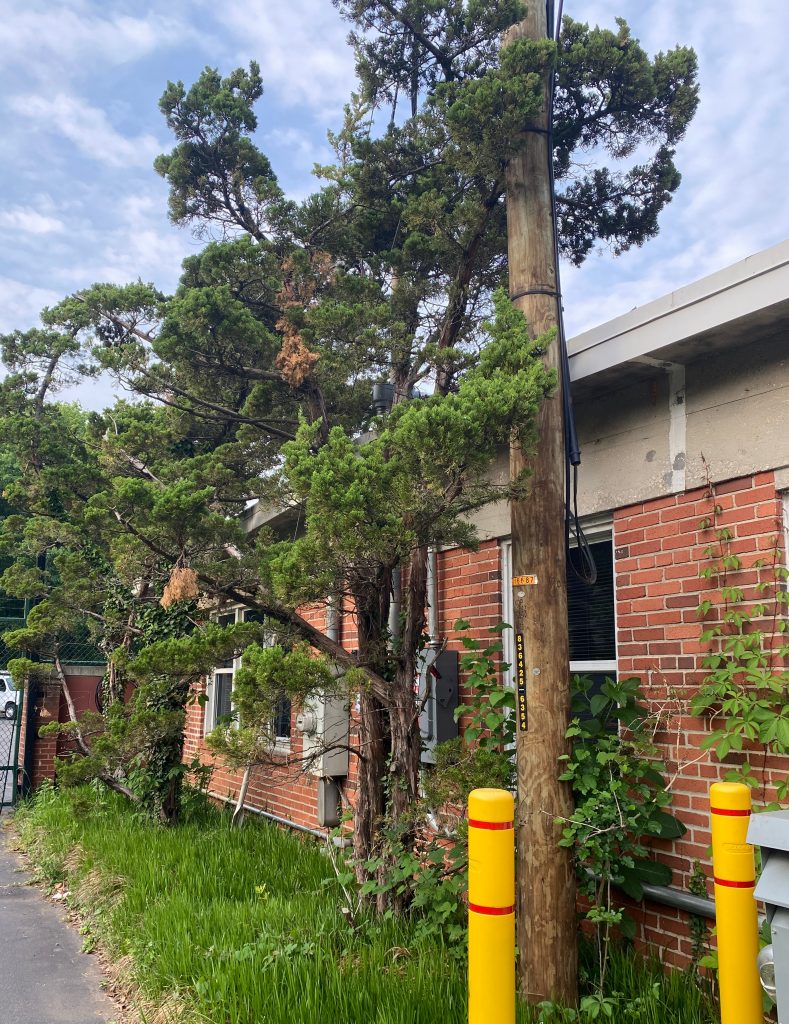 Here you see lots of weeds infesting the Liriope and English ivy climbing the walls and trees. Juniper branches hanging over the driveway were being broken off by trucks. 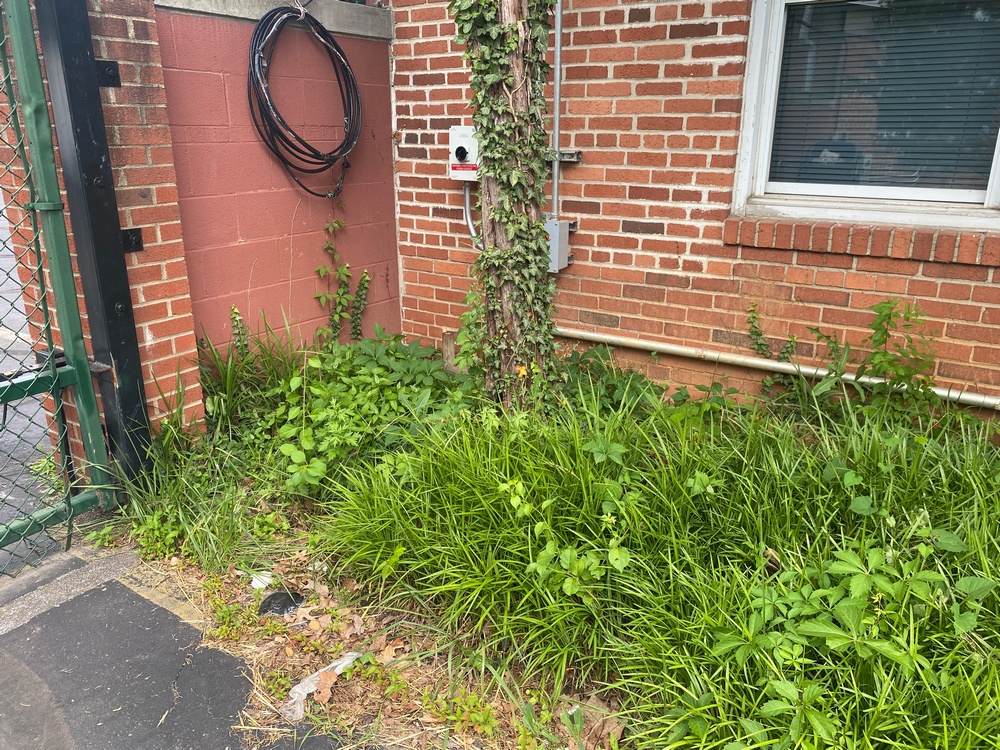 This end was mostly weeds, plus trash! 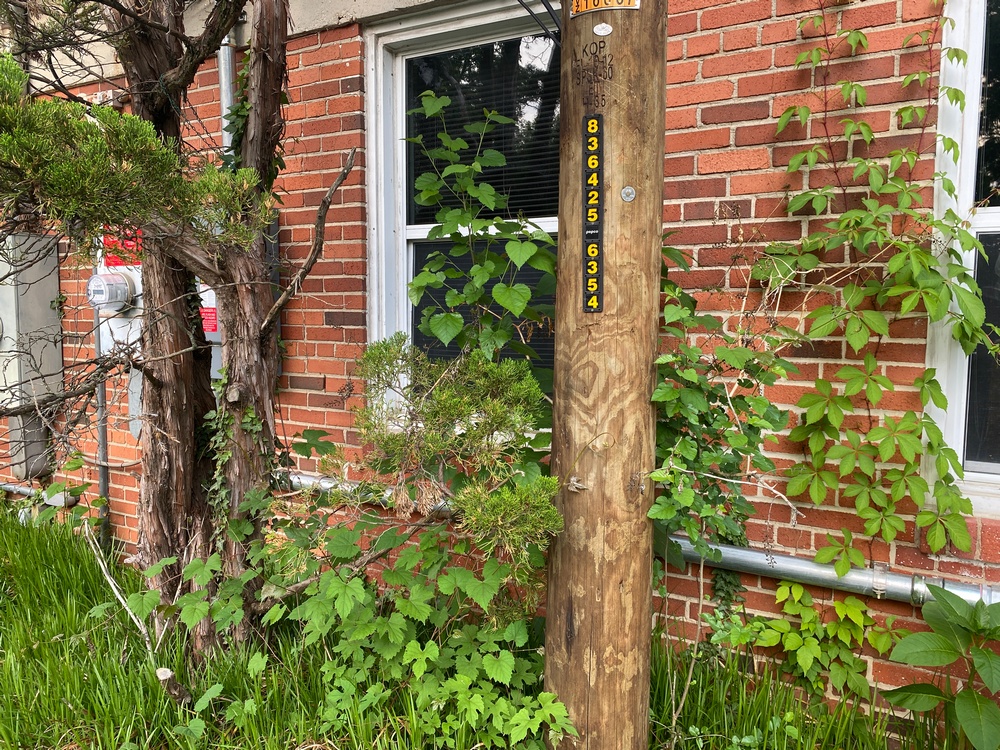 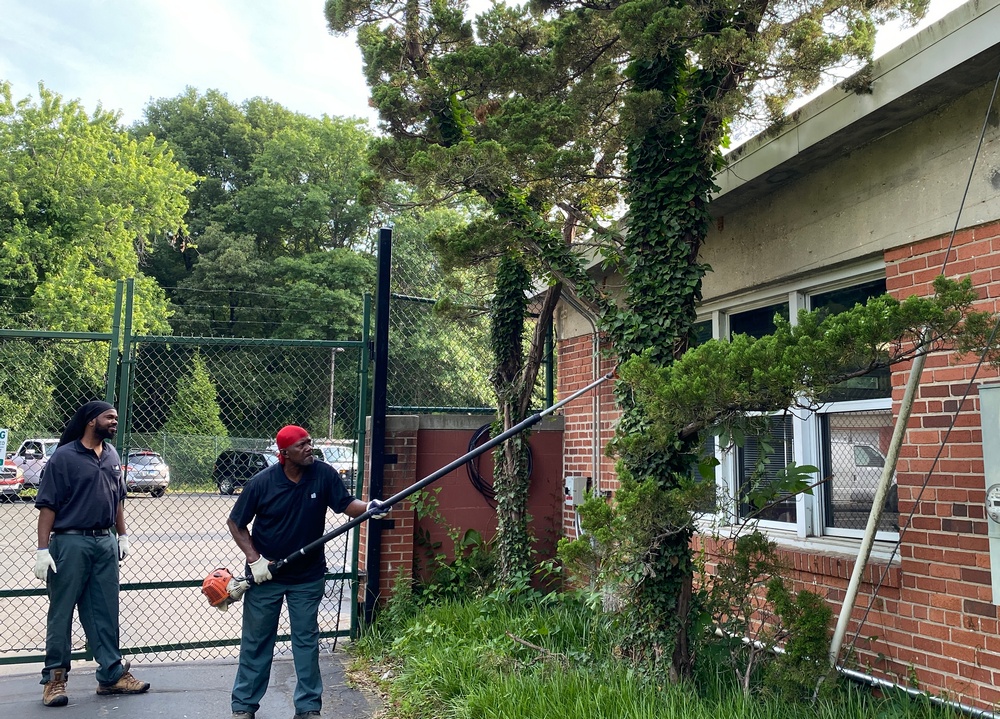 So I asked our Maintenance Department for some help, and help came in the form of these two gentlemen, seen here pruning per my instructions. They also removed all the construction debris around the utility panels and dumped some topsoil there so I could plant the area with groundcover. A third worker was required for that part, one with a front-loader to remove the debris and then return with a load of topsoil. All that took about an hour.

The Thrill of Clean-up

I’m embarrassed to admit how thrilled I was to have help in cleaning up this area and then to finish the job myself, which took about another hour.  You’ll understand if you’ve ever been achingly bothered by trash and weeds in a prominent spot – or any spot you have to look at yourself – and had a sudden craving to clean the damn thing up yourself.  This modest make-over has been super-satisfying to me! And with the ivy gone and the groundcover quickly filling in, this public-facing border will look tidy with almost no effort, indefinitely.

I’m betting that literally no one comments to me on this part of my adopted garden.

On the Sustainability of this Commercial Landscape

Sure, we don’t love Liriope spicata, which can be destructive where it spreads into woods or perennial borders, but all by itself in this spot it’ll cause no harm.  And it was free and already covered 90 percent of the area. So it’ll quickly cover all the bare spots, preventing new weeds from taking hold. It requires exactly no inputs, even water in a long drought.

The tree-choking ivy is gone and the Junipers, the upper branches of which are frequent stops for birds, are freed of it.

I know some of you will still think oh, why not plant a pollinator garden there?  To which I say this is an improvement, it’s self-sustaining without an increase in budget or volunteer effort, and the pollinator-attracting flowering plants are just around the corner along the front of the building. This utilitarian side of the building isn’t the place for a colorful show, anyway.

Am I the Only One?

An honest question for you folks. Do ugly, unkempt, weed-filled public spots make you crazy, too? Oh, I hope so. Because I’m feeling like the only one; otherwise someone would have complained about the neglected state of this very public building long ago and gotten it cleaned up. Right?

When I moved here 10 years ago I found the landscape an embarrassment to the co-op.