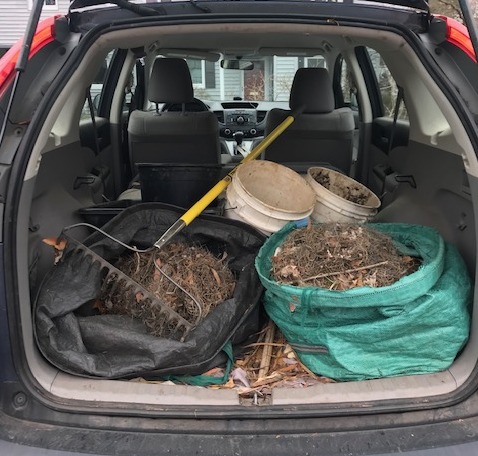 Behold my 2013 Honda CRV! Just don’t ask me to give more than one person a ride anywhere on short notice, coz it would take a while to make the back seat presentable again, and then just barely.

The reason my car always looks like this, even in late December, is that since taking over several public sites to garden, my car has become a tool shed and temporary storage for yard waste in one direction, mulch and wood chips in the other.

Fortunately I don’t give a damn what my car looks like, but I do care about my 5 adopted gardens. Turns out, the townhouse I moved into 8 years ago now, which I chose partly for the small garden, isn’t quite enough for my gardening needs.

Honestly, I’m thrilled by the opportunity to do garden make-overs, especially dramatic ones in very visible spots, like these 5. Even mundane tasks like weeding make me excited to get up in the morning, as early as the sunrise in summer, and get started on them.

Here’s a survey of my charges.

Garden 1. The small border above was once a weed-filled spot in a very prominent city plaza, just outside the local bar and music venue where I’m a regular. I didn’t take a real “before” shot, but here’s the space after being cleared of weeds and then planted, with no budget, so mostly donated plants. The existing bank of Nandinas and a new cherry tree were the city’s contributions. 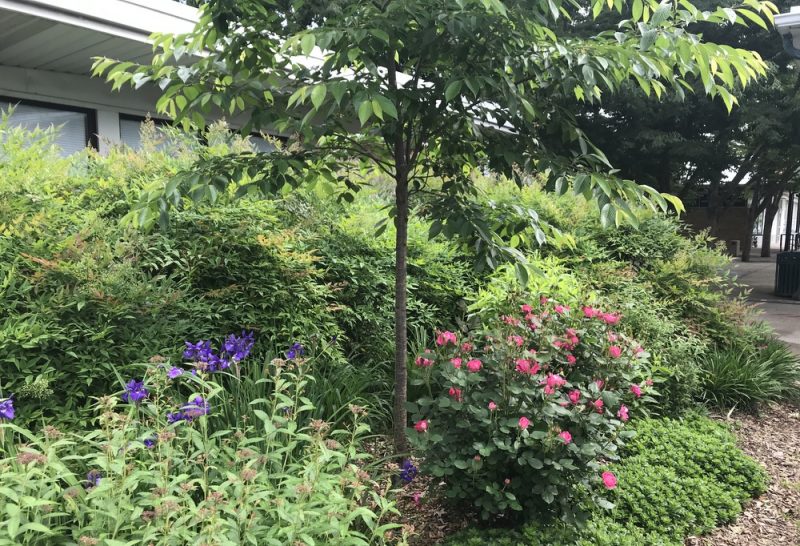 The plants have filled out very nicely and this fall needed some thinning. People pass by here all day long and comment, especially when the groundcover Sedum takesimense is blooming. 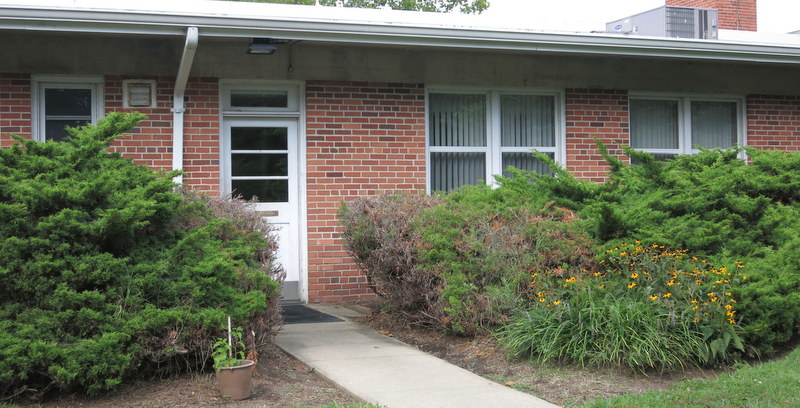 Garden 2. The landscape in front of my coop’s office building is my most exciting adopted garden – because of the high visibility, the dramatic nature of the change, and having a budget! Those overgrown junipers near the door had to go, so to replace them I bought and was reimbursed for 16 new shrubs and a few perennials. 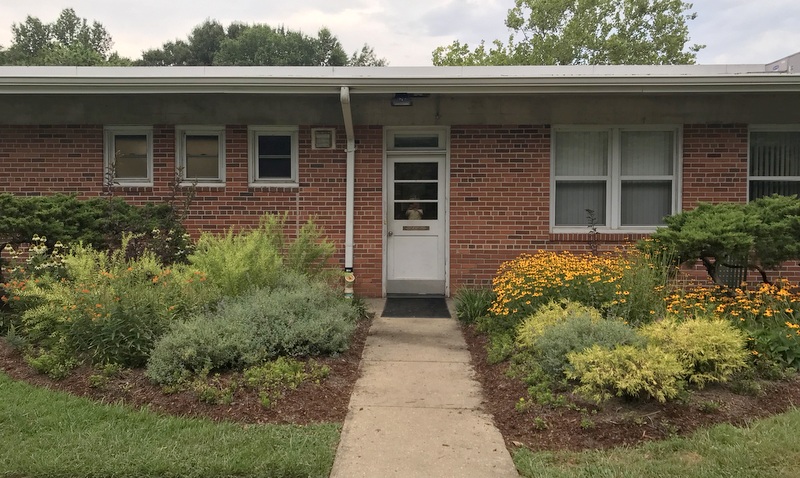 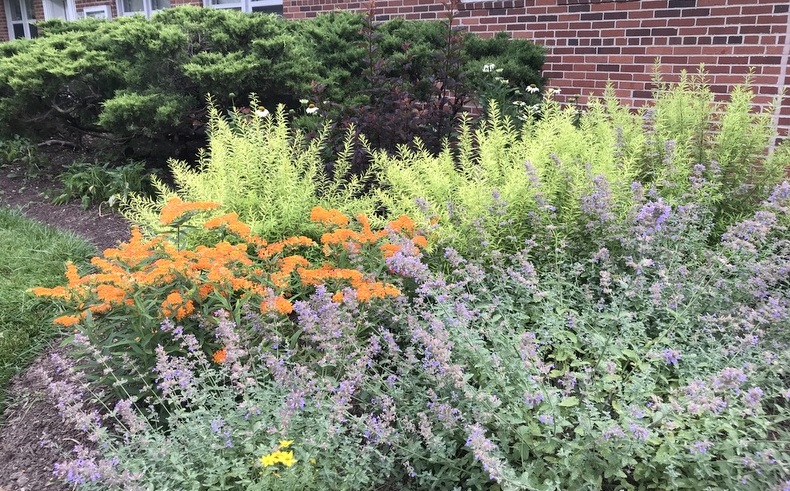 Someone donated the Nepeta in the foreground above and they’re so fabulous I’ve added them to my own garden. This year I added the orange-blooming Butterfly Weed at the suggestion of our general manager, and it’s another great performer. More details here. 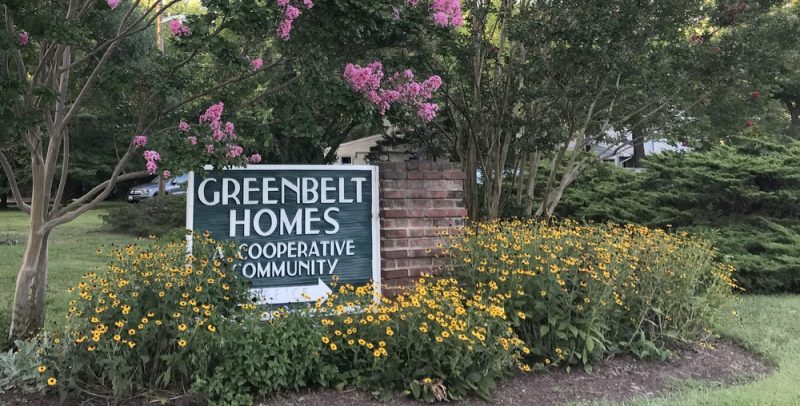 Garden 2A. Targets of my obsessive making-over have inevitably spread from the office building to the entrance a block away. Here I used nothing but Rudbeckia, all donated. It’s our state flower and to my eyes, the most cheerful, long-blooming plant in Maryland.

Garden 3. About a block from my house is this corner I pass frequently and it was bugging me no end. It looked like crap and weedy shrubs were impeding driver visibility. 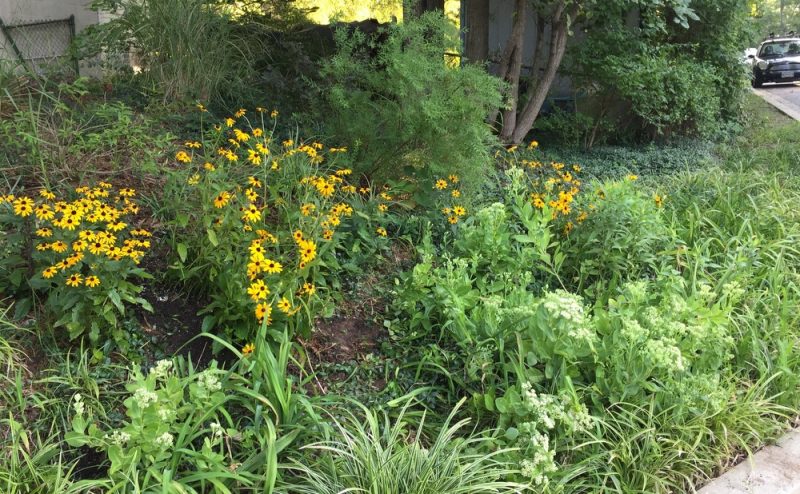 After two whole seasons I’ve finally gotten rid of enough of the poison ivy to enjoy weeding and planting here. With no budget, I relied again on donated Rudbeckias and more recently, two high-impact Spireas. 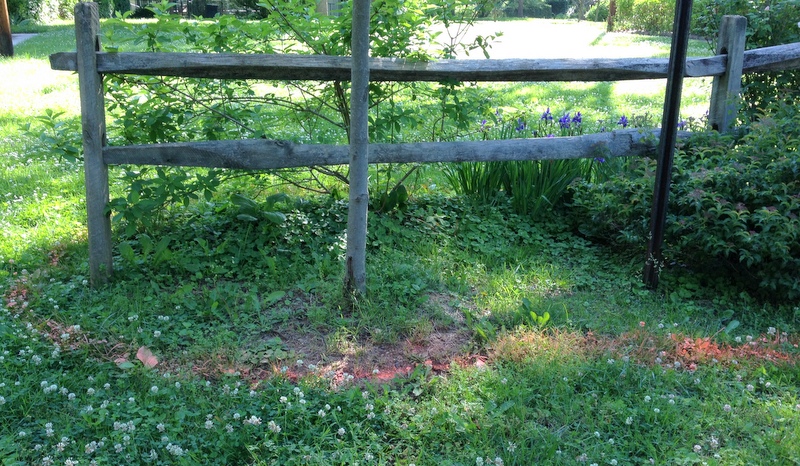 These last two adopted gardens are close enough I don’t have to drive to tend them.

Garden 4. In the “before” photo above you see the shrub border between my and my neighbors’ parking lot and the green common area we share. I used orange paint to create a shape that would be easy to mow around.

So now the crew can tell where to stop mowing, and the tough Carex around the edge keeps weeds in the lawn from creeping into the borders. On the right is a nearby island that I started, using donated Spireas and Ninebarks. With more Carex at their feet, this shrub island is as close to no-maintenance as anything I’ve ever planted. 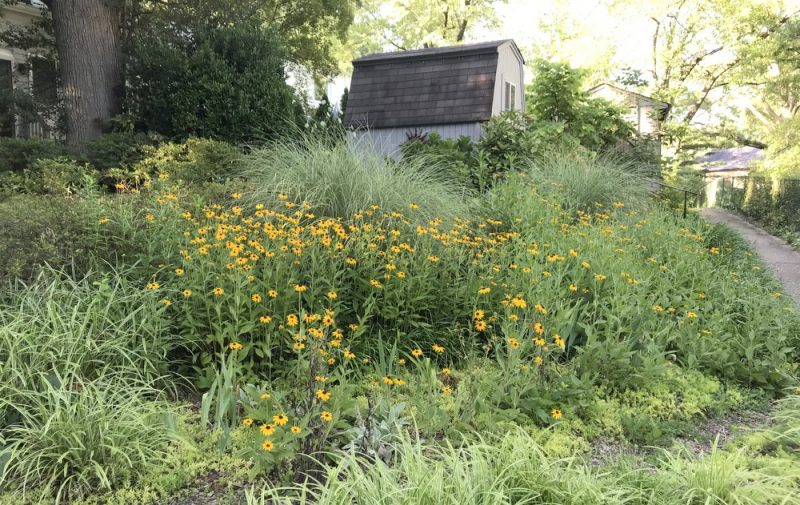 Garden 5. The only non-public space I’ve adopted is this bank at the end of my next-door-neighbor’s back yard, along the main road. You may be bored by now to see MORE Rudbeckias and Carex, but beggars can’t be choosers, and I like the result, especially with the addition of ornamental grasses. All the garden needs is one cutting-back a year. I do no supplemental watering there and less and less weeding each season. 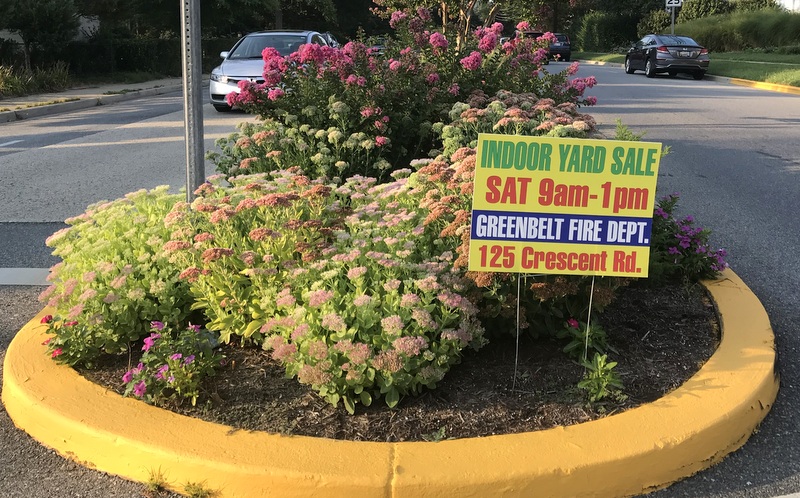 Finally, a bonus garden, one that I haven’t adopted, except as a spot to complain about. It’s the welcome median into the heart of the historic town, which city staffers plant and maintain with the help of irrigation. (A few of us have lobbied for a reduction in the city’s use of annuals and irrigation, and we’re told that change is happening.)

My complaint about this garden is obvious to all of YOU – that sign junking it up! So I posted this photo to our local Facebook group, asking if signs could be put somewhere ELSE, please, and it caused a bit of an uproar. Honest to god, I was accused of being anti-fire department!

That brief scuffle on social media made me grateful for my 13 years of taking some occasional shit for speaking out here on the Rant. It’s trained me and, I think, toughened me up for responding (or not) to this kind of nonsense.

Though boy, it IS different when the people angered by something you’ve written are the very people you run into in the grocery store.