The Reigning Queen of Gardening is…Oprah? 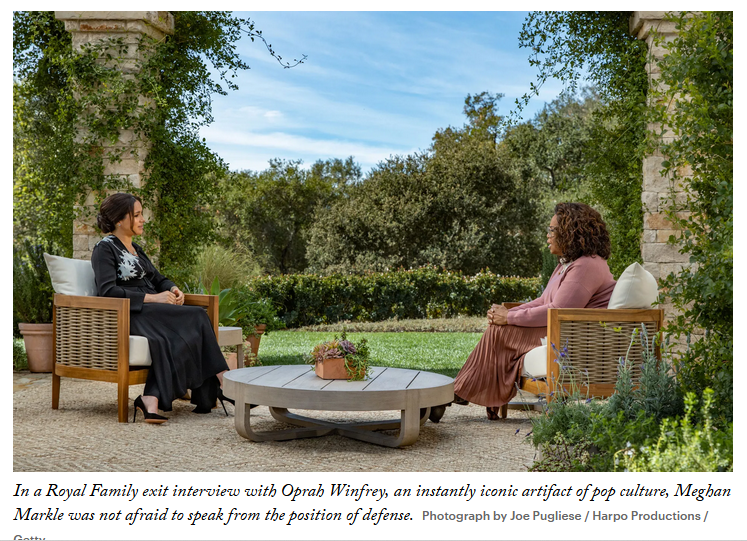 By now I’m betting you’ve all seen this view of Oprah Winfrey’s garden, the set of her famous interviews with Harry and Meghan. 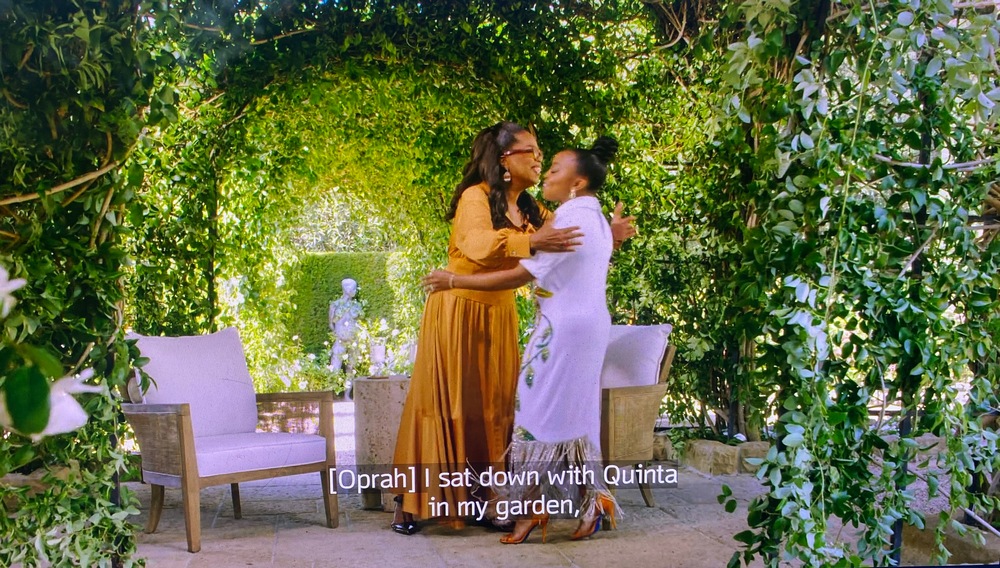 But look at another shot of Oprah’s garden for her sit-down with Quinta Brunson.  (Love her!) Call me picky or worse, but are those fake plants we see, especially near the camera? Looks like garden design by Hobby Lobby or Michaels.

Anyway, that’s what got me interested in gardens and gardening a la Oprah. 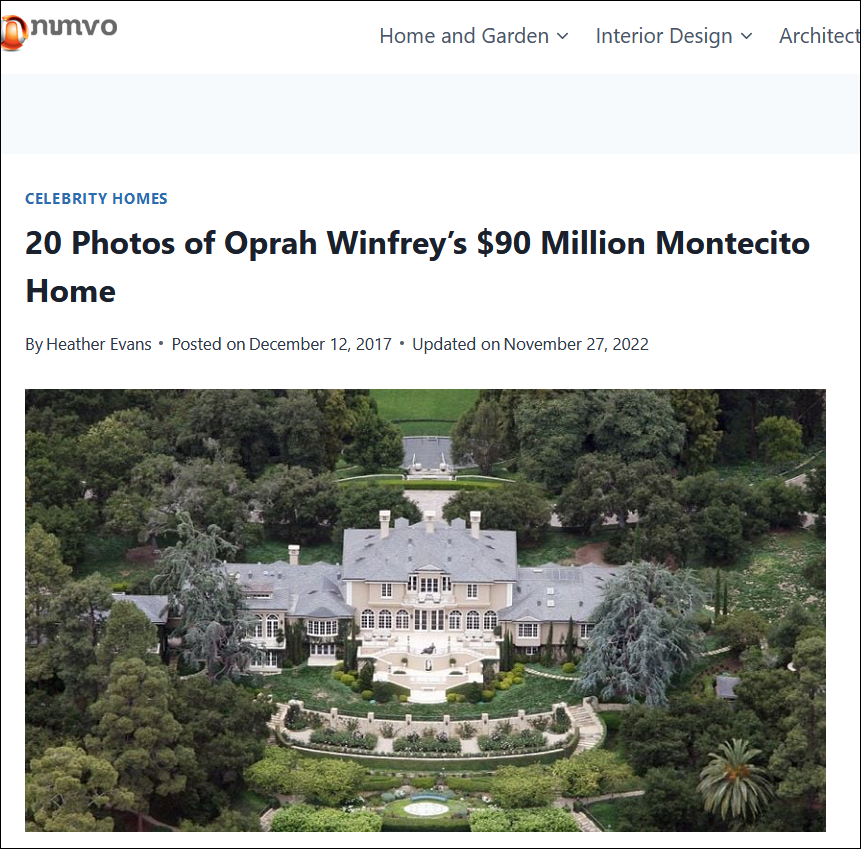 From one source I learned that “Inside the approximately 23,000 sq. ft Neo-Georgian style mansion, there are six bedrooms, 14 bathrooms, a gourmet kitchen and wine cellar, library, theater, and 10 fireplaces. Interestingly enough, it doesn’t appear that there is a swimming pool in the backyard, which is a very common addition to any California mansion.”

And that “Oprah has referred to her backyard garden as a ‘sanctuary,’ and it is easy to see why when you get a glance of just a small part of it in a photo. Perfectly manicured topiaries sit alongside bunches of flourishing roses, lilies, daffodils, dahlias, irises, perennials, and annuals that bloom almost year-round. Depending on where she stands in the huge garden, she can take in picturesque views of the Pacific Ocean or the Santa Ynez Mountains. See, it really is a sanctuary.” 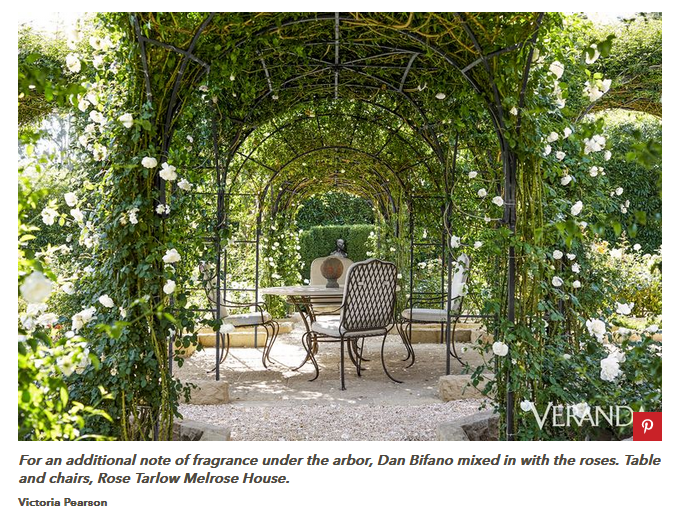 And this article includes another shot of the interview location, with what looks like real rose blossoms and foliage. Gorgeous.

Another source digs deeper into Oprah’s love of roses:

To create this paradise, Winfrey hired master rosarian Dan Bifano, who also created gardens for singer Barbra Streisand and Tom Ford. Winfrey often does interviews under this magnificent arch of Sambreuil roses that are also scented with jasmine, including her tell-all with Prince Harry and Meghan Markle.

Climbing Sambreuil is one of her favorite roses though there are 600 rosebushes on her 65-acre property. However, Bifano has said that “Oprah likes the Brass Band rose because there’s a hint of orange in it.”

Of course, there are a variety of other magnificent flowers on her property, which overlooks the Pacific Ocean, including Sunset Celebration roses as well as hydrangeas, lilies and dahlias. She even helped develop a new rose breed called, Legends. Certainly an apt name for the journalist and philanthropist.

About the “Reigning Queen” Label 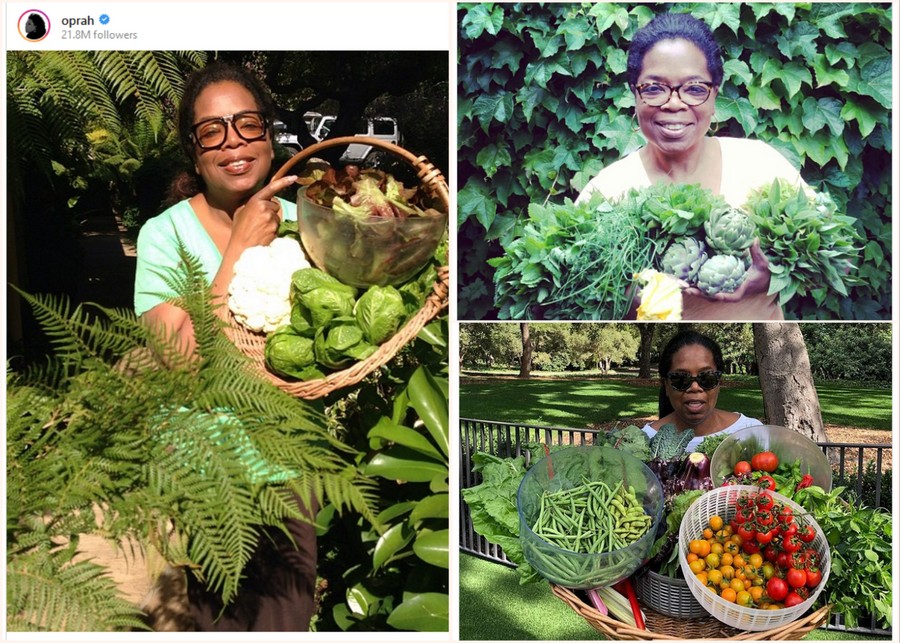 It was Insider Magazine that called Oprah the “reigning queen of gardening” based on 14 photos from her Instagram account. And the photos ARE convincing. Actual vegetables, not set decoration from a craft store. But wait – that doesn’t look anything like her formal garden in Montecito. Wonder why.\

I should have known that Oprah would have another whole garden for veg-growing – in Hawaii. Nice! 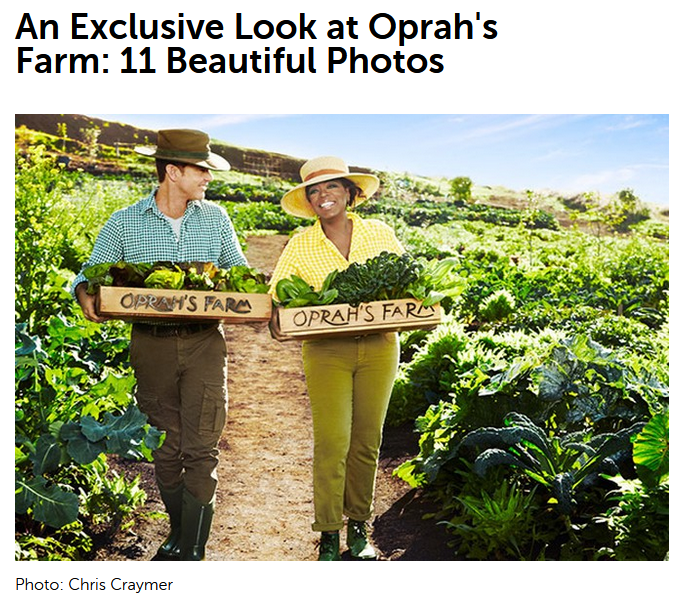 Here’s the story, with the 11 photos of actual vegetables growing there in Maui.

Is My Jealousy Showing?

After some google research into the world of “Oprah’s gardens,” I’ll never again doubt her gardening bona fides. And was my doubt just jealousy, anyway?

Like most of you (all of you?), I wouldn’t mind being able to afford Oprah’s homes and gardens, though I’d prefer something more modern and naturalistic than the super-formal garden around her formal mansion.

But I bet I’d love her Maui garden. And if Oprah’s publicists thought she needed a post about it on a popular garden blog I’d happily hop on her jet and go see it for myself for a GardenRant exclusive.

GardenRant has an Oprah Connection

Back in 2009 Rant co-founder Michele Owens wrote a wonderful piece in O Magazine about gardeners in Detroit. This post about it summarizes her interesting points.