A Journey and Much Glory for a North Carolina Red Spruce, the 2022 Capitol Christmas Tree

UPDATE: Big spread in the Washington Post about this tree’s role in the campaign to save the Red Spruce. (Paywall troubles? Try accessing it through your public library’s website.)

Ceremony in NC for the 2022 Capitol Christmas Tree – with folk singers, and the Cherokee boy chosen to light the tree.

I got a nice email from “long-time” reader Nina Shippen in Brevard, NC with a story idea:

I’m writing because I thought you might be interested in the story of this year’s Capitol Christmas tree – “Ruby.” She’s an 80-some foot Red Spruce harvested from Pisgah National Forest near Brevard NC, where I live. (Asheville is the more widely known reference).

This probably happens every year with the Capitol Christmas trees, but people here have been pretty excited about her send-off, and our local Ranger District for Pisgah National Forest did a really great job in involving the locals at her launch last week. Everyone here knows at least one person involved in the show – the sawyer, the Forest Service people, the guy who  owns the participating Bartlett Tree Company, the musicians who played on the Blue ridge parkway for the opening ceremony….

The ceremony and cutting took place just off the Blue Ridge Parkway – the truck drove down to the tree’s location, then had to back up for two miles on mountain switchbacks to get to the Parkway – took two hours.
For the ceremony,  the musicians are Woody Platt and his wife Shannon Whitworth performed. Woody until recently was the lead singer for the Steep Canyon Rangers, a Brevard-based blue grass group who has made it big.  The Secretary of Agriculture for the Eastern Band of Cherokees takes the mike and introduces this year’s tree lighter, a young Cherokee boy.

Yes, every year since 1970, the USDA Forest Service has provided the U.S. Capitol Christmas Tree and this year Pisgah National Forest was selected to provide the tree. The tree was then chosen by the Superintendent of the Capitol Grounds, who worked with local foresters to find a healthy tree with a full canopy, a conical shape with dense foliage, a straight trunk and the right height.
Of the seven Christmas trees in DC that I’ve called the best in town, this one at the base of the Capitol has become my favorite because of local stories like Nina’s there in North Carolina.

“Ruby” before and after being felled.

Ruby (somehow a “she”) is an 78-foot Red Spruce, a tree that’s currently threatened, and locals are working to stabilize and expand its territory. The person who cut it down – whom I’ve learned is called a “feller” – is a long-time Forest Service employee honored to be chosen to do the deed.

UPDATE Does this Make you Sad? Nina Responds in a Comment:

No push back here – you’re right, it is sad. But here is a palliative – Ruby is named after the Red Spruce, Picea Rubrum. It was selected out of several because it checked all the boxes: beauty contest; growing near to the road so no damage to surroundings in removing it; and maybe most important – the endangered Carolina Northern Red Squirrel was not nesting, nor were the spiders and other insects dependent on it. A Forest Service ecologist climbed the tree and searched for the critters and found none.

The Red Spruce population of the Southern Appalachians is disjunct – as the last glacier receded, it moved northeast up the Appalachian chain and up our mountains in search of cooler weather, until it got to the mountain tops and formed a unique ecology. Its ecology supports several insect, animal, and plant species who are dependent on it. Red Spruce stands are threatened, for several reasons. Ruby has served as an ambassador along its route, informing people about her singular ecology and the need to preserve and grow existing stands.

Her seeds were collected and will be grown for reforestation efforts at the Southern Highlands Reserve, a private non-profit working with the Forest Service to grow and plant tens of thousands of Red Spruce saplings. I see them when hiking, growing into forest communities. When her display at the Capitol is finished, Ruby’s wood will be used for making guitars by a local instrument maker.

Harvesting from one of our tree farms would seem feasible, but they grow Balsam Firs for the most part. Besides, the Capitol Christmas tree always comes from national land, like the Pisgah Forest.

The Journey to DC

It’s not easy transporting a 78-foot tree. It had to be wrapped (its branches range from 20 to 8 feet in diameter) and watered with 50 gallon water bags. 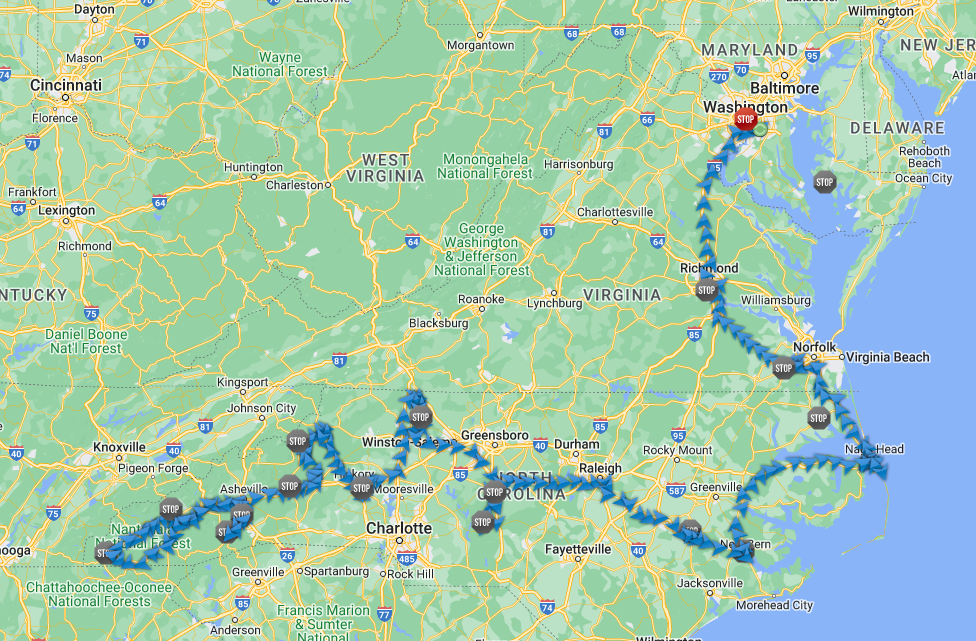 Here’s the route it took, and I love that it was greeted as a star at every stop it made. Depending on the year, the tree may visit as many as 25 communities along the route to DC. 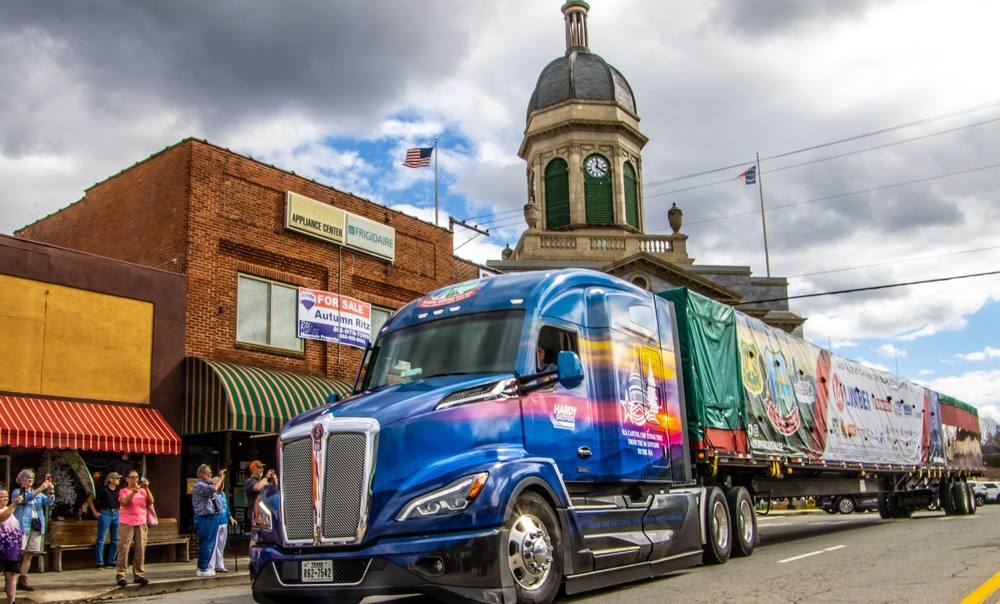 Above, on Veterans Day the tree stopped at the NC State Veteran’s Home in Kinston, NC.  The tree also stopped in Cherokee, NC, home community of the tree’s 9-year-old official lighter.

There was lots of coverage of the arrival of the tree and the Architect of the Capitol Facebook page provided rare up-close photos of the installation. 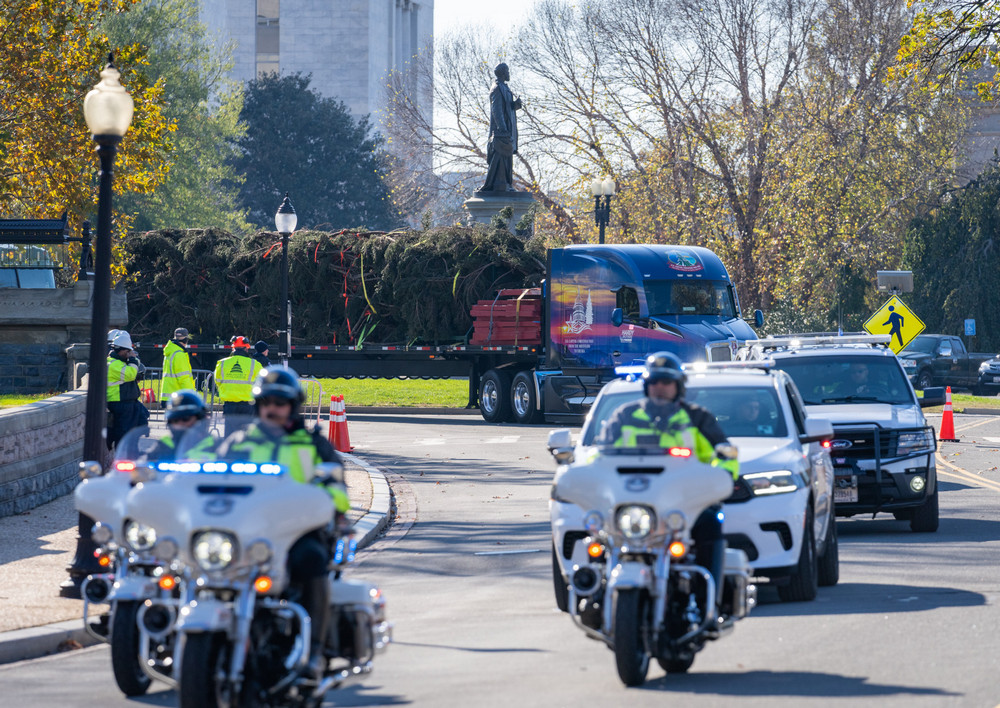 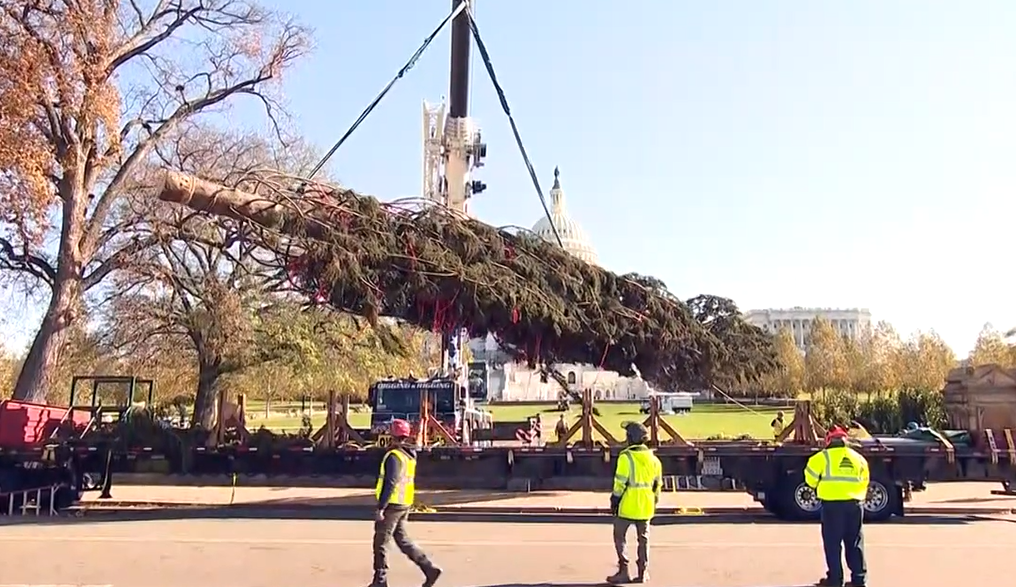 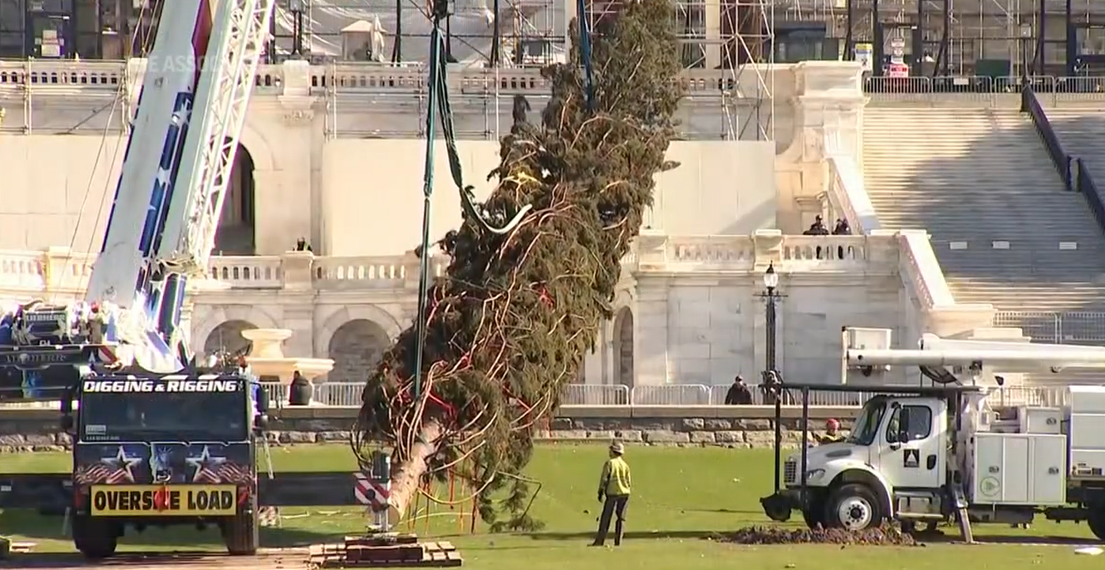 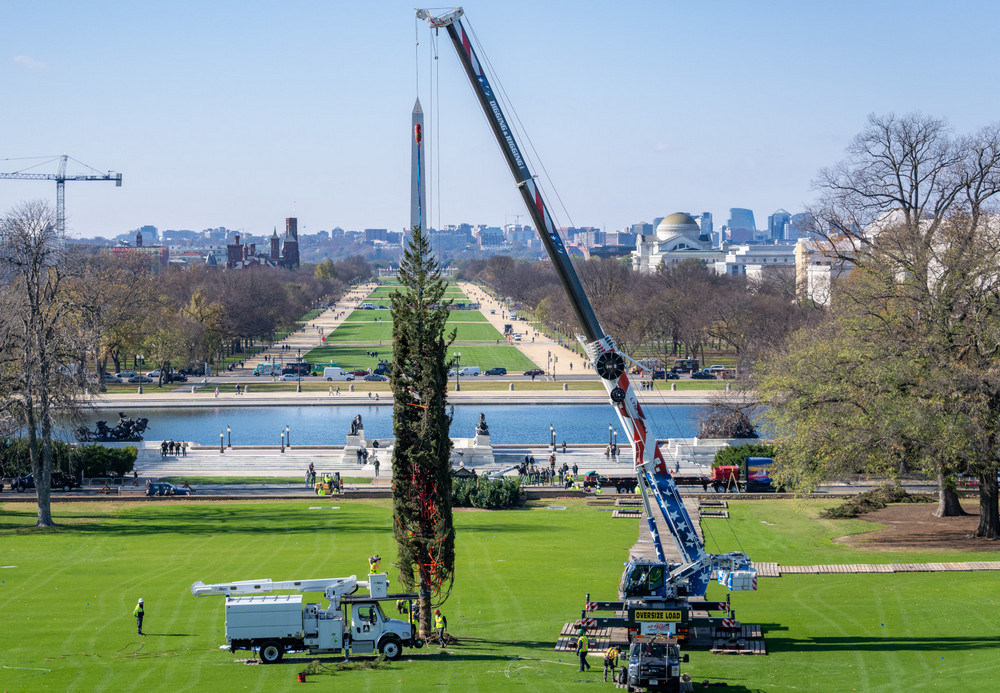 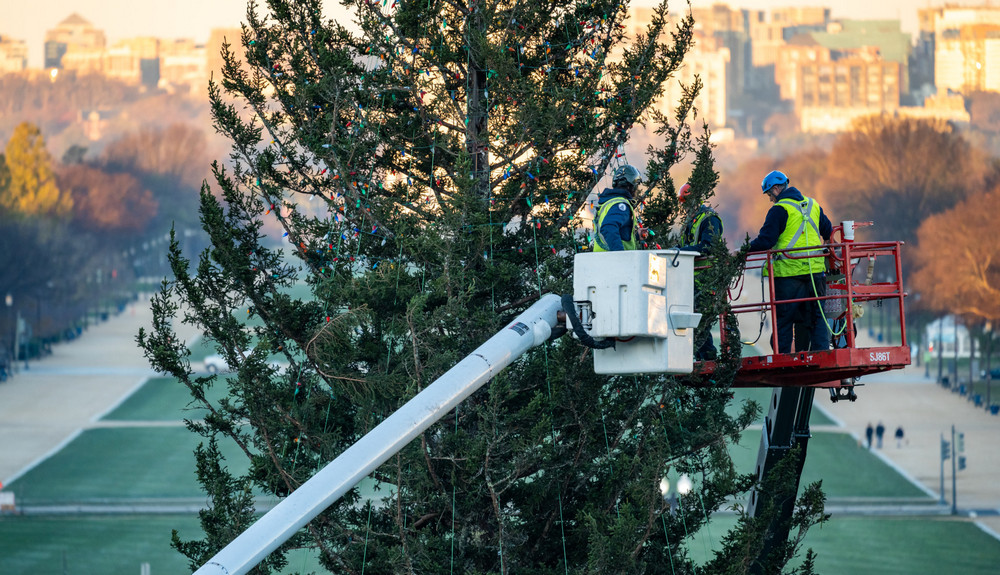 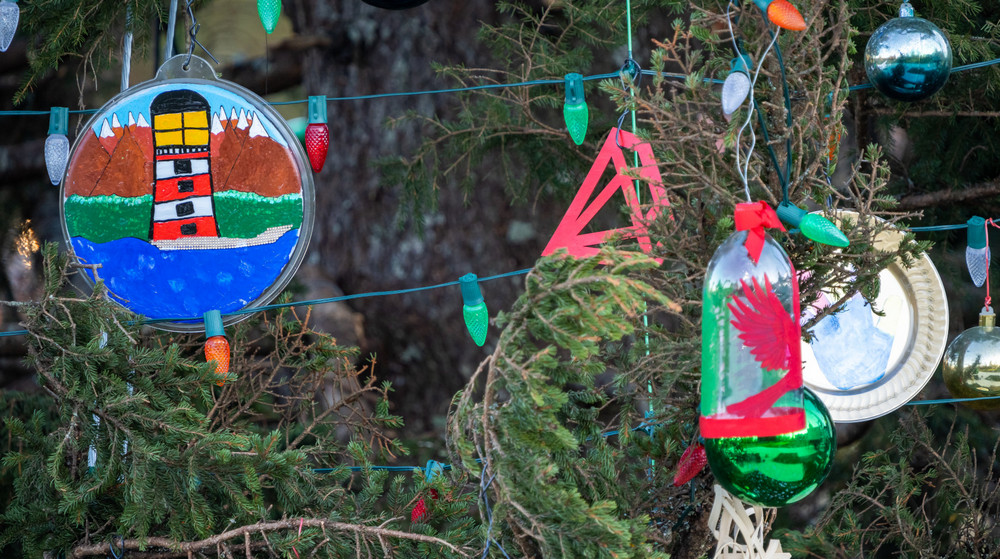 The tree is always decorated with home-made ornaments from each state. This year North Carolinians sent over 7,500 to DC to adorn this and other holiday trees at the Capitol.

UPDATE This afternoon I visited the tree and got photos like the one below of the decorations: 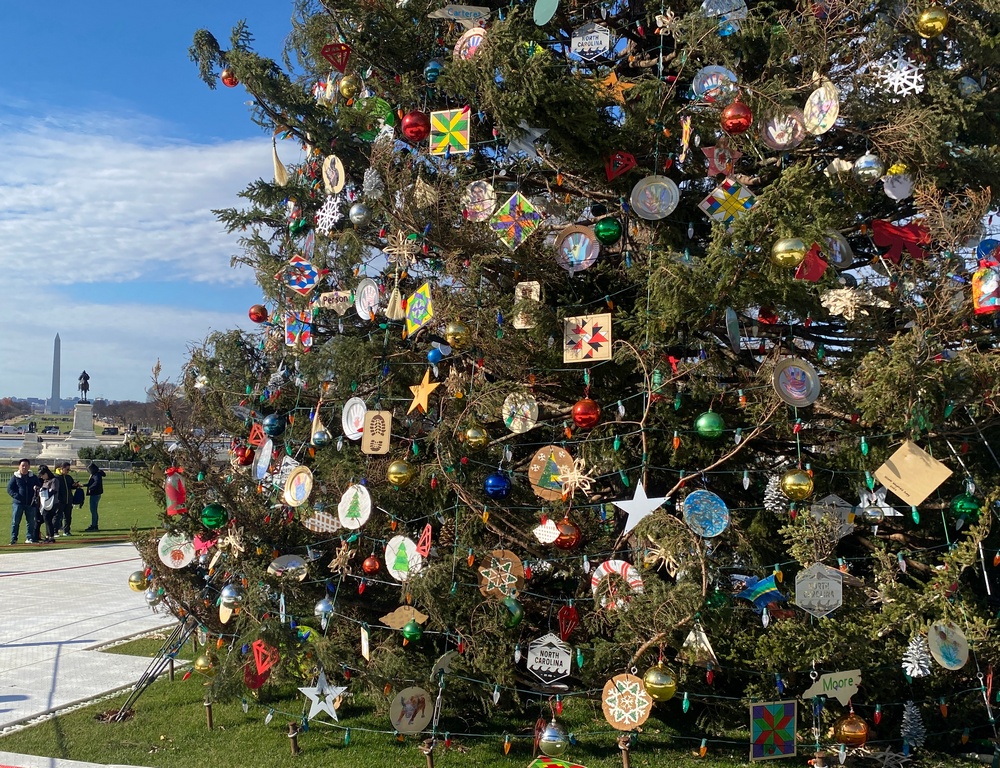 You can watch the whole lighting event here, with speeches and music and at about 39:40 the tree-lighter is introduced by Speaker Nancy Pelosi as “our VIP of the evening.” He reads his winning essay in the contest that chose this year’s lighter.

The Tree has Followers