After Too Many Years, A Father and Son’s First North American Rock Garden Conference

Half of my childhood was spent listening to my mother tell my father he didn’t need any more new plants. Mom was smart, persistent, usually right, and she got her way a surprisingly high percentage of the time, but somehow Dad always managed to acquire more new plants for his garden, which was a rock garden that stretched across a small hill in the yard. Many came from obscure mail-order nurseries. This would have been back in the 60s and 70s and I have no idea what nurseries these were, but he probably grew most from seed he ordered off the North American Rock Garden Society seed list.

I loved Dad’s rock garden. The rocks were artfully tucked into the hillside forming walls, steps, and ridges that curved into and among each other. There was a little dry creek that tumbled down the left side, and all of it was filled with a bunch of interesting and beautiful plants. I don’t remember most of them, but I do recall carpets of creeping phlox, pinks, various sedums, a smattering of dwarf conifers, and ‘Hampshire’ Geranium, or at least a plant that looked a lot like it. Few true alpine plants, but what are you going to do in hot and humid Cincinnati, which sits mid-continent at 800′ altitude, suffers a thousand freeze/thaw cycles in a typical winter, has no winter snow cover to speak of, and is notorious for its sticky clay? Despite all this, Dad made it work. It had the look and feel of a true rock garden and it was beautiful. 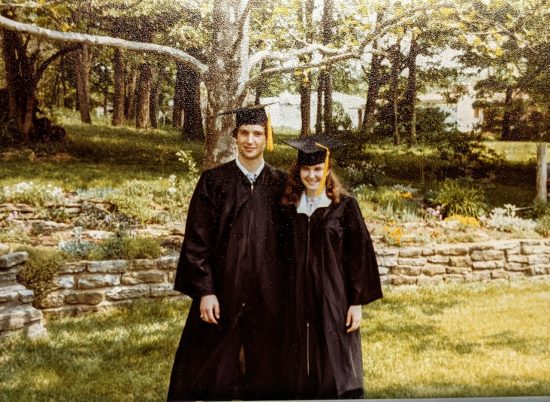 Dad’s first rock garden appeared in the background of many photos of kids at various high points of growing up. Here I am with my girlfriend, Michele, after graduating from college. Michele is now my wife of–if my math is correct–38 years.

Virtually everyone else in the neighborhood landscaped their yards in the well-trimmed, conventional style of the day, which, for virtually all of middle-class America, meant yew or juniper foundation plantings, possibly a handful of annuals by the front walk,  and maybe a crabapple or a magnolia somewhere in the yard. So Dad’s ambitious and imaginative rock garden, which consumed a healthy chunk of his real-estate, was unique. Neighbors and visitors all liked it. As for me, I believe that early glimpse of the possibilities of plants and gardens is what eventually led me–long way around–to a career in horticulture.

A few years after I left home, my parents called to announce they were moving to a “condo.” Condo in quotes because, turns out, theirs was actually a free-standing building that was all but surrounded by woods at the end of a private street of townhouses. Anyway, my first reaction was incredulous: “What the hell? A condo? What about the garden?” The response was surprisingly nonchalant. “Eh, we’ll see. There’s a place I can start one if I decide to.” I’ve always assumed that this must have occurred during a period when, for whatever reason, Mom was holding an unusually large amount of the power. 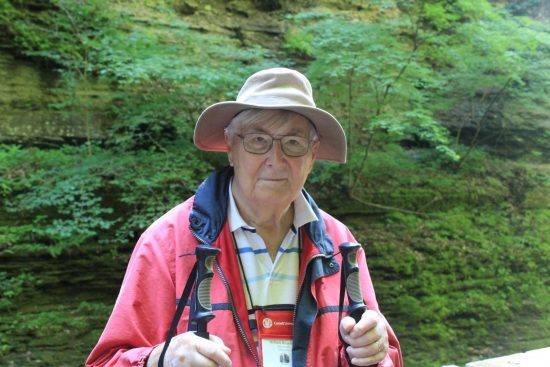 But very soon after the move, the tide must have turned, because a long berm along the face of the woods began to be planted. Probably scraped into existence during construction, the berm was about 100′ long, pretty darned steep, consisted of very heavy clay (probably subsoil) full of tree roots. and, at best, gets a half day of sun. A million rocks were brought in, gathered surreptitiously from construction sites after work and on weekends and brought home in the trunk of a Mercury Sable. Despite Mom’s mantra of him not needing more plants, Dad always managed to acquire more new plants. 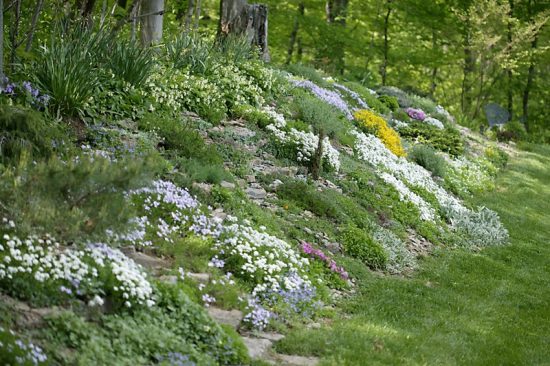 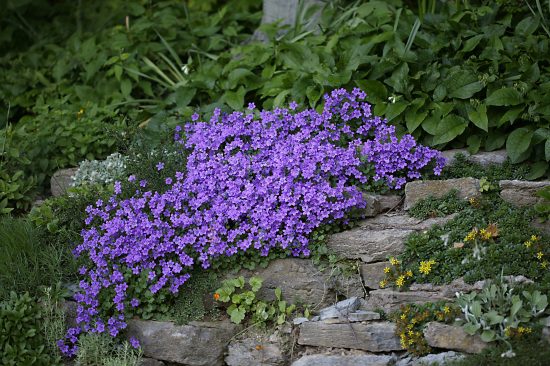 The new owner of the old house had no interest in maintaining the garden, so a few plants were rescued from there but most came from mail-order nurseries or grown from NARGS seed. Soon enough, the garden occupied the entire berm, concluding at first one pond, and then another, and it was quite common for the neighbors to walk down and visit it in the evenings. Eventually, even a north-facing slope at the end of the berm was planted and now features an incredible collection of rare and wonderful woodland species. 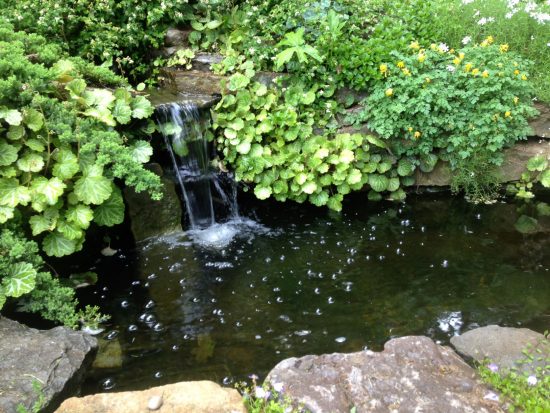 I don’t know why, but Dad never joined the local chapter of the Rock Garden Society. He just did his own thing but as my interest in horticulture grew, I’d help out here and there when I could, and we’d swap plants. We took one memorable mid-winter trip up to Michigan to visit Arrowhead Alpines. Bob and Briggitta Stewart could not have been more hospitable. But. later, as we were happily driving home with a trailer full of new treasures, my transmission blew. Stranded! At some forlorn intersection near Piqua, OH! Well after dark. Way below freezing. This was in the early days of cell phones and I had one, thankfully, so the family was mobilized and multiple rescue missions were launched from the Queen City. Eventually, Dad, me, plants, and even my truck, all got home safely.

More recently, I’ve been fortunate enough to attend various horticultural conferences and tours and my Dad has expressed an interest in joining me but, unfortunately, for quite a few years my mom’s health required that he stay home as a full-time caregiver. Mom passed away in April 2020, just as COVID shut everything down for two years. So this winter, when we saw a notice for the NARGS’ Annual General Meeting (they call it the AGM) in Ithaca, NY, we jumped at the opportunity.

First off, “Annual General Meeting” is simply an incomprehensibly underwhelming name for what the event actually is. NARGS must change this, because it literally sounds like a meeting made up of more meetings. Nothing could be further from the truth. We toured five incredible private gardens we would never get to otherwise see, attended a botanically focused tour of a stunning gorge, toured the botanical garden at Cornell University, heard talks from some of the world’s top plant experts, all of which featured stunning photos of some of the world’s most beautiful and remote places, and, best of all, for four days were surrounded by knowledgeable people who shared our same passion. As you would imagine, it was an older group. I would guess the average age somewhere around the upper 60s, and that’s probably being generous, but everyone there shared a youthful desire to learn. There was a lot of laughter on the bus rides, and, although some of them were rather long, the chatter never stopped. 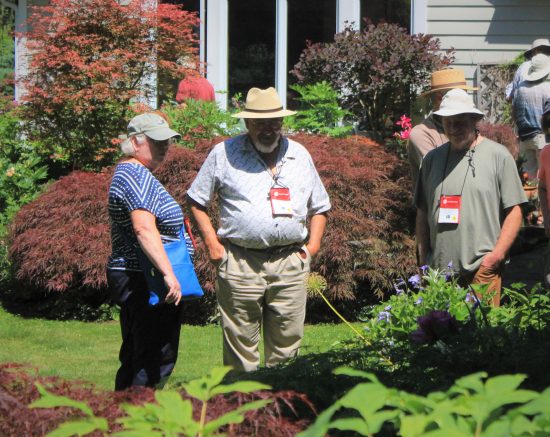 Where else but at a NARGS meeting can you hang out with and learn from such literati as Panayoti Kelaidis?

And of course there was a plant sale. A large room filled with botanical treasures and, although we both loved Mom and miss her terribly, and although we both heard her in our heads telling us we didn’t need any more new plants, it had zero effect. 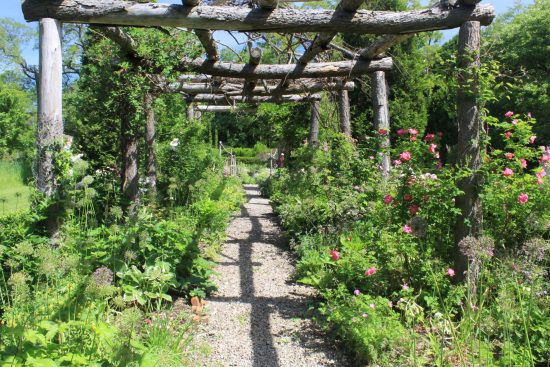 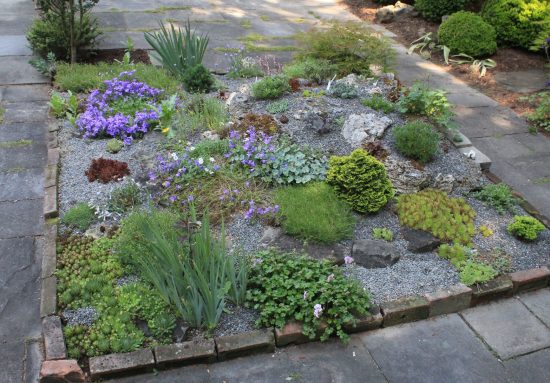 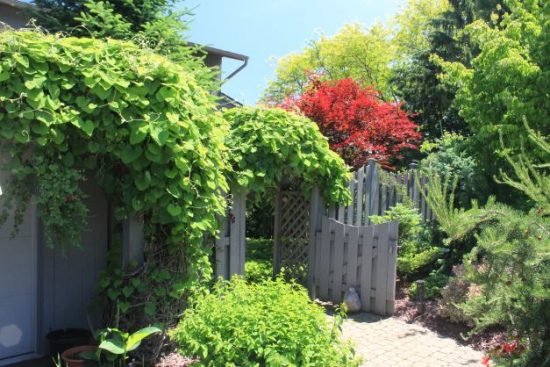 Tours of incredible private gardens are par for the course. 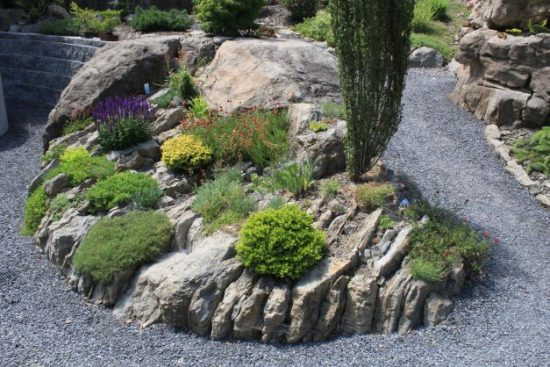 They kept us busy. Each day started at 7:00AM and ended after 10:00PM. It was a lot for all those old people, and even me. We had originally planned to run up to Rochester and then Buffalo to see a few gardens and Niagara Falls on the way home, but by Thursday afternoon we were exhausted and heading home. 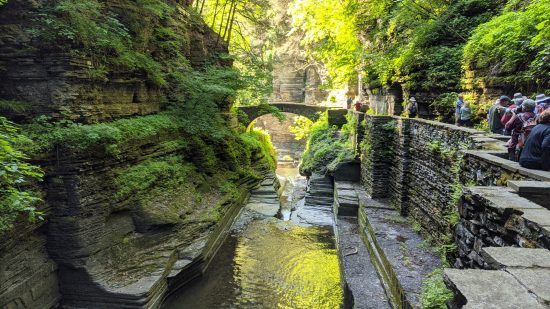 A tour of Treman Gorge led by a local plant expert was beautiful and interesting. Such diverse flora!

I hope this is the first of many such excursions for us. I would urge readers to look into such offerings from NARGS and other plant societies. They are reasonably priced and the bang for the buck is off the charts. It’s a great way to bond with family or gardening friends, but it’s easy to make new friends at these things too. I wouldn’t hesitate to go alone. 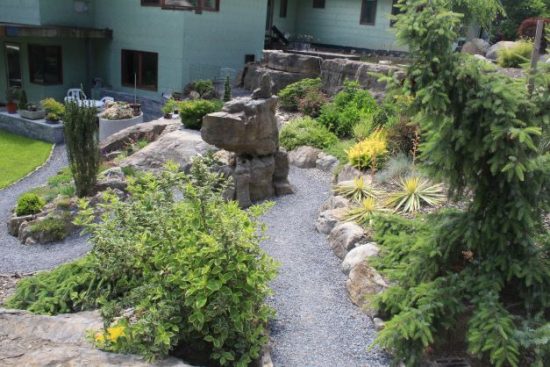 This garden was actually excavated. Earth removed to reveal the bedrock below, creating crevices and niches in which to grow plants. 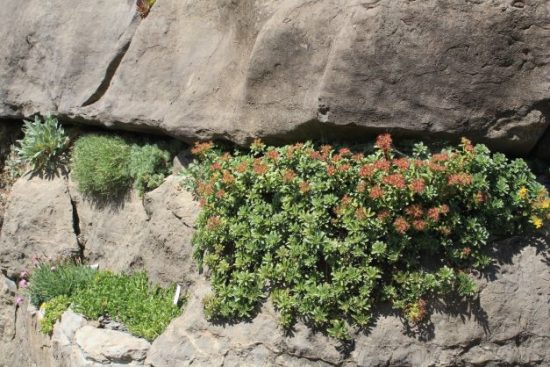