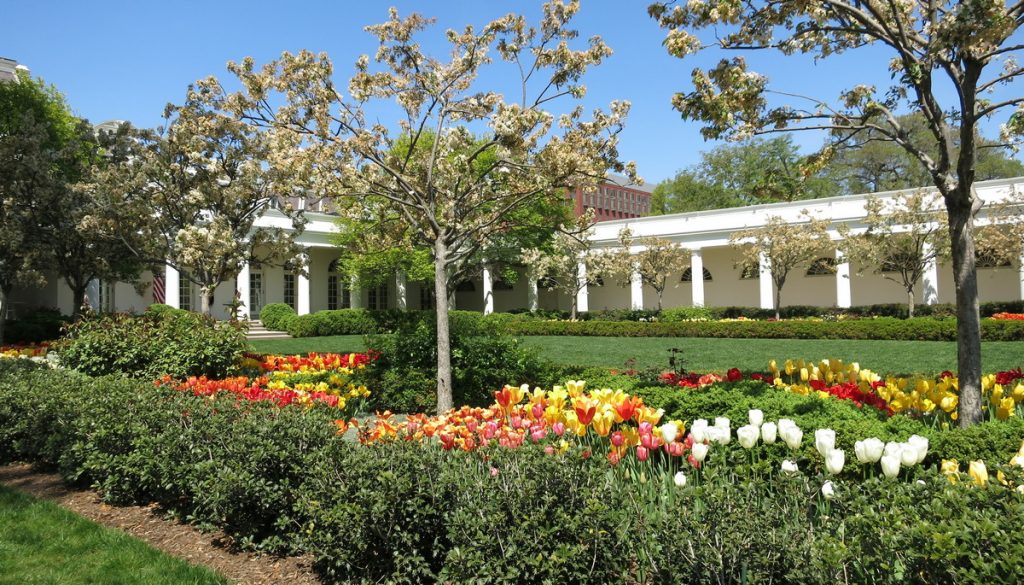 The last time I blogged about a visit to the White House Gardens was in 2010 ( photos here) and my last visit was in 2016, when I took the photo above. Let’s call it the pre-Melania Rose Garden.

Then during 2020 the Rose Garden was changed (pick your descriptor – “upgraded,” “ruined” or everything in between), and I covered the hew and cry about that in several posts: “Even Garden Writers who Hate Trump are Defending the Rose Garden Upgrade,” followed by “The Pointless, Inaccuracy-Laden Petition to Restore Jackie Kennedy’s Rose Garden” and “Rose Garden Meets Politics and Misinformation on Twitter.”

All of which hue, cry and misinformation continues to this day, even promulgated by such a respected source as presidential historian Michael Beschloss, via his Twitter account.  From CNN: “Beschloss on August 7 tweeted his ongoing disgust at what he dubbed the ‘evisceration’ by Trump of the most iconic garden in America.”

So naturally when the White House Garden Tours made a post-covid return last weekend I was eager to see for myself. (I had responded to one angry-at-Melania commenter here that I’d go see for myself and report back. Promise kept!)

So above and below are the best shots I could get of the Rose Garden, which is never open to the public on these otherwise “open garden” days.

(Readers, I tried my best to get a press pass to go INTO the garden so I could photograph it from there. A seasoned White House Press Corps friend told me I just had to get my request forwarded to the White House from my Congressman’s office but that didn’t work – and he’s the Majority Leader!) 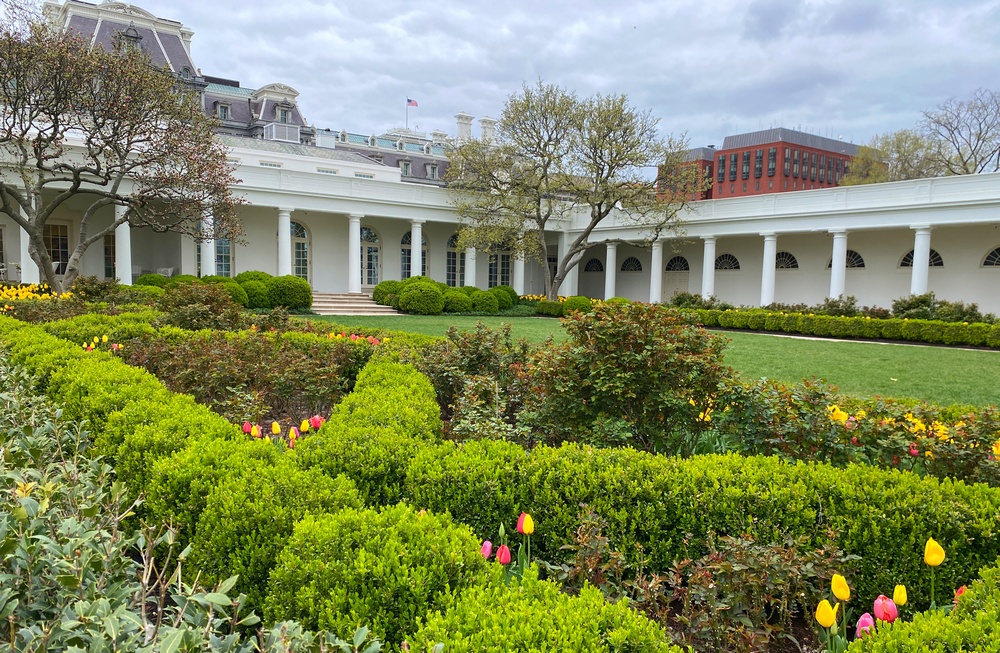 So what do we see here? The roses are NOT all gone; they’re here, tucked into the boxwood maze, and will bloom next month. The crabapples ARE all gone, though, and I think that’s an improvement. At least we outsiders can see into the garden better now.

I listened to a National Park Service docent in this spot and noted his characterization of the crabapples as having root rot and creating too much shade for good blooming by the roses.  He also referred to the changes as on the “wish list” of the Park Service (which cares for the property) for a long time. (See, it was announced by Melania Trump, not designed by her, fer crissakes.) 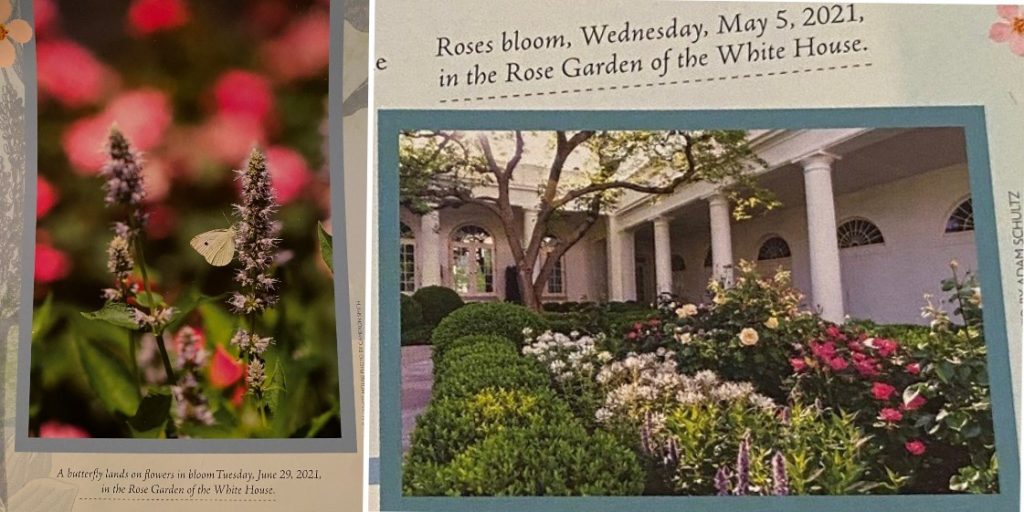 Above, photos of the post-Melania Rose Garden in the tour brochure. 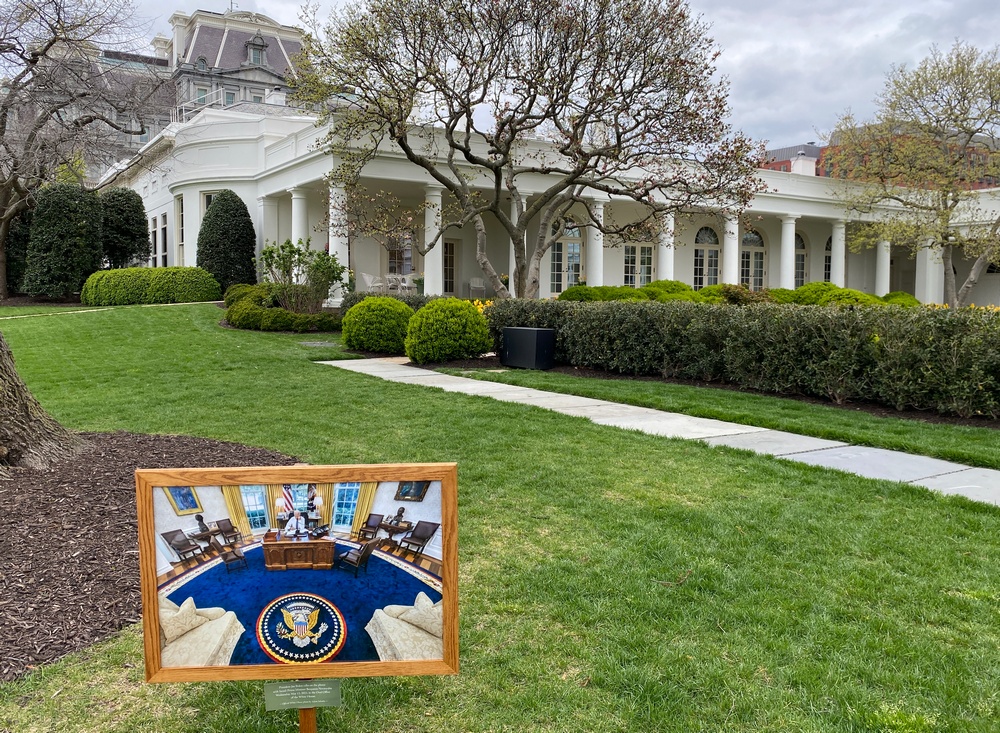 I love that during the spring and fall White House Garden Tours, photos and signage help tell White House stories, including this one about the Oval Office. Immediately in back of the sign you see the oval bump-out behind a conifer, demonstrating how an oval room fits into an otherwise right-angled building.

Another Melania rumor, one I”d heard from many local gardeners, is that Michelle Obama’s vegetable garden had been destroyed. But here it is in all its glory!  (We saw evidence of its survival soon after the Bidens moved in when Jill Biden sent a basket of produce to Michelle Obama.) 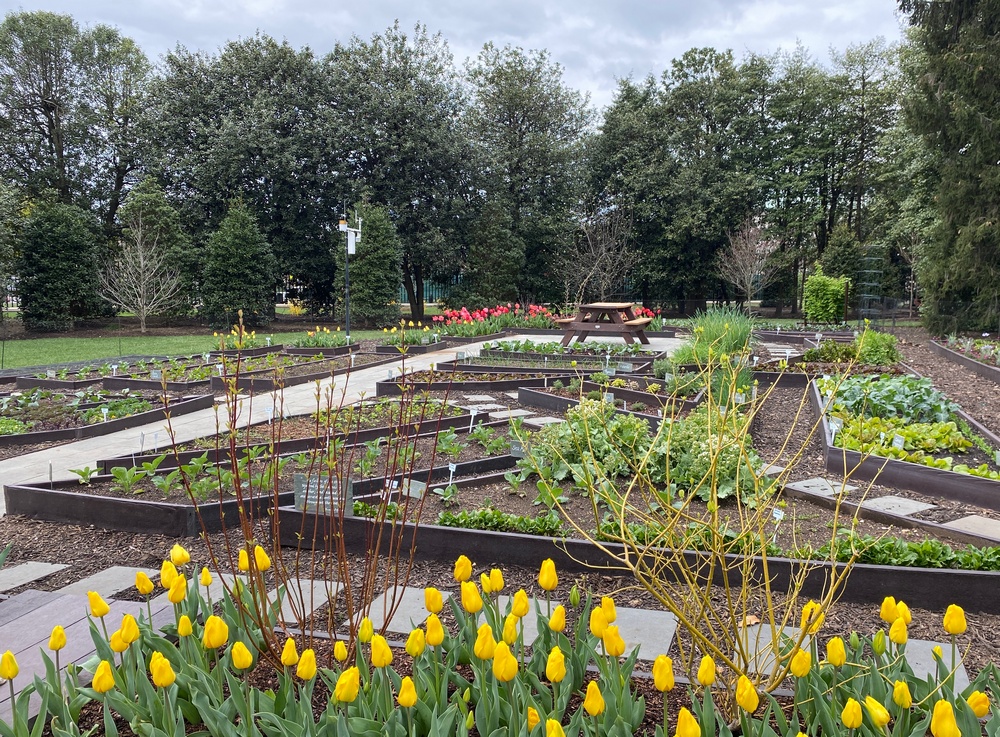 The beehives are still there, too. 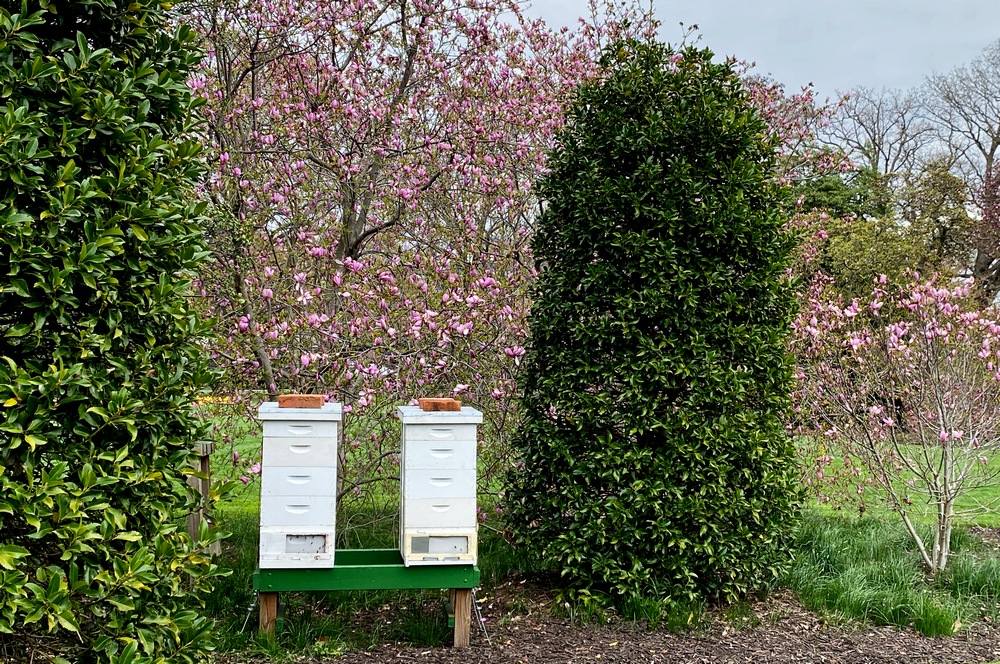 When I lasted visited, this fountain was surrounded by Knockout roses, which DO appear to be gone.  They’re not historic, of course, and are SO common, I doubt they’ll be missed. 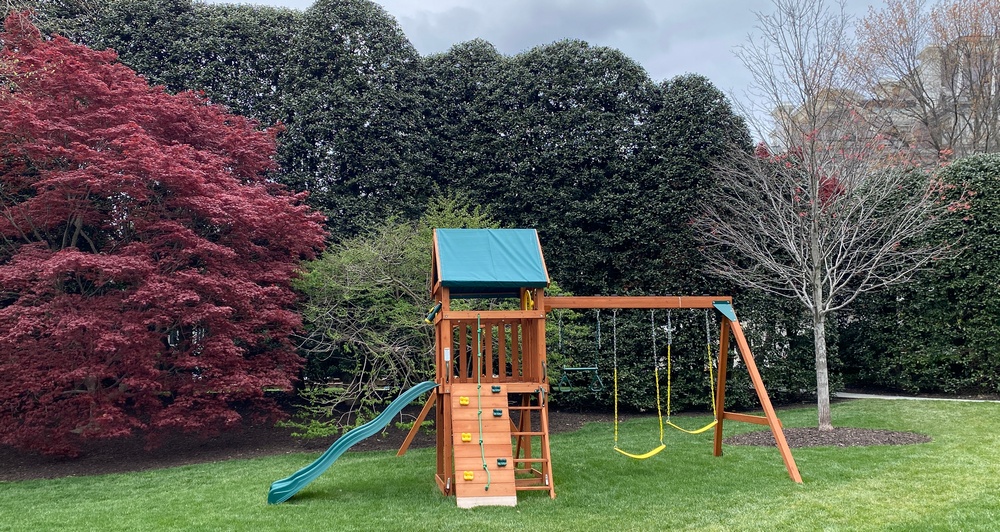 Play equipment installed by the Obamas is still standing, ready for the next presidential children or grandchildren. 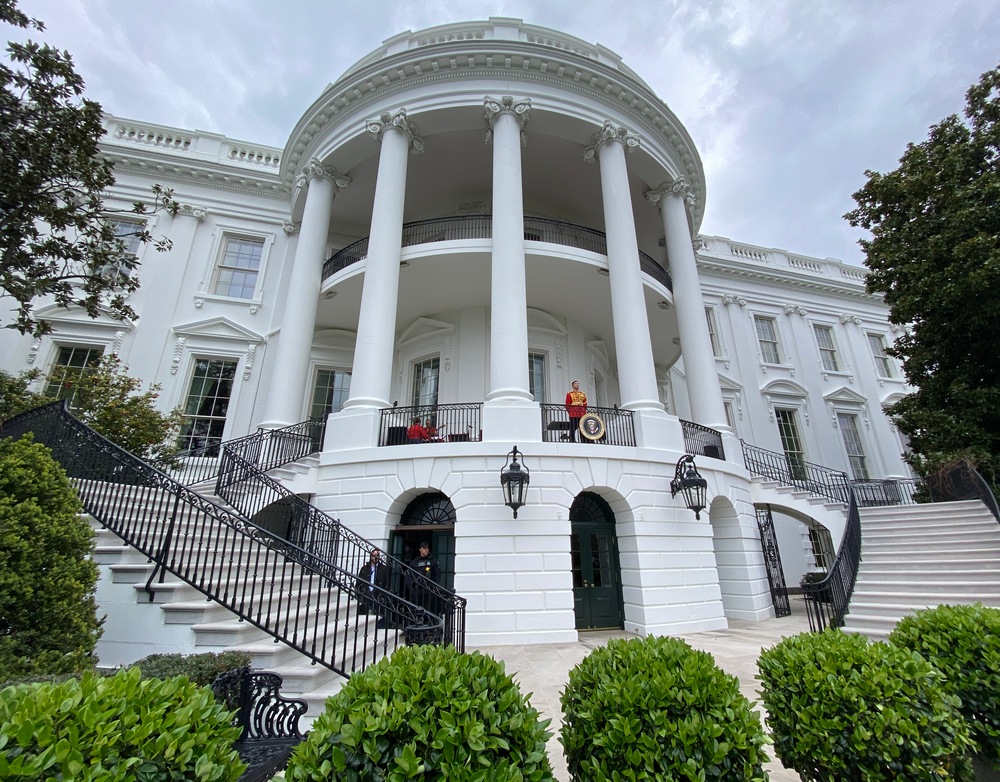 One change I liked was moving the military band from a corner of the grounds to this prominent spot on the South Lawn balcony. The red uniforms look splendid against this grand backdrop. 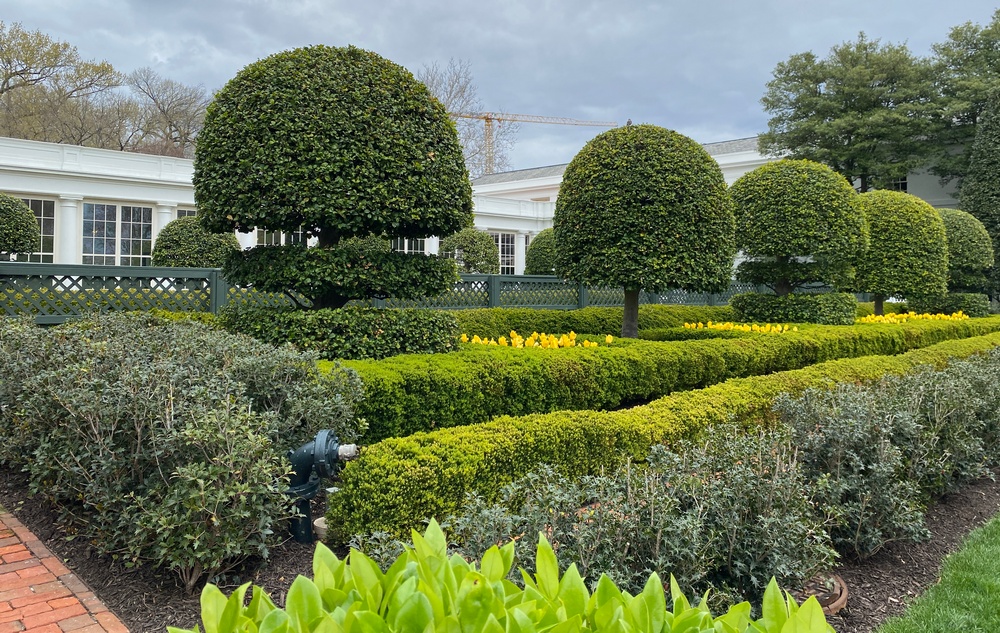 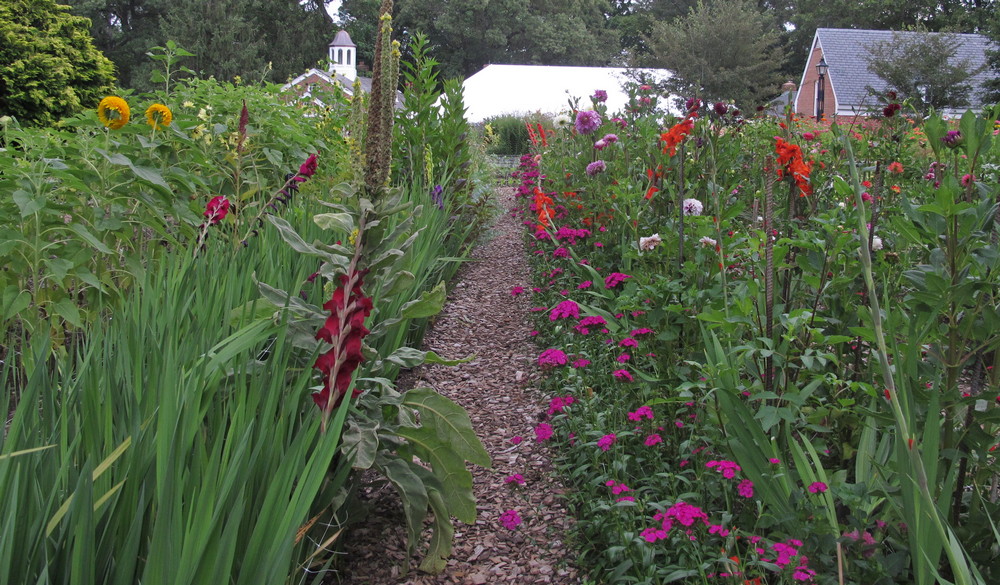 I don’t think the news of any Biden-era addition to the gardens has been reported so I was surprised to see this tidbit in the visitor’s brochure:

I saw no signs of the new garden (which could also be called the Pollinator Garden) but it wouldn’t look like much in early April, anyway. I might have to go back this fall to see it even begin to look like this full-grown cutting garden at the Hillwood Estate a couple of miles away.