Thanksgiving Day on the National Mall

Suddenly there’s lots more to see and do in the tourist center of D.C., an easy subway ride away for me. And boy, was it ever great to be back on a subway train after all these months. It was off-peak and sparsely populated.

My visit yesterday, on a sunny Thanksgiving morning, was a total pleasure. Here are some highlights for gardeners, especially. 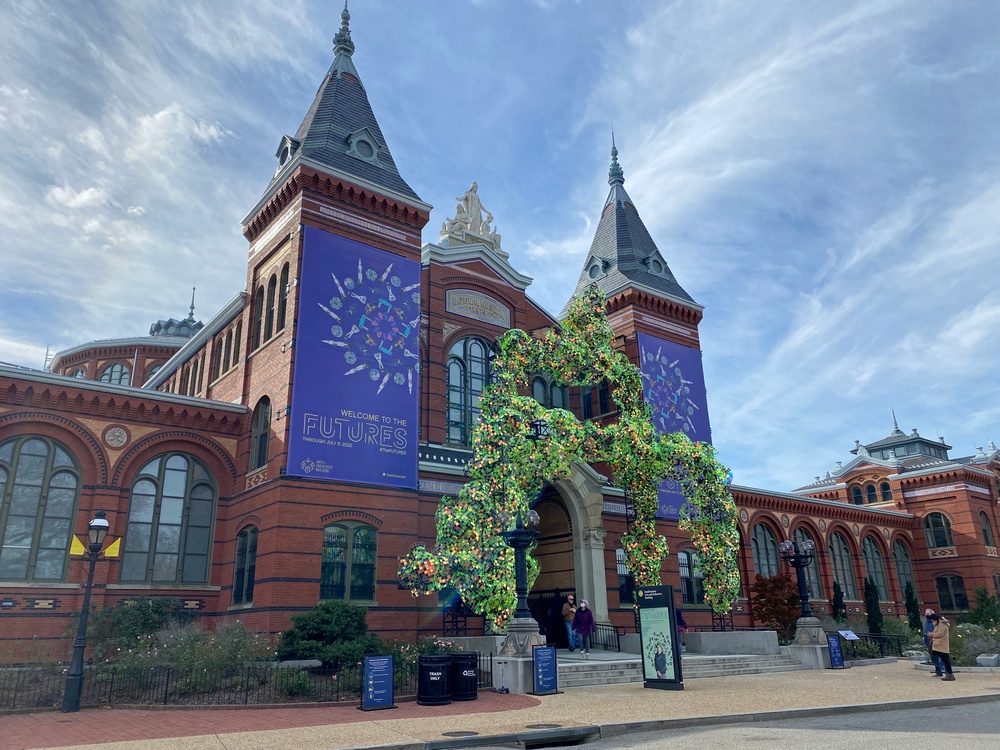 The Smithsonian Arts and Industries Building finally reopened last week and after its 2004 closure to fix structural issues, and the Washington Post’s review of its opening exhibit piqued my interest: “Futures,” on view through July 6, enlists artists, sci-fi writers, engineers, designers and others to envision the world of tomorrow.”  Architectural Digest‘s review made me want to go even more.

I loved the facade by Soo Sunny Park right away but will have to go back to spend some real time with “Futures.” It’s pretty immersive. 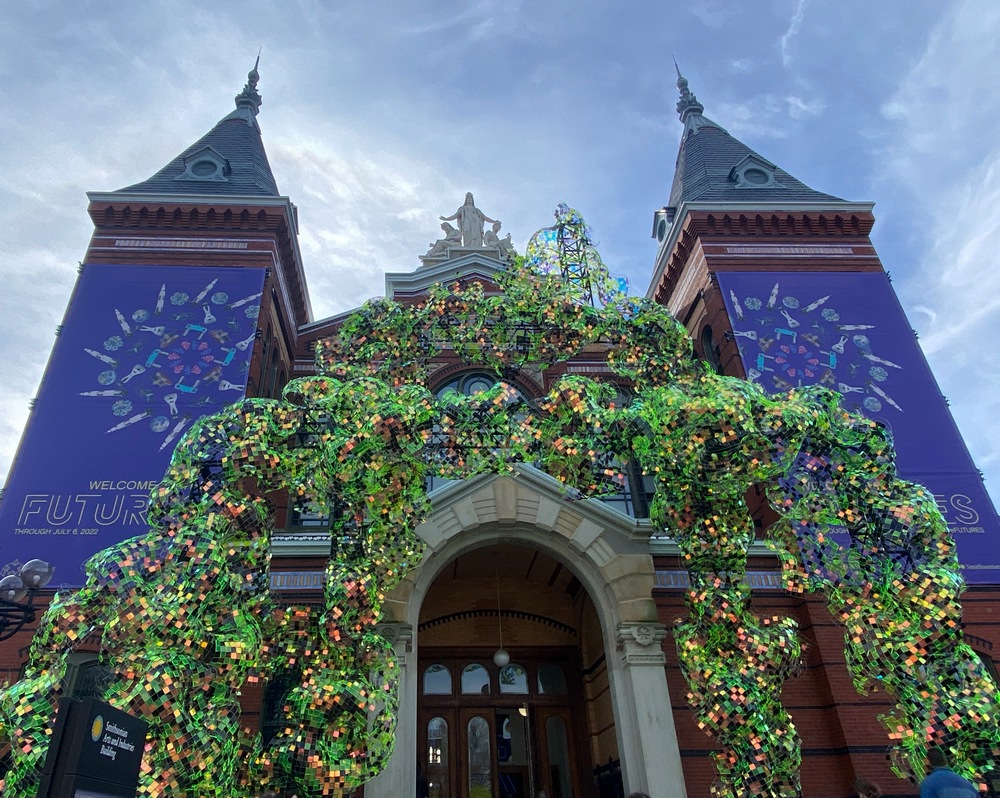 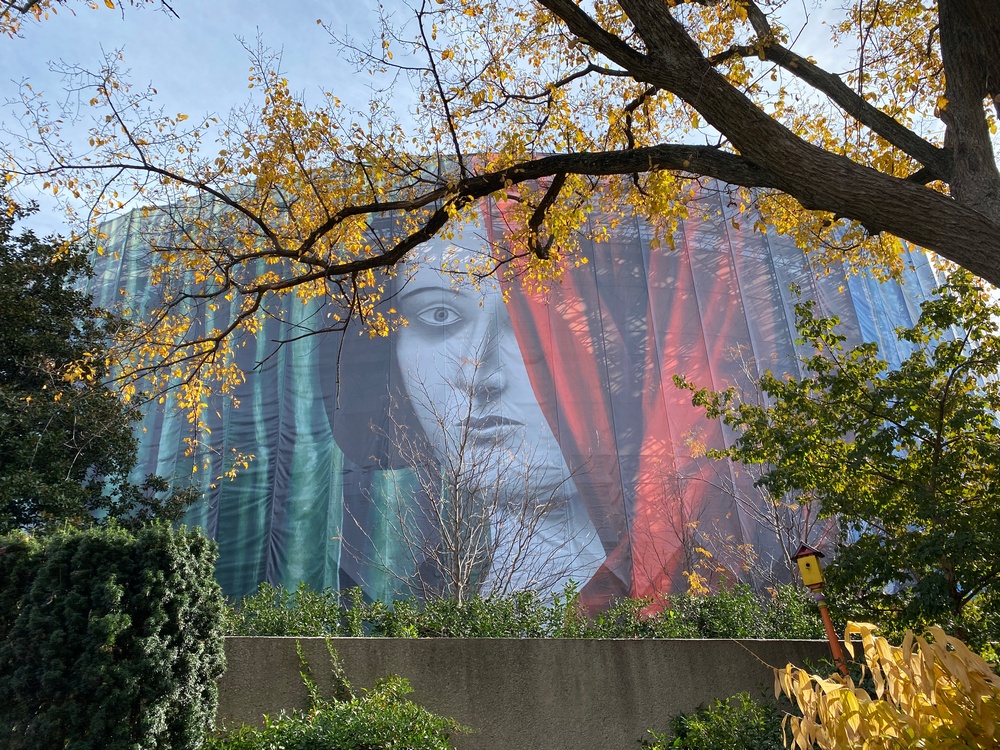 The Hirshhorn is open again but I just admired it from the outside, especially this view of “Draw the Curtain” from the Ripley Garden (a favorite of local gardeners). It was installed in September of this year and described thusly: “The exterior of the Hirshhorn’s iconic cylindrical building is the site of internationally renowned Swiss artist Nicolas Party’s newest artwork. Draw the Curtain (2021) wraps 360 degrees around the temporary scaffolding that encases the Museum building and spans a circumference of 829 feet, becoming the artist’s largest work to date.” Very cool! 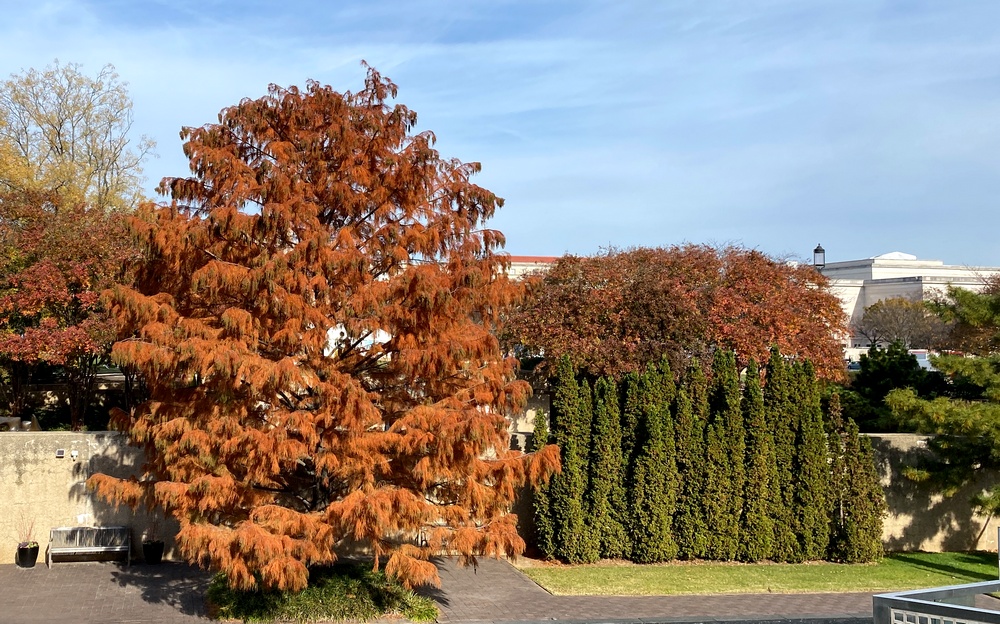 Inside the Hirshhorn’s Sculpture Garden, I enjoyed the great color in what looks like a bald cypress, with other fall colors and an interesting hedge of conifers. (Arborvitae?)

National Museum of the American Indian 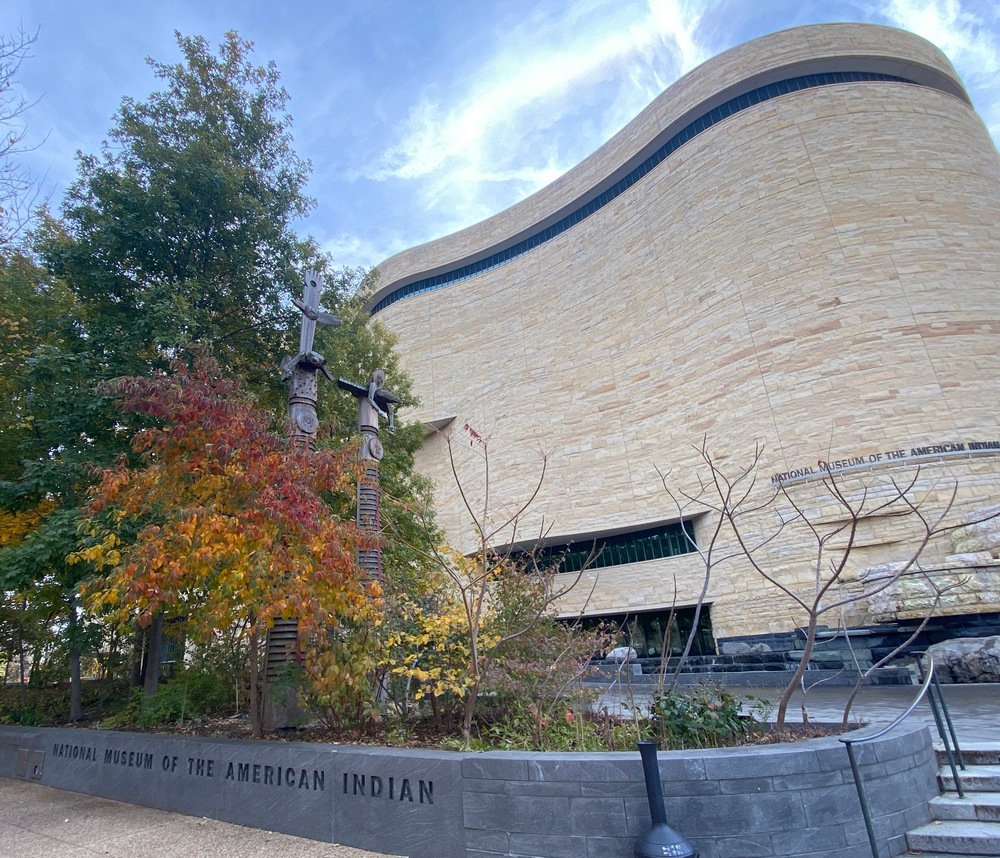 Looking nothing like anything else on the Mall, in a good way in my opinion, is the National Museum of the American Indian. It’s prettiest with a bit of fall color.

The main reason for my trip downtown was the Thanksgiving Day opening of the U.S. Botanic Garden’s holiday train show (called “Outdoor Holiday Display”), which was outdoors for the first time. Last year the trains were cancelled altogether but I say good riddance to the indoor location with its long, slow-moving line to get in. The down side, of course, is bad weather – the trains won’t be operated when it’s raining or snowing.

Here’s what the Observatory’s holiday display looked like in 2018 – indoors. 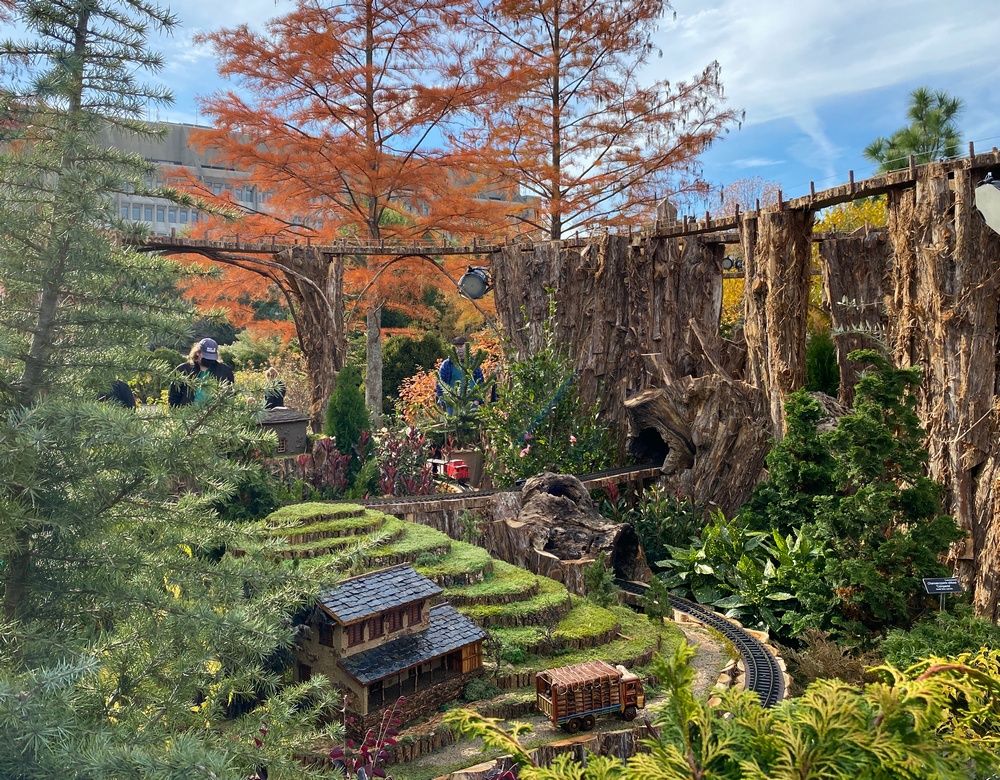 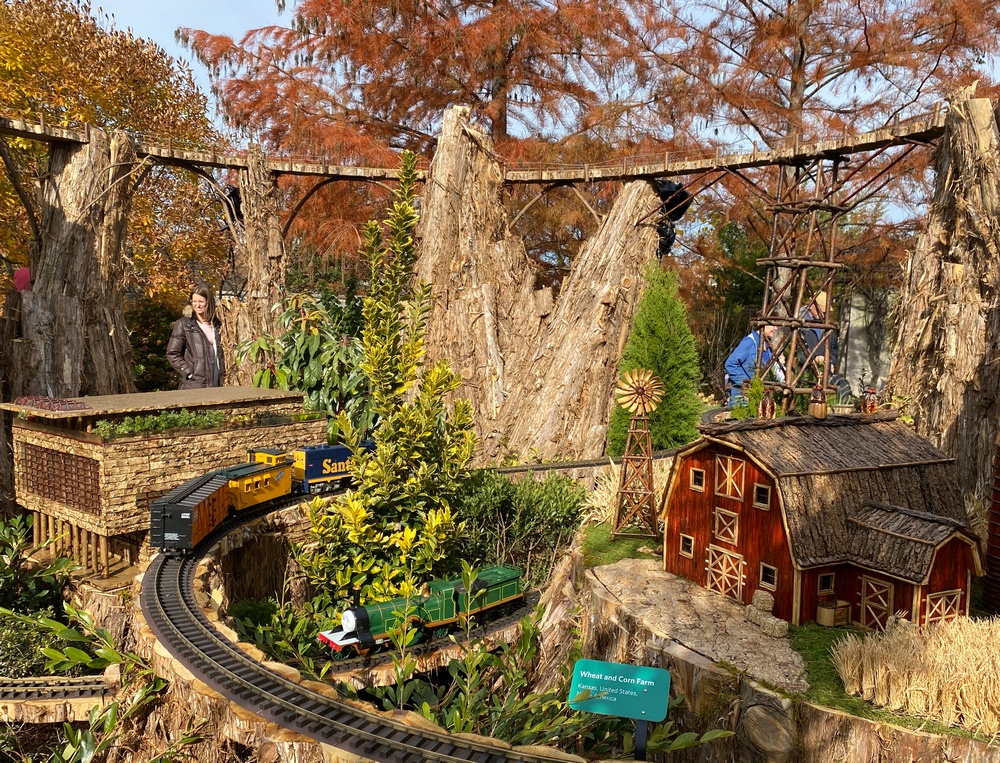 The train display is different every year, built using plant parts in innovative ways. This year’s focus is farming, like the replica of a Kansas wheat and corn farm above. 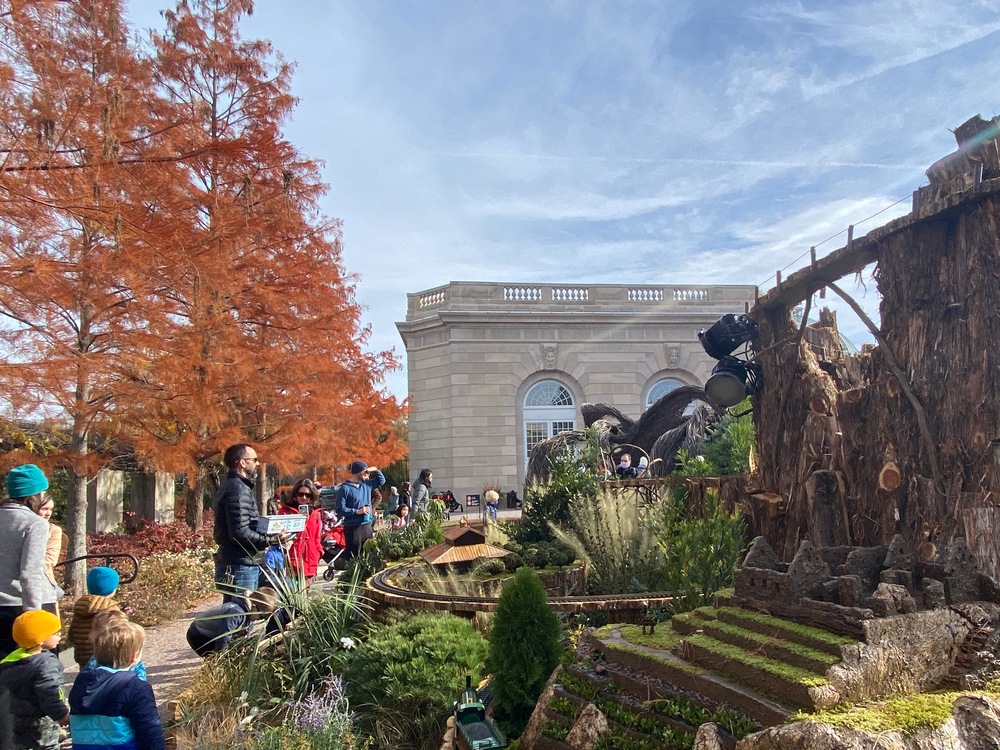 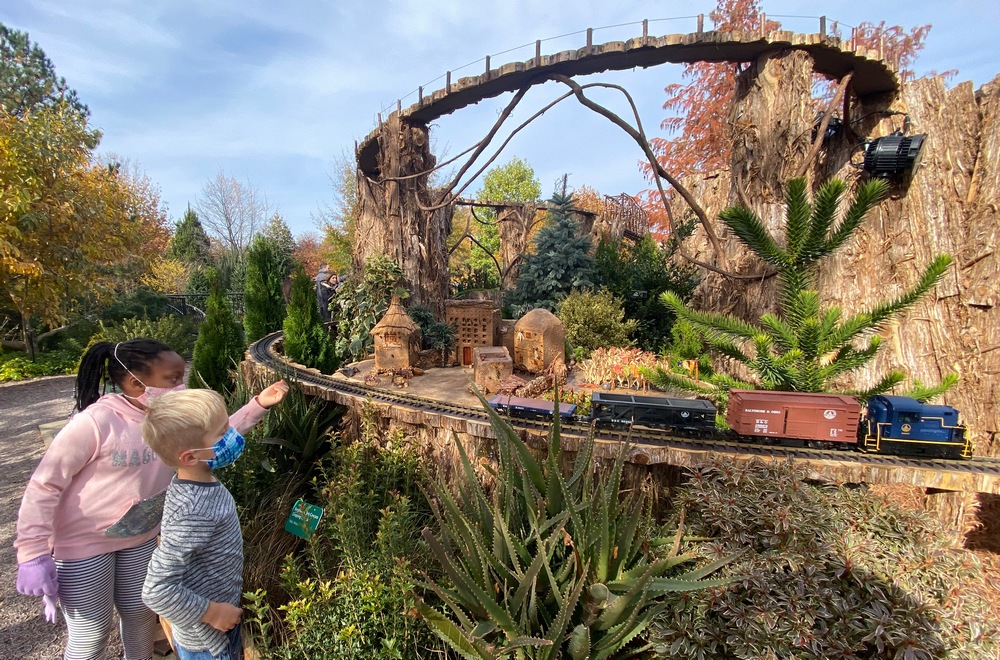 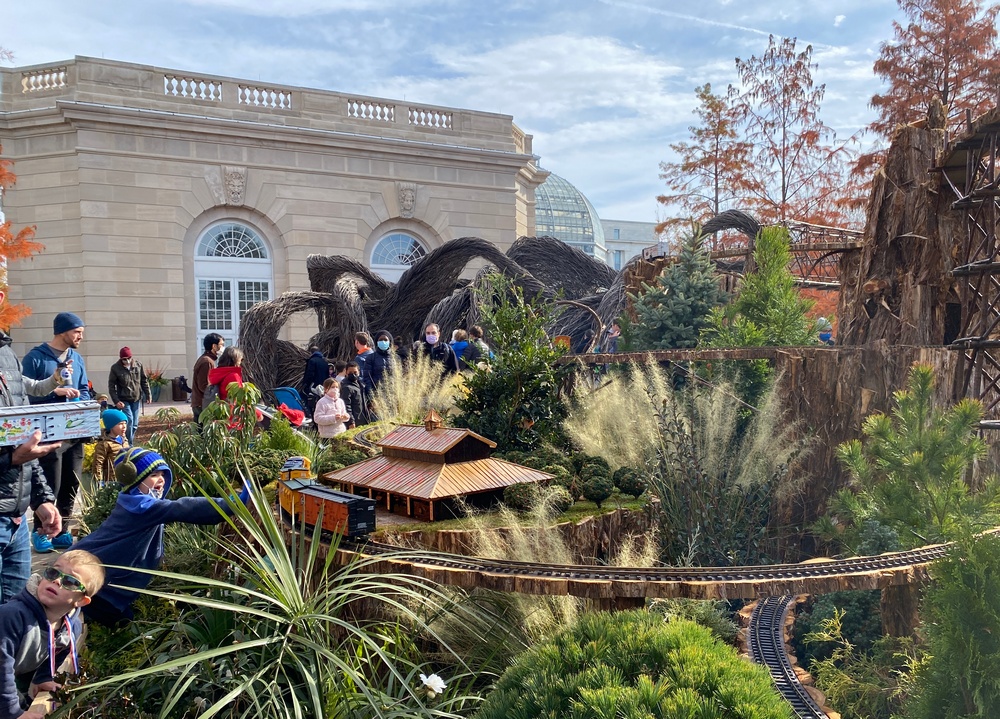 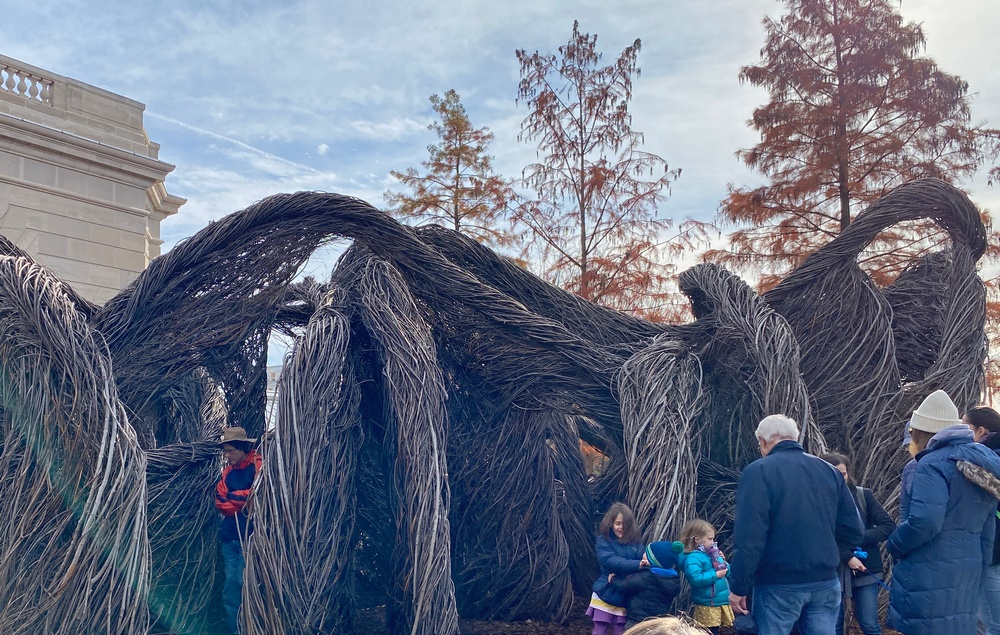 Near the trains is the fabulous stickwork installation by Patrick Dougherty. Constructed with the help of dozens of volunteers in the fall of 2019, the massive work uses branches of Siberian elm, Norway maple, cherry hybrids, and willow. More importantly, it’s tons of fun. 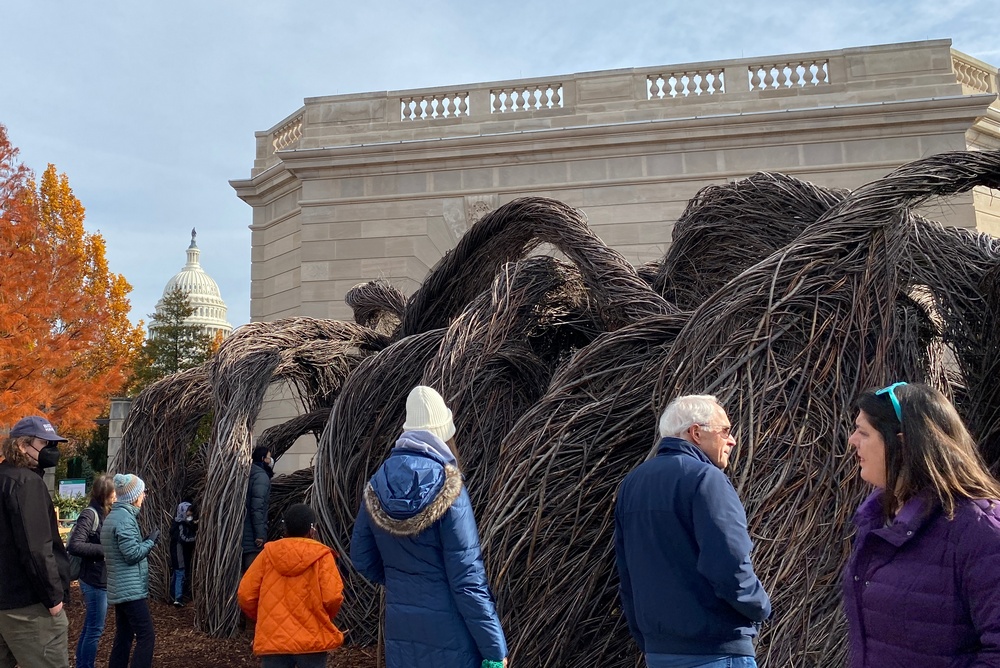 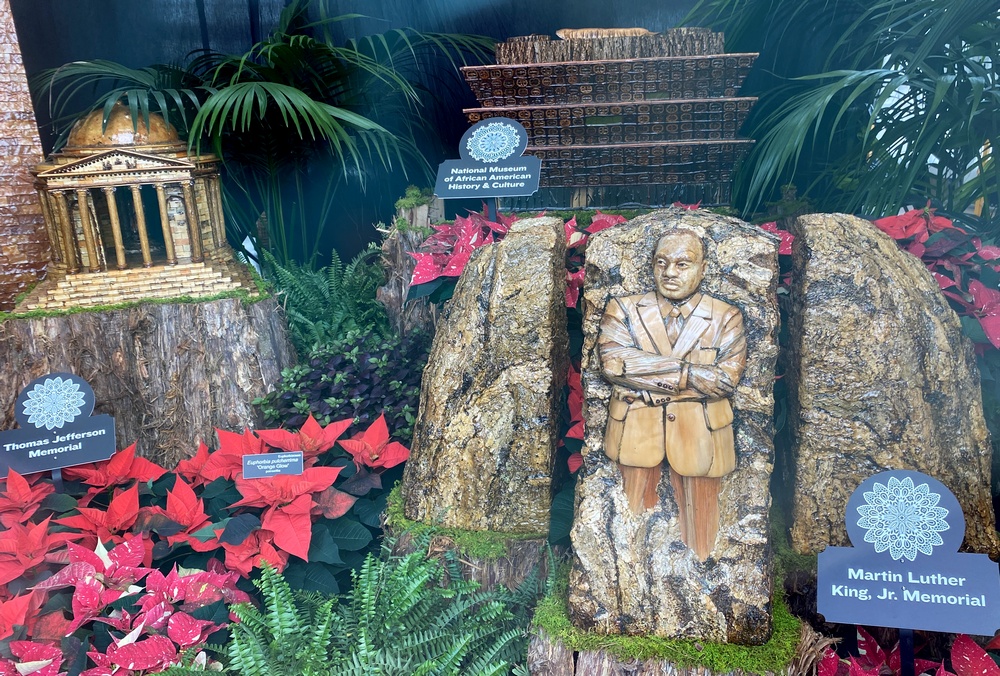 Another traditional highlight of the USBG’s holiday display are replicas of Washington’s iconic memorials and monuments, all made from plant parts. Pre-covid, they were displayed throughout the large atrium of the Observatory but this year they’re just a bit harder to find – in the windows. I imagine they wouldn’t withstand the elements.

Above, one window holds the Jefferson, the MLK and the Museum of American History and Culture. Below, why I hope this part of the show WILL return to indoors next year. It’s pretty magical. 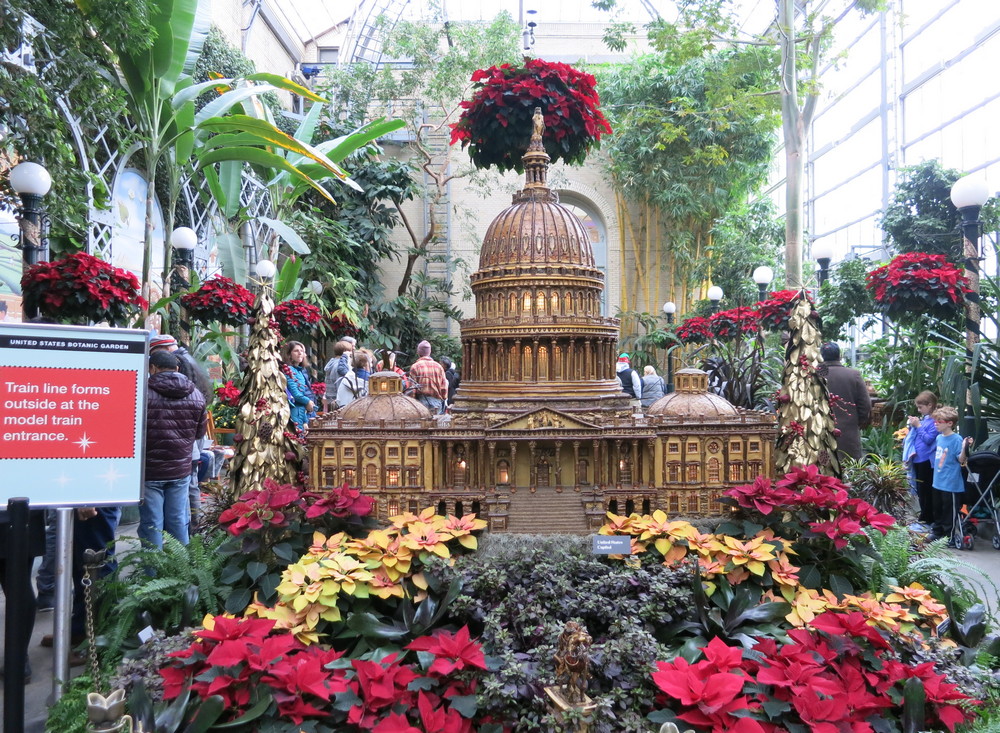