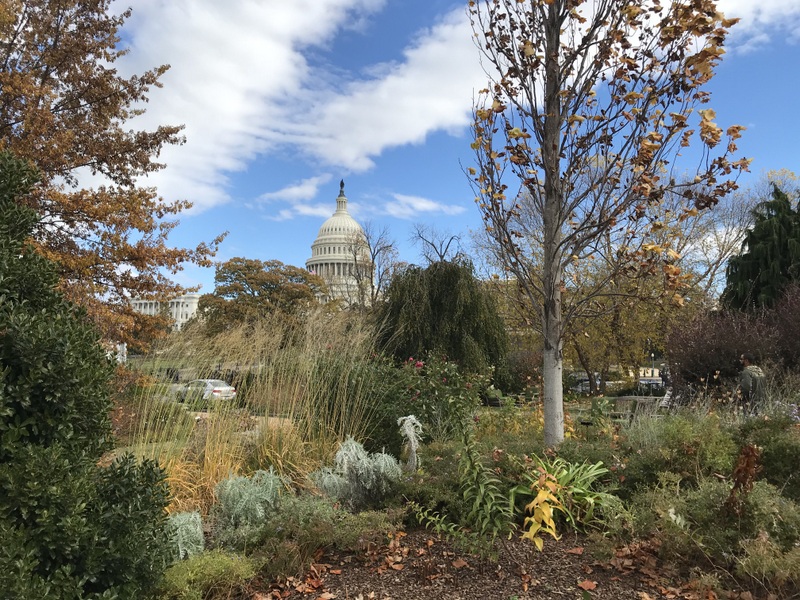 This time of year, visitors entering the U.S. Botanic Garden get this rather somber view of the U.S. Capitol across the street. Inside, from now until New Year’s Day, the views are festive as all get out. I attended a press preview this week before the throngs start lining up for selfies in front of everything photo-worthy. (Visitor details here.) 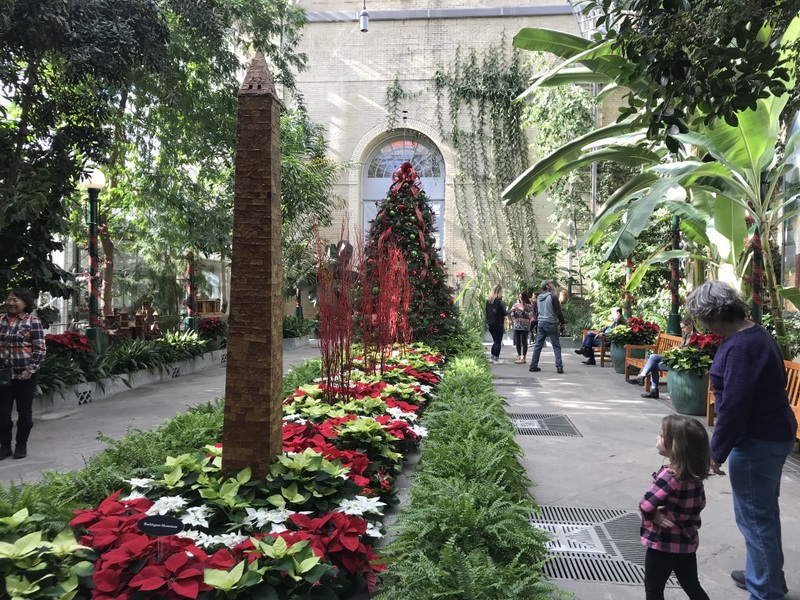 Here in the central atrium are not just the poinsettias and decorated trees you can see anywhere. The highlights are 12 D.C. landmarks, like this Washington Monument replica, made entirely out of plant parts. Click here to find out which plants were used for each one. 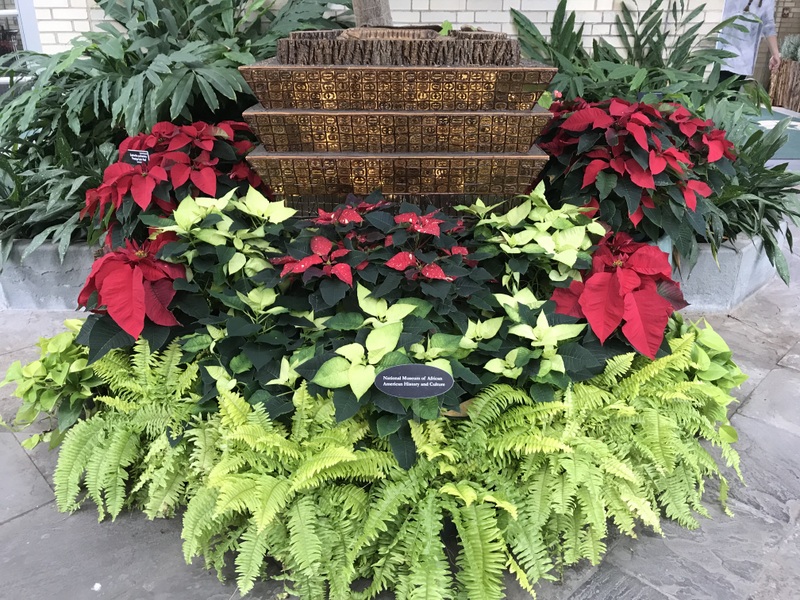 The Smithsonian’s newish Museum of African-American History and Culture is returning for its second year on display. 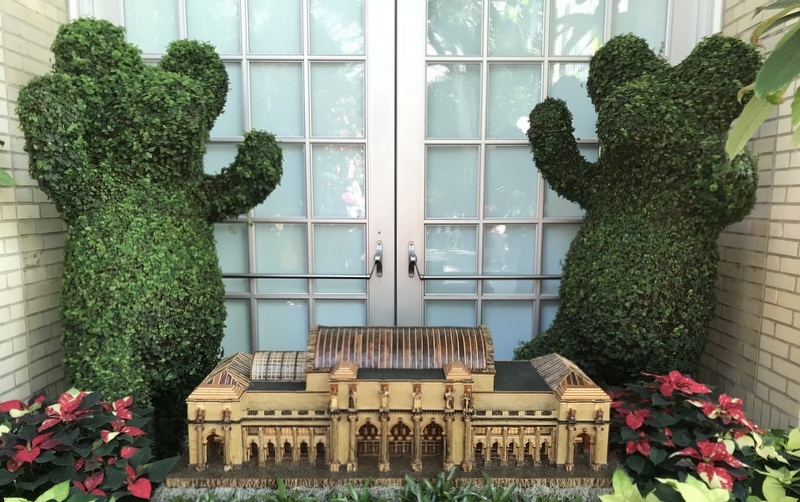 DC’s magnificent Union Station makes its debut here, with topiary bears because who doesn’t love them? 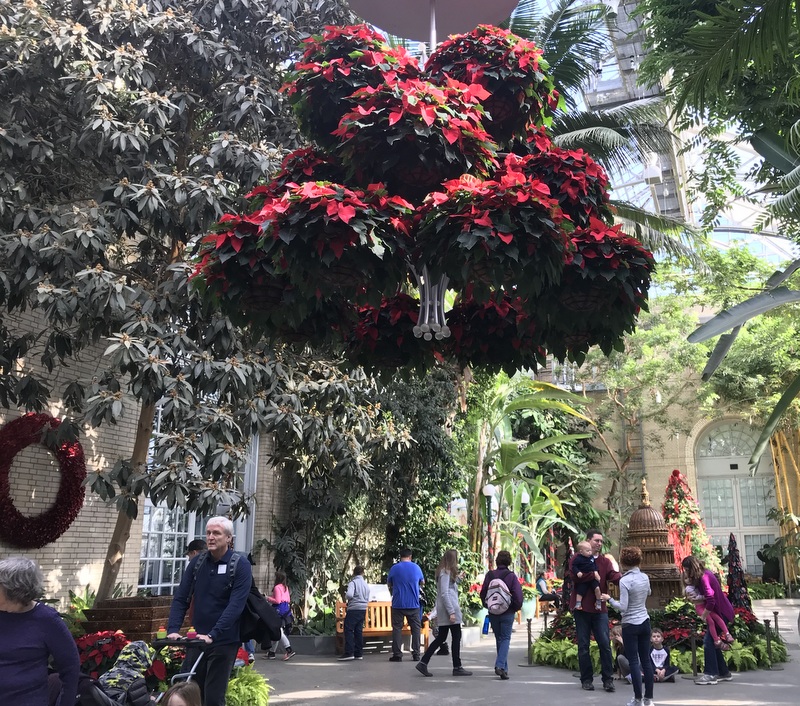 Visitors pose in front of the U.S. Capitol Building replica.

Whole families and twin babies were posing for Instagram or the perfect Christmas cards. 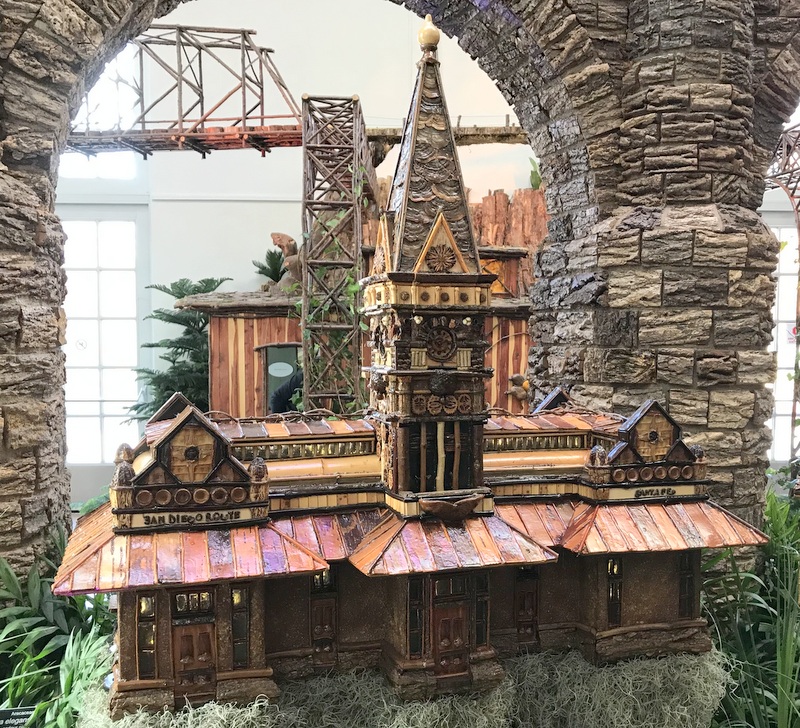 Now for the main event – the train room, which opened for visitors on Thanksgiving Day. This year’s theme – “All Aboard” – celebrates and recreates 29 train stations across the U.S., including this Santa Fe Depot in San Diego. The stations were also made exclusively from plant parts and they’re detailed here in the brochure, which includes photos of the real stations, and a bit about their history. 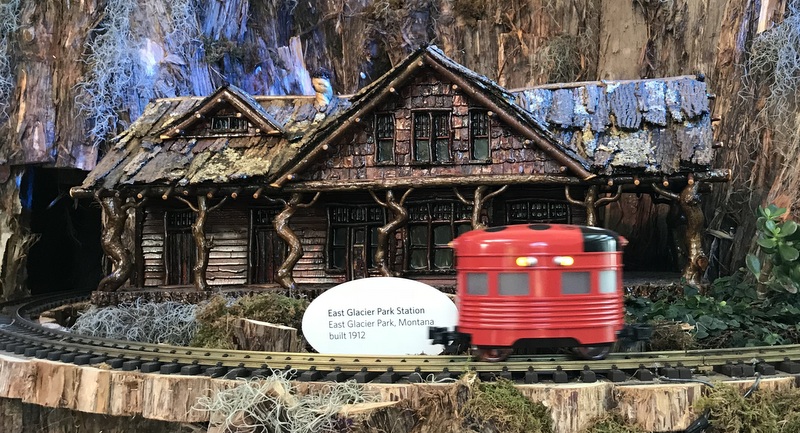 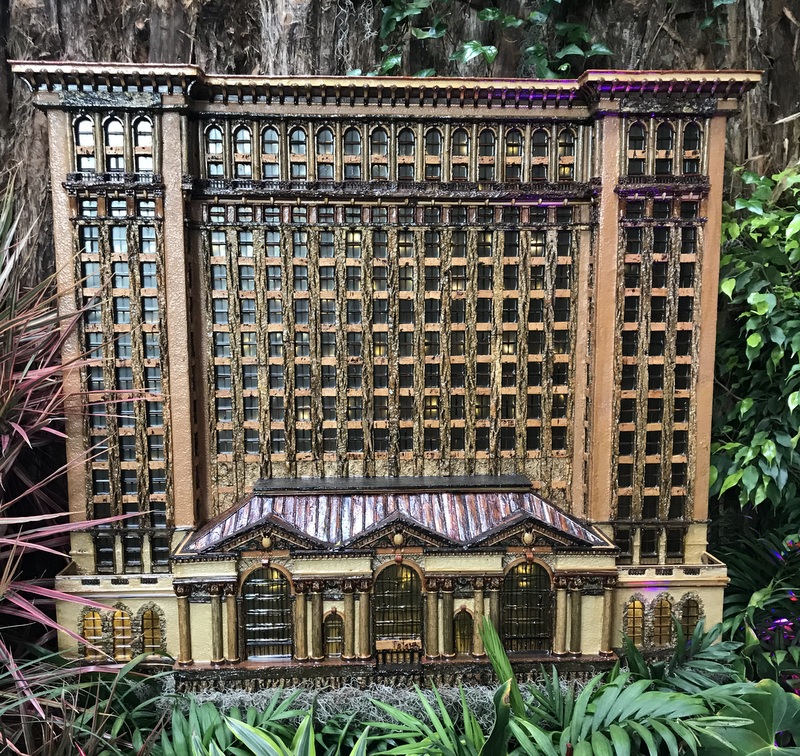 The Beaux Arts Michigan Central Station in Detroit is one of the grandest.

Here’s Cincinnati’s Union Terminal, shown below in real life (from the brochure). 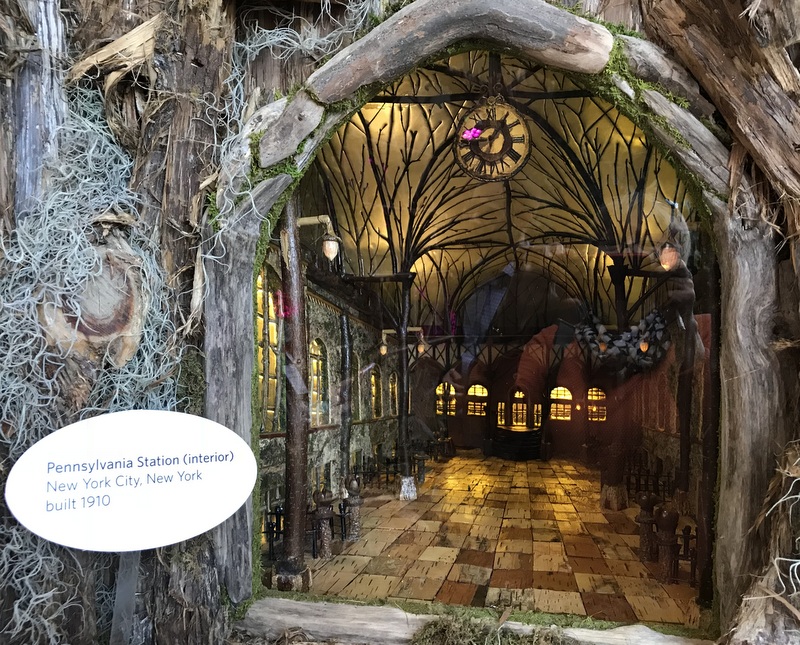 This interior of New York’s Pennsylvania Station, which was demolished in 1963, is a sad memory for many. 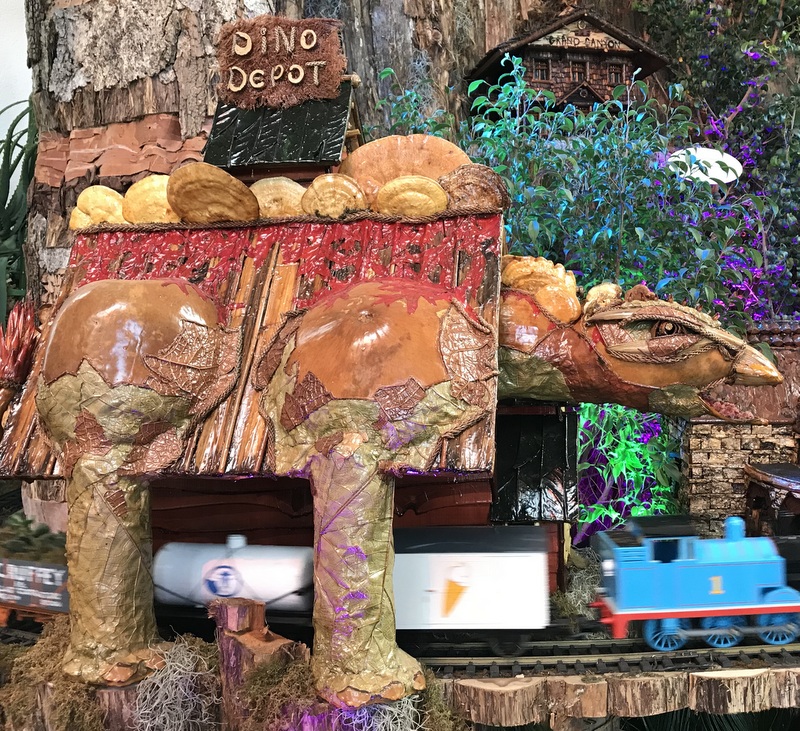 Two stations are works of pure imagination – this Dino Depot and a North Pole station, using plants that actually survive there. After all, this is a botanic garden, a font of plant knowledge, not some generic theme park!

Train history buffs will naturally love this exhibit, but people with farming in their blood will, too – it chronicles the importance of trains and their stations to farmers throughout the U.S. 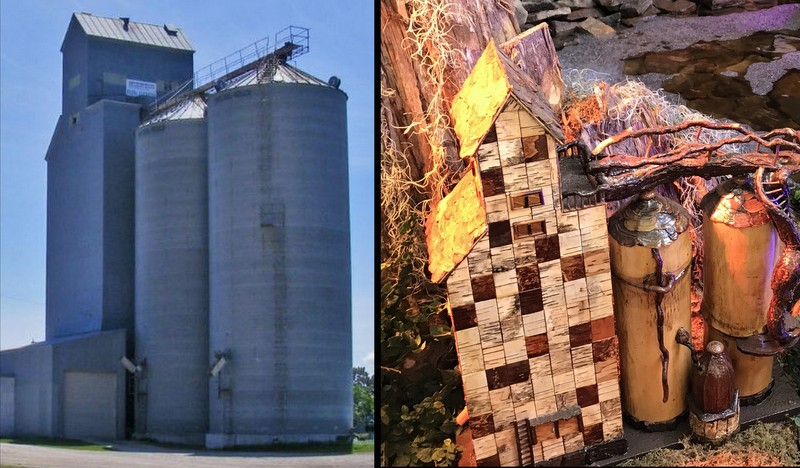 Above, a grain elevator in Minnesota

That reminds me that the USBG’s public affairs and exhibits guy is Devin Dotson (profiled here on the Rant) and his degree is in agricultural communications. So it’s no wonder that ag history is taught here at the Botanic Garden, where the focus isn’t just on ornamentals, and never has been. Throughout the train set, examples of grains shipped through the stations are displayed along the tracks.

For most public gardens (perhaps all of them), holiday displays are meant for everyone, not just Christians. The staff told me this place is super-popular, especially on Christmas Day, with the many Muslims, Hindus and Jews who live in the area. Not to mention the untold “nones” like me who don’t practice any religion at all, but still love the “holidays”.

So thanks to public gardens for giving people who don’t celebrate Christmas something awesome to do that day, besides going to the movies. The USBG is free and open every day of the year.