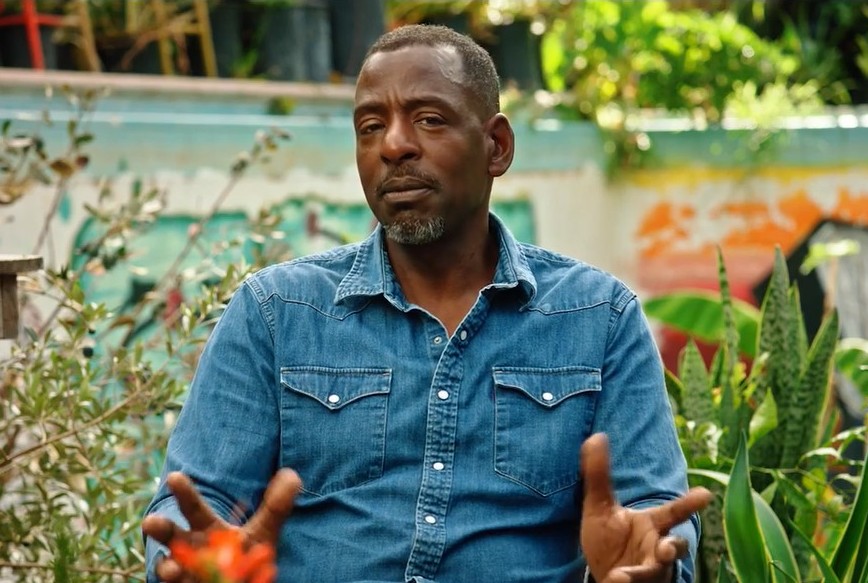 To my now-surprise, I had no idea who Ron Finley was, despite Marianne saying that HGTV should hire him (not Martha).  Or Allen quoting him and describing him as “the community activist and guerrilla gardener from South Los Angeles.”

I’ll blame my ignorance on living 3,000 miles away. But then my nephew, a writer for DreamWorks right there in LA, recommended I take the classes in directing by Martin Scorsese and Spike Lee on Master Class as a way to improve my video-making. What a laugh, I thought at the presumption of video-making ambitions waaaay beyond mine.

Then I read the article in the New Yorker “Can Master Class Teach you Everything?” which quoted from Ron Finley’s course in gardening: “Knowledge is gangsta. Soil is gansta. Air is gansta as fuck. You can’t get no more gansta than air.”  And Finley told the author that his class isn’t really about gardening. “It’s about freedom.”

So of course I was sold – on Finley and Master Class, whatever it is!

I signed up for a free two-week trial, but with winter coming on, was thinking I might treat myself to a few months of viewing, at least. (MasterClass costs $15/month or $180/year.)

Now I dare you to watch this 1-minute video of Finley quotes – including the ones about what’s gangster – and not love this man.

It wasn’t his expertise in growing food that impressed me (honestly, I didn’t watch all of those lessons) but his authenticity, the lack of ego, at least as caught on tape for this course. And so smart.

In fact, all the courses I’ve watched so far are engaging for the experts’ authenticity and knowledge, and the very high production values. Money has been spent!

They spent on the site, too. It’s more user-friendly than most of the streaming services I put up. (Listen up, PBS and Apple+.)

I’ve watched courses by Steve Martin, Questlove, Danny Elfman, Sheila E and Roxanne Gay. Next up for me are hours of immersing myself in the wisdom of Frank Gehry, Usher, Issa Rae, RuPaul, Bob Woodward, Jon Kabat-Zinn and yes, those famous movie directors. A friend whose kids gave her a Master Class subscription for Christmas last year recommended the course by Anna Wintour (who knew?) so I’ve added that to my list.

I keep several courses open and dip in occasionally for a lesson or two. I’ve been watching during my morning work-out and these amazing teachers are so interesting, they keep my mind occupied, not doing its usual rumination. Unengaged, my mind isn’t the most fun place to hang out.

Now about experts in gardening, Finley is the only one, so far.  No Martha! So who else do you think they should hire?  How about Joe Lamp’l? I’d say Linda Chalker-Scott but she’s already on Great Courses, a competitor.