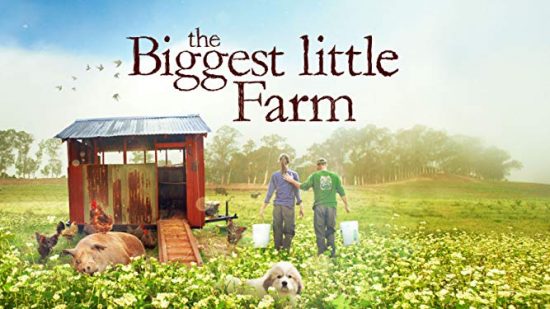 Have you seen the feel-good documentary The Biggest Little Farm? You should. It’s the story of a husband and wife who change careers to pursue a dream of living and working on a sustainable, diversified farm on impoverished soil 40 miles north of Los Angeles.

Many of my friends loved the film. I had a different view. My head hurt after watching a portion of the couple’s eight long years of on-the-job training at Apricot Lane Farms. Coyotes were hungry for lambs; snails had an appetite for fruit trees; and wildfires, close by, nearly put their new livelihood in jeopardy.

I recommend the film for anyone who wants a glimpse into what it takes to start a farm from scratch. It’s a tough row to hoe.

Recently, I have been thinking about The Biggest Little Farm (Apricot Lane Farms) alongside AppHarvest, the huge Dutch-designed indoor farm in eastern Kentucky. My head started spinning again, imagining the complexity and scale of the startup.

Apricot Lane Farms is a 214-acre farm where the “old way of farming is seen as the future.” AppHarvest is a colossal, high-tech 60-acre greenhouse descendant of the 19th-century Wardian case.

Farming is not the land of milk and honey. The dairy industry is in the tank, and bees are in decline. It’s hard to make a living in agriculture. Fancy German cars are as scarce in a country parking lot as cash cows are in the barnyard. 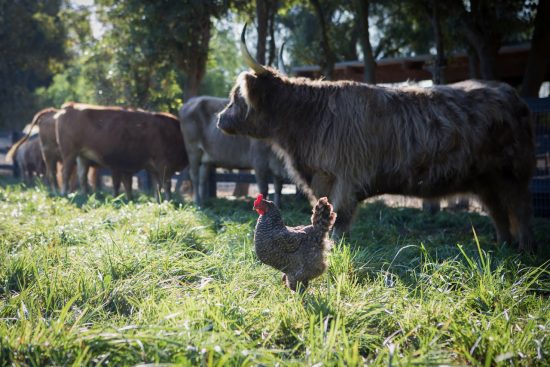 Apricot Lane Farms and AppHarvest, however, share two essential ingredients: They are both growing fresh food and have substantial financial backing.

Farming success requires start-up funding, responsibility for employees and natural resources, a capacity to pay back investors and creditors, all while striving toward a sustainable level of profitability and trying to maintain sanity.

Hope Jahren is the author of the best-selling, autobiographical Lab Girl. Her latest book is The Story of More: How We Got to Climate Change and Where to Go from Here. She distills existential concerns that Apricot Lane Farms, AppHarvest, and all of us are facing:

“The more complicated problem, unique to our generation, is that the enormous consumption of food and fuel by just 10% of us is actively threatening Earth’s ability to produce the basics of life for the other 90%…Ultimately, we are endowed with four resources: the earth, the ocean, the sky and each other.”

John and Molly Chester were living in a Santa Monica apartment, with their barking dog who was annoying their neighbors, when they decided to pivot from city life to the country. John was an Emmy Award winning filmmaker and Molly was a private chef. 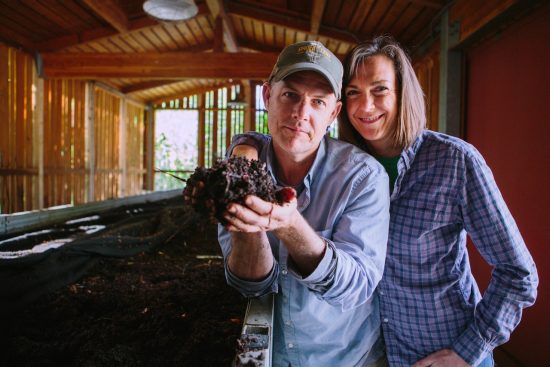 Old MacDonald had a farm. The couple wanted one, too, but the Chesters needed money. They made the pitch to neighbors and family, and the word got around. Soon they began tending chickens, cows, lambs, and 200 varieties of fruits and vegetables. In a dramatic  movie closing, the farm comes to beautiful fruition.

AppHarvest is the inspiration of Jonathan Webb, a visionary and gifted pitchman who grew up in Corbin, Kentucky. The company has raised an astounding, hundreds of million dollars to develop what they hope will become America’s “Ag Tech capital” in the southern Appalachians—with pesticide-free, non-GMO tomatoes and leafy greens. They will use stored rainwater for their crops, which they will recycle with UV lights and sand filters. Eastern Kentucky receives generous annual rainfall and is within a day’s reach of 70% of the U.S. market. 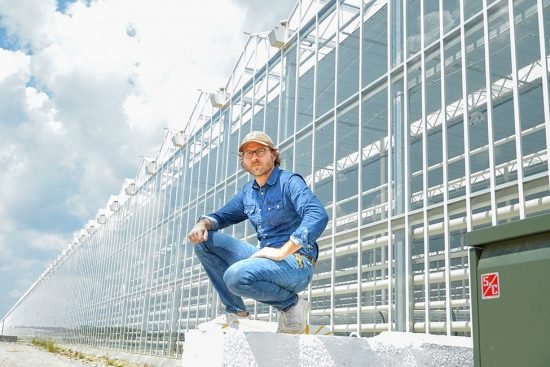 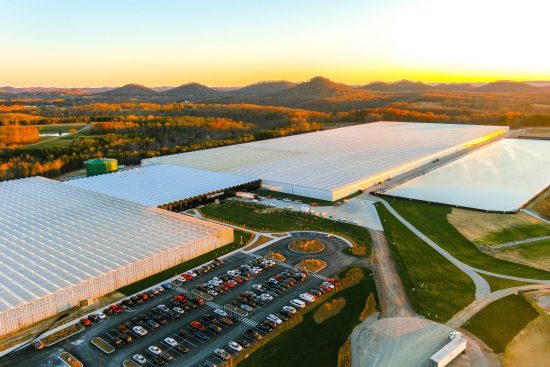 I will turn on energy-efficient LED grow lights in the next few weeks,  similar to what AppHarvest uses, to produce vegetable and flower starter plants down in the basement.

Our own tiny indoor farm.

I could buy cheaper starter plants from a garden center, but as plantsman Kelly Norris pointed out in a recent Growing Greener podcast interview with Tom Christopher, there is something wonderful about the commencement of sowing your own seeds. And who doesn’t enjoy a summer sandwich with homegrown tomatoes slathered in mayonnaise?

It may be quixotic to think that sowing your own seeds at home is a path to righteousness, but it is an act of hope for anyone who has watched a seed cotyledon push through the soil.

We take our soil and water for granted and fall short of being able to feed the world’s undernourished from our land of plenty. Big Agriculture produces and wastes more, especially this past year, and farmers are struggling to stay afloat as commodity prices fluctuate.

I love walking through farmer’s markets, meeting hardworking and passionate growers. In the summer, I always choose flavorful, heirloom tomatoes like Vinson Watts, Mr. Stripey, Cherokee Purple or Mortgage Lifter. There is a local connectedness to place and product that I don’t find at big supermarkets.

This winter, the rabbits ate what was left of our Bibb lettuce, but we are still grazing on kale.

I have walked the produce aisles at the grocery store this winter and found blueberries from Chile, asparagus from Peru, broccoli from California and yellow squash from Arizona.  The blueberries and broccoli are OK, the asparagus not so much. The yellow squash is mushy.

I pass up the decent looking tomatoes that have come from Mexico. I know they lack flavor. These tomatoes are thick-skinned and have a shelf life of 4-5 weeks. I am sure they could be smothered in olive oil and balsamic vinegar, sprinkled with salt and pepper and buried as filler in a salad, but why bother? I’ve never made a tomato sandwich in the winter.

I may change my tune.

The first AppHarvest tomatoes were shipped last week, and Martha Stewart, who is an early investor, and board member, was one of the first to sample one of their tomatoes: “The taste is extraordinary… This is the flavor we have all been craving.” 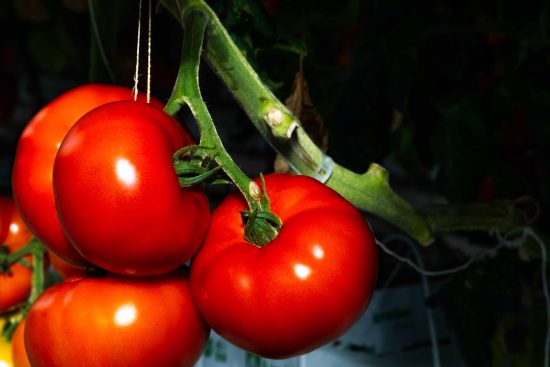 In The Story of More, Hope Jahren’s engaging storytelling details the blessing and the curse of food production. China and India have over a billion people, and many of them are following a world trend: they’re moving to cities. Jahren asks, “After the whole world moves to the city, who is left to run the farms?”

Ron Finley, the community activist and guerrilla gardener from South Los Angeles, argues that “Growing your own food is like printing your own money.” This should be good news for Apricot Lane Farms and AppHarvest.

Finley is encouraging local self-reliance as well as a food desert exodus from two-liter sodas and junk food.

I hope Apricot Lane Farms, and the biggest little farms, succeed— wherever they are. They’ll need lots of capital and stick-to-itiveness.

I am pulling for AppHarvest, also. They are short on neither capital nor ambition; and they intend to produce plants “for a better world” while growing the economy in eastern Kentucky. 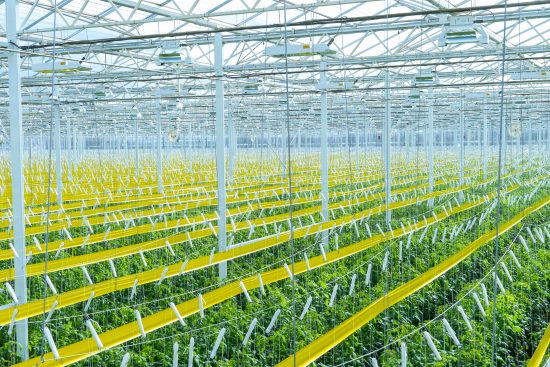 You may buy a piece of the farm life. An initial public offering for AppHarvest opened on the NASDAQ, on Monday, under the ticker APPH.

But hedge your bets, if you do buy shares.