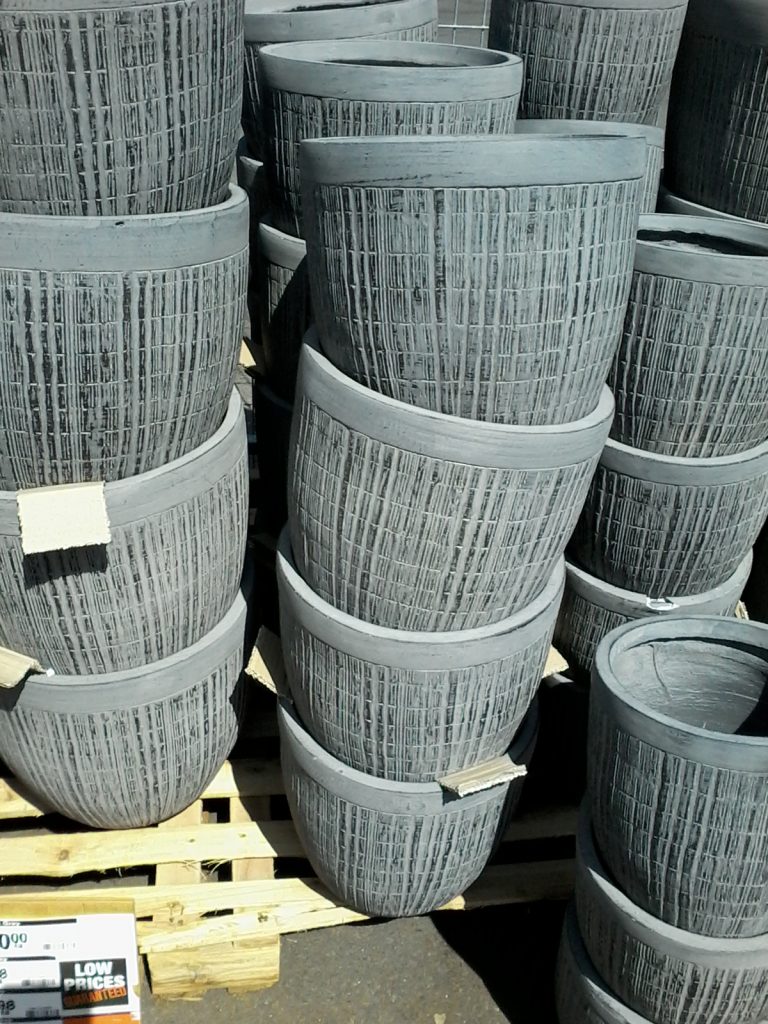 On the label of an old painting, I came across a word we rarely see: “stooks,” meaning erect bindings of wheat or other sheaves dotting a field, ready for transport to granaries or ranches. You still see bales of newly cut hay spread over farm fields, but today they’re encased in massive wraps of plastic. How much of this packaging, on how many millions of acres of Plastic Prairie, is added to the world’s nonbiodegradable waste load every year? According to Statistica.com, the volume has reached eight billion metric tons.

Plastic, says oceanographer Charles Moore, is a worse threat to life on Earth than is climate change. And we don’t only have “Plastic Prairies” to worry about; the household garden, too, has become  plasticized. We gardeners could do more to reject these products of the petrochemical industry in our own plots, but, judging from the volume of plastic goods being bought at garden supply store, “Home Hardware” has become Home Plasticware. 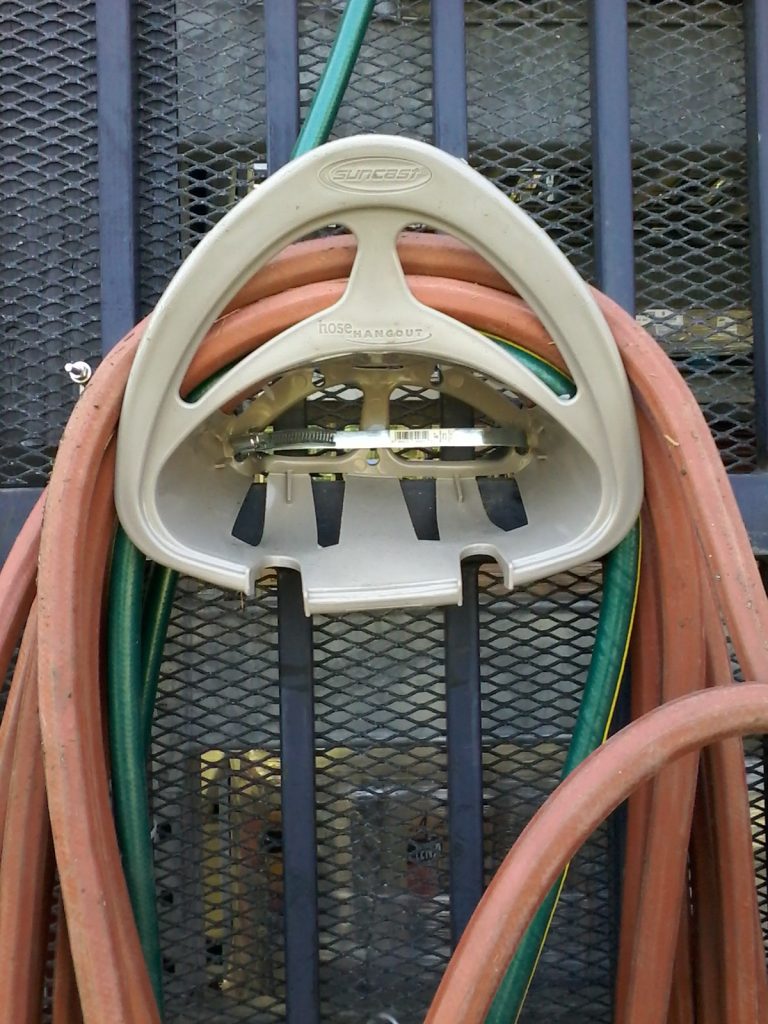 When was the last time you lifted a watering can that was actually a can? A “can” is a metal thing, but metal is scarce in most suburban gardens. Hoses used to hang on curved metal brackets, and chicken wire was actual wire. Walls were once made of the stones dug out of the cleared forest soil by homesteaders. Tool handles were made of wood, not rubbery plastic whose grip we have been persuaded we prefer. Gripping handles of wood creates a kinship with the early pioneers who fashioned tools from hand-hewn branches, but many young gardeners have probably never in their lives held a tool with a wooden handle.

Look around the garden supply centre next time you visit, and notice that not only are seedlings sold in plastic pots, but large plastic bins are sold as permanent plant containers. Patio “paving” is made of rubbery plastic mats and rose starter roots are sold in sock-like plastic bags. Even rakes have lost the long flexible metal fingers that delicately gathered up fall leaves; now the rake head is made of polyethylene. 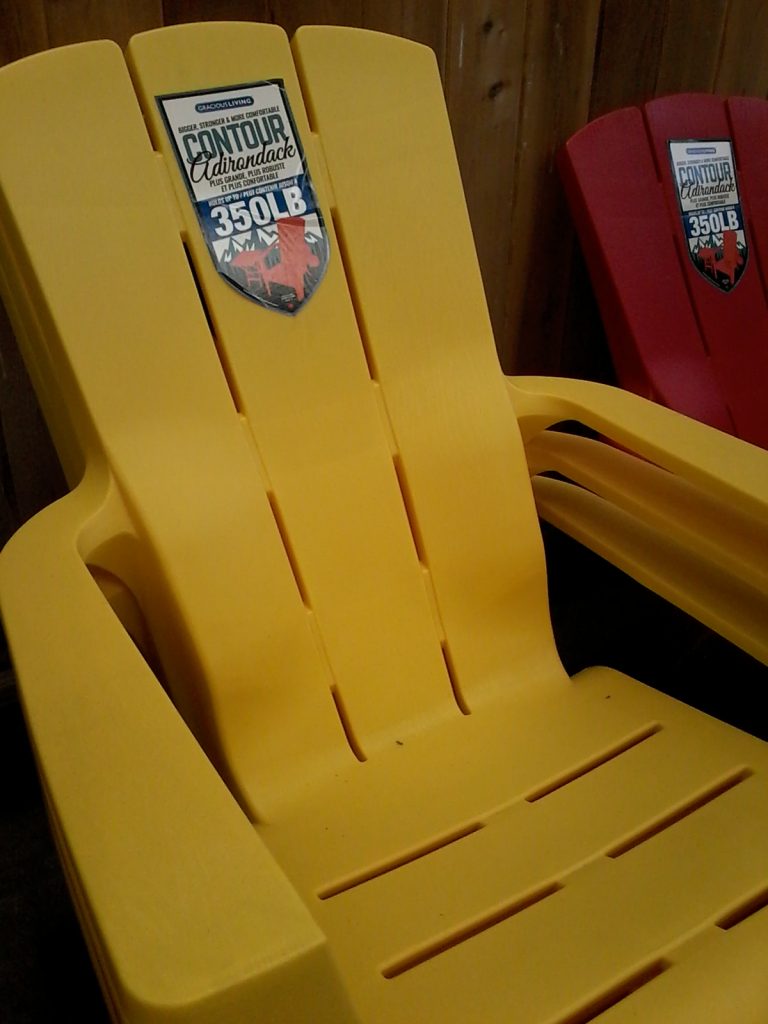 Even the iconic “Adirondack” chair, is sold in a hard plastic form instead of its traditional wood. Designed in the early twentieth century by Thomas Lee of Massachusetts, the teak Adirondack chair with its wide arm rests and a sloping slatted back was meant for resting on after a day of digging, leaning back to enjoy the sunset after a hard day’s work.  Somehow, you can’t rest properly on acrylic and sealants. A sunset doesn’t look the same from a plastic chair. Fanciful? Maybe. Much of what occurs in the horticultural world is fanciful and romantic.

We have been persuaded that plastic “weathers” better than wood, but that’s a misapprehension. It lasts for millions of years, yes, but only as garbage. It soon looks shabby, becoming stained, cracked and moldy years sooner than does cedar, hemlock or willow. Then it goes to the landfill, and from there as shards and chunks into rivers and oceans where the chunks may look to turtles and albatrosses like food.

“Poly” say the product labels, which may mean polyethylene, polyurethane, or the polypropylene-fiber which ends up in tap water, and in our garden hoses, with which we water our vegetables. I may be stepping on some latex-gumbooted toes here, but the popularity of “polytunnels” seems particularly disturbing. Yes, these transparent thermoplastic polyacrylates do allow for year-round gardening with controlled temperature and light, but so does the old-fashioned glass greenhouse, that iconic artistic Victorian-Edwardian staple found both on landscapes and in literature. (Apparently the first greenhouse appeared at Oxford University’s Botanic Gardens in 1637.)

The UN (www.unep.org) says there could be more plastic than fish in the oceans by 2050. That’s because, according to National Geographic, 91% of plastic is never recycled. That means that we gardeners (like consumers and businesses of all sorts) need to reject it at its sources. Once manufactured, it’s eternal. So now, at the garden supply centre, I ask where the “natural products section” is. (Sometimes I get puzzled looks.)

For centuries the great horticulturalists, from Capability Brown to Gertrude Jekyll, managed brilliantly with natural-fiber seed pots, rubber hoses, wooden birdfeeders and biodegradable twine—and their metal tools were robust enough to be passed down for generations. It’s time to bring these out of the museums and back to the household garden.

After a lifetime of gardening (starting at age five with her grandmother), Sandra B. Julian has downsized. Now she gardens a bit and writes a lot, and tours historic gardens with horticultural friends. She’s lucky to live on the mild west coast of Canada where plants bloom year-round. A nature writer and memoirs facilitator, she blogs about her tree passion at TreeWatchVictoria.