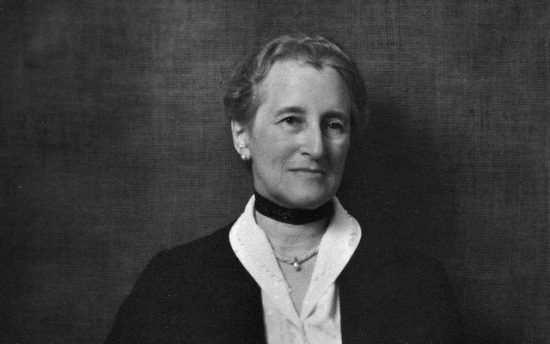 Rose and I recently went out for our first movie in a long time. We picked a good one. “Gardens are good for the soul…They make you feel like your city or community care about you,” Lynden Miller, says at the outset of Beatrix Farrand’s American Landscapes. Miller, an award-winning public garden designer, is featured in the story of America’s first female landscape architect, in a beautiful hour-long conversation.

Should you watch the documentary?

Yes, you should. Beatrix Farrand’s American Landscapes is essential viewing for anyone interested in American garden history and garden making. The documentary looks at two undaunted artists, sensitive designers and experienced landscape gardeners—Farrand and Miller—who prevailed against sexism and snobbism. 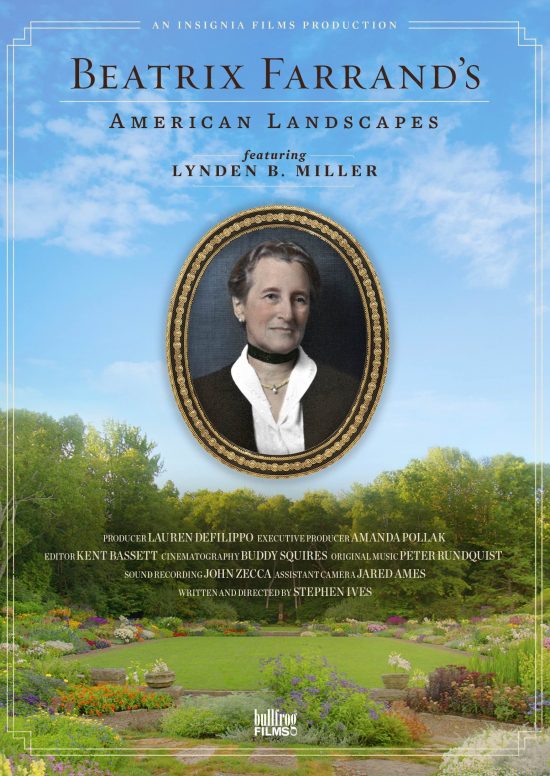 I first met Lynden Miller at the 1985 Perennial Plant Symposium. These were the early days of a perennial plant wave that had begun sweeping the United States a few years earlier. Adrian and Allen Bloom were on the program. So were Allan Armitage and Allen Bush. I must have looked nervous. Lynden Miller and Fred and Mary Ann McGourty took me under their wings with advice and encouragement. I was a 34-year-old nurseryman, scared to death. It was hard to imagine standing up in front of hundreds of rabid, perennial zealots and talking about my tiny Holbrook Farm and Nursery. Lynden and the McGourtys sat in the front row for my talk and told me, beforehand, to look and speak directly to them. They smiled throughout. The audience applauded. I have never forgotten Lynden’s kindness, nor McGourtys’. 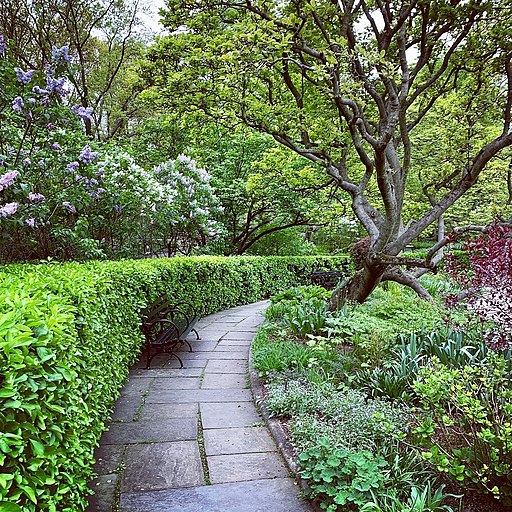 Lynden spoke the next year. Authors Fred McGourty and Pamela Harper, along with German nurserywoman Countess Helen von Stein- Zeppelin, were on the program also. Lynden’s talk, “Perennials in Urban Areas,” focused on a remarkable transformation of the formal Conservatory Garden at the north end of New York’s Central Park that she had begun a few years earlier. The Conservatory Garden opened in 1937, but by the early 1980s, with the city in economic and cultural crisis, the garden had become worn down by drugs, vandals. and occasional voodoo rituals. 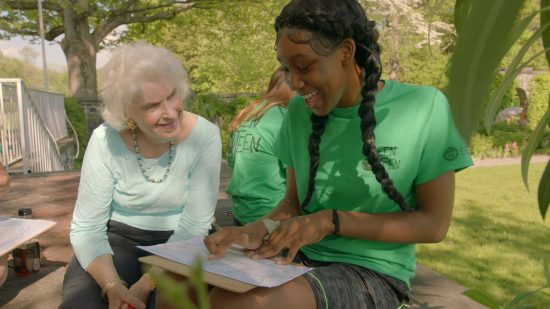 Lynden and I kept in touch after I moved to Louisville and joined the Olmsted Parks Conservancy board in the late 1990s. I was then working for Jelitto Perennial Seeds but was interested in the preservation and protection of Louisville’s impressive network of 17 Olmsted-designed parks and nearly 15 miles of parkways. Lynden schooled me on park complexities and implicit political struggles, lessons she had learned nurturing the Conservatory Garden, Robert F. Wagner Park in Battery Park City, Bryant Park and other public spaces.

She would be embarrassed at any suggestion that she also be called a star, but she is one. “I believe in the promise of beautiful landscapes to make people’s lives better. No one believed that more than my heroine Beatrix Farrand,” Miller says.

Keeping up with the Joneses

Beatrix Farrand was born to money in New York in 1872. Her mother and father, Mary and Frederic Rhinelander Jones, according to Miller, were so “wealthy and high on the social ladder that striving members of the gilded age of New York society were said to be keeping up with the Joneses.” Few could claim to come from five generations of garden lovers. Summers at Mount Desert Island on the coast of Maine were a privilege she didn’t take for granted. Here young Beatrix began her lifelong love for wildflowers.

Landscape design was not a profession open to women in the late 19th and early 20thcentury. Farrand, as a 20-year-old, found a mentor. Charles Sprague Sargent, the first director of Harvard’s Arnold Arboretum, took her under his wing and taught her design methods, giving her free rein on the arboretum’s extensive collection of trees and shrubs. Farrand recalled: “My friends looked upon my studies as mild mania, but they have learned now to regard them seriously.” As Farrand’s career grew, Frederick Law Olmsted dismissed her as a “dabbler.” Farrand was the only female among the 11 original founders of the American Society of Landscape architects in 1899. 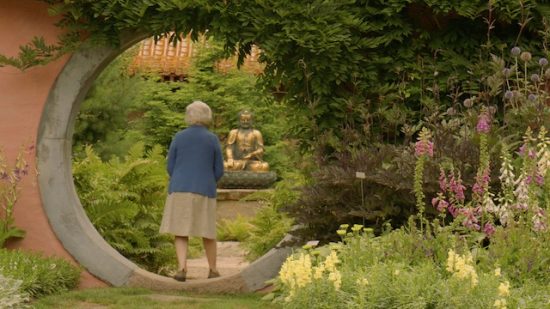 Although her patrons were the rich and famous, she was an early advocate for public spaces. Her work on John D. Rockefeller’s massive project, that became Maine’s Acadia National Park, is testament to her sensitivity of the natural ecology and attention to construction detail. No substantial repairs, in nearly one hundred years, have been required on the approximately 50 scenic miles of packed gravel roads. 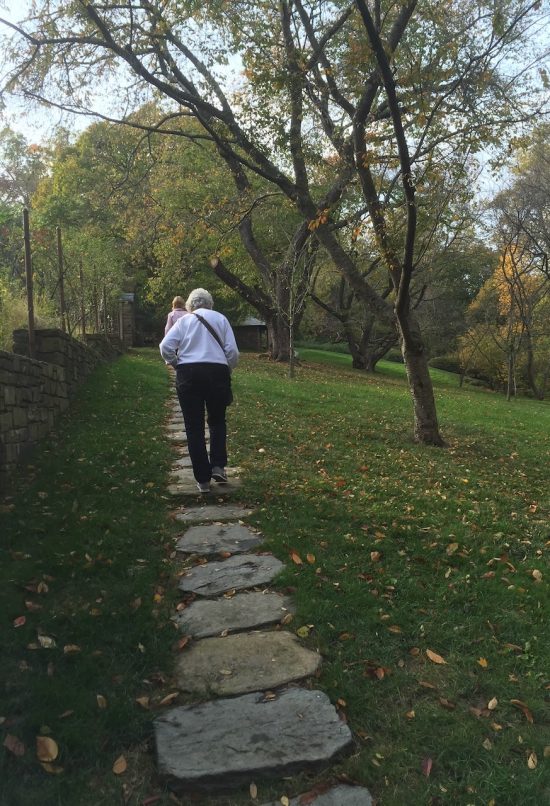 My familiarity with Farrand’s work has come, primarily, from visits to Georgetown’s Dumbarton Oaks on nearly every visit to Aunt Rose, who lived a short walk away. 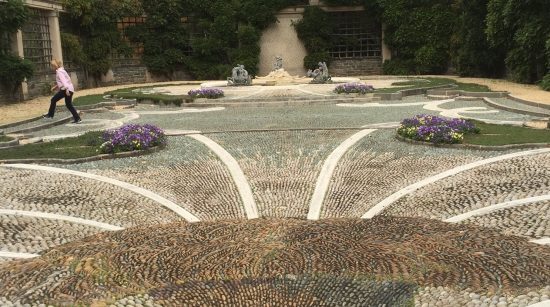 The magic of Farrand and Miller

There is a personal coincidence between Beatrix Farrand’s Dumbarton Oaks and Lynden Miller’s makeover of Central Park’s Conservatory Garden. Lynden spent happy childhood days wandering around Dumbarton Oaks, but during the documentary I realized these are two of very few gardens anywhere that pull off a rare magic trick, more often encountered in nature. 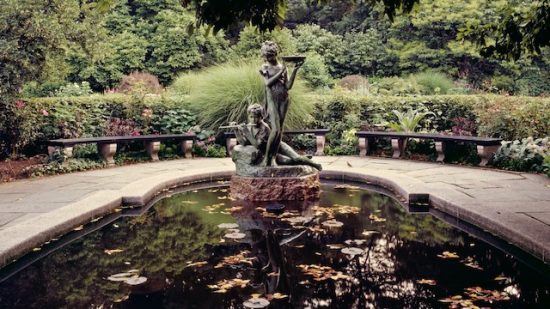 I garden for those rare moments that combine beauty, curiosity and awareness with a random and unpredictable, explosive calming, that may last for only a few moments but will sidetrack every distraction around me.

These designs are inspired, the horticulture is terrific, but most important, the gardens exist because Beatrix Farrand and Lynden Miller ignored everyone who said they were wasting their time.

Photos, except where noted, provided by Bullfrog Films.

Individuals can stream the film from OVID.tv at https://www.ovid.tv/videos/beatrix-farrand-s-american-landscapes

BEATRIX FARRAND is available for in-person or virtual community screenings from Amazon Prime or from Bullfrog Communities at https://www.bullfrogcommunities.com/beatrixfarrandsamericanlandscapes