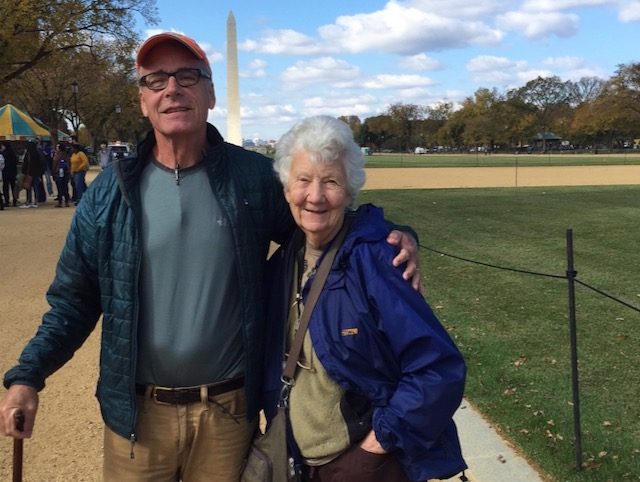 I often visited Aunt Rose, and her garden, in Washington, D.C., since I married her beloved niece and namesake, Rose Cooper, 25 years ago.

Aunt Rose was a real-deal gardener.

A good garden requires give and take. You need to nurture a place. It takes years to learn the nuances of soil types and hidden roots. Ice storms and hurricanes, among other forces of nature, can make a mess.

There is no sure deal.

Other than heavy lifting and hard pruning, Aunt Rose did all of her own gardening chores.

A well-loved garden can’t exist without a patient and deliberate gardener, but even the best intentions can’t slow the hands of time.

Aunt Rose’s garden, her final companion, was a jungle toward the end, but she seemed serenely unaware. She acknowledged regularly that it needed a “little work.” On calls this year, she would ask me when I was coming to visit. “I have questions,” she’d say. She was thinking about a shrub for the back of the garden. Aunt Rose’s mind was failing. Our phone calls became a regular playback of the previous call. 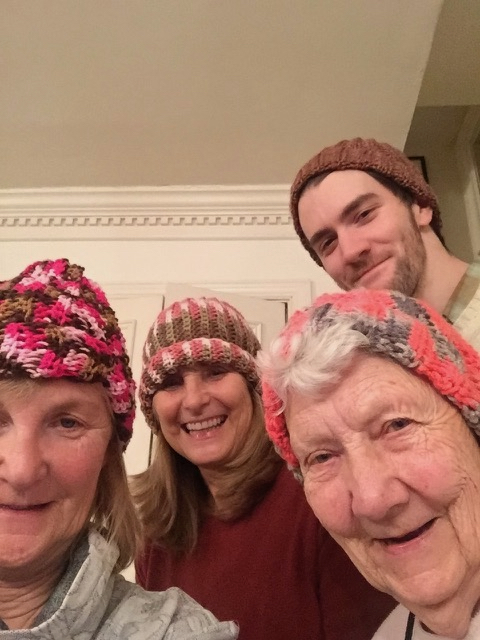 The pandemic became full blown. I never got to visit Aunt Rose again but never stopped thinking about a shrub for her back garden.

Aunt Rose gardened in Georgetown, D.C., for 52 years. She worked for Republican senators for many of those and was Kentucky Republican Senator Thruston Morton’s Personal Assistant from 1957-1969. Those were different times. There was more political give and take across the aisle between Republicans and Democrats. Senators would eat meals together in the Senate dining room. Now they relentlessly go off the Hill to make calls to raise money for their next campaigns.

Aunt Rose knew the Capitol Hill power brokers, and they knew her. She was a force. When Senator Morton retired from the Senate, he told Aunt Rose, “You did a great job, but I was always afraid of you,”

Aunt Rose did not mince words.

(She was a life-long Republican but lived her last years in disbelief that the Republicans, and her country, had inherited Donald Trump.)

Later, she enrolled in the garden design program at George Washington University. 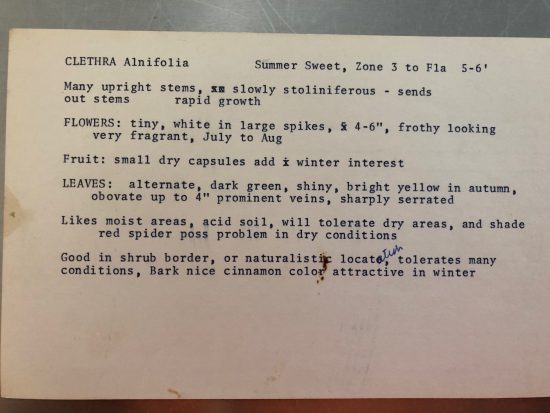 I have been reading dozens of her typed (and sometimes neatly handwritten) flash cards that she compiled during her studies all those years ago. The breadth of the plants was fascinating. Heaths, heathers, serviceberries, sourwood and hollies were included but also the less familiar golden larch (Pseudolarix  amabilis) and fragrant snowball (Styrax obassia).

I laughed when I saw the styrax flash card. Summer, a year ago, she was staying with us in Salvisa, and while we were enjoying dinner on the porch, she pointed to a tree and said, “That needs to be moved.” I wondered why she wanted to move OUR tree, but she had spaced out. Her dementia was worsening. She imagined that she was sitting in her garden.

The tree was our Styrax obassia—not Aunt Rose’s.

I played along and asked her why she wanted to move her styrax. “It will grow too big for its cramped space,” she insisted. 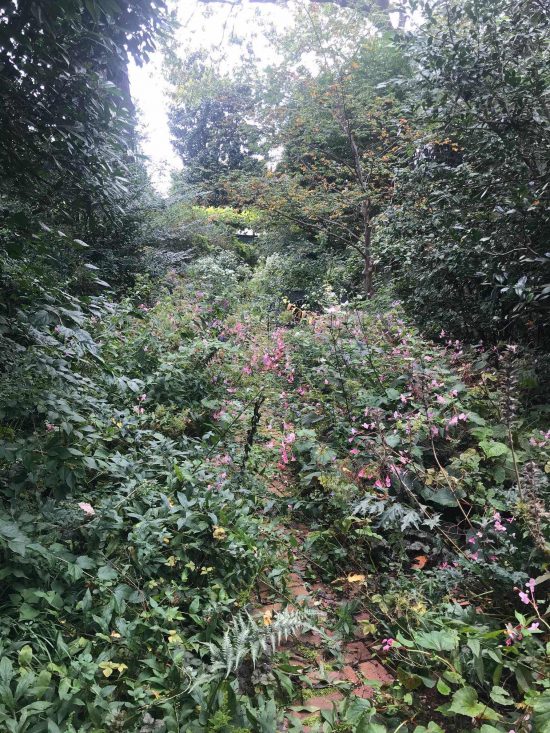 I worried for months about whether to move our styrax. I knew it might eventually grow too big for our space, but not in my lifetime. (It was already too big for me to move.) I met Aunt Rose halfway this past late winter. I pollarded (pruned and tamed) the limbs to make its future presence less overwhelming.

I have spent many hours pruning, raking, digging and sitting in Aunt Rose’s, long, narrow (150’ x 27’) garden. I can’t stop thinking about her blue, Lobelia siphilitica or the translucent, triangular seedpods of the hardy Begonia grandis, the mottled bark of her elegant Stewartia pseudocamellia or the red, quince blooms by her backdoor.

It’s hard to put my finger on why Aunt Rose’s garden, especially when it was being taken over by knotweed and white heath aster, remained so intriguing. For one triumphant reason, I concluded: Life’s hectic pace slowed down. The sirens of ambulances, heading to the nearby Georgetown Hospital, were drowned out by her garden’s silence.

Her toad lilies (Tricyrtis ‘Sinonome’) and pink anemones persisted unflinchingly. The low-growing Himalayan sweetbox (Sarcococca hookeriana var. humilis) would not be overrun by weeds, either. I found a big clump of the equally defiant sacred lily (Rohdea japonica), hidden in a shady back corner of her garden.

Aunt Rose’s last few months were worrisome for her nieces. She was letting go and would not accept help. Aunt Rose lived life her way until the end. She stayed near her garden. It didn’t bother her that the garden needed work—lots of work. She spent Covid days on her sun porch, playing solitaire and looking out over a half-century of life and love. 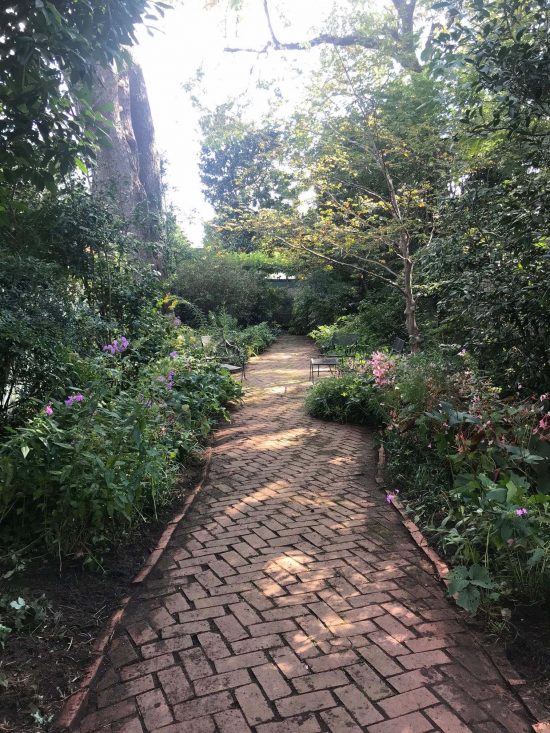 Tidied up in late September

I kept thinking, since her passing, about the question she repeatedly asked: What shrub would I recommend for the back of her garden? I pored over her flash cards for ideas. I was tempted by a redbud, serviceberry or a mountain laurel.

I settled on summersweet (Clethra alnifolia). Mike Dirr, author and plantsman, sings its praises. “During the summer, the sweet floral fragrance of summersweet can permeate an entire garden… An amazingly adaptable plant in full sun to relatively heavy shade.” 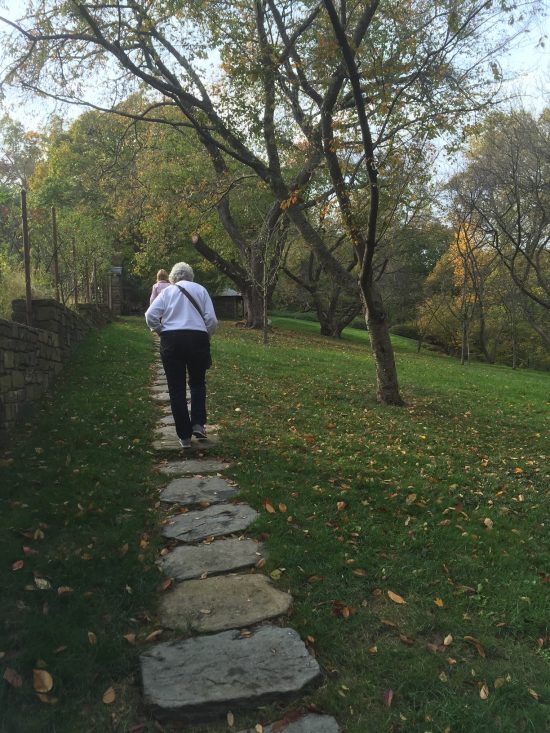 I’ve kept Rose’s son, and his wife, in mind. They may live there one day.

I’ll make my case for clethra in the months to come.

There have been more important immediate concerns.

Aunt Rose’s nieces cleaned up the garden in solemn gratitude after her passing.

Aunt Rose would be happy.