Nowhere in the country has the existence of statues honoring the Confederacy been more hotly debated than in the former capital itself – Richmond, Virginia, with its iconic statues along Monument Avenue (called America’s most controversial street).

Monument Avenue was certainly my favorite street in Richmond when I was growing up there, so when I visited last week, my first time as a tourist, I was dying to see the empty plinths after statues had been removed. And I’ll get to them later but first I think Rant readers might enjoy the gardens along this stunning street – I sure did. Combined with stunning architecture, and a wide green median strip, the avenue is a monument to good taste and generous street planning with or without the six famous statues.

Gardens and Homes of Monument Avenue 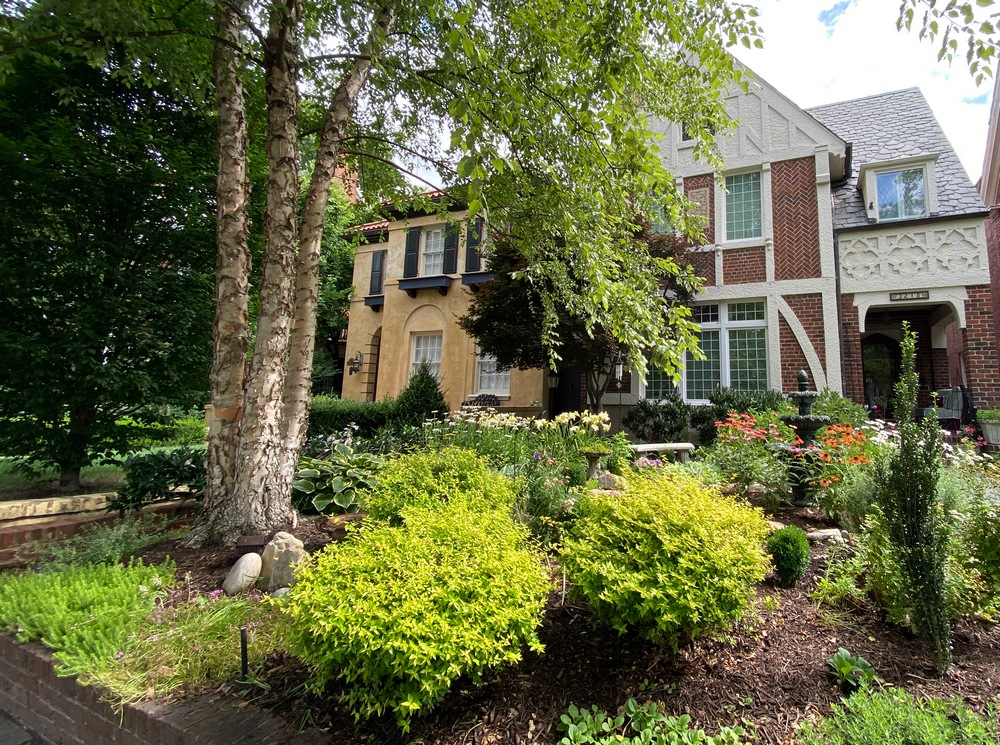 I spent several hours on a blissfully cool June morning cycling along the avenue, so stopping to photograph the MANY outstanding gardens was no problem. (I’ve found cycling has to be the perfect way to tour cities, as long as they’re not too hilly.)

Notice the variety of architectural styles!  I won’t even try to identify all of them, despite having recently taken (audited) a college course in the History of American Architecture.) 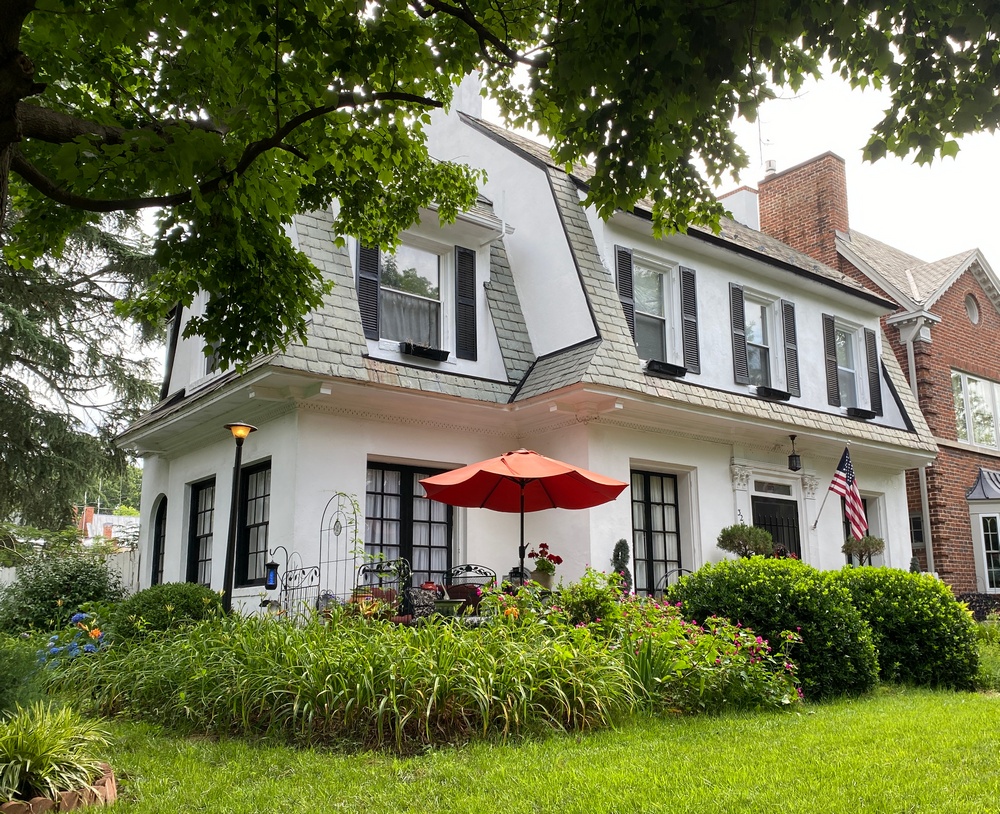 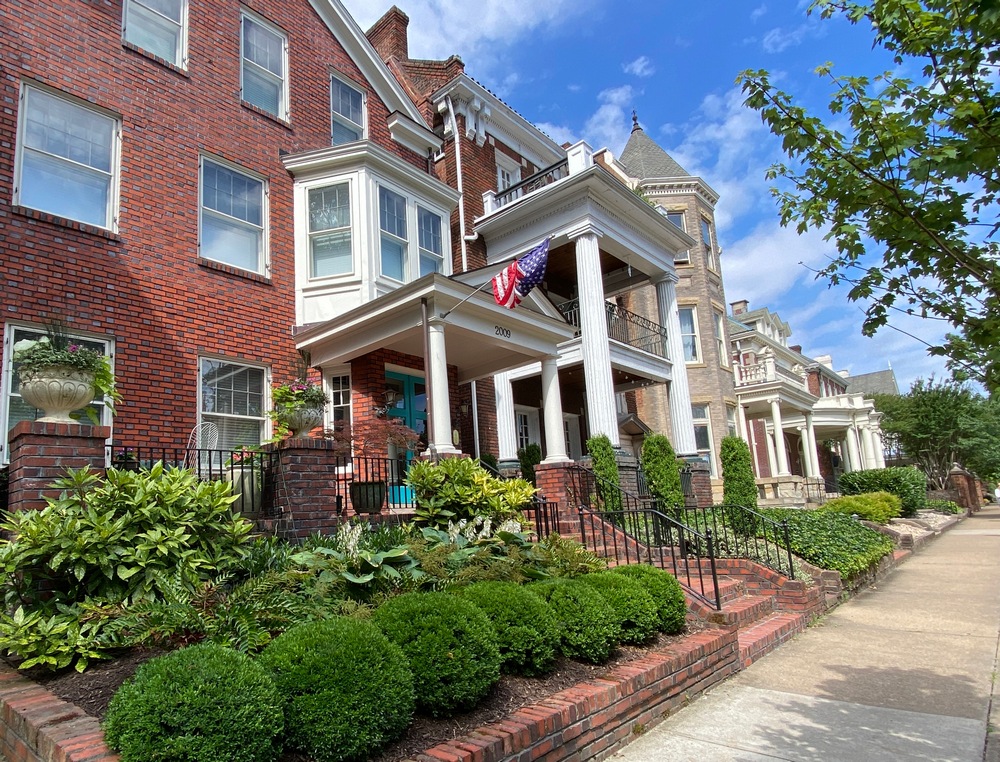 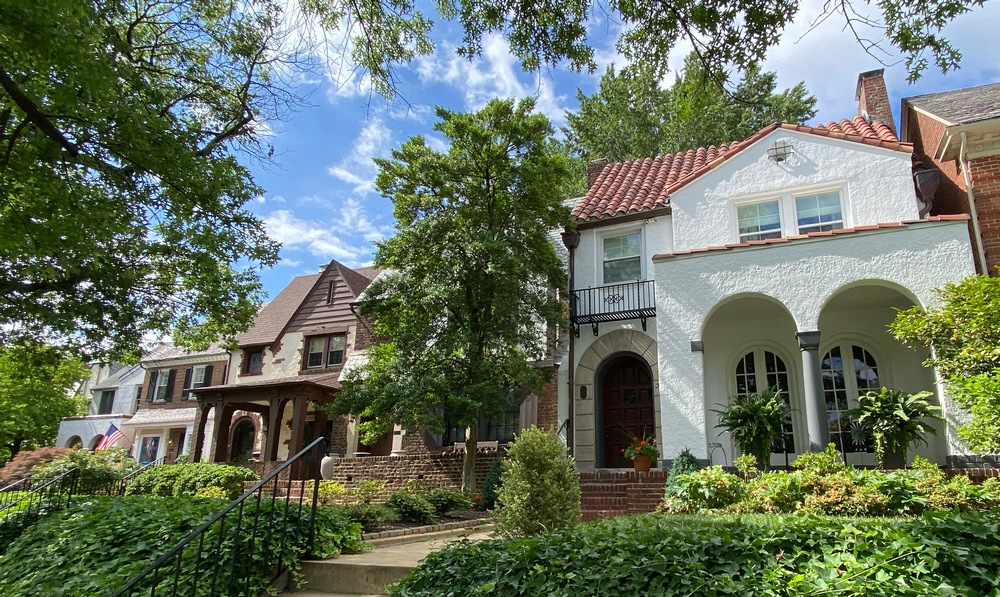 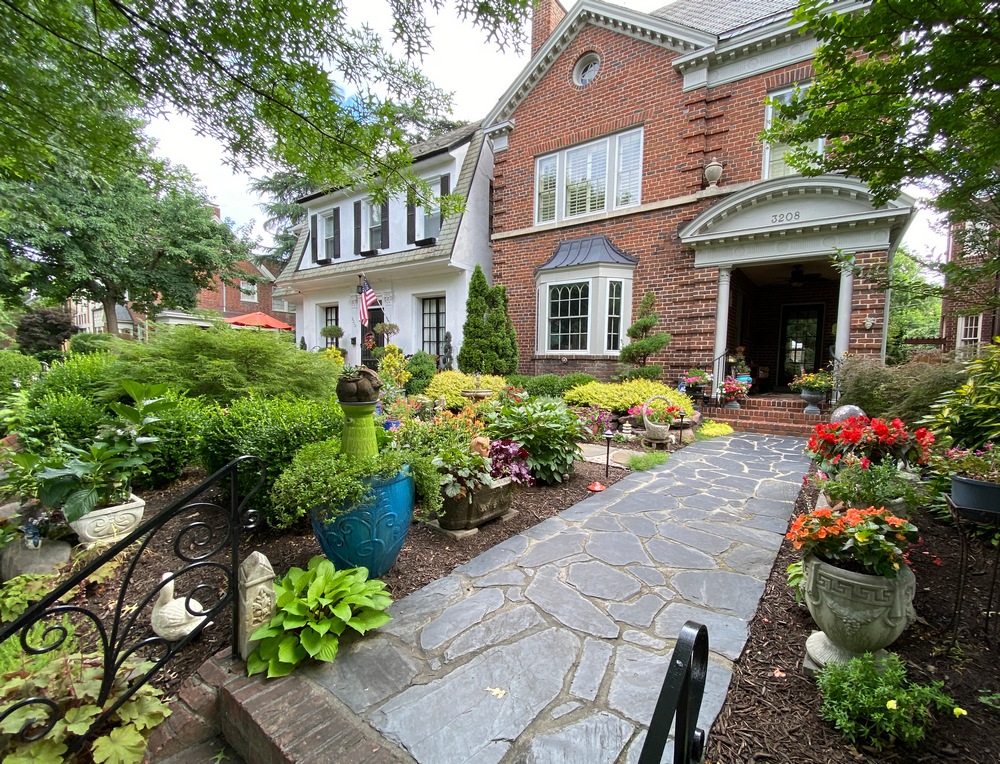 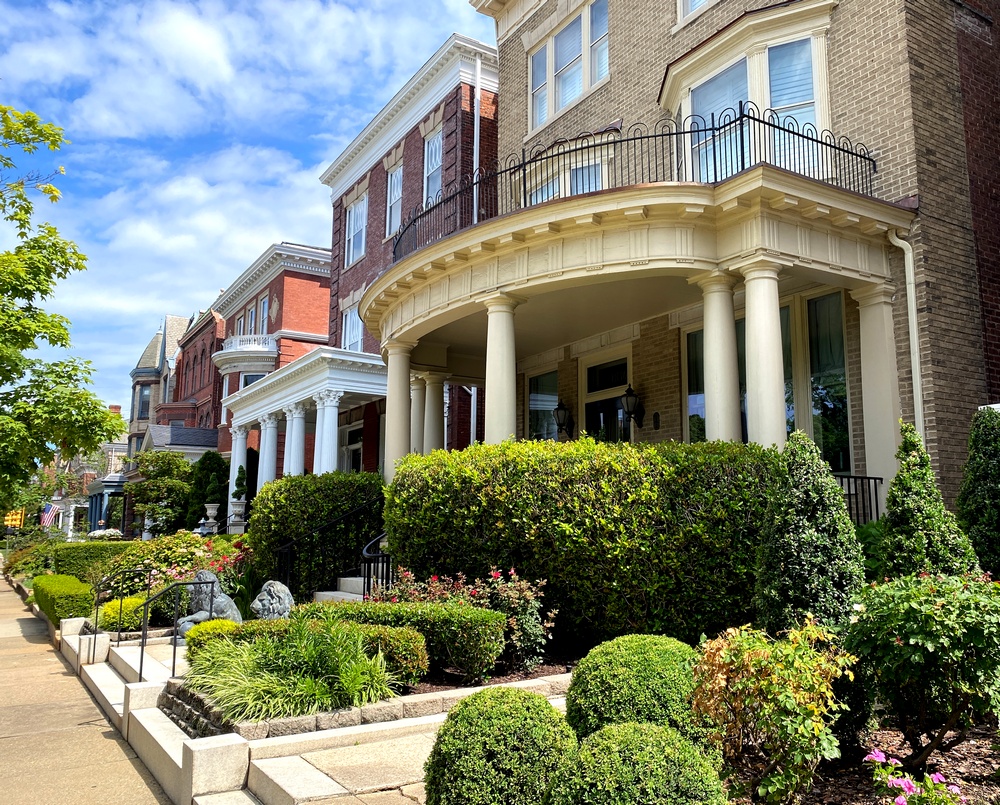 Large front porches are to die for. They make even this expensive neighborhood so much friendlier. 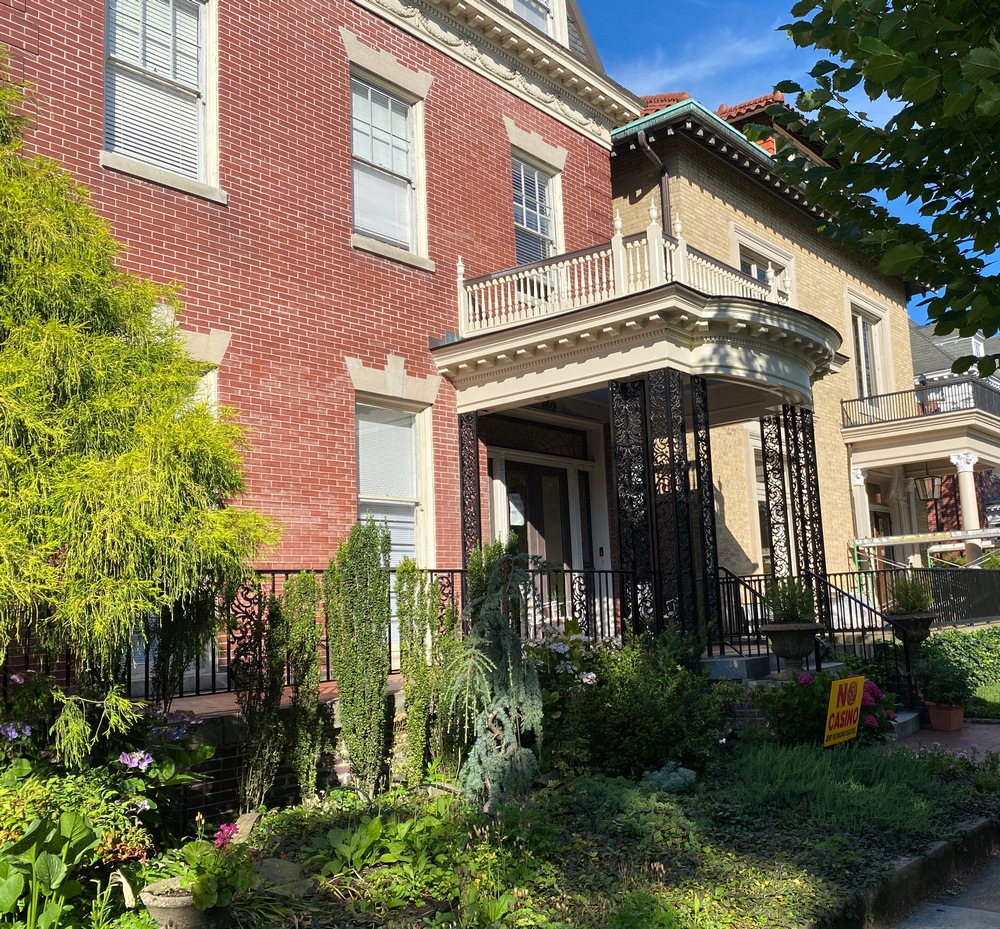 I saw lots of “No Casino” signs along the avenue. Yeah, I can’t imagine these homeowners wanting a casino anywhere near them. 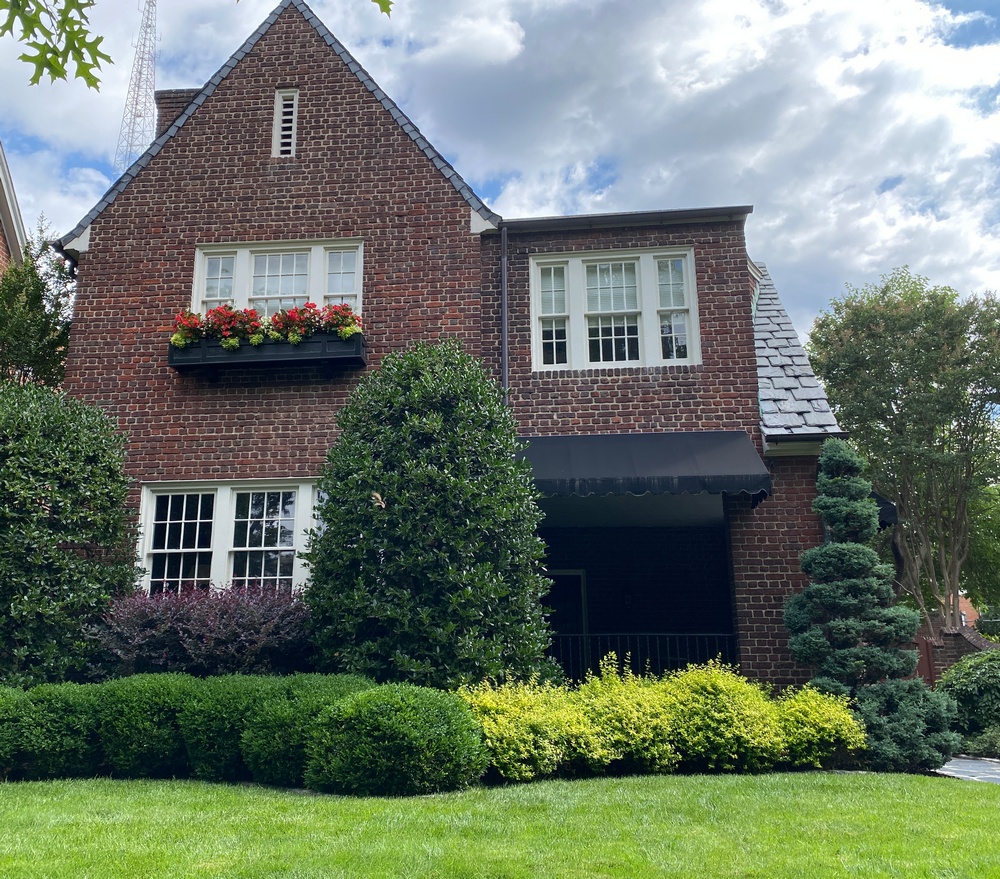 This is a good example of creating a lovely, colorful front garden using nothing but well pruned shrubs, mostly evergreen. This house is apparently famous. 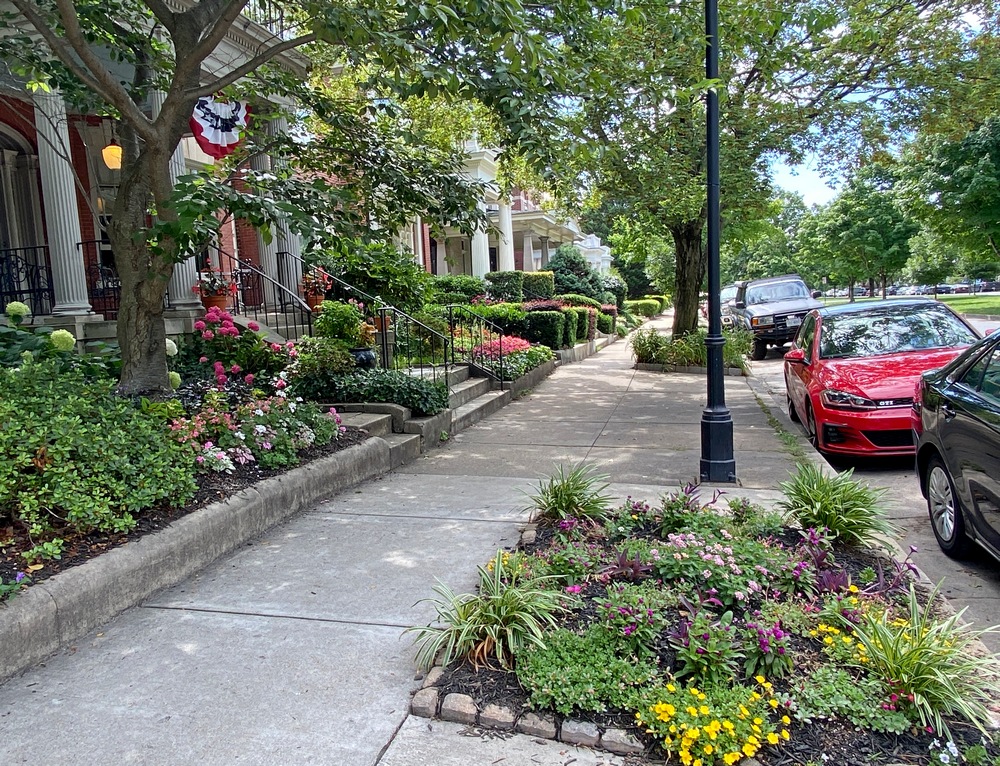 From the professional design above to a real gardener’s garden. Designers might call this busy and high-maintenance, but gardeners just call it gardening. 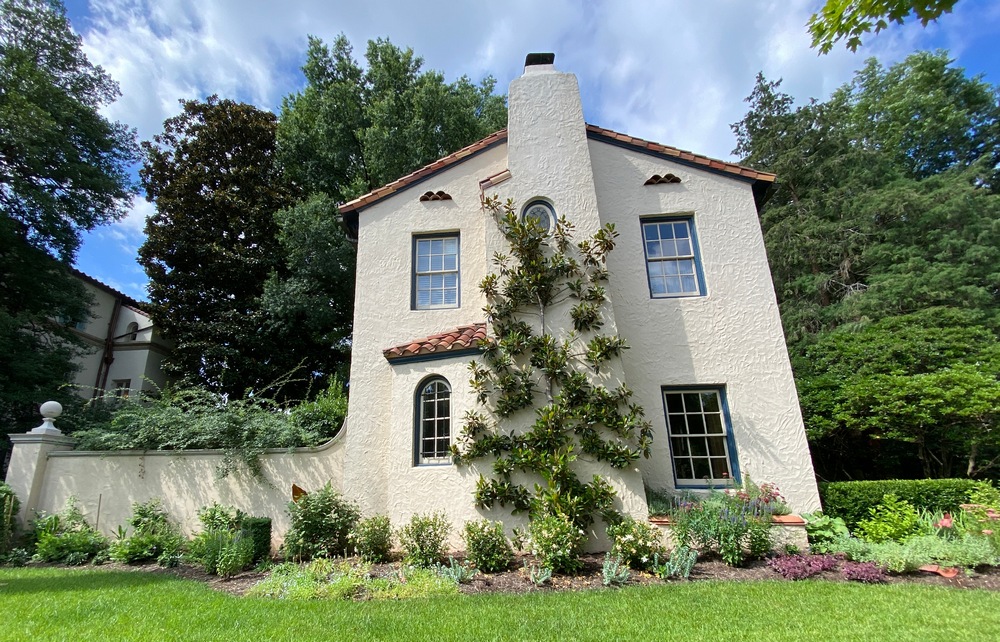 Among the distinctly Eastern architectural styles of Colonial Revival, Beaux Arts and others I can’t identify, I noticed this Spanish style home with the perfectly espaliered tree as its main feature. I think it fits in just fine. 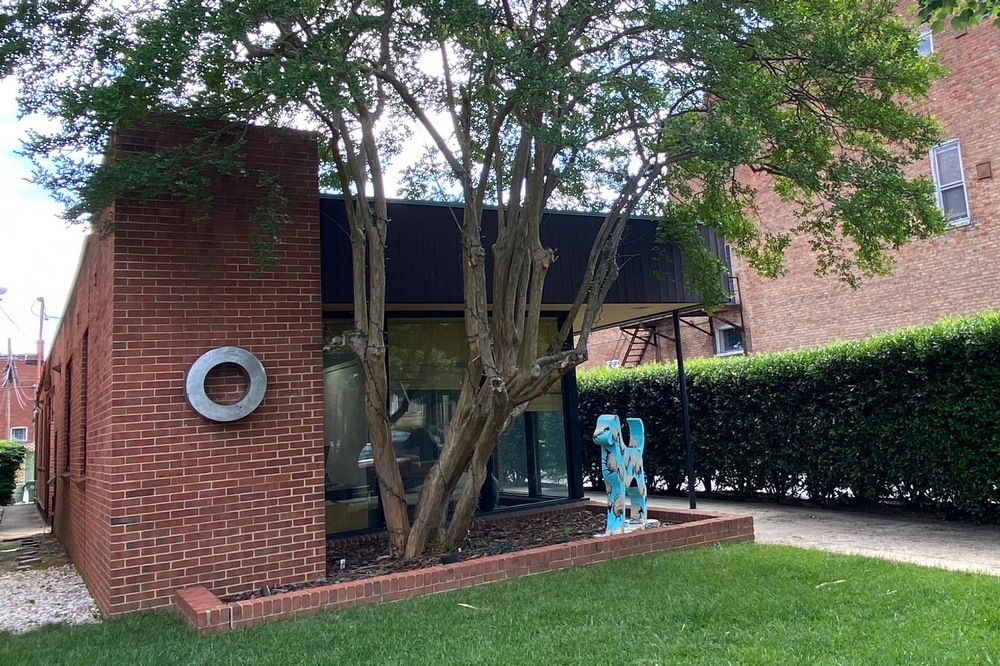 Unlike this thumb-in-the-eye of a home that I’m amazed got approved. I generally LIKE modern architecture, but not this one and certainly not this one HERE. Where was the Monument Avenue Preservation Society when this was built?

The Monuments – What’s Left of Them 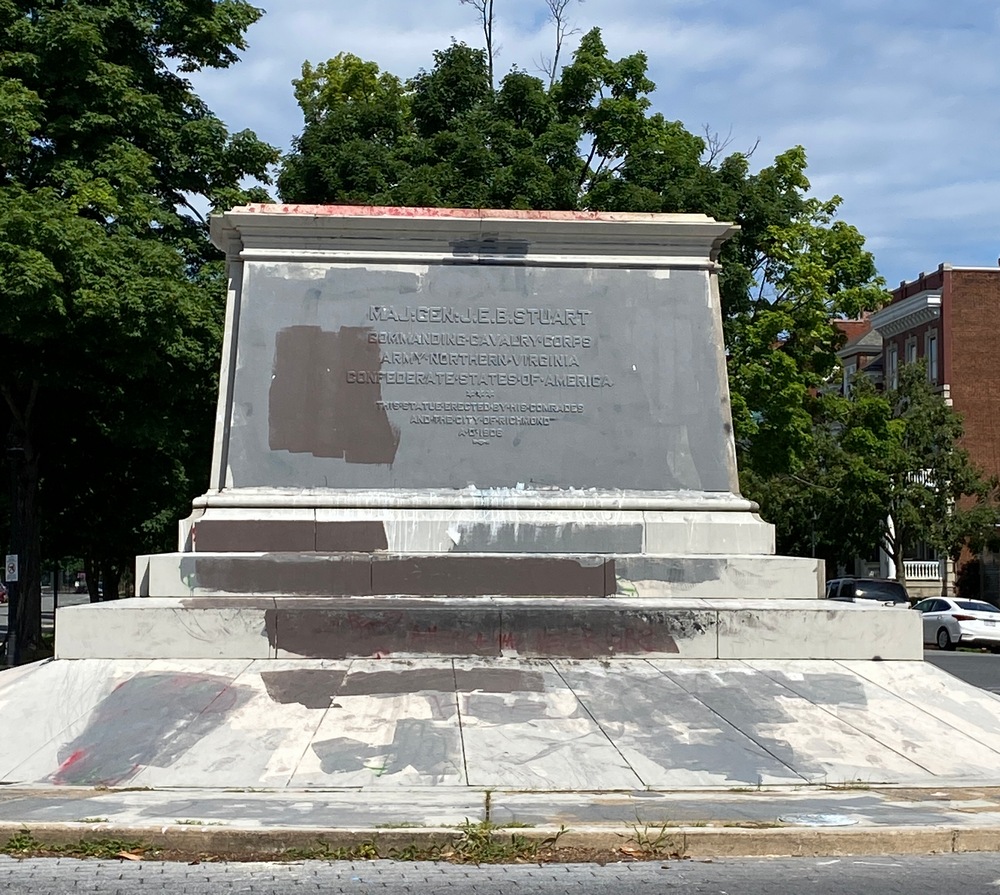 What to do with the Confederate statues is still being decided.  Here’s the latest news of Virginia’s design committees and Supreme Court deciding the future of the statues, all but one already removed.

Above, where the JEB Stuart statue once was. 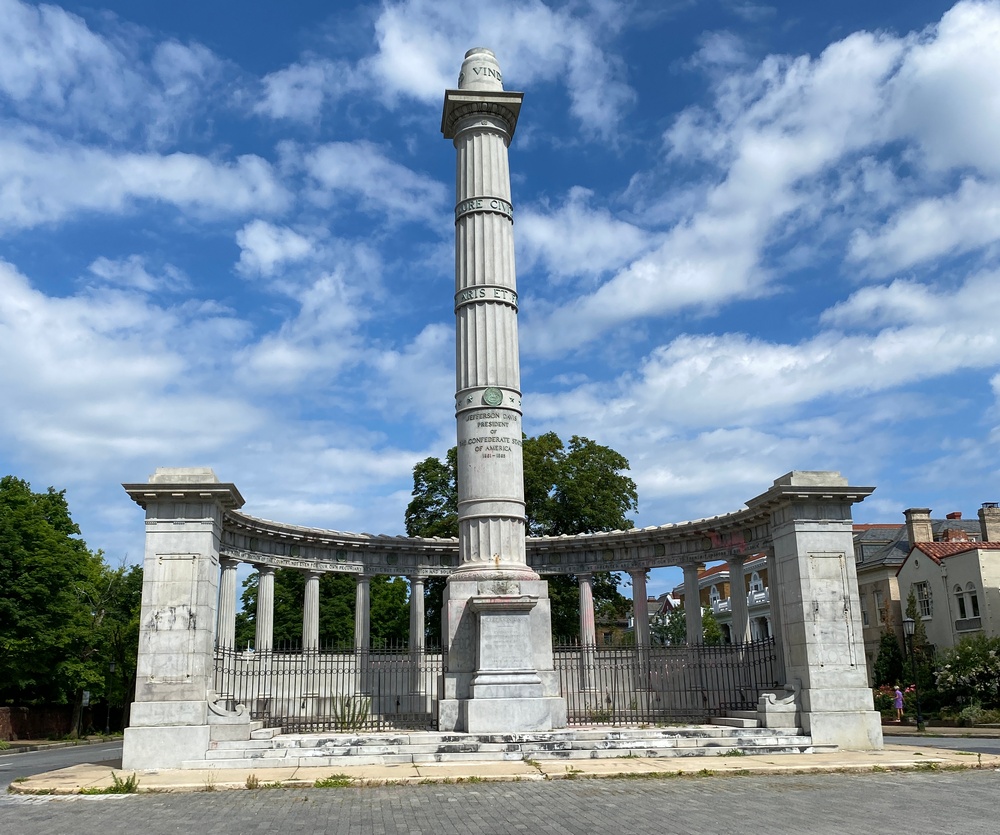 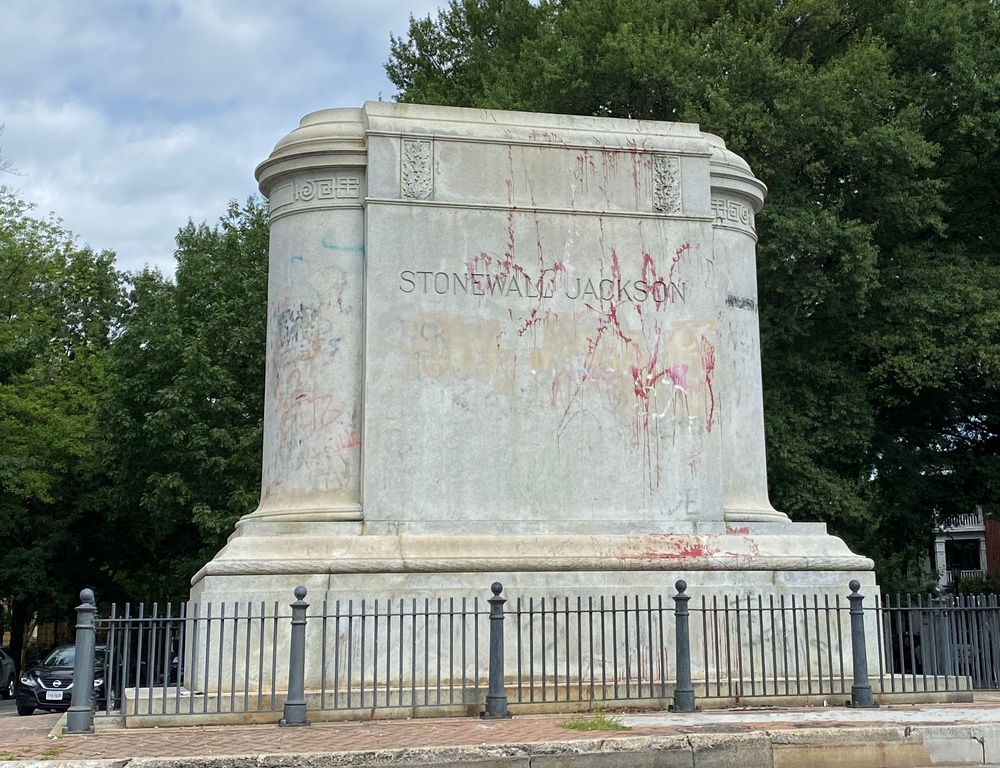 Plinth for statue of Stonewall Jackson. 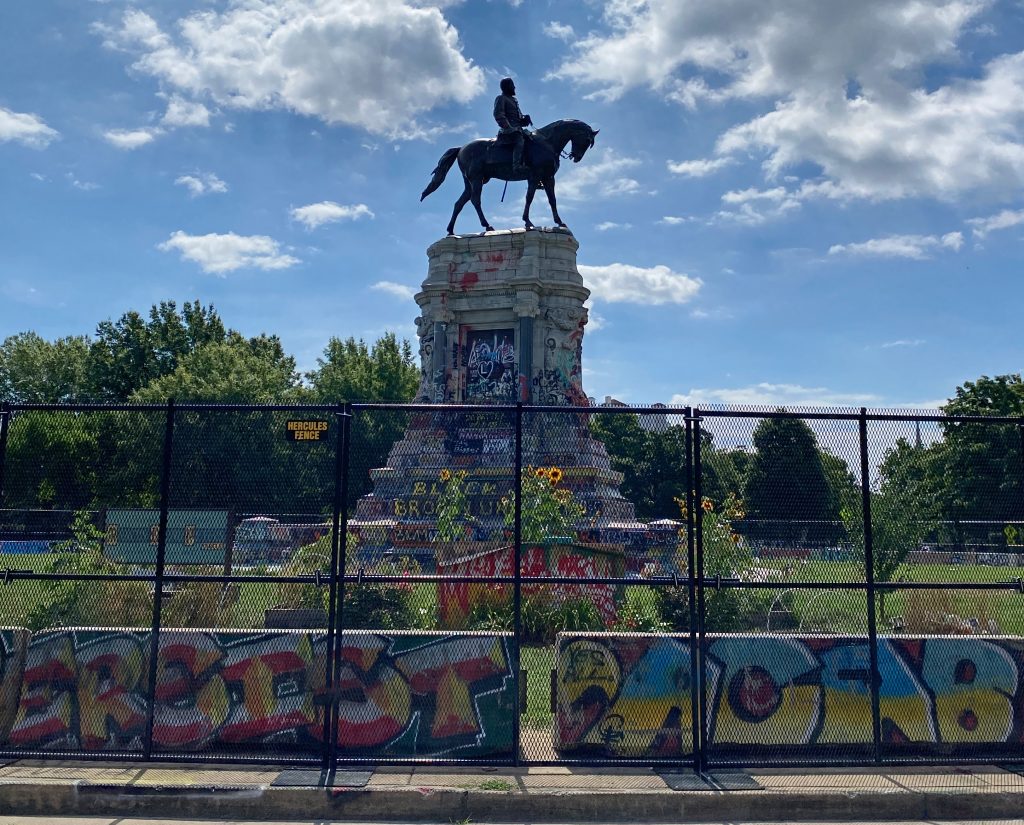 The biggest shock to this Richmonder was seeing Lee still standing, surrounded by fencing and graffiti.  Governor Northam says it’ll be removed as soon as possible.  But to where?  Not decided yet. 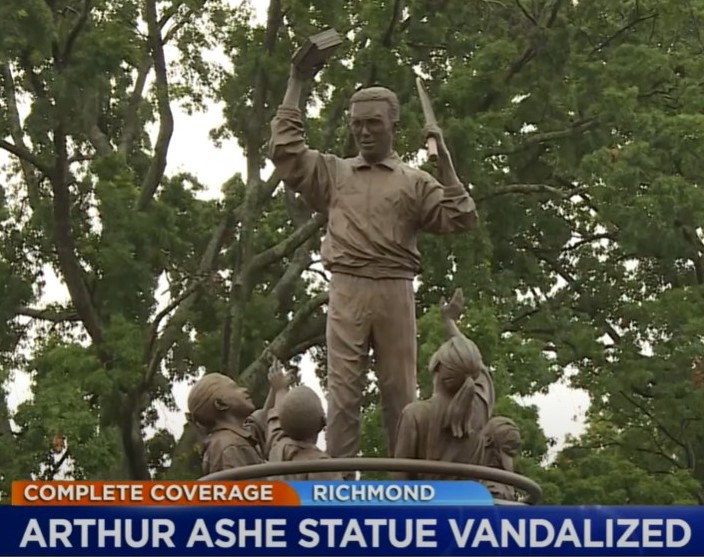 In my tour by bicycle I neglected to go far enough west on the avenue to the Arthur Ashe statue, unveiled in 1996, three years after the death of this beloved Richmonder. During the race-related protests of 2020 someone wrote “White Lives Matter” on the base of this statue, causing Ashe’s family to suggest moving it for its own protection. They’ve since decided to let it remain in place.  So glad! 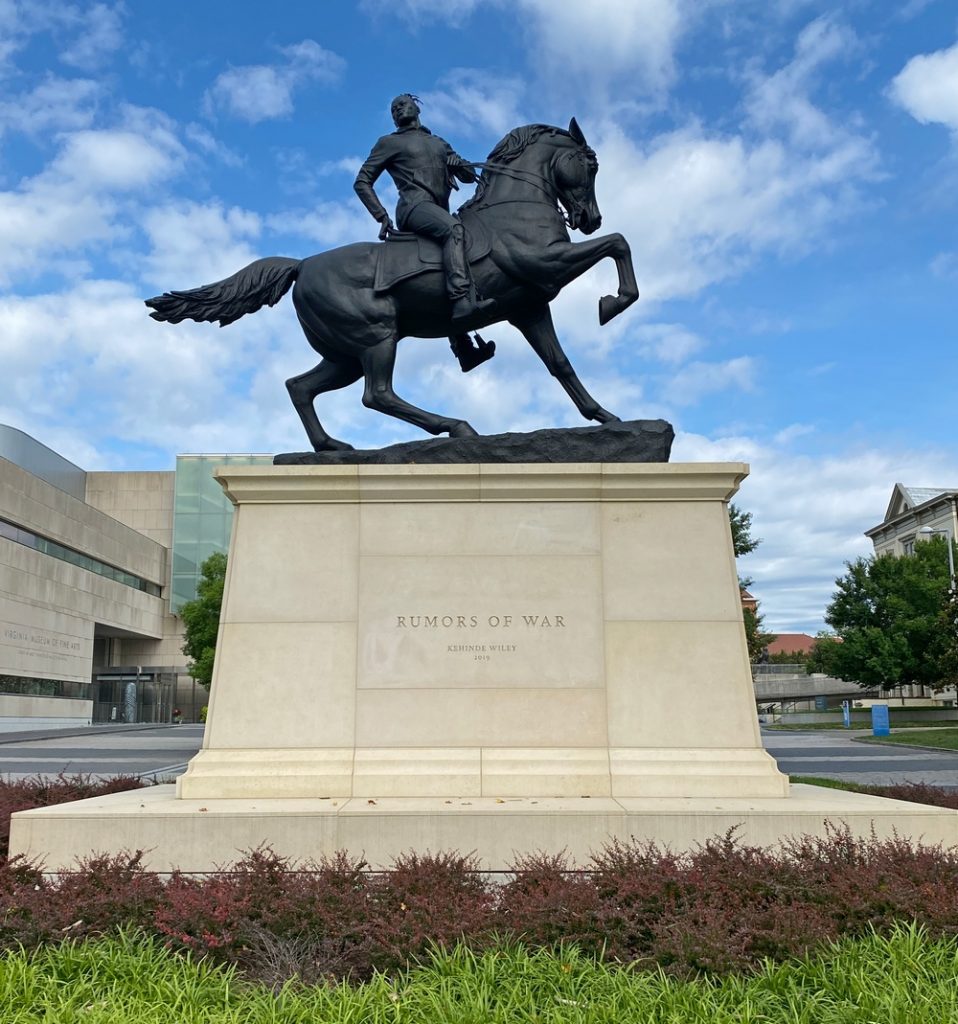 Richmond’s most recent use of statuary to make a point about art and representation is this “Rumors of War” statue by Kehinde Wiley, who’s most famous for painting this portrait of President Obama.

It mimics the style of Confederate statuary with the cheeky subject wearing what’s called urban street garb and dreadlocks in a bunch. It’s on the grounds of the Virginia Museum of Fine Arts. just 3 blocks from Monument Avenue. It was installed here in 2019.

Drone photo credit of the avenue from this video.