We all deal with empty nests at some point in our lives. In the world of robins, that book opens as they create their nests in stages requiring hundreds of trips into our fields and gardens.

Robins  define spring, new life. They build their nests inside out. They first haul thicker grasses and twigs to a site to rough them out, carefully work in some mud to seal them, then add finer pieces of grass, maybe even some twine or shreds of cloth. A nest requires about 350 separate pieces of construction material, each three to six inches long. All that work done to long established avian standards.

The robin book stresses that their handiwork is called a nest, but it’s really a nursery, and soon to be a too-tight fit for Mom and the kids. As with many Mothers, she does the foraging and heavy lifting to build that sanctuary, smoothing it all out with one wing as needed.

The nest-building will take days, all that devotion necessary before those baby-blue-eggs are deposited to complete the tableau, the whole process repeated two or three times a year.

Nests will be perched anywhere from five to 20 feet high, mostly in shrubs or trees, although in our back yard one landed on a metal shelf just inside a long open shed, a site a little more functional than romantic.

We didn’t notice the construction phase of the project. What we first saw was a robin’s nest resting on that shelf just a few feet away from where we hung our many gardening tools and parked our garden golf cart. 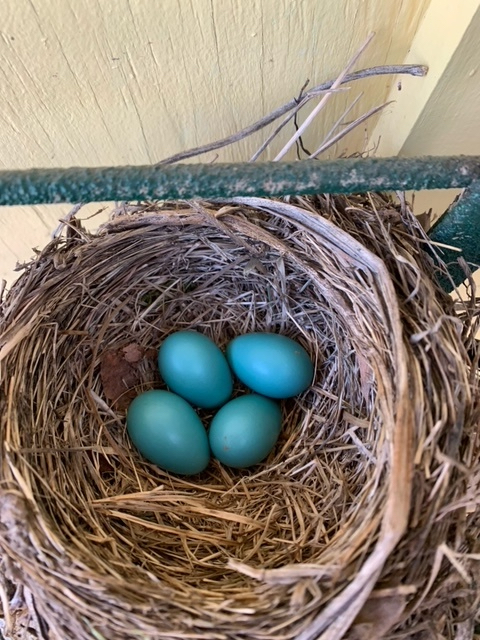 The nest was a carefully knit, circular work of art resting between metal supports and a hose nozzle beneath a sassafras, a paw paw and a towering Kentucky coffee tree.

We couldn’t move the nest.

So we moved the golf cart, tried to minimize tool usage and settled in to watch Mom and Dad – his role mostly in support services. It all became very personal. One day there was one baby-blue egg in the knitted amber nest, then two, then three, then four. Nice colors, that. Bonding had begun. Shared parenthood lurked. We were all family.

We read of the dangers. If Mom or Dad got too upset or flustered by human presence they could and would abandon nest, eggs and kids. We tried to be careful, staying some distance away for days at a time. We couldn’t totally resist, but only peeked in the nest when neither bird-parent was home, although probably lurking close by.

Mom was very flighty at first, fleeing if anyone got within 20 feet, then she settled down. She would silently mother her eggs for hours, diligent and motionless.

This went on for at least 10 days. Then another peek in the nest showed four teeny-tiny, hapless featherless creatures at its bottom. Next up, four yellowish, wide-open beaks reaching above the nest waiting worms, water and whatever.

But—and maybe because we stayed away—we saw little of Mom or Dad flitting in and out with food or drink. It was worrisome, but what did we know of raising robins?

This led to a study of the grim robin-survival statistics. Between nervous parents, snakes, owls, rats, cold weather and lack of good food, barely 25 percent survive for a year.

I began to feel guilty about all this.

Should we human parents have stayed totally away?  Should I have purchased worms and presented them on a platter as some gardeners do. Worse – when were these kids going to be ready to leave home?

When next I peeked into the nest those four beaks were still thrust above a parentless nest. The last time I looked three of the baby birds were gone and the fourth lay dead in the nest. He was buried in our back field with full avian honor 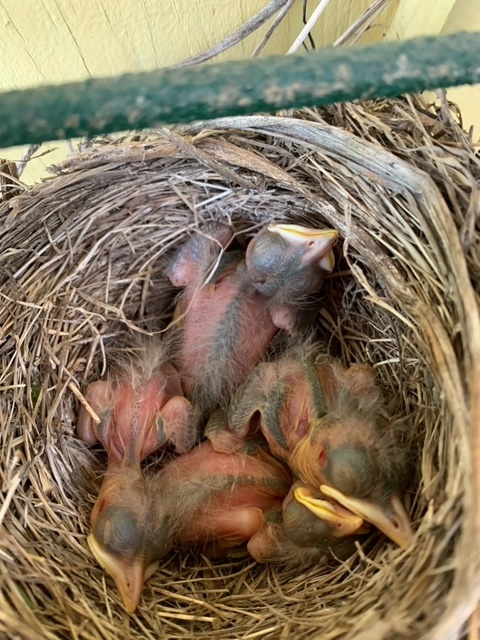 We had no real idea what happened. The possible good news is the other three robins just outgrew their nests, as all creatures do, and left. Robins become fledglings at about 10 days, pop down to the dangerous ground. They will stick around for a while getting eating and flying lessons from Dad, then off on their own.

In our yard, the three could have found some needed shelter from hungry varmints beneath nearby red bottlebrush buckeyes, a weeping blue spruce or even sprawling yellow epimediums.

Meanwhile, Mom, as robins do, may have already gone off building another nest. I didn’t look for her three fledglings for fear of creating more problems, but I’m now sure that’s the case. I know they are safe. Mother Nature, by necessity, can be very practical and cruel, but surely not in the spring of 2021 that’s been so otherwise joyous and giving.