A Rose…By Any Other Name?

I have suffered a series of severe afflictions ever since yesterday when a friend of mine forwarded to me a paper called, Restoring Indigenous Names in Taxonomy. My symptoms have included heart palpitations, headaches, depression, anxiety, wooziness, and drunkenness. It’s possible other things are going wrong too. Things I’m feeling but haven’t quite been able to understand or describe. Like my internal organs are swapping functions with each other. I don’t know. Like I said, I’m still trying to find the words, and I’m not altogether uncertain that some of these things are happening for other reasons. Such as sixty years of high stress, unhealthy living.

I’m clearly not well. Yet, even in my low present state, my hair is still better than Boris Johnson’s.

But mostly the cause of all this suffering is that damned paper, which was written by two New Zealand professors, Len Norman Gillman and Shane Donald Wright. Of course, I immediately googled them as people do these days. Each has written more papers than I’ll ever read. Very accomplished. Obviously smart. And they look like nice guys too. I can easily imagine that the three of us would have a really good time together if we hung out. I might even try to friend them on Facebook. So it is with this in mind, along with a withering awareness of all the countless mistakes I’ve made in my life which are kept forever fresh by an appalling succession of new ones, that I hesitate to disagree with them. And, yet, I am compelled. The fact is, the premise of their paper—that we should replace many existing Latin binomial specific epithets for plants and animals with the words indigenous people would have used for them—is heartless. It’s cruel. It’s crazy talk! And I don’t mind saying I liked both Gillman and Wright’s work much better back when they were in Pink Floyd.

Finding new mistakes to make while trying to survive a pandemic.

I’m certain their intent is well-meaning. Paraphrasing here, but the gist is that this monumental, worldwide effort would acknowledge that in the mad rush to name things post Linnaeus, nomenclature almost always ignored, and even sometimes openly mocked, the indigenous people who lived in intimate association with these organisms. While I have no direct knowledge that this is true, it’s easy to imagine that it probably is, and, if it is, I agree that this situation needs addressing. But I also hope and pray that we find a better way to achieve that than by upsetting the entire binomial apple cart.

Already, there is a motley frontline crew of us—zoologists, botanists, horticulturists, animalists, and maybe some others—who suffer daily at the hands of psychopathic taxonomists who routinely and whimsically rename shit just because they think it’s funny. What I think, what to me is the only possible explanation, is that they just flat get off on imagining the looks on our faces when the news comes down that they blew up the genus Aster and what fell back down from the sky was Symphyotrichum, Eurybia, Galatella, and Doellingeria. And for a decade or more now, geneticists have started to poke around and make trouble based on genome sequencing and other things they try to explain and I pretend to understand.

So, I respectfully ask everyone, everyone in the whole wide world, is another excuse to rename things really the best use of our time? I mean if we’re really thinking big picture and watching the lists of crises grow longer every day, and if we’re laying awake at night desperately trying to conjure up solutions like any sane person who compulsively dwells on stuff does, is making scores of already stressed out and struggling worker bees go back and re-learn things they already knew at the expense of maybe learning new things truly our best way to achieve progress?

I realize that life in New Zealand is different from here. It’s nice. Really nice. And I believe it’s possible for people there to get a little bored. Maybe Gillman and Wright are two of maybe ten people on the planet who are actually looking for things to do. Despite not having experienced boredom since age twelve, I can sympathize with that. I only hope they can imagine the constant stress that many of us endure every day because of too much work, too little time, and because some of us are at best incompetent and at worst complete charlatans. And I hope that, the scales thus having fallen from their eyes, they can foresee the humiliation I will suffer at future International Plant Propagators meetings when I utter the only name I ever knew for a plant and somebody, probably Paul Cappiello or one of his ilk of seemingly good-natured, helpful illuminati, corrects me with the newest one! (How does he always know?) 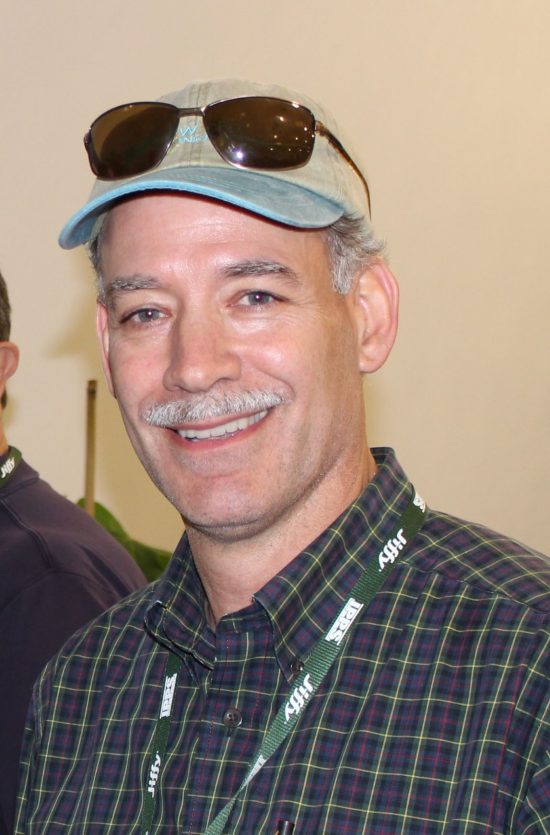 Paul Cappiello at an IPPS Regional meeting several years ago. Devilish grin, no doubt, from having just corrected my pronunciation of Zanthoceras. And also my pronunciation of pinot noir. And later on, savoir faire. No idea why I tried to use that expression. Dumb!

But let’s pretend for a minute that this whole thing has nothing to do with me and my lifelong battle with insecurity. Let’s consider if this idea is even feasible, because, let’s just face it, we’re going back to common names here. Old, barely remembered, indigenous vernacular. If the Inuit have over forty words for snow[1], then how many words for oak did the Shawnee have? Which one do you pick? Shawnee descendants will probably want you to choose their favorite. Taxonomists will want you to choose the one that is hardest to pronounce. Descendants of the Erie will surely want you to pick theirs.

And where do you draw the line on what indigenous even means? For instance, could the Goths claim to be indigenous? Could they start dredging up their dreary Goth names and start filing petitions to make them official? Lord, I hope not, because I hate Goths. Our neighbor’s kid was a Goth, and he trudged all around here like some kind of skinny, dark puppet. And played depressing, loud music all night. He’s now a Silicon Valley millionaire, by the way.

The beauty of Latin, the gorgeousness of it, is that everyone despises it. Equally! It’s a completely awful, repulsive, dead language. The only people on the planet who could even possibly claim it are the Italians, and they hated it so much they invented Italian. Even the Catholic church only took 1900 years to rid themselves of it. 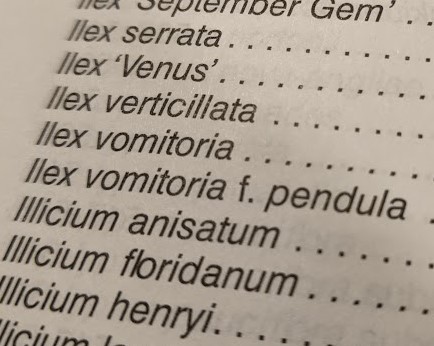 But unlike Latin, indigenous words could be landmines. They aren’t detached by time and made cold and  impersonal by years of being italicized and being spoken by scientists. They might be deeply tied to dead or dying cultures and maybe injustices and atrocities. Some words might even be sacred. If some dope on the bus of a conference tour happens to pronounce Cercis with a hard “c,” sure, they’ll be mocked without mercy. And, then, thinking they learned a lesson, and, hoping to avoid further humiliation, they go on to pronounce Celtis with a soft one, there will be even more hilarity at the guy’s expense. But, because it’s only Latin, none of it will be personal. No one really cares except the guy being mocked. But if that same dope botches the pronunciation of a sacred word, or if he should use the Shawnee word whilst among those who had passionately lobbied for the Erie one, well, someone could get chased out into traffic! 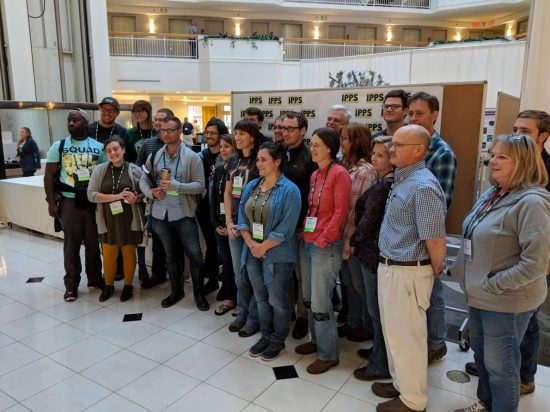 An IPPS gathering in Delaware a couple years ago. These people may look pleasant enough, but they’re vipers. If you should botch a name… Vipers I tell you!

Finally, there is this to consider. Given the median age of horticulturists, taxonomists, botanists, zoologists, animalists, and some others is, like, 85, please realize that asking them to learn a whole new vocabulary would be like trying to explain to your Grandpa how to copy a url to his browser. Over the phone. In time to save his life. Or like giving Grandma and Grandpa a new remote. Amazon Prime next day delivery. Comes in a box they can’t open that came out of another box they couldn’t open. No instruction booklet. You see it now? Seriously, it would be more compassionate if you just lobbed a grenade in their window.

Mr. Gillman. Mr. Wright. I want to apologize if my reasoning has ruined any chance of your proposal succeeding, and if my logic has likewise crushed all the hopes and dreams you had built around it. I hope you know I’m just looking out for those who haven’t got the strength to learn new names for all the plants and birds and rocks and things. In fact, if you invite me to New Zealand. I’ll prove my goodwill by buying the first round of beers. And, I swear, I’ll keep you entertained. Sometimes intentionally. More often, not.

And I’m not one to knock someone down and just walk away. So I would like to offer another way forward. Rather than re-write binomial Latin, Gillman should talk Wright into writing a book that captures all the indigenous names that can still be found and then connect them to as much culture and natural history as possible. That, I am sure,  would be a fabulous exploration of natural history, anthropology, and more. It would certainly be a more efficient way to learn this stuff than by trying to patch it together from a smattering of re-scripted specific epithets looked up in some future edition of Stern’s Botanical Latin. Write that book, and I’ll buy it. But I’m not ready to buy a wholesale overhaul of Latin binomial.

A fine book, but nowhere near as good as the one Wright is going to pen.

[1] Just so you know, I know that this notion that Inuit have over forty words for “snow” is a myth. At least that’s what I’ve heard.