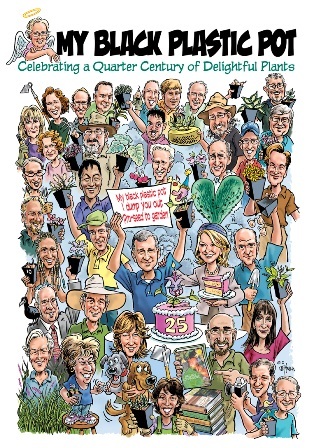 Tony Avent’s beloved garden and his Plant Delights Nursery in North Carolina have many mentions here on GardenRant, all favorable. We’ve reported on visits in person, and we were thrilled to be included in the cover of the 2013 catalog (the four original Ranters are in the upper left).

So no one here takes pleasure in reporting on the public outcry over the 2021 catalog, though it sure deserves it.

But judge for yourself. (Comments contrary to fact will be removed.) 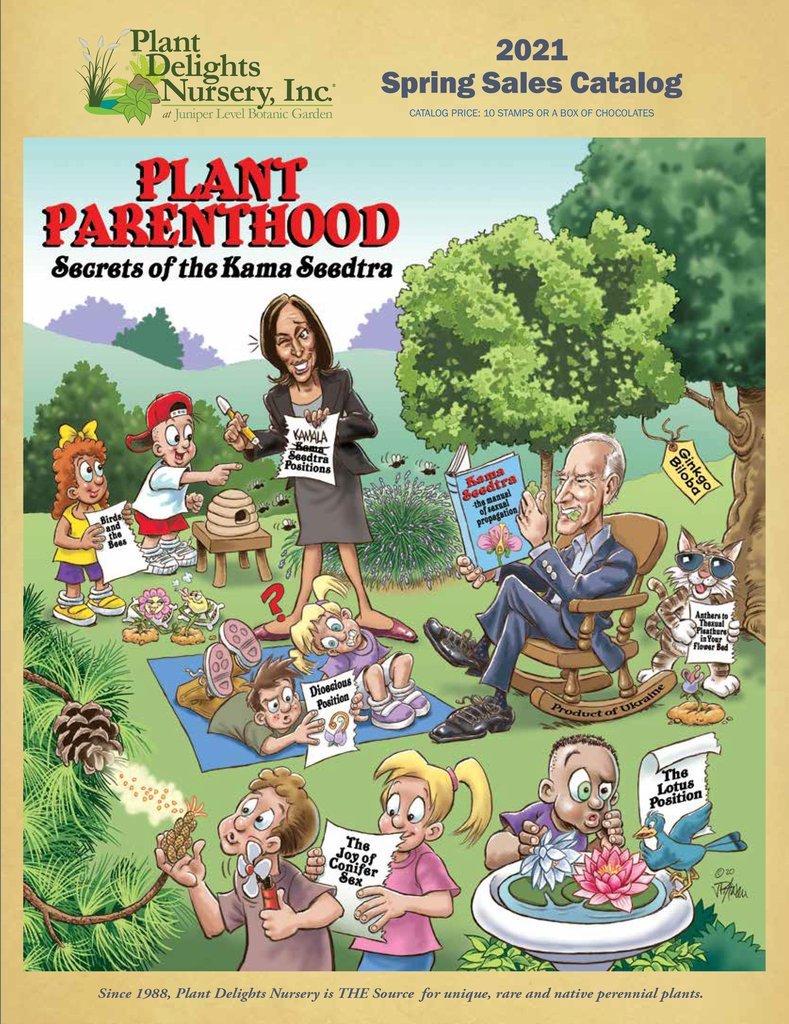 Hundreds of people expressed outrage on the Plant Delights Facebook page – go read for yourself – but the response is expressed well in this letter to Avent from Washington Gardener Magazine’s Kathy Jentz (and a GardenComm leader):

To: Tony and Staff of Plant Delights

I considered myself an admirer of yours — writing this letter was both painful and disappointing that it has come to this. I wanted to let the content of the Spring 2021 Sales Catalog cover go by without addressing it, but my conscience will not allow it.

Over the last few days, I have read the comments on your social media and your responses to them. What is worse to me than the original artwork, is your lies about the artwork’s content and patronizing tone.

You maintain that the cartoon art depicts just a “grandfatherly figure” explaining the birds and the bees to kids. How I wish that were so! The “product of Ukraine” inscribed on the rocking chair, the depiction of Biden chomping on ginkgo leaves, the portrayal of Harris with a leering wink, etc. all show the truth. In plain fact this is meant to perpetuate several despicable Q-anon conspiracy theories about the president, vice president, and the Democratic party as a whole.

Perhaps even worse than the art and the lies about your intent is the timing of this publication. It hit my mailbox the day before the inauguration. This was no coincidence and after the events of January 6, my only conclusion can be that you support these domestic terrorists — or else you would have followed up with a retraction postcard or slapped a sticker on the cover at the mailhouse before it went out.

What is truly head-scratching to me is that this is a business. Clearly though, you care more about perpetuating dangerous lies and stoking political divisions than selling plants.

I pray you come to your senses, apologize, pull the artwork, and hire a PR team to clean up this mess. Until then, remove me from your mail list.

Hi Kathy,
It’s time to put an end to the disheartening controversy over our 2021 spring catalog cover. We apologize to anyone who was offended since this was the opposite of our intent. For the last quarter-century, our covers have been horticulture-themed current events satires, this one with a theme of teaching plant reproduction.

While we regularly use politicians and public figures on our covers, there has never been any politically leaning intent. There is also no intent to portray racism, the abuse of children, or anything else which we find unequivocally abhorrent.

Simply stated, our cover was designed before the election. We did not anticipate the deepening of wounds that occurred around and after the election. Please accept our sincere apologies, as this is a time that we all need to reflect, to heal, and to move forward.

2020 was an incredibly eye-opening year that finally opened the eyes of so many people who thought they were colorblind. As a nation, we need to direct outrage about racism where it actually exists, where people are being discriminated against or treated differently because of the color of their skin.

We have spent decades making sure our business is welcoming to all people, and those who visit will see our dedication and success in this effort.

We regret and are disappointed that anyone applied meaning to the catalog cover that was not intended.

Let us all continue to fight societal injustice with passion, but also take time to listen, understand, laugh, and love.