The lawn is not in danger 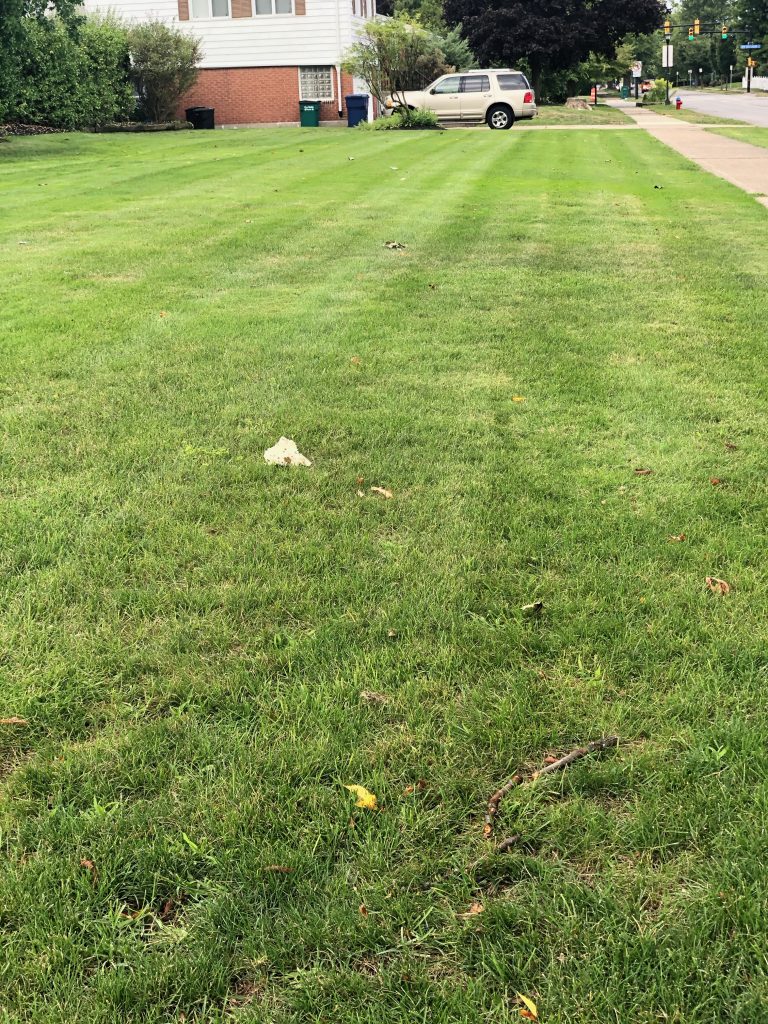 I didn’t need to go as far as the suburbs to get this shot.

Not by a long shot. Every now and then, one of the Ranters publishes a post on the benefits of having a lawn and strategies for responsible lawn maintenance. Far from objecting to these posts, I heartily agree with them. When free of needless herbicides and fertilizer and mowed at a reasonable height, lawns do provide rest for the eyes and recreational space for people and animals. I have no problem with them, though I do like to see them accompanied by healthy stands of perennials and shrubs, with a tree or two thrown in.

It’s the framing of the question that I find disconcerting. Do lawns really need defending, as this post implies?

Are they becoming scarce? Are people with lawns being persecuted or ostracized by their neighbors? Are gangs of lawn abolitionists roaming the cul de sacs of suburbia, torching every lawn they see? No. This is not happening. And, sad to say, the words of enlightened industry professionals and naturalists about the problems associated with lawn culture are, for the most part, not being heard by those who need to hear them most. Don’t feel bad, my friends; there is no need to worry about scaring or shaming lawn-proud homeowners. They are not listening to you and they don’t know who you are.

Lawns continue to thrive throughout most suburban and many urban areas of my region, Western New York, and I suspect that this is true throughout the US. If I were to look only at the gardens of my friends, many neighbors, and everyone on Garden Walk Buffalo, I might think lawns are on the decline. But that view would be beyond blinkered.

We just had another lawn-related incident in our largest suburb, Amherst. A retired university official and longtime environmentalist, Walter Simpson, was reported by his neighbors for allowing Queen Anne’s Lace to grow in part of his untreated lawn area, which also harbors a number of other wildflowers (or weeds: it’s up to you) throughout the season. It’s a “mow what grows” lawn, but the QAL was allowed to remain unmowed during its time of flowering. This endangered it, because it can grow higher than ten inches, which is the height limit in this suburban town for anything in a lawn that isn’t obviously a cultivated flower bed. Here’s a quote from one of several newspaper articles on the controversy: “The homeowner said he and his wife suspect the unnamed tipster is a neighbor whose exacting lawn care includes using scissors to trim wayward blades of grass, [noting], ‘That’s not an exaggeration.’”

The QAL was never removed because the town decided—after many phone calls, emails, and other lobbying efforts by the Simpsons and others—to consider an appeal from the homeowners. Here’s a link to the final article that leads to the 3 or 4 previous articles.  It didn’t hurt that Simpson was a high ranking official in the area’s biggest university; he’s used to getting things done.

I’ll be honest; I couldn’t care less about Queen Anne’s Lace. I do admire the Simpsons for maintaining an untreated lawn—which clearly harbors many other plants than turfgrass—in an area where lawns are still worshiped, with governmental ordinances in place to back that worship up. My point is that cases like these arise on a regular basis throughout the country. There is always an enlightened cadre ready to fight lawn culture—as with the Simpsons—but I am pretty sure that lawn adherents consider these people kooks and radicals. And I am afraid these lawn adherents are—by far—in the majority, with, for the most part, the law on their side.

We can murmur kind, gentle assurances that lawns are OK “as long as …” all we want. It won’t help people who don’t have the juice to fight City Hall.