The Earth is Burning. Now Enjoy Chestnuts over the Fire 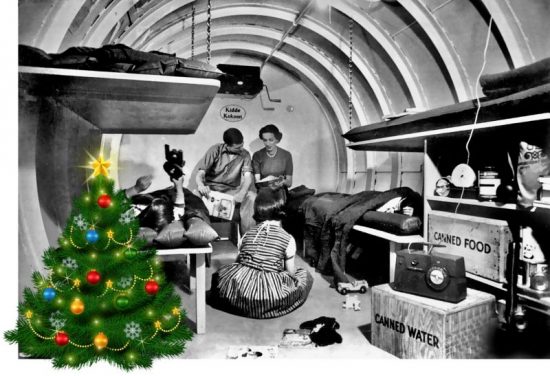 What does “gardening like there’s no tomorrow” really mean?

Do you think your garden, and earth, can avoid the ongoing sixth mass extinction? The U.N.’s recent “bleak” climate report may put a damper on holiday joy.  Believe science or not? Truth or dare? I think about my garden every day but worry only occasionally about actually going over the cliff.

Let me put the limits of personal control and “eco-anxiety” into perspective.

The Russians were going to bomb America into smithereens in the early 1960s. When I was in grade school, the rush was on to stock Do-It Yourself Shelters with water and canned soup beans. Mrs. McCann polled my 3rd grade class every Monday, for weeks, and asked how many families had made progress on their bomb shelters. (Watch this excerpt from the 1982 documentary film, Atomic Café.)

I was scared out of my wits, worried that everyone else in my class might survive the nuclear apocalypse without me. I begged my father to build a bomb shelter. Dad argued that we would be okay without one. I asked, “How?” My father was remarkably sensible, never one prone to hysteria. “We’re going to go down to the basement with a couple of bottles of whiskey and a carton of cigarettes and take our chances.”

Can we similarly stall global warming, put off the sixth mass extinction, and continue gardening for awhile?

Without political leadership, sufficient clean water, shifts in lifestyle and agriculture, a substantial adoption of sustainable energy sources or some miraculous technological breakthrough, I am not sure.

I’ve got an all-electric car, 60 solar panels, and I have planted thousands of trees over a lifetime. I’ve piled up a lot of Boy Scout badges, trying to be a good earth steward, but it’s not enough.

I can’t slow rising temperatures, loss of species, melting glaciers, drought or rising seas by myself, any more than I can stop a colossal asteroid from slamming into my back yard.

I’m sweating it out.

I’m trying to channel my late father, hoping I can divine some way to survive living on earth.  What would Dad think? He was generous, worked hard, lived modestly, and didn’t get bogged down in existential thinking. Yet there was always a lot on his mind.

How to Change Your Mind, Michael Pollan’s book on psychedelics, explains how the author gave up control for a few hours, and expanded his outlook, during several guided hallucinogenic trips. To turn on and escape with psilocybin, LSD or crystallized Sonoran toad venom would not have crossed Dad’s mind. My father was a man of reflection, but the concept of enlightenment was too fuzzy for him. Paying bills was fulfillment enough. Dad took a load off with an extra drink or two on Saturday nights. He listened to Ella Fitzgerald and Oscar Peterson on the turntable, and sometimes got a little loopy, but seldom missed Sunday 8 a.m. communion.

I have been keeping up with Dad, lately, via paranormal smoke signals.

Whiskey and psychedelics won’t bolster confidence if you’re stuffed in a musty shelter, even for the sixth ongoing extinction. (I enjoy bourbon, but I went to a cockfight on acid one time, and it was not a good trip. A claustrophobic corner of the basement, probably won’t be tempting, either, even if you add grow lights and cackling, laying hens.)

So, Hell’s bells, put your feet up this Christmas season.

Warm your toes next to the not-so-earth-friendly open fire, built from the remains of ash trees killed by emerald ash borers.

Start dreaming about a white Christmas and next year’s garden; make a bourbon Old Fashioned; please order Funky Little Flower Farm, and listen to Nat King Cole sing “Chestnuts Roasting on an Open Fire,” while plumes of carcinogenic wood smoke and CO2 drift up the chimney into the cold and starry night.