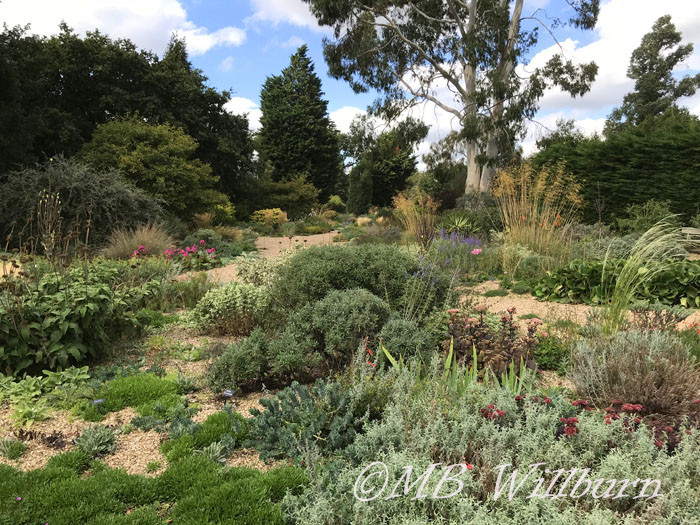 Beth Chatto’s Gravel Garden built on the remains of an old car park gives hope to gardeners everywhere that matching the plant to one’s conditions can spell success.

Given the choice of dinner companions at an industry event, with fourteen topics on the table and the wine flowing softly and smoothly, Scott Beuerlein would be at the top of my list. He is entertaining, clever, and charmingly self-deprecating — and an excellent conversationalist.

That’s why it pains me greatly to say that he has his head right up his smart ass.

When, in his July/August column for Horticulture[1], he advocated for the total abandonment of British garden writers by American gardeners, and went so far as to tell the late and sainted Beth Chatto to “bugger off,” he no doubt knew he’d get some pushback.

And as it happens, I’m just in the mood.

“Brit garden writers have had it so good for so long!” he wailed. “[Their] books, gloriously illustrated…filled with classic design ideas and expert care instructions – are naught but works of deception. They have brought us Yanks nothing but suffering and heartbreak.”

Beuerlein’s passionate words went on to decry the injustice of meconopsis. Christopher Lloyd’s name was taken in vain. A Big Gulp was inexplicably referenced.

“Just sell your damn books to the Australians,” he ended. Or at least he should have done.

I am not a British garden writer. But I admit to a dog in the fight in that I hold two passports.

Although one of them will no longer be looked upon with favor in European airports after Brexit (the other one never was), I have a certain fondness for the country.

I went to university there. My son was born there. I developed a deep and abiding love for gin and tonics there, and have recently begun guiding other like-minded souls around its great gardens under the auspices of CarexTours.

These admissions might crush all pretense of neutrality if it were not for the following statement: I am not and never have been an inhabitant of the Pacific Northwest — the only region in North America whose populace can guzzle from the well-spring of British garden literature and never taste bitterness.

Instead I live in Northern Virginia, bitterly cold in February, life-suckingly humid in July.  Each year we are offered the promise of an English spring and then delivered an Amazonian summer.

Oh yes, I have tasted the bitterness. Big frothy gulps of it.

And yet my shelves are overflowing with the very best of the Brits. In addition to scores of excellent books and articles penned by American garden writers, there lurk the Vereys, the Chattos, the Lloyds and the Dons. Three shelves are given over entirely to British garden essayists, and I admit to the profligacy of international subscriptions to Gardens Illustrated and Country Living UK.

And Scott, here’s why: 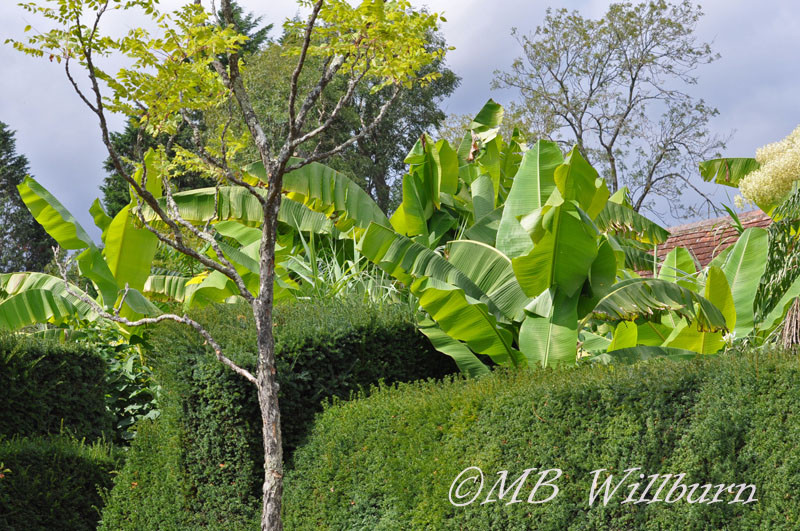 Musa basjoo towers over the century-old yew hedge at Great Dixter, where in 1993, Christopher Lloyd shocked the establishment by ripping out roses and planting an exotic garden.

Christopher Lloyd was as caustic & clever as Dorothy Parker, but as loveable as Ogden Nash. Chatto beguiled us with the humble words of a self-taught gardener, but won ten successive gold medals at Chelsea and created a global masterpiece in the Essex countryside. Monty Don (as author, not as television sex symbol and international man of mystery) writes with a sensuousness worthy of Coleridge:

There are peaches to be eaten warm from the brick of the wall they are grown against, peas picked off the tendrilly plant and shucked straight from pod to mouth…tomatoes waiting to release their own musty muskiness as teeth break their skin.[2]

When he starts undressing figs with his fingers I need a moment to compose myself.

Wit is an elusive quality in gardening prose. There are millions of outrage merchants out there, but it’s quiet, clever criticism that gets my attention – and keeps it. At this the British excel.

There are some gardeners in whose company I feel vulgar.  They will expect you to fall on your knees with a magnifying glass to worship before the shrine of a spikelet of tiny green flowers…yet will themselves turn away disgusted from a huge, opulent quilt of hortensia hydrangeas.[3]

I confess to being unattracted to the concept of gardening with a moral implication. It puts a dampener on going all out to garden full-bloodedly in whatever way appeals to you most.[4]

The best British garden writers have honed the ability to inflict dagger-sized wounds with the prick of a pen. Even when it’s your own ideologies that lie bloodied and martyred, you cannot help but smile. 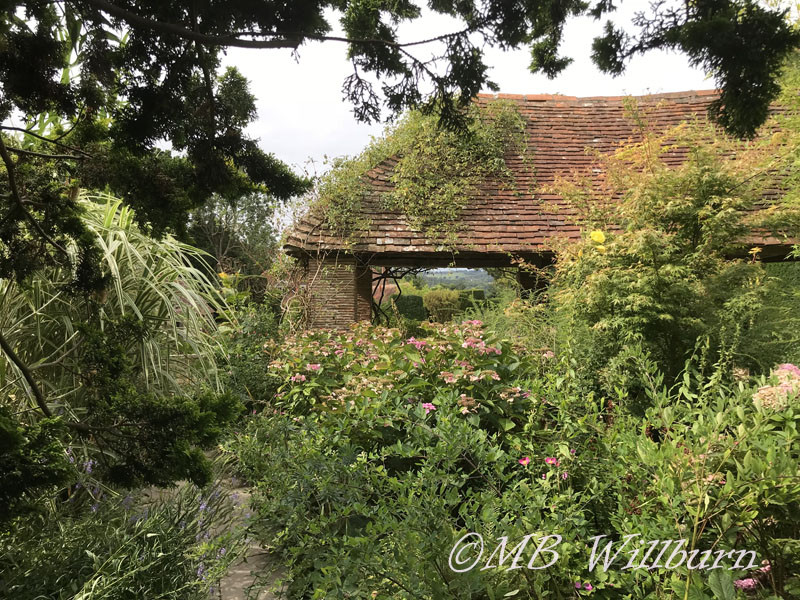 An abundance of foliage and flower leading to The Hovel at Great Dixter.

Gardening as a cultural premise

The British population is presented at birth with a trowel and a bit of twine. They are also presented with a packet of Bishop’s flower and sternly told to call it Ammi majus. Thus the population is primed and ready for garden writers who won’t have to waste precious time explaining what a cold-frame is before they can explain what to do with it.

The British don’t have to vainly search an HGTV channel to find a bit of G. Gardening programs run freely through their radio and television networks, their streaming choices, and quite possibly through their dreams at night.

This premise results in a different approach toward garden writing. Authors don’t need to claim that “it’s easy.”  They assume you know it may be difficult, but it’s worth it.

In the words of St. Beth:

If Damp Gardening sounds like hard work, I can assure you that, unless Nature provides for you, initially it is…But when it is successful I think it is possibly one of the most beautiful forms of gardening.[5]

We’re frightened to do this as American garden writers. We know we’re often holding people by the fine thread that connects ‘lifestyle’ to ‘the garden.’ Saying “it’s difficult” could send them over to scrapbooking.

They’ve simply been doing it longer. Their gardens are older. Their tools are better oiled. There is nothing television-worthy about a rumpled and grubby Monty Don; except, there is.

We can chafe and grumble at such cosmic injustice and lash out with words like ‘stodgy’ and ‘predictable,’ but Lloyd was never predictable, nor is Noel Kingsbury, nor Dan Pearson, nor Keith Wiley. And they get to apply all that generational knowledge and exciting innovation to gardens that sport stone walls older than a bit of Brooklyn Brownstone.

Scott, sometimes we need a bit of envy in our lives. We need inspiration. We need something that, by its sheer sumptuousness, primes the engines within us and gets us moving.

Something that gets us thinking. Gets us creating. Makes us fall in love again.

That’s Christopher Lloyd’s Flower Garden, Hugh Johnson’s The Principles of Gardening, Rosemary Verey’s The Making of a Garden; and, I have no doubt, Jimi Blake & Noel Kingsbury’s new book A Beautiful Obsession.

Have you ever read Hugh Johnson, Scott?  You’d think the man wouldn’t have time to pen clever words about magnolias with the amount of French wine he’s quaffing from his veranda in central France.  Johnson’s words could ignite envy in the Dalai Lama. 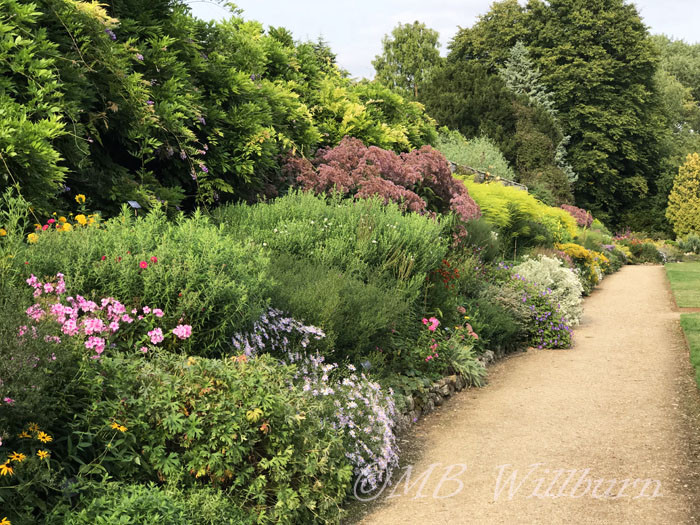 The long border at Waterperry Gardens in Oxfordshire on a sunny September day.

The only thing better than reading Monty Don is listening to Monty Don read Monty Don.

That’s got to piss you off, Scott.

I understand. A Cincinnati short-a accent grappling with ‘clematis’ just doesn’t have the same…well…gravitas.

Sure, these people garden with the sweet Gulf Stream at their backs and beautiful French plonk just a day-trip away. My garden no more resembles theirs than Vita Sackville-West resembles Mama June.

But then, my garden doesn’t resemble Jenks Farmer’s gorgeous farm in South Carolina either, or Nan Sterman’s xeriscaped designs in Southern California. This is, after all a big country.

I study their words anyway, and try Farmer’s crinums when winters are kind, and Sterman’s agaves even though they never are. I appreciate Henry Mitchell’s wit and the grace of Elizabeth Lawrence, and lap up anything Andrea Wulf is serving on either side of the Atlantic.

We take what we can from each of these authors – British or American – and feel connected in our shared passion. Particularly over a very large gin and tonic.

Sometimes those are the very best ones.