Blight-resistant American chestnuts and genetics as tool for forest renewal

If you have ever donated money to a cause or even just signed an on-line petition, I’m sure that your inbox, like mine, is flooded with email solicitations.  Mine mainly relate to environmental causes, and I find that they really help to keep me up to date.  One I received the other day, though, concerned me.

The message came from the Global Justice Ecology Project, and it celebrated the fact that two board members of the Massachusetts/Rhode Island Chapter of The American Chestnut Foundation had announced that they were resigning.  The reason? They refuse to participate in an organization that is supporting the release into the wild of genetically engineered American chestnut trees.

I share the concern with the uses that are being made of genetic engineering to breed new plants.  To date, genetic engineering in the botanical world has been mostly a hand maiden to the worst kind of agribusiness.  “Roundup Ready” food crops, plants engineered to tolerate that herbicide so that farmers can apply more glyphosate to their fields, seems an abomination to me, for example.  But I think that genetic engineering is a tool so powerful that it will be used. That’s why I believe that rather than turning its back on it, the environmentally responsible gardening community must take a role in determining its use. I also believe that the application of genetic engineering to American chestnuts is an outstanding example of the good that it can do.

In a better world, the forests of eastern North America would care for themselves and evolve naturally.  In fact, though, they are under unprecedented threat from imported pests and are suffering biological impoverishment as a result. The history of the American chestnut (Castanea dentata) is a classic instance of this.  An Asian fungus – the so-called chestnut blight — introduced on imported nursery stock at the turn of the twentieth century over the next half century virtually extirpated a native tree that had occupied an estimated 25% of the area of the eastern forests, and had provided a primary seasonal food source for many kinds of wildlife. 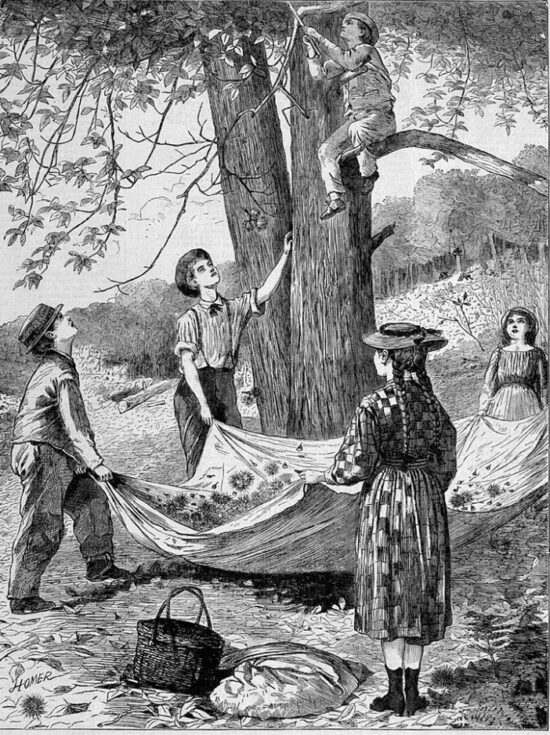 Harvesting chestnuts was a common source of income to rural families before the blight  https://commons.wikimedia.org/w/index.php?curid=64263459

Efforts to breed a blight-resistant American chestnut began at least as early as 1922, but the tools of classical plant breeding are blunt and success has continued to elude the chestnut advocates over the succeeding century.  Many of the plant breeders’ programs sought to transfer the genes for blight resistance from Asian chestnuts to specimens of the American species.  This was achieved laboriously by transferring pollen from the flowers of one species to the those of the other and then back-crossing the resulting hybrid offspring with more American chestnuts to create a tree with Asian resistance and at least the appearance of our native tree. The rest of the efforts sought blight resistant American chestnuts among the survivors of the blight.  Even when killed back to the ground by the disease, American chestnuts may send up shoots from their roots for a long period of time, and these remnants have occasionally survived long enough to produce flowers.  Essentially, chestnut researchers have hoped to locate a genetic mutation (another sort of genetic transformation) among these survivors that would confer resistance to the blight. 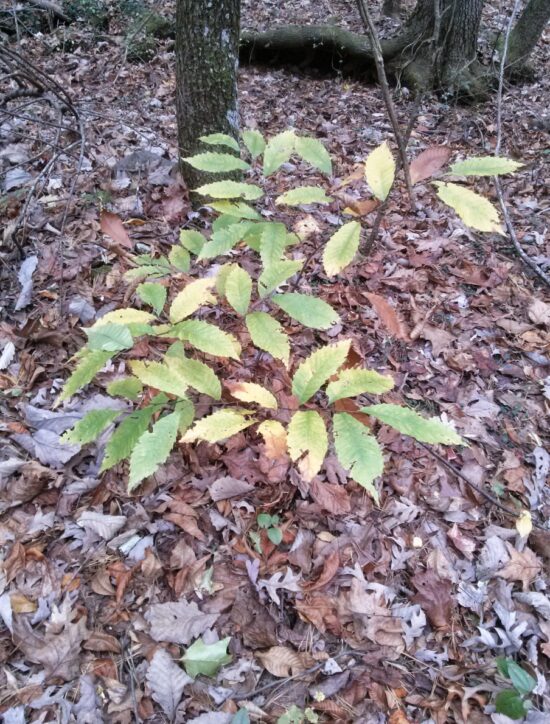 The important point is that every one of these efforts to restore the American chestnut to our forests has depended on altering the genetic material of the tree.   And in this respect, the program to genetically engineer a blight-resistant chestnut, which involves the transfer of a single gene naturally occurring in wheat, involves far less disturbance than the programs of traditional plant breeders.  What’s more, the genetically engineered tree has demonstrated a robust resistance to the disease, something that has not yet been achieved by any of the other efforts.

My New England woodlot has lost not only its chestnut trees, but also its elms, and is losing it ashes.  The beeches have been reduced to mere sprouts by a disease spread by an imported aphid.  A handful of warm winters should be enough to bring the hemlock woolly adelgid a few miles further north, and then I will bid good bye to my hemlocks.  The situation is desperate, and I believe that the villain, Homo sapiens, must do what he or she can to remediate it.  Alternatively, of course, we can wait for new plant communities to evolve naturally, but that would be a process of millennia.

This is not a tool that we can afford to ignore.