If there was a 12-step program for gardeners like me, I would begin each session of course by introducing myself to the room and then admit to my addiction:  I love the look of a freshly dug and raked bed.  The fine, brown loam, all the clods broken into crumbs, the smooth, billiard-table-flat surface, is synonymous with spring in my mind. 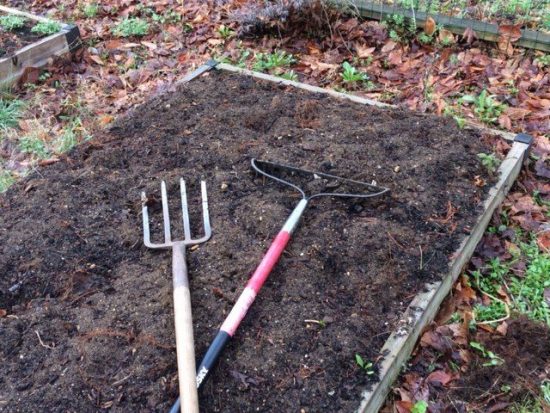 I picked up this appetite as a student at the New York Botanical Garden, from the old world gardeners who had brought it with them from Italy and Germany. Theirs was a tradition that extended back to the 18th century at least. That’s when Jethro Tull (the farmer not the rock group) popularized the notion that the fertility of the soil depends on pulverizing and aerating it.

In fact, such cultivation can lead to a temporary boost in fertility, for incorporating more air into the soil will speed the decomposition of its organic portion, which  releases a short-lived surge of plant nutrients.

Long term, however, the effect of such practices is to deplete the soil.  In fact, the most prevalent problem I have seen in garden soils during a 45-year career as a horticulturist is a nearly universal deficiency in organic matter.

Robbing the soil of its organic content has another, far more serious consequence. When practiced widely enough, this sort of humus-squandering agriculture leads, as I learned from a recent New York Times article, to releasing huge amounts of carbon into the atmosphere: 135 billion metric tons since the beginning of the industrial revolution, by one estimate.  The impact on global warming has been significant.

The alternative, as described in the article, is something called “carbon farming,” which is a collection of techniques designed to store carbon in a stable form in the ‘pedosphere”(the outermost layer of the earth which includes the soil).  A lot of these measures are not adaptable to gardening, but others, including the reduction of tillage and keeping beds blanketed with cover crops when not in use by food crops, certainly are.

Will transforming my vegetable gardening techniques have any measurable effect on the atmosphere?  Obviously not, and yet it’s something I need to do.  It can make my garden an example of what is possible, and maybe an inspiration to others.  I have always thought that gardeners are ideally poised to become leaders of environmental change in their communities.  If every garden club and organization were to take up this cause, the consequences could be enormous.  Anyway, as the 12-step manuals teach, the only behavior you can actually change is your own.