A couple of weeks ago, I had the privilege of attending a lecture sponsored by the New York Botanical Garden, and it was eye-opening. The speaker was Cassian Schmidt, who since 1998 has been director of Hermannshof, a combination botanical and trial garden situated on six acres of in the hill-town of Weinheim north of Heidelberg.   This garden has been redefining the European concept of naturalistic design – Piet Oudolf is one of its disciples – yet it isn’t on the radar for most American gardeners.  That should change.

I’m a member of a generation of gardeners that was raised to venerate the English horticultural tradition. The impact of this has been useful aesthetically – British gardeners such as Christopher Lloyd had much to teach us about the use of color and the construction of artistically sophisticated perennial and mixed borders. But meanwhile the Germans, whom American gardeners have largely ignored, were exploring the intersection of aesthetics with ecology, developing a very distinctive style that we could well afford to study. 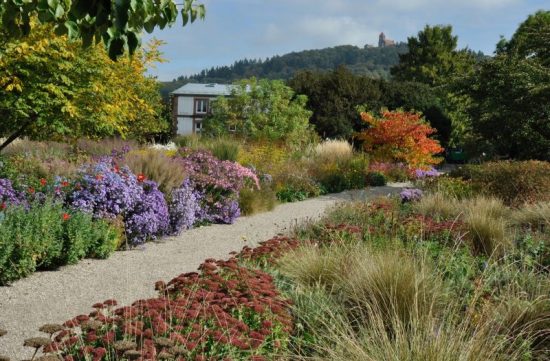 As described by Cassian Schmidt, the Hermannshof style involves the study of natural habitats and then echoing them in garden design.  This style is quite distinct from our American naturalistic planting in that it does not emphasize an exclusive use of native plants. Instead, as I understood it, the German tradition, at least as expressed at Hermannshof, will combine plants from similar habitats all around the world. Thus, a steppe-inspired planting would be likely to include not only plants from Central Asian grasslands but also from the South African veld and North American prairies.

For this reason the German naturalistic planting is not an ecological restoration but rather a derivative. As such it doesn’t offer the same value to wildlife, but it can offer more aesthetically than a straightforward restoration. Examples of this distinction can be found in Piet Oudolf’s designs in the gardens of the High Line in New York or at Lurie Garden at Millennium Park in Chicago. 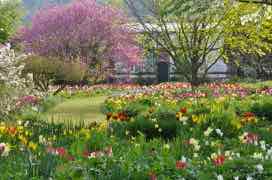 It’s significant that both these examples are set in urban locations where reconstructing a native planting would have been Quixotic at best. But if the German-style “New Perennial” gardens do not offer ecological authenticity, they can provide sustainability. If the habitat-model selected is well suited to the site, then the plants drawn from habitats of this sort will all be adapted, and, experience at Hermannshof has found, tend to co-exist comfortably. Indeed, years of studies there have found that such ecologically-inspired plantings flourish with just a fraction of the inputs of material and labor required by similar-sized conventional perennial plantings.

This is a compromise worth considering.

All photos courtesy of Cassian Schmidt