Though not a big theater-goer, I HAD to see the comedy  “Native  Gardens” when it played in DC because it’s about next-door neighbors representing different demographics and attitudes toward gardening. I’ll admit that I laughed, but the stereotypes in the play – of people and of plants – bugged me no end. 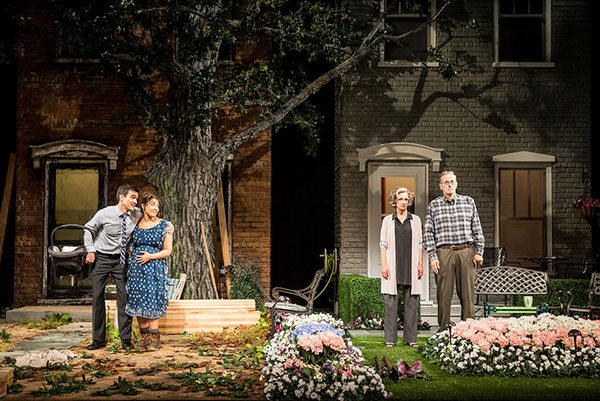 First, the dueling couples. The people on the right are passionate about their garden, involved in the local gardening community, and enter their garden in the Potomac Horticultural Society’s garden contest every year. They’re old, white, a defense contractor and a retired bureaucrat, and just in case we’re not sure what to think of them, we learn that they’re Republican. Are they representative of gardeners today or negative stereotype from another era? Either way, I’m offended.

The couple on the left are the opposite in many ways, and clearly the darlings of the playwright and the audience. They’re young, Latinos, a successful lawyer and his PhD candidate wife who advocates for native plants and preaches loudly about how terrible the neighbors’ plants are. You know, hydrangeas and azaleas. “Your plants are hurting the environment!” she proclaims more than once. 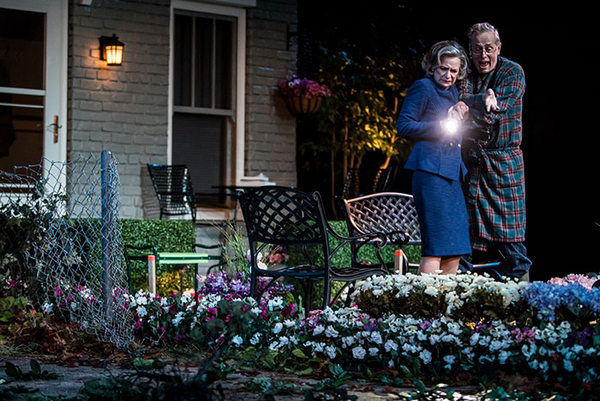 They all agree on one thing – that the chainlink fence has to go!

The saving grace in all these stereotypes is the use of the young couple’s Latino origins to enlarge the topic beyond plant origin to human origin. When the older man claims he should be able to continue to garden on some land that turns out to belong to the neighbors, he claims “squatter’s rights,” going against his presumably anti-squatting grain. And when the older couple accuses the native-plant supporter of being anti-immigrant, her retort is that nonnative plants are colonialists who arrived here to conquer the indigenous population. Clever! 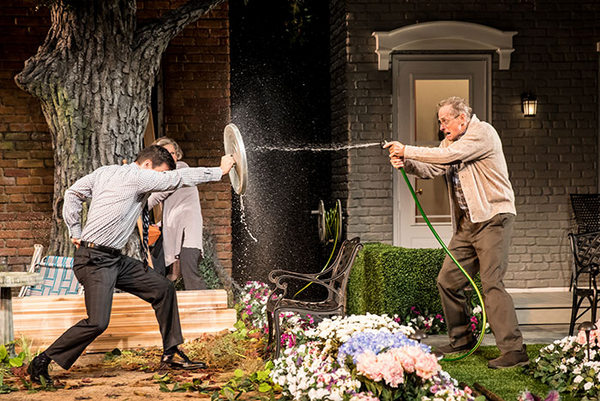 Mexican-American playwright Karen Zacarias is perfectly suited to addressing the characters’ different national origins. Whether she’s suited to tackling disputes over plant origins is another matter. According to this article, the dueling gardener idea came to her at a dinner party.

The two families have different ways of gardening and it’s about the culture of gardening and the politics of plants. It’s a big-hearted comedy with a lot of sharp little teeth in it. By focusing on plants, we are able to discuss so many different things going on in our culture right now and our country right now.

But where did the playwright get her understanding of plants, native or otherwise? Her representative declined my request for an interview so I don’t know, but she DID write three book recommendations into the play, in its most preachy moment. The older couple (and the audience) are told they should read:

Now the Tallamy book is an obvious choice but Garden Revolution is about meadows, so a surprising choice for urban audiences. But truly misguided is the selection of Del Tredici’s book defending invasive plants in urban settings. The three books are promoted in the theater lobby and website, and the DC Public Library is credited with helping the theater choose the books, which are also recommended on the library’s website. There the book descriptions confirm my suspicion that the book-picker hadn’t actually read them or was too unfamiliar the topic for the job.

I’ll stop ranting now and end with an interview with set designer Joe Tilford, whose research into garden styles and plants is pretty interesting.

The Butleys, on the other hand, have been winning horticulture club prizes for their garden, though never the top prize, just honorable mentions.

“This is not an award-winning garden,” Joe said. “This is an award runner-up garden.”

To get a feel for what that meant, Joe consulted with a garden competition consultant. (“There are such things,” he said.)

The consultant told Joe that Frank Butley would probably force his plants to grow in such a way that they became a thick mass of colorful blooms. Unnatural, even.

The conflict between what is unnatural and what should be natural “is really important in the play,” Joe said. And the gardens — on one side a lush lawn, neatly trimmed hedges and compact flower beds; on the other, weeds and dirt — become the battlefield.