But there was more.

A hundred yards downstream, I could make out rock sculptures—dozens of them. They looked, from a distance, like cairns—unmortared rock piles. I wandered down a slippery slope toward Big Rock.

A modest, young man explained what he was doing. “Piling up rocks,” he said. His stacks were fascinating, but I wondered if he realized the next heavy rainstorm was going to knock all of his work back to the Silurian streambed, if kids or the park authorities didn’t topple them first. 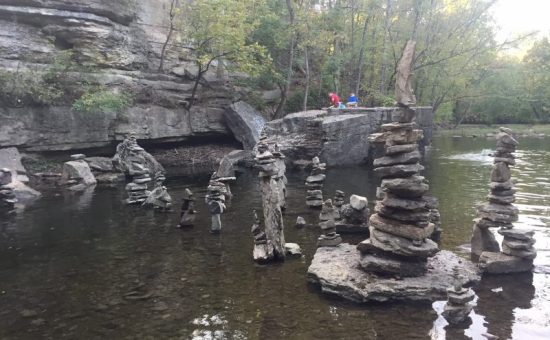 He wasn’t concerned. His palette of creek and fieldstones was laid down 435 million years ago, so why should he be worried what might happen over the weekend or the next millennium?

The young man introduced himself as Dennis (“like the Menace,” he said). Dennis, a 24-year-old apprentice pipe organ refurbisher, wasn’t noticeably menacing, unless you find either rock piles or the Beatles annoying. The Beatles were singing Love me Do, from a large boombox. The sound quality was terrific. Eight Days a Week soon bounced off the steep and massive limestone outcrop. Dennis took a big gulp from a Bud Light Tall Boy. It was a sweltering late afternoon. 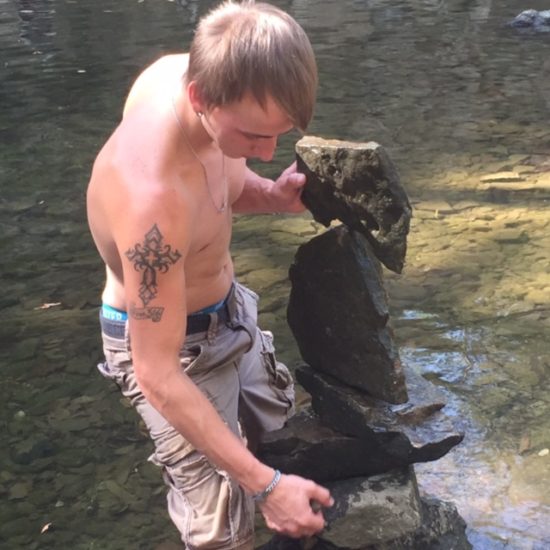 I asked if he’d ever heard of Andy Goldsworthy, the English sculptor and installation artist who works with found, natural pieces. Dennis had never heard of Goldsworthy but promised he’d look him up.

Dennis had never stacked rocks until this past May. Whenever time allowed this summer, he returned to Big Rock. He had assembled 110 rock towers by late July.

Rocks come and they go.

Fifty sculptures were flattened by heavy rainfall in August.

Dennis stayed at Big Rock on Friday night well past dark. He kept company with hoot howls, crickets and frogs. “I love the solitude,” he said.

Young kids, splashing in Beargrass Creek, knocked down several more sculptures on Saturday. He didn’t scold them. They were having fun; Dennis was, too.

Sixty sculptures survived the kids and the Planet X apocalypse over the weekend, but they may not survive this week.

Some park visitors complain that Dennis is creating an eyesore. His “towers” alter the scenic nature of Beargrass Creek, they argue. 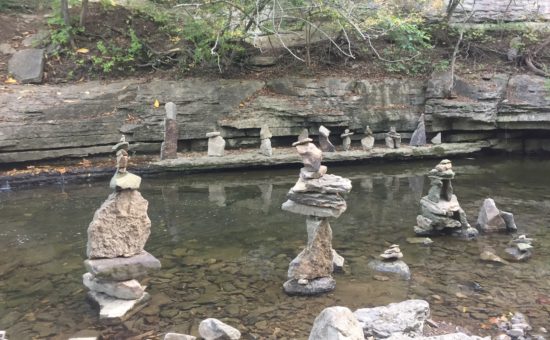 There is a growing art vs. nature argument about built rock piles. Critics worry that streambeds, beaches and trails could become cluttered with such piles. Biologists worry that moving rocks along streams create a disturbance to invertebrates that hide under the creek stones.

Louisville’s 120 Metro Parks, including Cherokee Park, suffer occasionally from too much love, and a chronic lack of sufficient funding for maintenance and enforcement. Bathrooms get vandalized; rocks, buildings and benches get tagged with graffiti.

Park users jump curbs and park their cars off road in the shade of large trees. Cars compact the soil, preventing aeration to the roots. Trees suffer.

And there is never a weekend that goes by that Louisville’s parks don’t get littered with trash.

Dennis and his pal John picked up the mess left behind by the mindless and the lazy. Their adopted sanctuary, within one of Louisville’s 18, historic, Olmsted-designed parks, was as clean as any park anywhere this past Friday and Saturday. 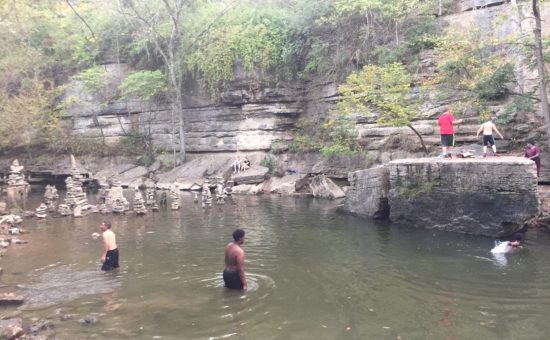 Dennis has quickly developed a talent for building rock sculptures. Again, he built his first one just four months ago. He can’t imagine that anyone would view his rock towers as a threat to nature. He means no harm.

Dennis will move on eventually. He’s more talented than he realizes; he’s learning.

He’s no menace. And there’s certainly no worldwide scarcity of rocks.