Moose in my garden: the tracks are proof

I’ve posted before on this blog about the attraction of wildlife tracking in the garden.  Garden wildlife, I noted then, reminds me of teenagers – the critters eat distressingly huge meals then typically leave without communicating about what they have been up to or what their plans are. Reading the tracks is the only way to learn what the animals are doing (would that this worked with teenagers).

I had a notable encounter of this kind this past month.  Something was stomping the plants in my garden.  And for a change it wasn’t careless human visitors.

Over my many years as a horticulturist, I’ve grown accustomed to wildlife attacking my plants, though more often in the form of slugs, beetles and caterpillars nibbling holes in the leaves or even, as in the case of cutworms, decapitating whole seedlings.  On the whole, I find myself better able to tolerate mammalian invaders because, although their individual appetites are far greater, they are also easier to exclude.  A welded wire fence keeps the bunnies at bay.  (By the way, am I the only one who even as a child rooted for Mr. McGregor?  As far as I’m concerned, Peter Rabbit got off lightly.)  A solar-powered electric fence that administers mild shocks deters the deer very effectively, at least in my very rural neighborhood.

Whatever it was that was stomping my plants seemed to find the fence to be no impediment, however.  I was stumped (not stomped, fortunately) until my wife Suzanne found a trail of huge double-hooved tracks.  A quick look at my Peterson Field Guide to Animal Tracks revealed that we had acquired a garden moose. 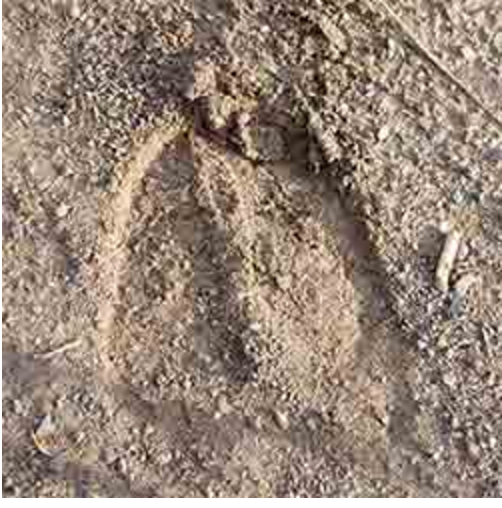 We had seen moose on our property before.  Once, my wife had seen a bull moose with a big rack of antlers in our beaver pond, and on another occasion I had spotted what seemed to be a young male on our dirt road.  The tracks in the garden weren’t distinct enough to identify this visitor as anything other than an adult – almost 6 inches long, the footprints were big enough to blanket the whole heart of a lettuce or Napa cabbage.  Judging from the path it had followed, this moose seemed not to be eating in the garden, just stumbling around squishing things.

The visits continued — I assumed that the long-legged moose was stepping over the fence — until one night when our dog, who was sleeping by an open window, exploded with a fusillade of barks.  This, apparently the moose did not like, for the next morning we found the electric fence torn off its poles where the moose had, it seemed, exited at high speed.

It has not returned since.  I don’t miss the damage to our garden, though I do regret the sense of contact with the wild that the moose brought.  Now that the blackfly season has passed, I may take my tracking guide and make an expedition into the nearby swamp, to see if I can find evidence of the moose on his or her home ground.  I’ll try not to stomp any plants.