Marching for Science, Including the Science of Gardening

Despite the cold rain, Saturday April 22nd was a great time to be walking the streets of Washington D.C.  The occasion for my outing was the March for Science, and there were tens of thousands of self-described nerds thronging Constitution Avenue on the approach the Capitol.  Included, besides myself and my geologist wife, was at least one other plant fanatic, as the photo below demonstrates.  I hope there were more, marching incognito, as gardening badly needs more science. 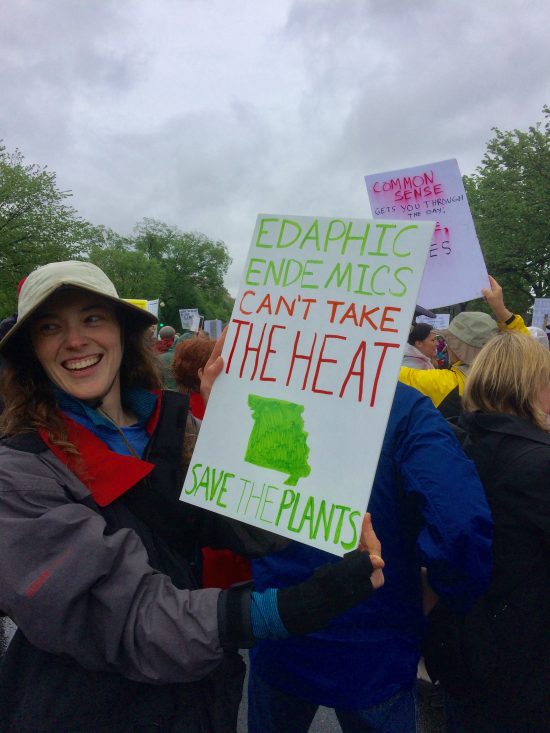 I love the traditions of gardening.  I treasure the sense of being part of a craft whose roots extend back thousands of years.  My pruning knife, for example, is remarkably similar to those that archaeologists have recovered from ancient Roman sites.  Knowing that some ancient topiarius pruned his trees the same way I do fills me with a wonderful sense of continuity.

Yet I take the traditional “wisdom” with more than a grain of salt.  I was taught, for instance, that when planting a tree one had to heavily emend the soil in the planting hole with compost.  That’s how it had always been done.  Yet when in the 1980’s some university horticultural researchers ran scientifically-designed studies, they found that trees typically root better into a new site when the soil is not emended.   I was also taught to take extreme care when planting not to break the rootballs of balled and burlapped trees and shrubs.  However, as I learned recently from Linda Chalker-Scott, this is also a fallacy.  Controlled studies have proven that woody plants generally do far better if you excavate the ball and spread the roots when transplanting.

Who is Linda Chalker-Scott? She’s one of the founding members of the “The Garden Professors.”  Susan Harris shared information about this group just a couple of days ago, so I won’t do more here than to say that its fact-based skepticism is badly needed.   Witness, for example, the persistent assertion that a spray of aerated compost tea is an effective means of disease suppression in plants.  Chalker-Scott actually reviewed the scientific literature on this subject and found that the few scientifically designed studies of this treatment indicate that a spray of aerated compost tea is no more effective as a disease-suppressant, or even less so, than one of plain water.  Yet many gardeners continue to depend on (and spend money on) this treatment.

Why is gardening is so often unscientific?  Why do we so commonly confuse anecdotal evidence – our untested experience — with fact? It may have to do with the history of the field.  Agriculture has a long history of scientific research, but gardening, until recently, did not.  In its absence, charismatic figures moved in to fill the information vacuum, often with unsubstantiated theory and opinion.  Unfortunately, this is a trend that continues today.

Participants at the March for Science emphasized through signs and speeches that we cannot afford to address the many existential challenges that confront society with the superstition and willful ignorance that characterizes so many of our current politicians and policy makers.  Serious problems – global warming, invasive plants and pests, dependence on polluting pesticides and fertilizers, and many others – also confront us in the garden.  We need science just as badly there, too.