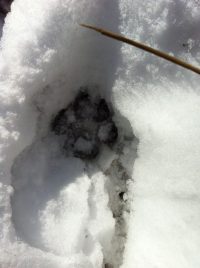 Garden wildlife reminds me of teenagers – the critters eat distressingly huge meals then typically leave without communicating about what they have been up to.   Except in wintertime, when they leave a tale of tracks in the snow.

I’m no great tracker, but with the help of my Peterson Field Guide to Animal Tracks I can at least tell the difference between a fox footprint and that of a dog, trace the travels of the rabbit around my yard, and discover that it is a porcupine that has been nibbling the branch tips off the hemlocks.

It was a string of five-toed footprints, each one not much bigger than a quarter, that told me to keep an eye on the wood pile.  And my vigilance was rewarded one gray morning when I spotted a mink darting in between the logs, then re-emerging with a mouse in his jaws.

It’s a thrill to find evidence of such an uncommon (at least in my garden) species, but tracks of the commonest animals excite me just as much if they have a story to tell.  A red feather and a spot of blood in a small snow crater told me all I had to know about the encounter of a cardinal and a hawk.  And I still remember following the tracks of a Canada goose, its toes dug in and the stride gradually lengthening until, suddenly, the tracks stopped – I felt as if I had taken off, too.

I have to move fast when inspecting tracks.  My Duck-Tolling Retriever, Bridie, is usually hot on the trail, obliterating the evidence as she pokes her nose into each footprint, so if I don’t get there first, all I find is a series of snow smudges.  The visual doesn’t matter to Bridie; she can tell far more from the scent, not only who has been there but when and much more.  Indeed, I suspect she regards my failure to put my nose to the ground as the sure mark of a hopeless amateur.  Which, of course, is what I am, a tracking semi-literate, but I enjoy the stories even so. 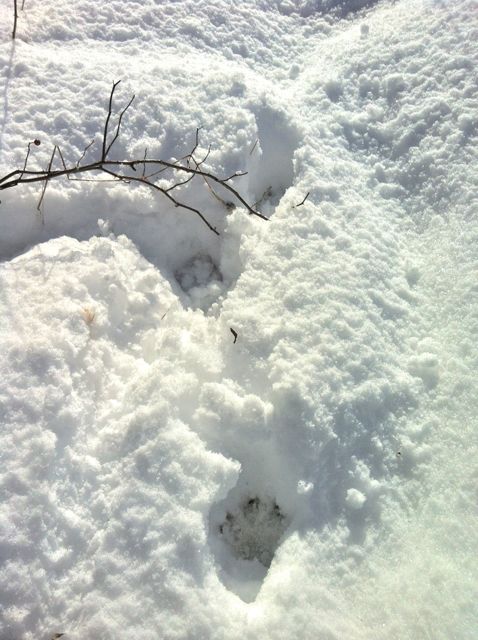