How to Grow Bluebirds 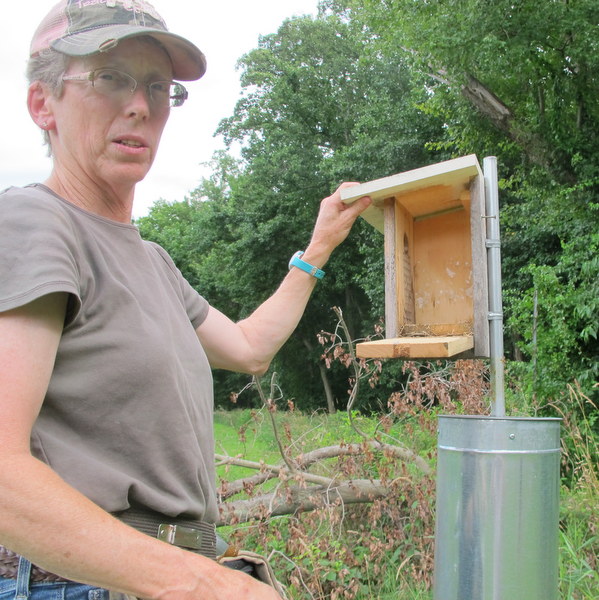 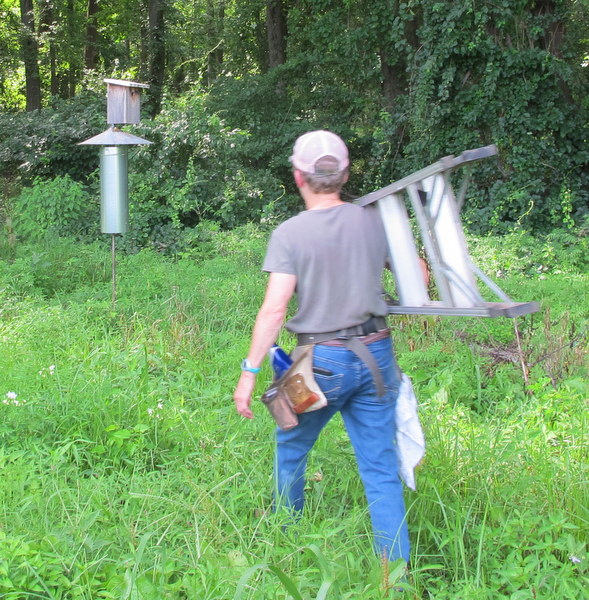 Last Friday I rode shotgun through the Beltsville Ag Research Center in Marcia van Horn’s Ranger as she checked on some of her 175 nesting boxes for bluebirds and tree swallows, with the occasional chickadee, titmouse, wrens or nuthatches taking advantage of the accommodations.

Nest boxes were first installed on the 6,700-acre property in the late ’70s by  Larry Zeleny, founder of the North American Bluebird Society.  (He’s also author of The Bluebird – How you Can Help its Fight for Survival.)  His mission was to bring back cavity-dwelling nest birds, most of whom had been killed by severe winters.  With so few dead trees left standing nowadays, he saw no comeback for them, so installed about 50 nesting boxes and took care of them until 1995 when he was in his 90s.  That’s when Marcia took over their care, starting with cleaning out the infestations of assorted predators, like snakes.  Since then, she’s quadrupled the number of boxes at the facility.

Nest-Boxing 101
Not just any nesting box will work to attract the nesting pairs, keep them safe from predators, and help them fledge, so Marcia has them made to her specifications by Coveside in Maine, with the resulting product far better than the many others she’s tried and built over 20 years. She installs them at least 6 feet high with a baffle on a large smooth metal pipe to keep out raccoons and snakes, and is always dreaming about still more improvements to foil predators, including human ones. For them, the solution is using screws to open and close the boxes, rather than easier-to-use hooks.  (Teens looking for mischief rarely have a power drill hanging from their tool belt, like Marcia does.)

Nesting boxes fail in so many ways, Marcia’s developed a list of her pet peeves about them: they’re installed facing open fields rather than trees, with no effective predator guard, and they’re too small.  (Hotter summers mean larger boxes are needed  to dissipate heat.  A larger box also results in cleaner nests, more uniform feeding, and more room to stretch for the babies to exercise their flight muscles. The result is a healthier fledgling more likely to survive the first 24 hours after leaving the nest – the most dangerous period of their lives.  Tree swallows also need a larger box because of their longer wingspans dirtier nests.)

Then there are the folks who install boxes and do no monitoring of them.

Once they’re up, boxes need maintenance.  There’s the cleaning at the beginning and end of each year.  Then during the entire nesting season monitors like Marcia are busy doing this long list of tasks.   She’s careful to open each box from the top and count eggs and hatchlings, then record the data on her smart phone.  Nesting season here in Maryland runs from Mid-March to the end of August, with April- June the “holy crap” period, as she puts it.  Bluebirds nest two-three times per season, and thanks to climate change, start around April 7, two weeks earlier than when Marcia started monitoring two decades ago.

The baby birds in this nest are just 8 days old. Turns out the parents can’t tell that their babies have been handled by a human because they have no sense of smell.  Still, I had to promise Marcia I’d tell readers that she only handles them as necessary and doesn’t recommend anyone else do it. 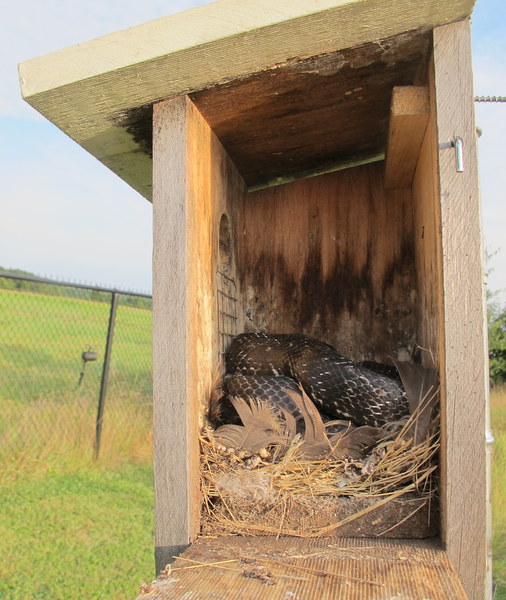 When she isn’t helping nesting birds come into the world, Marcia’s an ardent wildlife gardener (you saw her garden here) and oh yeah, a nurse.  She’s been nest-boxing for so long I shouldn’t be surprised by her ability to recognize and interpret the flight patterns and sounds of birds, like a bluebird distress cry we heard, indicating the presence of a nearby hawk nearby.  “Oh, that’s bad.” Yet when she discovered a fat, well fed snake in one of the boxes, she didn’t curse like I most definitely would have, but just went about the business of dealing with it.

So how DO you deal with a snake-in-the-box, a black rat snake that sources tell us is as long as 71 inches and when handled, often strikes and bites? Marcia poked it with a tool to try to get it to leave the box, which caused him to rear up, hiss, rattle and shake its long, creepy tongue at us to appear as threatening as possible, which sure worked on me.  (I’m still creeped out a week later.)  He wasn’t about to leave, so Plan B was to remove the box, stick a piece of duct tape over the opening, fling it in the back of the Ranger and head to somewhere far enough that it can’t crawl back before releasing it.  No, she won’t kill them, though many nest-boxers install snake guards that trap them, leaving them to starve to death. 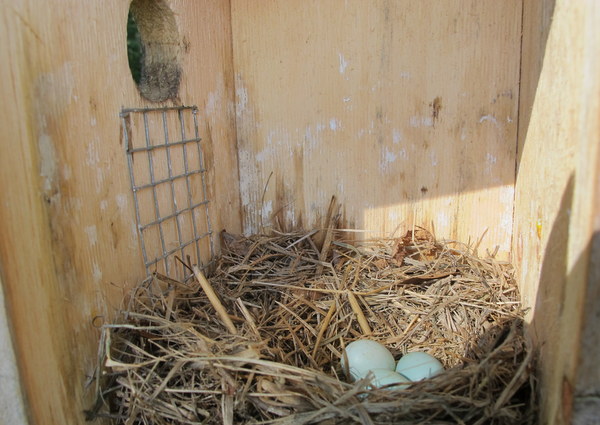 Fledglings need the wire screen to climb out.

Learn More, Join the Nest-Boxers
Marcia recommends nest-boxing, or “growing birds” as “THE way to start to get humans interested in environmental causes. When they have a hand in raising a wild creature and they see their needs for survival, everything changes for them.  And children grow up to be stewards of the land when they see that they ‘created’ a bird by offering it a home it wouldn’t have had otherwise. For me, wildlife gardening and love for open space came from my monitoring of insectivores.”

Marcia recommends one place on the web for information and networking with other nest-boxers – Sialis.org.  She’s gotten to know nest-boxers of all political stripes and through their common concern for birds, been able to talk with them about habitat needs and other environmental issues.