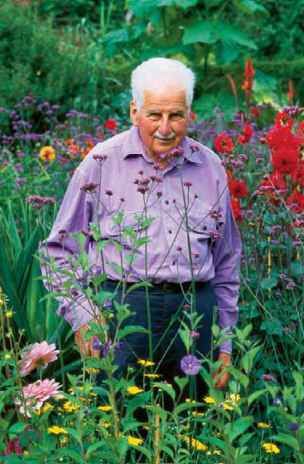 For the past couple years, I’ve been fighting a feeling that I’m being left behind by the gardening world as part of a forgotten minority. The hottest trends have passed me by. I don’t grow food, I don’t raise chickens, I hide my compost bin, and I’ve never had a rain barrel.  Don’t think there’s a powerful movement afoot? Here’s the opening line of Dominique Browning’s review of gardening books in the Sunday New York Times: “The garden book jury has returned a verdict. You are either growing vegetables or you have become one.”

I wonder what the late Christopher Lloyd would have thought of it all. It was his books and those of British garden writers like him that seduced me into gardening. Even though England’s gentle maritime climate ensures results I can never dream of in Western New York state, I still pore over favorites like The Well-Tempered Garden, and Christopher Lloyd’s Garden Flowers. In many ways, Lloyd’s standards are completely unattainable—it would probably be much easier to become an urban farmer superhero than to achieve what Lloyd did on five acres in East Sussex. A chicken coop would be a snap to throw together compared to a yew topiary, a carefully maintained meadow, or even the exotic mix of hot colored flowers and extravagant foliage that used to be Lloyd’s rose garden. (I do have something like that—it’s known as the rose garden that I turned into a big hot mess.)

And yet. These are the aspirational books that I’d take over any prosaic how-to—regardless of actual results. I will always love and reread them because nobody writes about flowers or gardening like Lloyd. Here’s a taste:

On gardening’s disappointments:
“When a plant dies in your garden, how do you react? Do you reenact one of the historic tragic roles: Medea, Phaedra, Werther, Macbeth? Do you lash out? Or do you, with a glazed, all-passion-spent-expression, merely comment that plants invariably die on you, and that you only have to look at one for it to wilt forthwith?”
(The Well-Tempered Garden)

On plants he does like:
“The rest of one’s life is a love affair with lilies, but, as is the way with such affairs, constantly fraught with frustration and disappointment. It has been said, with a wry element of truth, that the bond between turkeys and lilies is that their sole ambition in life is to die.”
(Christopher Lloyd’s Garden Flowers)

On the necessity of changing it up:
“Never let your gardening become stereotyped and never take a plant or group of plants in your garden for granted. Even shrubs should be put through the hoop at regular intervals, and with annuals it a crime to grow the same kinds in the same place year after year … ”
(The Well-Tempered Garden)

Lloyd grew vegetables too, of course. And there are many more books, including two that came out after his death in 2006. I keep them handy at all times, to bring out whenever I need a reminder of why I started gardening in the first place.