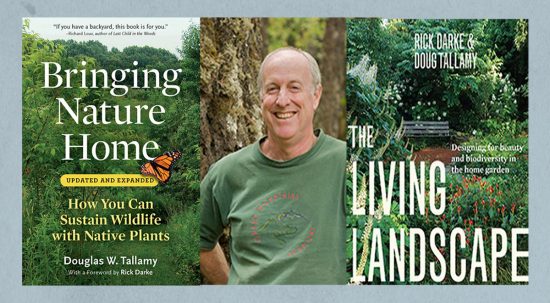 I am not a purist and I don’t expect many other people will be either. I think taking the hard line and insisting on all natives will go a long way toward killing the movement.
—Doug Tallamy, Garden Rant interview, 12/12/07

Mild-mannered Doug Tallamy, author of Bringing Nature Home, is still smiling but he’s also a bit exasperated at the backlash he’s noticing against native plant advocacy, the latest example of which was found in a New York Times op-ed entitled Mother Nature’s Melting Pot.   If you don’t care to waste your NYTimes free article-reading ration (and we did just link to this a few days back), basically the op-ed—written by anthropologist Hugh Raffles—compares negative feelings toward alien plants to xenophobia, and praises non-natives eucalyptus and ice plant for their abilities to feed bees and deter erosion. The op-ed generated several letters of protest in the Times and dozens of passionate comments when it was posted here.

I caught up with Tallamy last Thursday before his presentation on the importance of growing native plants at the Buffalo and Erie County Botanical Gardens. He gave the Times piece short shrift. Like many of those who commented here, he notes that the writer has no scientific credentials in this area, and maintains that an emotional argument about plants being persecuted or tolerated has nothing to do with maintaining the food web and, with it, biodiversity. He also referred me to a long response to the Times op-ed  published by a colleague of his, conservationist John Peter Thompson. (I couldn’t even begin to summarize it.)

Tallamy takes another pro-alien argument a bit more seriously. In March, Susan linked to Penn State biologist Tomas Carlo’s study positing (to briefly summarize) that an abundance of Japanese honeysuckle in Pennsylvania helps sustain bird populations, and that removing the honeysuckle would disrupt this newly developed relationship and thus do more harm than good.

Tallamy’s response: “That’s like saying if I drive down I 95 and stop at a rest center and there’s a whole bunch of starlings feeding at the garbage can, than I 95 must be good for birds. We know that birds eat honeysuckle berries. This is not news. By the way, the birds [in the study] were catbirds and robins. All the neotropical birds who eat insects disappear when you’ve got a world full of honeysuckles.

“Berries do not provide food when the birds are rearing their young. And then they took blooming nightshade in pots and put it in the middle of the honeysuckle to show that it would help disperse native berries. But [in actuality] no native berry-producers would survive in an area overrun with lonicera japonica. So the logic just doesn’t work.

“We should not hate plants just because they’re good at capitalizing on disturbance. It’s not black and white. I’m all for compromise. There used to be complex communities of native plants here supporting wonderfully diverse realms of life. Look out that window and count the number of animals you see. [Referring to huge front lawn of the botanical gardens] You see a vast lawn and nothing—maybe a blackbird or a robin. And we are so used to seeing nothing we think that’s normal. The reason they’re gone is because the food web that supported them is gone. Yes, grass is better than dirt, but better for what?

“Most people garden in a very small percentage of their yard and the rest is barren. Have your hobbies, grow what you want, but also put in some of the trees that used to be there to support the birds that you probably still do like. … I’d like to keep the discussion scientific and keep the emotion out of it. Just don’t tell me that these choices have no consequences and that any plant is as good as any other plant.”

Tallamy hopes to publish a second book that will provide a more comprehensive answer to the “how” question of gardeners adding more native plants—particularly in the lawn-dominated neighborhoods that continue to be the focus of his concern.

My take? Just as it did the first time I talked to this scientist, the idea of using as many natives trees and shrubs as possible appeals to me. But then, stuck as I am with 3 Norway maples, just about any other tree plan would sound pretty good.

The good news for Doug Tallamy is that—though clearly there is a backlash against the native plant movement—for the most part, the audiences he is reaching on his tour seem unaware of it. And  I continually meet experienced gardeners who have just discovered his book and tell me that it has forever changed the choices they make and the advice they give.