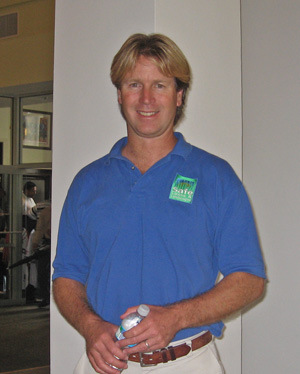 It seemed that everywhere I looked there were press releases promoting the kick-off event for an organic lawn organization – on the Mall in Washington!  You know, just like the Million Man March and countless other events that made history.  Trouble is, the Mall’s a pretty big place, so as I rode the subway downtown I was wondering if I’d ever find the event.  And sure enough, it took some sleuthing but I finally spied a likely group on the Capitol grounds — note, not the Mall — but by then I was pretty cranky and not at all eager to shill for an organization that looked suspiciously like a book promotion tool for a well known TV personality – the Blond One himself, Paul Tukey.

So you see my frame of mind – annoyance mixed with ’60-style skepticism.  But when faced with SafeLawns.org, the coalition of lefty nonprofits and others whose mission is organic lawn care, how could I NOT fall in line?  Speakers included, in addition to the TV-cute Tukey himself, folks from the Rachel Carson Council, the Chesapeake Bay Foundation, the National Botanic Gardens – see, all good guys. (Even Newman’s Own Organics is a partner – beyond TV cute to movie star dreamy.)

So here’s what they’re up to:  challenging universities and industries to eliminate the use of chemicals on their lawns, lobbying state legislatures to eliminate pesticides on school grounds, and encouraging realtors to create Safe Lawn certification programs for homes on the market.  That’s just for starters.

And here’s some scary shit I learned in their handouts:

The list goes miserably on and I’ll stop there because by now you’ve gotten the point.  But how about the extent of the problem?  More than half of the 104 million households with lawns use insecticides; 40 million use herbicides.  The New York Board of Pesticide Control found that 80% of homeowners don’t even read the Caution labels on pesticide products.  Then there’s a bunch of studies that show the effects of synthetic lawn care products on water, on air, and on soil itself (reducing microbial activity by 75 to 80%).

Had enough?  I think that’s the point.

I did have a nice chat with Safe Lawn’s executive director, Shep Ogden, another Boomer Boy of Gardening.  Actually it wasn’t so much a chat as him expounding passionately about genetically modified plants (against, big-time) and deviant forms of “scientism” while I tried to keep up, scribbling furiously and calling desperately on my meager grasp of botany to just get his point.  And I could try to summarize it for you but I’d rather corral him into making a guest appearance right here to speak for himself.  How about it, Shep?