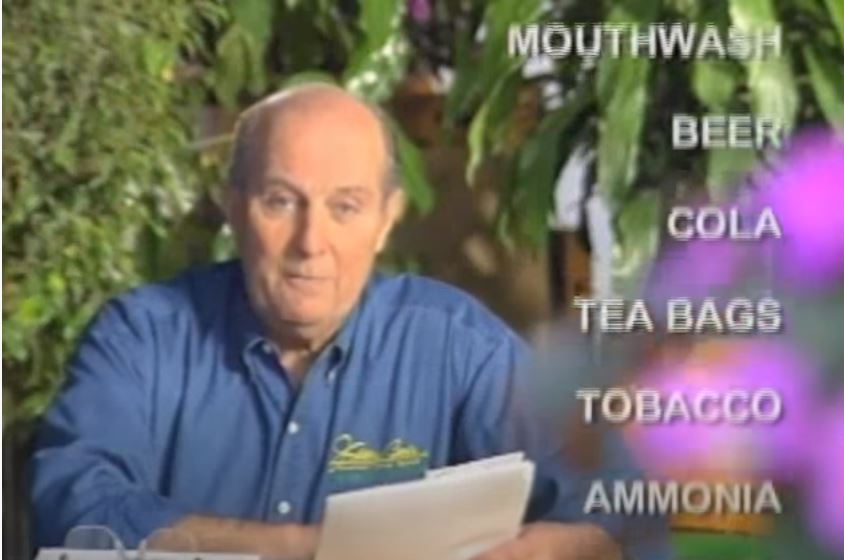 Well, the most amazing gardening shows are running all week on WETA, the local PBS affiliate – Jerry Baker’s how-to videos.  He not only calls himself “America’s Master Gardener,” he’s actually trademarked the term.  Takes cajones, don’t ya think?  Well, that’s just for starters.

His advice for a “spring clean-up” is to spray everything with a mixture of antiseptic  mouthwash, dish soap, the juice of chewing tobacco, and any “medication” that we think is needed.  And by “everything” he means lawn and all your “trees, shrubs and evergreens.”  He used that nonsensical term so often during his show on the subject, I almost forgot how  mistaken it is. This homemade formula is supposed to start our gardens out “clean, green and mean” and is to be followed by spraying everything with dormant hort oil, followed by a combination of “any old fertilizer” to which is added sugar and epsom salts.  This is not only to be sprayed on everything but also inserted into holes drilled around every tree.

After all these applications you’d think you’d be set for the season, right?  No, it’s just the beginning because Jerry next instructs us to spray with his “green-up tonic” every 3 weeks throughout the season and his “clean-up tonic” every 2 weeks.  Oh, and don’t forget the anti-dessicant spray in spring and fall.  Also in the fall we’re supposed to spray with his “jump start” formula of beer, dish soap, ammonia and epsom salts.  And you’re still not done. His recommended program for feeding and “cleaning,” by which he means killing insects, should be continued throughout the winter, even on top of snow.  And after pruning in late winter, the cuts should be sealed with latex paint.   As hard as it is to stop relating this parade of horrors, I think I’ve conveyed the essence of Jerry Baker, conveyer of “natural remedies and environmental products for your health,” according to his own promotions.

All of which sent me scrambling to Google to find out more about this guy and among the marketing sites for his products and his 40 books, I found this good article fleshing out my own concerns. There I learned that he’s been universally condemned by plant scientists, who say his advice “ranges from the wacky to the downright dangerous.”  For example, the nicotine in chewing tobacco juice is a lethal pesticide, far more dangerous than what most of us buy in the stores.  State and federal agricultural agents have objected to his use of the name “America’s Master Gardener” – well, I should hope so. 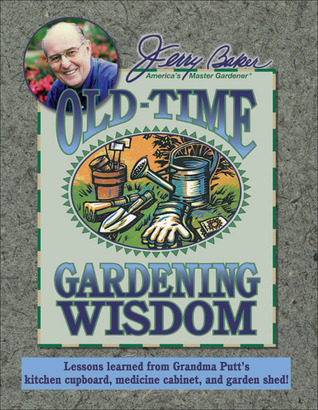 Apparently every scientific group there is has complained to PBS but trouble is, Jerry’s videos bring in PBS’s third largest haul of U.S. greenbacks.  So their VP of fund-raising says they “haven’t seen convincing evidence his advice is harmful” and that “most of the criticism has come from people with vested interests, who are the traditional experts.”  Wow, what a concept, that if you’re a “traditional expert,” presumably meaning one with a degree in the
field, you’re somehow suspect because you have a vested interest.  Reminds me of the attitude toward science exhibited these days by Republicans, but don’t get me started.

On to my questions.  First, why is this guy so popular? See, his 15-year-old national radio show airs on 217 stations, he’s been Kmart’s gardening spokesman for 27 years, and he’s considered one of America’s foremost gardening authorities.  Despite his folksiness, I’m surprised that his shows aren’t sending viewers running in terror from the overwhelming burden of continual spraying.  I thought the public was looking for low-maintenance advice, so you see why I’m confused.

But more importantly, if this guy were a medical quack, would he be allowed on, much less promoted by, public television? Hell, no.  But I suppose nobody takes gardening seriously enough to dare suggest a little proof and heck, it’s only the environment at stake, anyway.  Bottom line, why hasn’t this guy been totally
discredited and run off PBS long ago?  Apparently only a couple of stations have been persuaded to drop Jerry’s programming; is that because gardeners, even master gardeners, are happily zoned out in their gardens?  Guys, it doesn’t have to be that way, especially now that gardeners and environmentalists are often one and the same.

If I’ve failed miserably and you’re not pissed off about all this, here’s my last shot. One of the pro-Jerry sites I found has the heading, “Get the latest scoop straight from the bloggers,” followed by a listing of various commercial sites with not a blogger in the bunch.  But you see how bloggers are being cited as legitimate grassroots voices?  Now that’s a challenge I can’t let pass, despite my long support for public television.  Sorry, guys.