A “Brutal” Bonsai Story Gets Curiouser and Curiouser 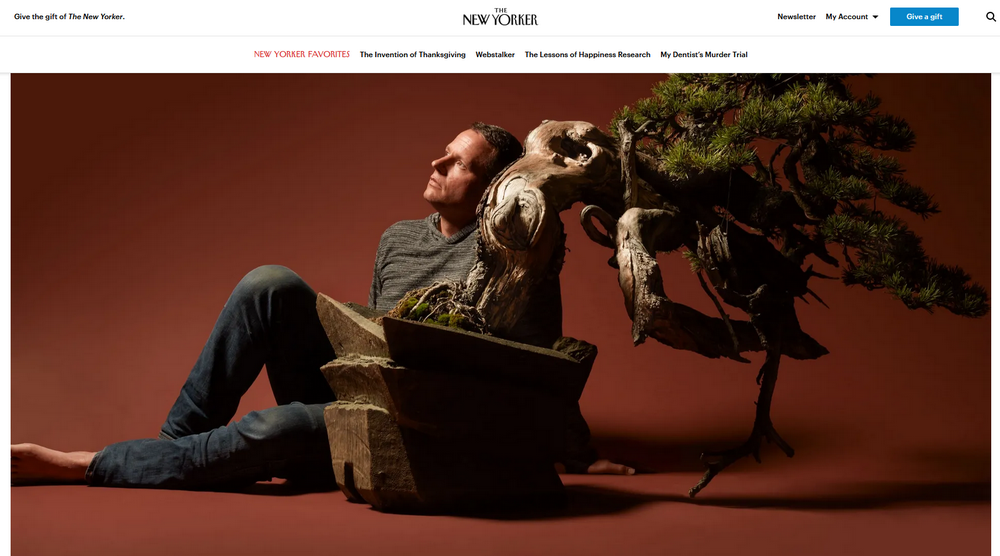 I’m here to recommend a fascinating article about bonsai in the New Yorker – “The Beautiful, Brutal World of Bonsai” – featuring an American who undergoes a “brutal” six-year apprenticeship to a Japanese bonsai master, and his life and work back in the U.S.

The apprentice is Ryan Neil, pictured above in a glamour shot with one of his creations. Meet Ryan and see some of his works in his video (and on his website).

I was most intrigued by two facets of this story:

Obsession and a Tolerance for Brutality

Who signs up for years (up to ten, he was told) of menial work, extremely long hours, plus disrespectful even physically abusive treatment by the teacher? I’m always fascinated by the sometimes sudden passion that people experience for something new, but this case seems extreme. He endured so much and sacrificed a normal life for the art of bonsai.

Ryan was first turned on to bonsai from seeing it portrayed in Karate Kid movies and began creating his own works at the age of 14. (In the article his father is quoted as saying “He was possessed.”) He studied horticulture at Cal Poly but also studied Japanese there because he’d heard about a Japanese bonsai master he hoped to learn from. This, despite being warned that Masahiko Kimura, the bonsai master he was determined to apprentice for, was “harsh, uncouth, even cruel.”

I can’t wrap my head around that at all. 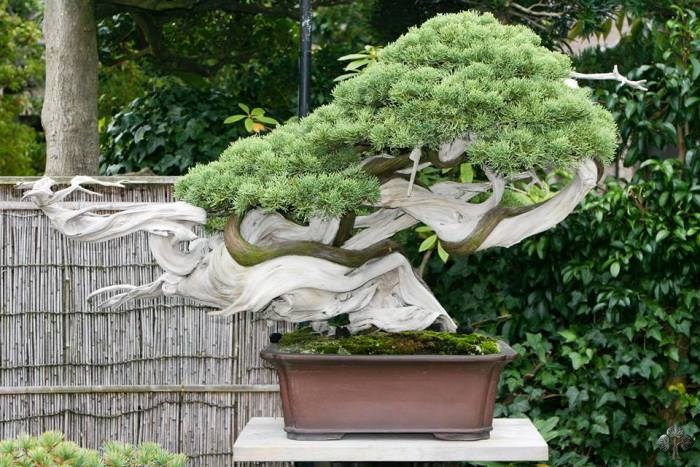 One of Kimura’s bonsai creations

And we learn that Kimura used power tools!

Kimura is sometimes said to have done for bonsai what Picasso did for painting—he shattered the art form and then reëngineered it. Using power tools, he performed transformations so drastic that the resulting shapes seemed almost impossible. Moreover, his new methods allowed him to execute dramatic alterations in hours as opposed to over decades. Not surprisingly, his accelerated technique was admired and imitated throughout the West. 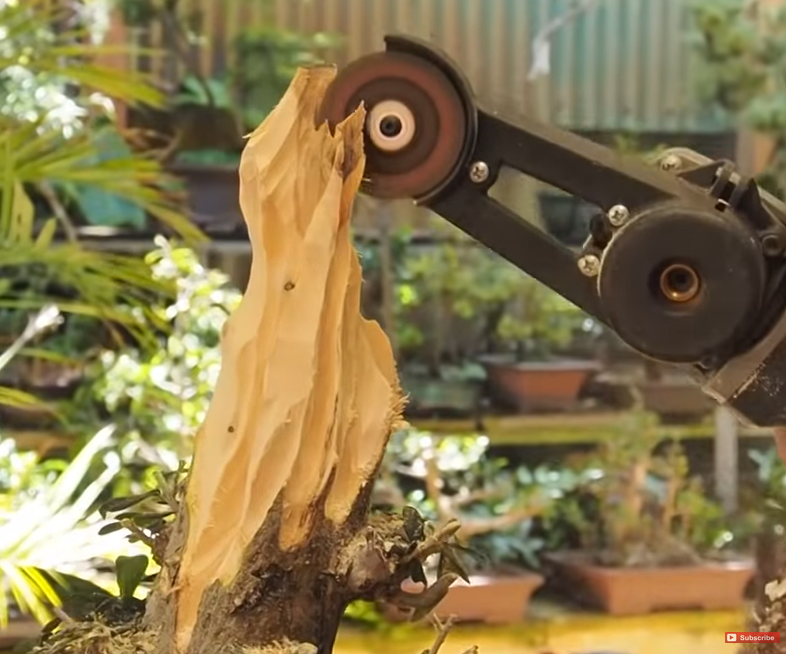 Here’s an image from a video demonstrating the use of power tools to create bonsai.  Something else I can’t wrap my head around.

Although I see from this video of Kimura’s own creations that his results were indeed impressive.

Power tools and brutality aren’t the only fascinating details I learned about Kimura from the article. For American readers, even avid gardeners like me, it’s hard to imagine the celebrity and wealth he enjoyed there as a bonsai artist.

As Kimura’s wealth grew, he adopted a Hemingwayesque life style. He drove American muscle cars and learned to pilot speedboats. He collected videos of Mike Tyson boxing matches. He hunted wild boar in Spain with the Spanish Prime Minister.

Okay, now his use of power tools is looking less surprising.

After finishing his apprenticeship in Japan, Ryan Neil moved to Portland, Oregon where he started a business called Bonsai Mirai for teaching “bonsai creators,” curating bonsai artistry and of course creating bonsai works for customers. 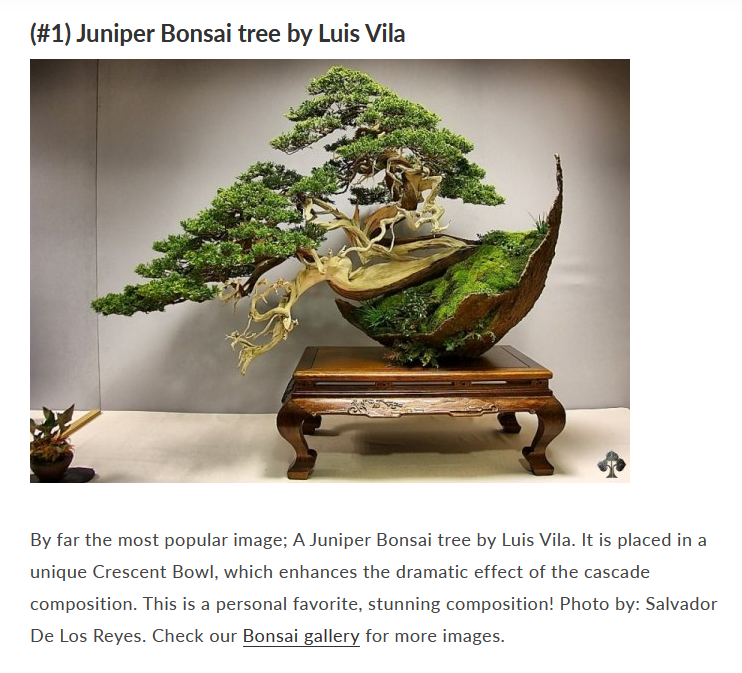 One way that Neil “curates bonsai artistry” is by collecting photos of great works on his website.  Above, the “most popular bonsai” image in his collection. 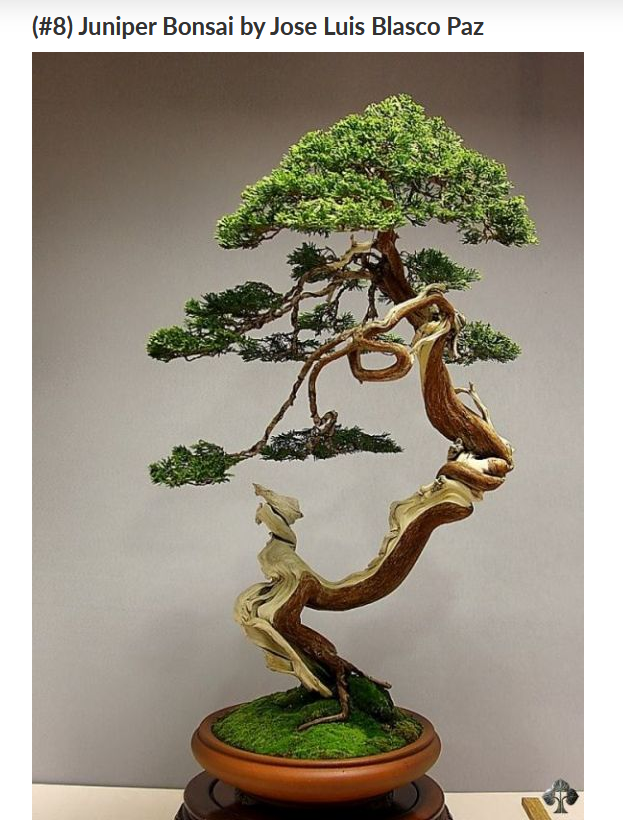 Another one of the most popular bonsais. 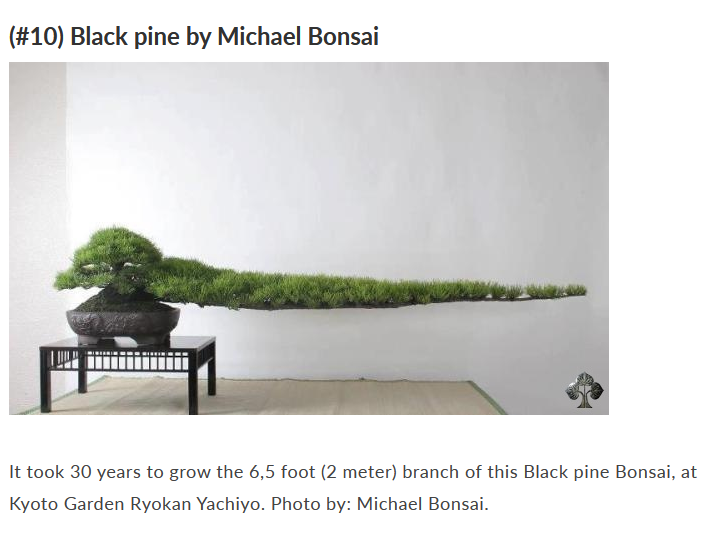 Above, one of the “crazy and unusual bonsais in his gallery.

Neil live-streams a bonsai-shaping demonstration every week (it’s on my calendar!) and he’s also a blogger.

Neil pointedly avoids power tools; he never grinds or sandblasts. in addition to in-person classes, he has launched an online tutorial service, which has thousands of subscribers. He is also developing an app that dispenses personalized advice.  It sends little reminders when it’s time to repot or trim a tree.

Despite Neil’s multiple streams of potential income, he’s quoted as saying his finances are “hand to mouth.” But no worries! His apprenticeship with Kimura prepared him for that, giving him “an honest glimpse of what it means to be a bonsai professional—and it had hardened him enough to handle that life.”

So Have I Suffered for MY Gardening Passion?

Certainly not from brutal treatment by anyone! Also gardening hasn’t ended any of my marriages or threatened my financial stability.

The only suffering my life-long passion for gardening has ever caused me? Bees! Swarms of them! And the occasional cut from pruning too damn fast.

So much pleasure for so little pain! I’m very grateful.