Something funny is going on here. Mum’s the Word. 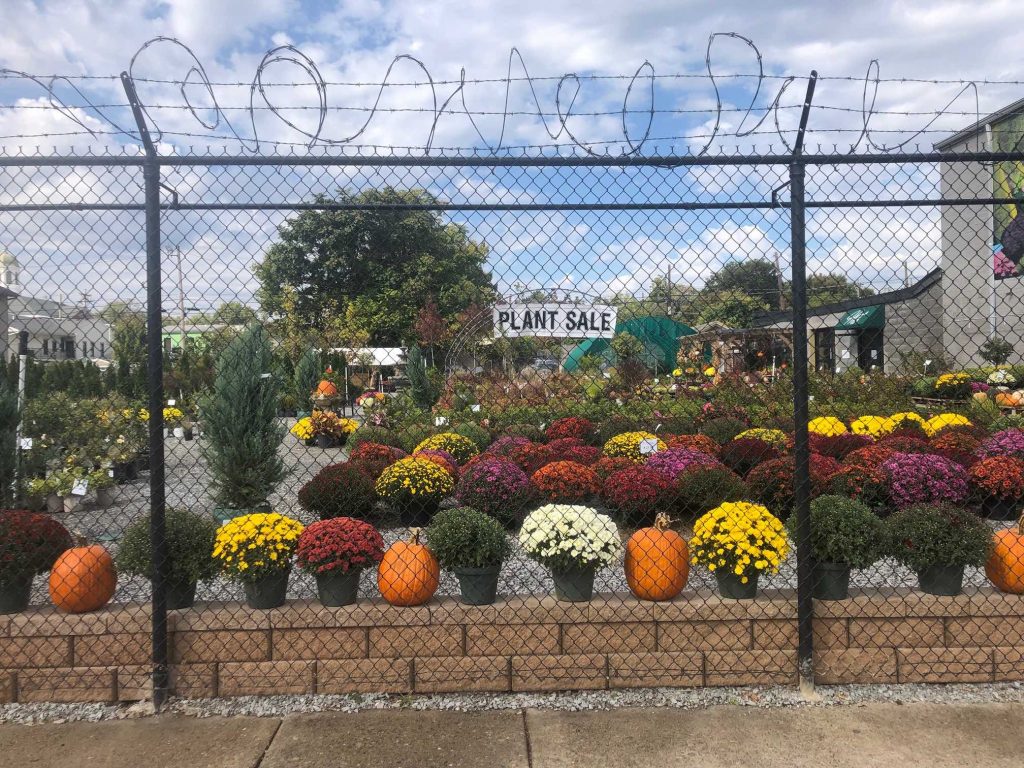 Primped mums staged next to a rack of antifreeze may seem, to many of you, as appealing as convenient store rotisserie hot dogs, but what’s not to like about nameless mums?

I ignored potted mums for years, but I now love throwaway fall flecks of color. I associate these “McMums” with doorstep pumpkins, warty gourds, Candy Corn, the red and yellow fall foliage of maples, and one very special Gingko. This is the Halloween stage for trick or treaters and the winddown of another growing season. 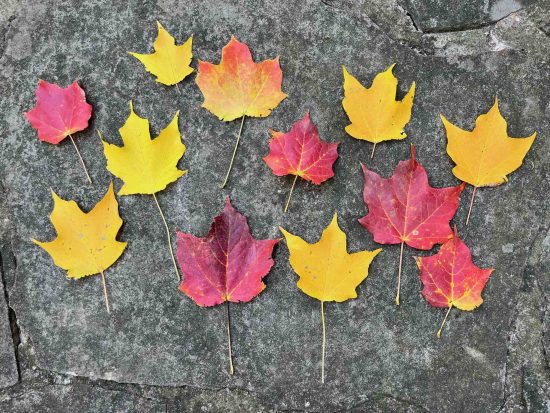 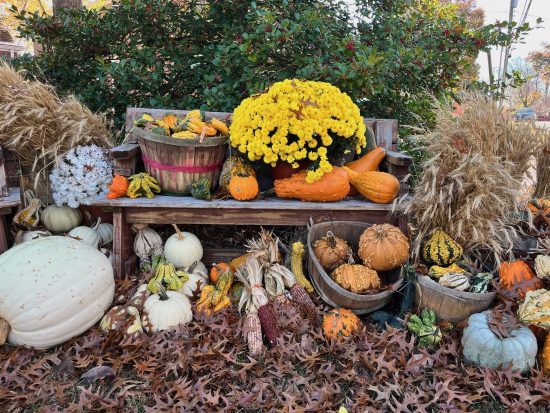 There’s no reason, of course, why you can’t plant potted mums in your garden, and take your chances they’ll come back next year, but you have an odds-on better chance for longevity with perennial fall mums.

A hardy Korean mum began flowering the third week of October in Salvisa. Hadn’t I grown this before? I emailed Paul Cappiello, CEO at Yew Dell Botanical Gardens in Crestwood, Kentucky, and he responded, “I have received what looks to me to be the identical plant under the following names: ‘Hillside Sheffield Pink,’ ‘Sheffield Single,’ ‘Korean Apricot,’ ‘Korean Single,’ and ‘Pink Bomb.’ I’d bet dollars to donuts that they are all identical.”

The Royal Horticultural Society lists ‘Sheffield’ but says the name is “unresolved.”  Fred and Mary Ann McGourty found a plant growing in Sheffield, Massachusetts, in the 1980s or early 90s, and brought it back to their Hillside Gardens in Norfolk, Connecticut. Their reintroduction went out into the world with a new name. There is a probability that the original Sheffield, Massachusetts, hardy mum originated somewhere else under a different name, but no one seems to know the provenance, or who first selected it. I offered ‘Sheffield’ in my 1994 Holbrook Farm catalog. 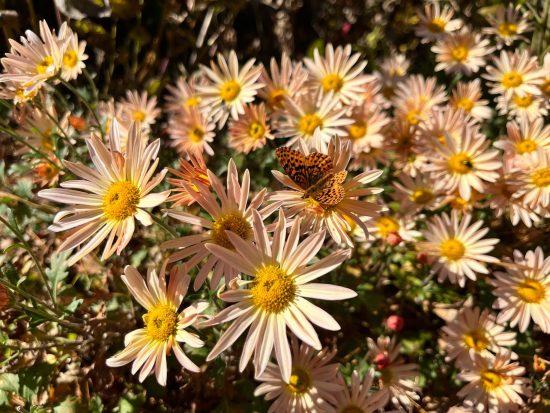 I asked gardener, author and photographer, Pam Harper of Seaford, Virginia, to sort out the confusion. “I wish I knew the answer. I can only tell you that the McGourtys called it ‘Sheffield’, and later from Nancy Goodwin’s Montrose Nursery in Hillsborough, North Carolina, there was the introduction of ‘Pink Sheffield.’ About the same time, I had the apricot colored one, simply named ‘Apricot.’” 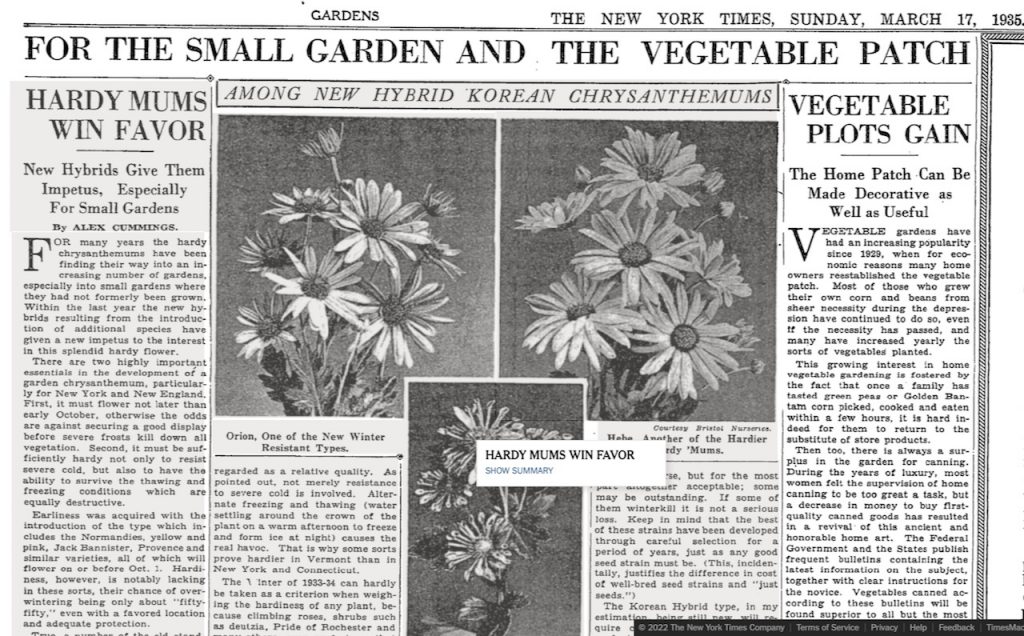 Philanthropist Mary Lasker sponsored World War II memorial gardens around the country, planted with thousands of new Korean-hybrid chrysanthemums. (Mrs. Lasker also contributed funding for the planting of a million daffodils along Washington’s parkways.) The Conservatory Garden in Central Park in New York City was one of the early beneficiaries of Mrs. Lasker’s generosity. Lynden Miller, artist, horticulturist and urban landscape designer, emailed and said, “Many years later in the late 1980s, she contributed $10,000 each year to enable staff and volunteers to plant a mixture of 2,000 Korean-hybrid chrysanthemums in June. They are removed so the volunteers and staff can plant spring bulbs before Thanksgiving. Contract-grown, Korean-hybrid cuttings are replanted in June after the 20,000 bulbs come out.” 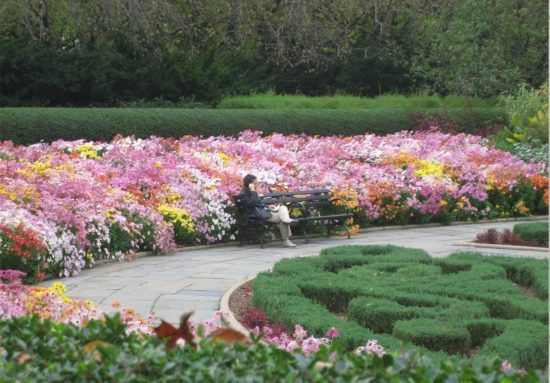 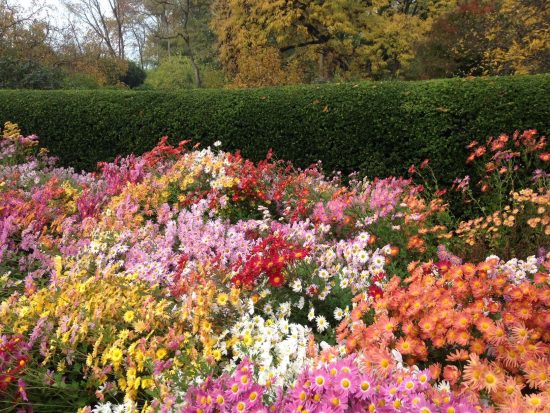 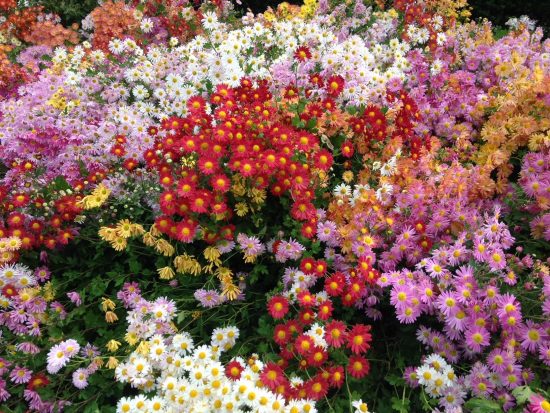 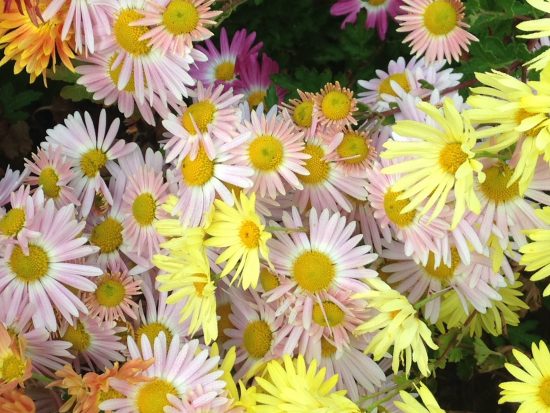 The six-acre secret garden began deteriorating in the 1950s and was derelict by the 1970s. Lynden Miller led a remarkable transformation of the run-down formal Conservatory Garden in the 1980s. I have many favorite public gardens, but the Conservatory Garden remains at the top of my list.

Pam Harper has grown many chrysanthemums and has a few favorites. “I do love chrysanthemums and it is a pity that nurseries offer only the globular dwarfs that seldom endure. My long-time favorites are the button mums ‘Mei-Kyo,’ ‘Bronze Elegance,’ and ‘Nantyderry Sunshine’—which look good all year, don’t attract critters, and are drought tolerant. I’ve long searched for a white one, I know there is one in England, but so far have failed to find it. I adore ‘Gethsemane Moonlight,’ but it does need pruning back a couple of times.” 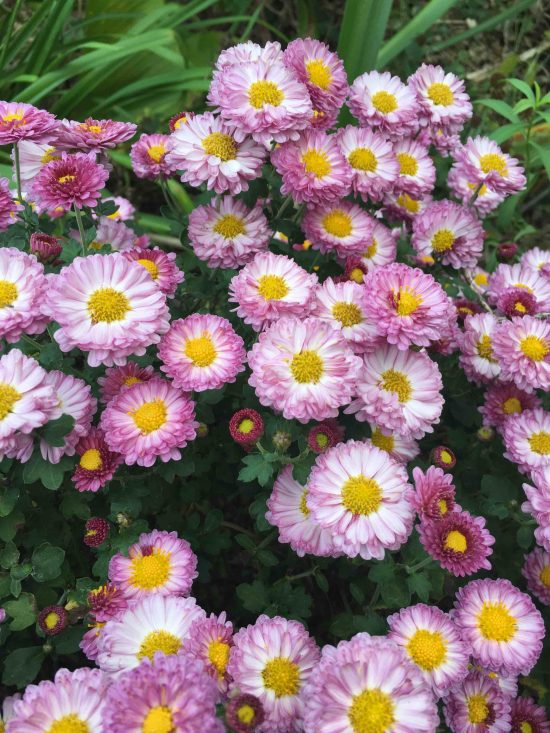 Richard Weber, landscape architect and owner of Springhouse Gardens, in Nicholasville, Kentucky, planted ‘Sheffield Pink’ in a client’s garden 10 or 15 years ago. The hardy mum is thriving, and for years has been throwing off occasional, interesting new growth with different colored blooms. Botanic freaks. These are identical genetically but have differing colors in shades of yellow, pink, white and red. ‘Springhouse Red,’ covered with bees and butterflies a week ago, is sold in Weber’s beautiful garden center and is making the rounds in the region. 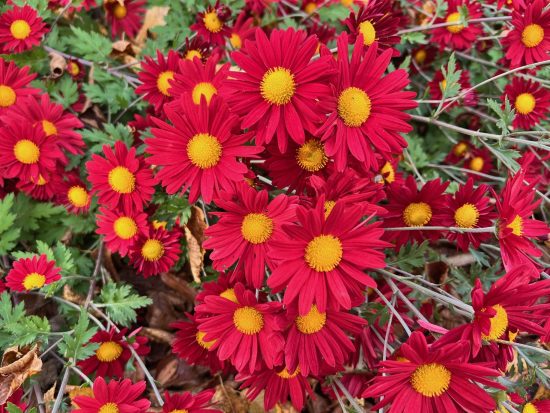 But what’s causing these haywire color breaks? I called nurseryman, propagator and breeder Bill Barnes, the psychic descendant of Gregor Mendel. Few possess his scientific curiosity. He told me the color breaks are epigenetic changes attributable to “jumping genes.” “‘Sheffield’ can spontaneously change flower color, as can ‘Venus,’ due to non-specific environmental triggers which have yet to be identified. By the way, some pines switch from male to female and back again every year, male this year, female next year. The sex change is also epigenetic and not due to a mutation.” 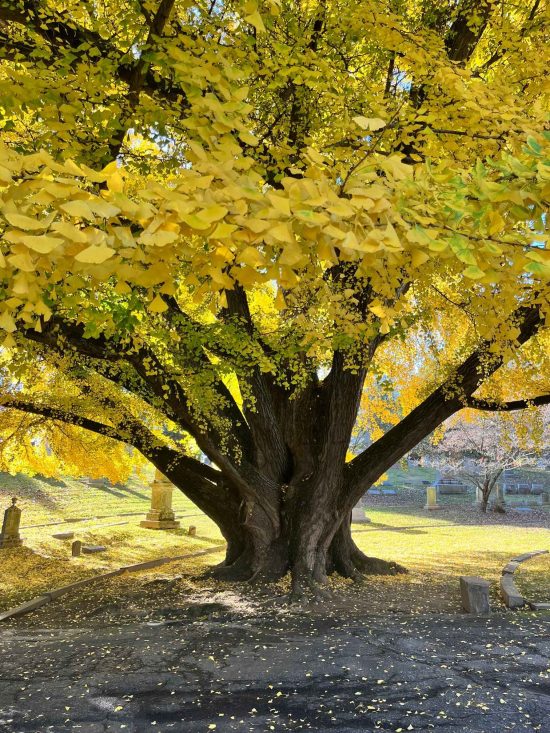 There is a fascinating Witches’ Broom in this huge and spectacular Gingko at Cave Hill Cemetery in Louisville. A Witches’ Broom is caused by a peculiar, and not fully understood, epigenetic gene expression that goes haywire in trees and occasionally in shrubs and perennials. A switch on a gene, ordinarily turned off, is turned on. Or vice versa. The DNA is the same as that of the parent, but an abnormal growth occurs on a portion of the plant due either to a fungus, bacteria, virus, stress hormones or possibly mitochondrial mischief. The male tree was barren and produced no seeds. The tree, planted in the mid 19th century, suddenly produced a peculiar, stubby growth, high in its branches, late in the 20th century. And guess what: The Witches’ Broom was a seed-producing female. The once male Gingko is now a gender-bending, street-legal hermaphrodite.

There is one straggler, hardy mum with a long passalong history. If conditions don’t turn too cold, or snowy, the Thanksgiving mum might still be showing color into early December. There have been no known epigenetic sex changes.

My Salvisa neighbor, Charlotte Fallis, gave me this passalong hardy garden mum two years ago that had been growing on her family’s farm in nearby Bondville for many years. She called it the Thanksgiving mum.

I corresponded last year with Andrea Sprott, Garden Curator of the Elizabeth Lawrence House and Garden, in Charlotte, about old, hardy mums. I described the one gifted to me. She was, coincidentally, writing a story for the Southern Garden History Society that included this Thanksgiving mum. (There are other so-called Thanksgiving mums.) Andrea said Miss Lawrence called it ‘Ridgewood Yellow’ or ‘Clarkson Yellow.’ She received hers from Elizabeth Clarkson. “There’s no clue where Mrs. Clarkson first received this mum, or what the original name might have been, but it has been flowering in her Wing Haven Garden for at least the last 75 years, and is still flourishing in the Elizabeth Lawrence Garden, also.” 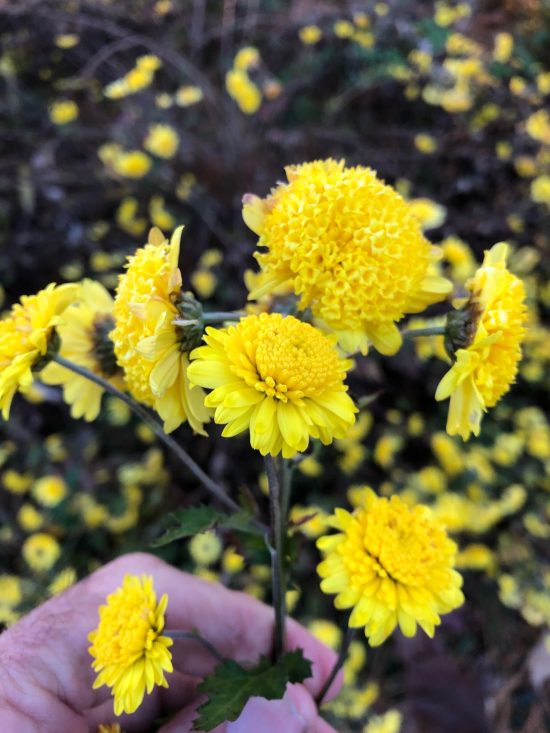 The Thanksgiving mum is my last, bright bloom of the season amidst dominant outdoor shades of brown and gray. The mum withstands temperatures in the low–mid 20s.

What’s the takeaway on hardy mums?

Don’t get hung up on cultivar names and don’t worry about “jumping genes.” They don’t bite. Be generous with your favorite plants. Pass along garden goodness. Spread joy, plant a few clues. Someone in the next generation, 50 years from now, may stand before Chrysanthemum ‘Sheffield’ or the Thanksgiving mum and wonder where in the world these hardy mums came from.