Dry and Colorful – A Letter from the Midwest

Thanks for your most recent letter.  I apologize for the lateness of this one but it’s been the most amazing Fall I can remember. Long, slow, mild, and beautiful. The foliage and the late bloom continues even now despite this late date and an epic drought. We’ve had no appreciable rain at my house since maybe early in September until last week. Even then, we only got ½ an inch. Actually, it’s been so dry around the entire Midwest that the Mississippi is so low they cannot run barge traffic. Rumors have been swirling that most of the things needed to make Big Gulps are transported by barge and there’s going to be a shortage. The whole region is in a panic.

But this lovely weather has helped some with that and it has compelled me outside almost all the time. What’s been odd about that for me is, once outside, I’m finding I have little to do. I half-heartedly dragged hoses until I finally gave up. Usually, I don’t water much after Labor Day, but I planted some new things and therefore felt obliged to provide life support. Lately, I’ve been blowing some leaves around just to feel useful but mostly I’m working really hard to just be in the garden without actually doing any work. It’s been a nice change from my usual running around trying to wrap up multiple projects like a madman. Of course, inside, I’ve been ramping up four or five new projects so it sort of levels out. I’ll always find a way to run around like a madman. 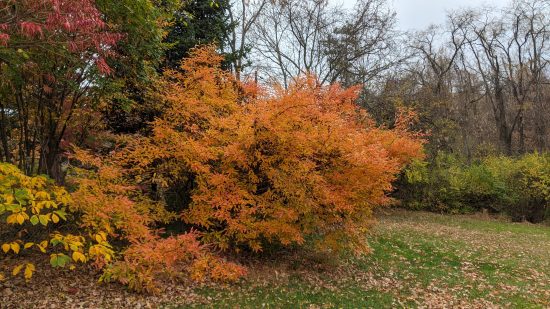 A Lindera angustifolia I planted on my neighbor’s side of the fence has seen no rain or irrigation in months and still looks great. 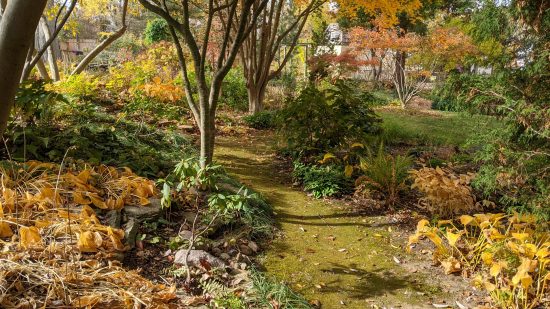 Even through the drought, my beloved moss paths have done okay. I’ve watered them as much as anything else. Interestingly, the hellebores, normally so tough and easy, have more recently given up hope and are resting their chins on the ground.

But around here every Fall is predictably dry and every year I hear new gardeners asking if this will ruin the fall color display. And every year I hear experts answer that it could, but then it never does. Unless a Fall drought is so bad it kills trees outright, those of us who’ve been around the block a few times know that Fall color pretty much shows up every year no matter what. My guess is that it is determined by every other aspect of weather except for rain. Day temps, night temps, wind, storms, day length; in my opinion, these are the factors. No science here. Just observation. I could look it up but I’d rather just opine. All I know is, apart from a few light frosts and one harder one, it’s been warm, sunny, beautiful, and kind of eerie to be out amongst it all without much to do. 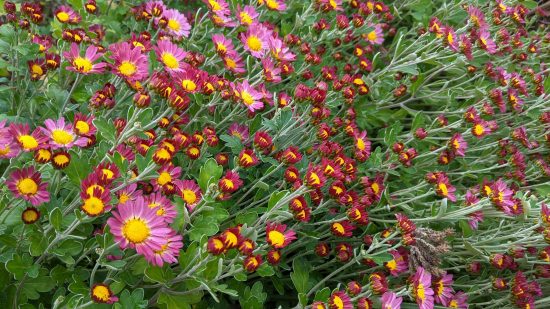 Chrysanthemum ‘Will’s Wonderful’ is a true perennial. It waited until November 1st to open its first bloom. Pollinator magnet.

The upside, I guess, of getting older is gaining a little confidence that the sky is never falling. Of course, I’ve probably just gotten lazy and allowed myself to fall into a state of complacency. If so, I’m fine with it. Anymore, if something bad is going to happen, I’d just as soon it comes out of the blue. Just being able to say you knew something bad would happen before it does doesn’t make it any better. There’s a reason they say ignorance is bliss, I guess. 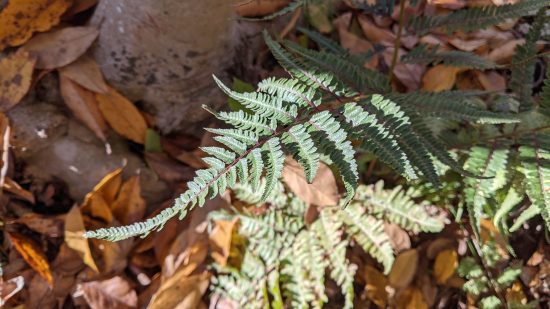 A few of the ferns are looking exceptionally nice despite the drought. This is one of the Athyrium niponicum pictum cultivars or hybrids, I think.

The other upside of getting older is that the garden is getting older too. And although I’m not improving with age, the garden is. Things like those little Japanese maples I planted as one-gallon plants are now past the “promising” stage and have started to “deliver.” And I’ve had time to rid the garden of so many bad design ideas and replace them with less bad design ideas. So a garden that at one time was jam packed with three times more plants than needed, most of which I bought not knowing what they would look like nor how they would perform, now looks kind of respectable. It’s amazing what ripping out the dregs does for the rest. 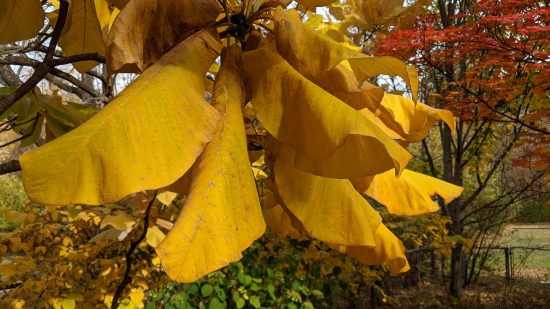 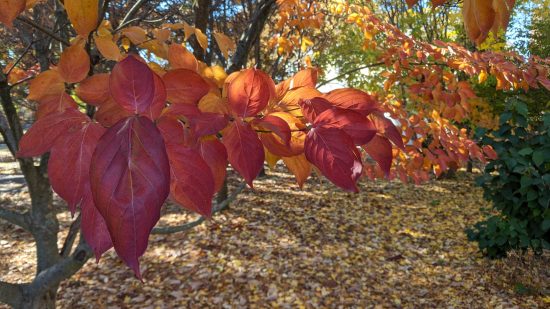 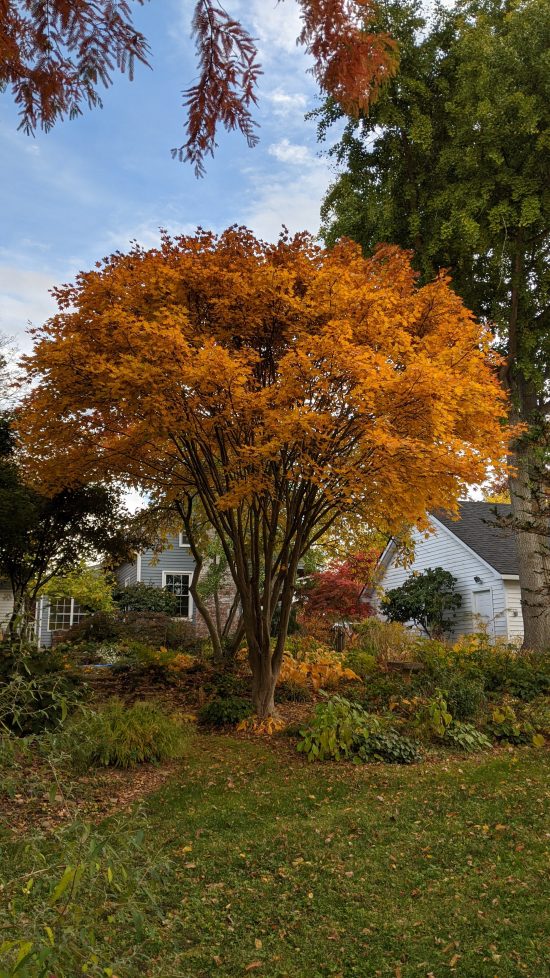 Thus, years and years of collecting has steadily been undone by an almost equal number of years de-collecting. It was hard at first, got easier over time, and now I remove an ugly plant with a strange grin on my face. It’s a god-like power I wield maniacally. As ugly as that sounds, artistically, it has mostly worked. I’m not saying I have a great garden. I know it has flaws, but, overall, I kind of like it. Beauty is always in the eye of the beholder, and I’m this garden’s most frequent beholder, and I at least like it now more than I did. 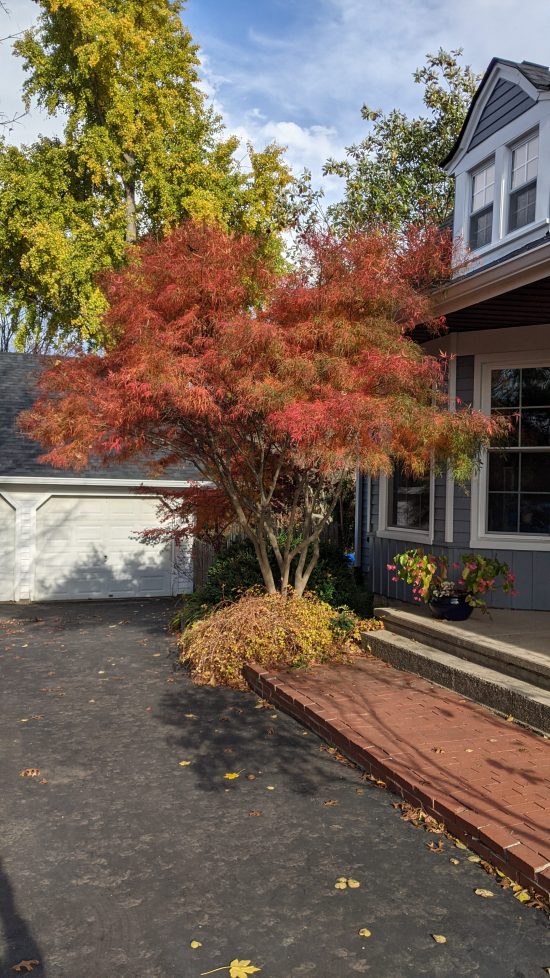 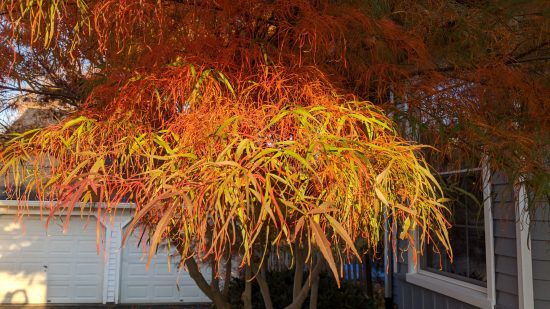 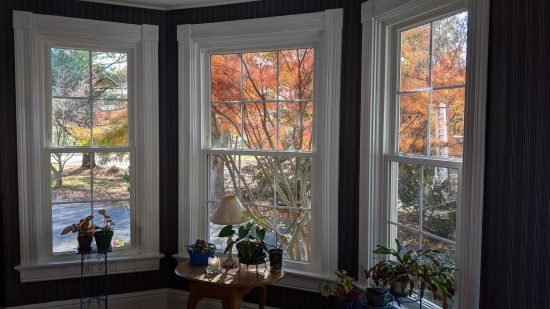 Another favorite from the collecting phase, Ace palmatum ‘Koto No Ito,’ planted in 2006 as a one-gallon plant. Love viewing it from our living room window. (All three photos)

In your last letter, I laughed as you mockingly laid out the perfect formula for a successful Instagram post. Basically, it is: “I am [some exciting verb combo] with [some amazing person] at [some amazing place]. Razor sharp observational skills and a brilliant piece of writing. Well done satire on the rampant self-aggrandizing by way of name-dropping that is the smaller percentage of social media that isn’t about food, pets, and conspiracies. 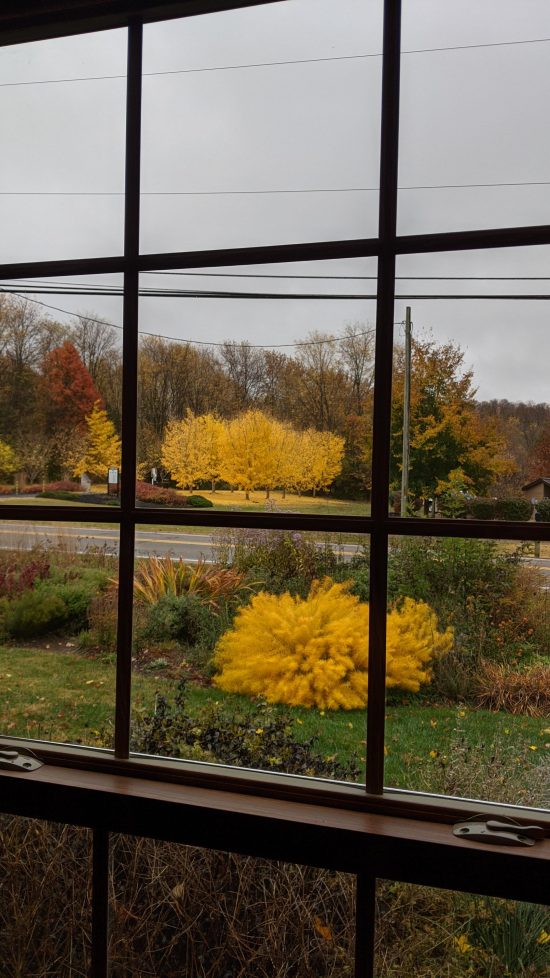 Another great view, this time from the dining room. Our Amsonia hubrichtii (Arkansas Bluestar) and the township’s gingko trees across the street. I posted this on Facebook and it got 205 “likes,” which I’m almost sure is more than twice what I got when I posted that I had survived a major surgery.

But in the same letter, you accused me of name-dropping too much in my previous letter to you. I found this terribly disheartening. When I finished that letter, I was thinking I hadn’t name-dropped enough. Truth is, I have lived most of my life not knowing anyone worth name-dropping. Then, suddenly, and unexpectedly, I did, and it was joyous. But, then, with a flick of your pen, all that joy was gone. Replaced, all over again, by self-loathing and doubt. 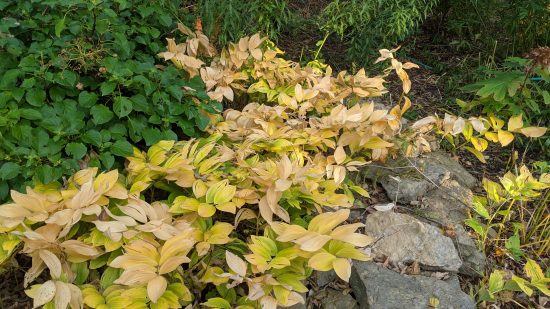 Other perennials horning in on the Fall color thing, here Polygonatum odoratum.

Ever since I read that, I’ve been mulling things over. The first thing I thought about was how much your perfect formula for a successful Instagram post reminded me of those sentence diagram exercises we used to do in school. Subject, verb, object stuff. And just for fun I diagramed your method and it revealed something disturbing. Ultimately, such posts break down like this example: “I [subject] am chopping down a tree [exciting verb combo] with Bill Thomas (or any of a hundred or so people who could be considered horticultural royalty) [object] at Chanticleer [prepositional phrase with its own object].” Do you see it? In such a post, the poster makes themselves the subject, the center of attention, even as they objectify a person they admire and a place they admire. Add a blurry photo and throw in several strategic hashtags and, bam, the “likes” are doubled from the usual five to at least ten. But at what cost? 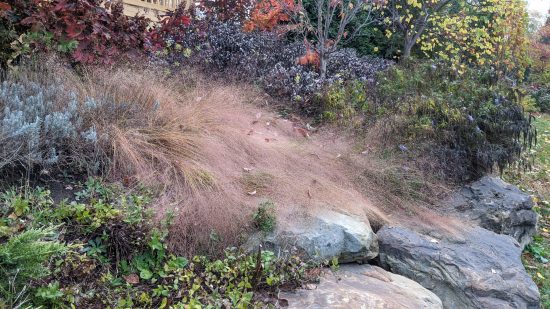 Muhlenbergia reverchonii ‘Undaunted’ at the Zoo. I like this one.

But, still wanting to share my joy in being in a position to name-drop while also wanting to double my Instagram “likes,” I worked hard to come up with a way around this, and I think I found it. If we just invert the formula, it is instantly and magically scrubbed of boastfulness. So instead of, “I am chopping down a tree with Bill Thomas at Chanticleer,” it now becomes: “Bill Thomas is chopping down a tree at Chanticleer and helping am I.”

I’m calling this “Yoda-fying” the perfect formula for a successful Instagram post and you can bet I’m going to stick to it from now on!

I hope you and yours are well. Say hello to Michael. We’ve got the Cincinnati Zoo & Botanical Garden’s Native Plant Symposium a week from Saturday. Colston Burrell and Roy Diblik will be speaking. Listening to them, I will. Then Thanksgiving. And somewhere between Thanksgiving and Christmas, our first grandchild. It’s going to be busy and exciting, but, then, it never isn’t. 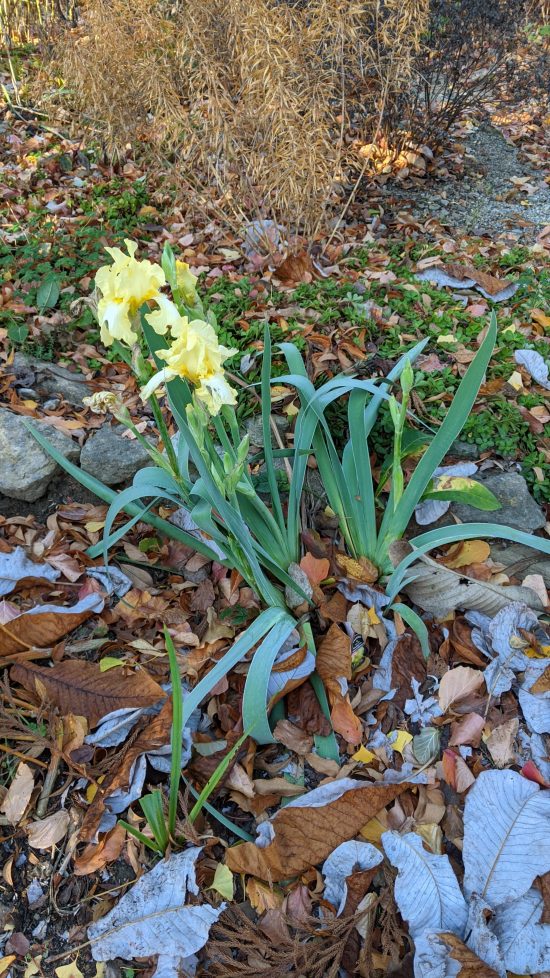 Damn the torpedoes! Iris ‘Harvest of Gold’ ignoring all the signs and staying up late! 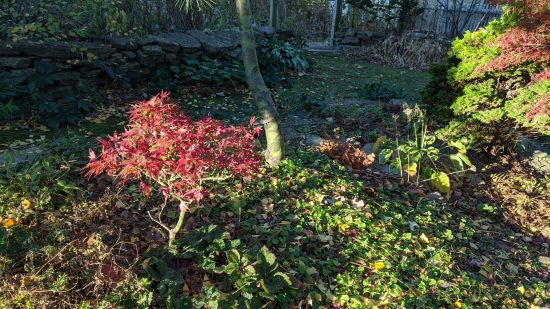