Inadequacy, Front, Center, and Heading Off in a General Direction: A Letter from the Midwest

You and me, at least, have an excuse. Temporarily, at least, we’re popular. For me, first time in my life. I honestly have no idea if being popular is normal for you or not. I can see you being both the Artichoke Festival Queen and also as the one driving the pickup that pulls the stage out from under her. But, yes, we both have been away for a lot of time this summer to learn and party and parley in some of the world’s finest gardens with some of the world’s best horticulturists. You went to Great Dixter. Weeks later, we and 500 of our best friends converged on Lancaster, PA for the Perennial Plant Association’s Conference. A week or two later, we both spoke at the Speaking of Gardening Conference in Asheville, NC, which also featured Carol Reese, Richard Hawke, and Joseph Tychonoviech. My God, that was so much fun. Much thanks to Andre Nus and friends who made that happen. Then, finally, you came here to the Midwest, the epicenter of diabetes, where Big Gulps flow like the Ohio River, or, if you prefer your beverages in bottles or cans, you can drive through specially designed buildings and buy anything from cigarettes to wine without ever leaving your car, to speak at the Cincinnati Zoo & Botanical Garden’s Plant Trials Day. 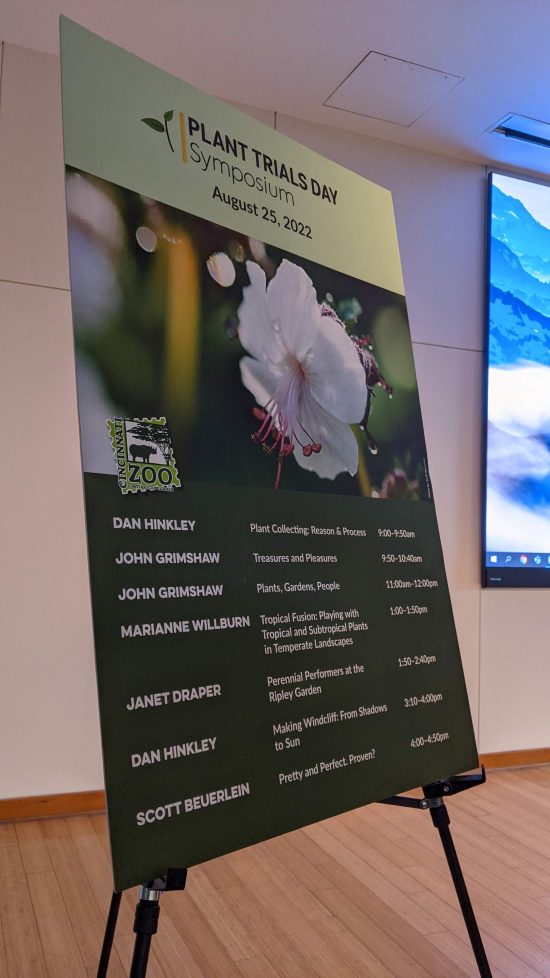 Side note: It was so fun how the drive-thru thing blew your mind our first time through, and, then, when I drove you through it again, it was hilarious that you videoed the experience. You know, here in the Midwest, we’re not used to, and somewhat suspicious of it, when we find ourselves suddenly showing fancy Easterners new things, so my friend from the drive-thru is still a little weirded out about you. Honestly, I can’t believe drive-thrus aren’t everywhere. It’s a great technological advancement that truly streamlines the beer and soda buying process.

But, I should go back to our theme here, which is about feeling inadequate. There ain’t nothing like gardening to humble ya. And there ain’t nothing like hanging with a bunch of other horticulturists who, themselves, have all been humbled. And you know all of them have. Ad nauseam. And then ad nauseam again and again. And what did our parents always tell us? Being humbled builds character. It also, apparently, creates characters. The PPA Conference proved that like nothing else. And hanging out with a bunch of characters who have character is a lot of fun! And reasonably safe.

So it only makes sense that those at the top of the vocation, those who have been the most ambitious and have done the most, are, logically, going to be the ones who have been humbled the most!  Which is why a relative neophyte like me is still pretty much a jerk and why a person like Dan Hinkley is anything but. He was about the nicest and most humble person I’ve ever met. He wrote a thank you note so nice it made me cry! 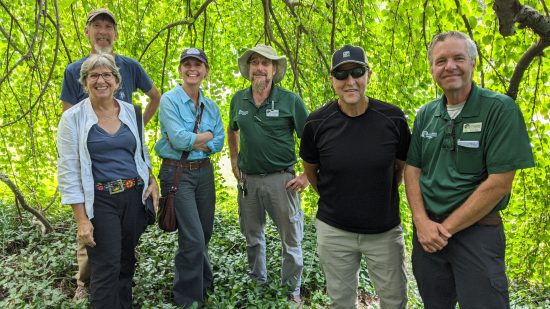 But he also made me laugh. Damn, is he funny. A lot of gardeners are, because—and I swear this is true—humor is the scab we cover our wounds with, and, of course, gardeners rank among the most wounded people on earth. But Dan’s well-honed, deadpan comedic delivery was simply brilliant. Comedian level brilliant. 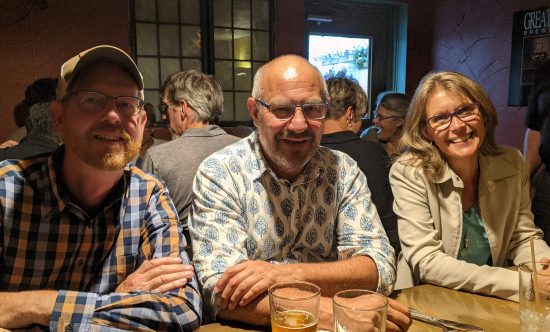 You and John Grimshaw, with Hans Hansen on the left.

Of course, John Grimshaw, who also spoke, was an incredibly nice guy and a great speaker too. And your talk was nowhere near as bad as all of us had feared. Nor was Janet Draper’s. Nor mine. Isn’t it funny, now in hindsight, how you, Janet, and I so completely dreaded being on the same program as Dan Hinkley and John Grimshaw? I don’t know how many times in the weeks leading up to the symposium that one of us talked one of the others off the ledge. But, we held our own. We did alright. The survey scores had all of us, from Hinkley at the top to me on the bottom, within a point and a quarter of each other. We should be proud of ourselves, and probably were, until we went back to our neglected gardens. 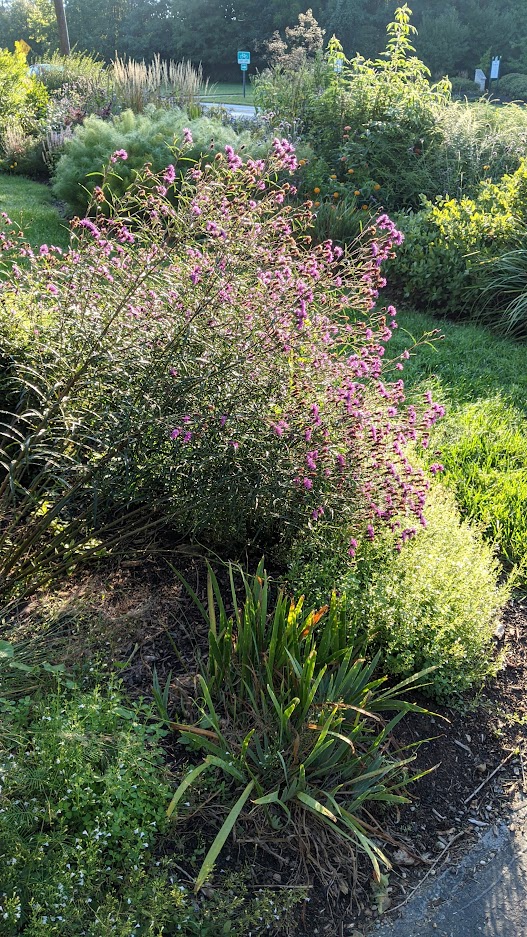 My front garden. Looks okay from a distance traveling at 50 mph, which is fine, because most viewers are at a distance and traveling 50 mph.

And speaking of feeling inadequate, you mentioned social media early in your letter as well. I know I need to improve and have steadily been trying to erode my resistance to that idea. Up to now, I feel like I can navigate Facebook well enough and can generally do what I want to do with it, which is post a nightly photo of my drink and/or dinner, occasionally 20-30 pictures of my garden, and, most frequently, postings of whatever rambling, semi-drunken, ironic thought just magically comes to mind as I blunder around while living my life. Unfortunately, I have more recently learned from you and others who are smarter with social media than I am that this is doing very little to advance my career, which has saddened me. 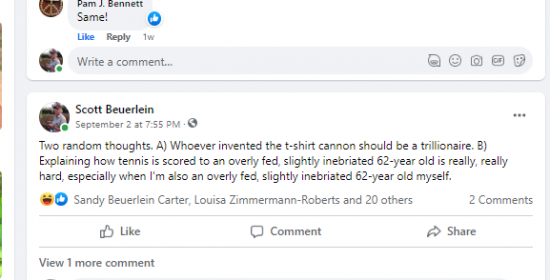 So I’ve been trying to get up to speed on social media, which you also mentioned early in your letter, and this has proven  even more humbling than my garden. Yesterday, I felt like I had finally reached the point where I was ready to advance. After years of mostly avoiding it and, even more so, avoiding like death any social media videos online and talks at conferences, I went to battle with Instascam. It was my D-day, so to speak. And, dang it, I lost. I lost D-day! In the parlance of this letter, that’s best described as, “Inadequate.”

So trying to learn Instascam left me reeling. Expanding my horizons on Facebook? Well, I’m even having a hard time with that. What, someone please tell me, is the point of a “story? If, in mid buzz, I’m motivated enough to open my phone and post a potentially lucid thought, then what is the freaking point of it automatically going away in a few days?

I think I know how I’m sounding and I don’t like it! Like just another old dog who can’t learn a new trick. And that’s wrong. Dead wrong. In fact, everything about that whole analogy is wrong. Truth is, you can teach an old dog a new trick. You just have to teach the dog why it should learn the effing new trick first! Because old dogs have been around the block a few times. They have learned that not all tricks are worth learning. Some tricks are really, really stupid. In fact, almost any trick we teach to dogs is stupid. And humiliating. Think about it! So any old dog that has anything going for it will have become cynical. It ain’t no dopey puppy no more and if, for whatever reason, you’ve decided that you want to teach it a new trick, you had better start laying down your best bullet points first. And, yes, okay, half corroded neurotransmitters from too much soda, fat, salt, booze, impure thoughts, and stressful living don’t help, and an old dog might be 14 and an old person might be 90, but I swear to God I could learn Tik Tok in ten minutes if someone were to first convince me there were any reason for doing so other than proving to the world how dumb I can be a thousand times more efficiently than on Facebook!

I resent it that that last paragraph probably made me sound like a mean, old codger. I hate it that the world has put me in this position. But at the same time, every fiber of my being wants to scream at anything Tik Tok I’ve stumbled upon, “You want to be seen? Accomplish something. Want to be heard? Then write something worthwhile, like a damned book. Get it through a damned publisher, and then a pissed off, underpaid editor, and then see if you can get someone to buy it. That’s at least four steps that each add a layer of credibility to the finished product. Sharing a selfie video of yourself lip syncing some “song” that will never stand the test of time while dancing suggestively in your underwear is exactly like a dog turd on the sidewalk. True, everyone is looking at it. But not because they want to. It’s because they don’t want to step in it.

My God! I hate myself.  I swear I used to be cool, like the dude in a Fistful of Dollars. Now I’m just Clint Eastwood. And I’m never going to get that call from Timber Press.

Anyway, on the home front, the weather turned a bit. Got some rain and I planted a carload of new plants. Found the experience almost joyful as these new recruits are about the only plants that don’t look like they’re being marched off to prison camp. Man, it’s been a brutal summer. And, yet, there are surprises. My Actea simplex, five years maybe from germinating in my basement, is now putting out wonderful flowers.

Our vacation started. It took three days of it to finally figure out where we’re going. Actually, we only got as far as a direction. We’re leaving tomorrow in a general direction. I’m sure it will be an adventure. 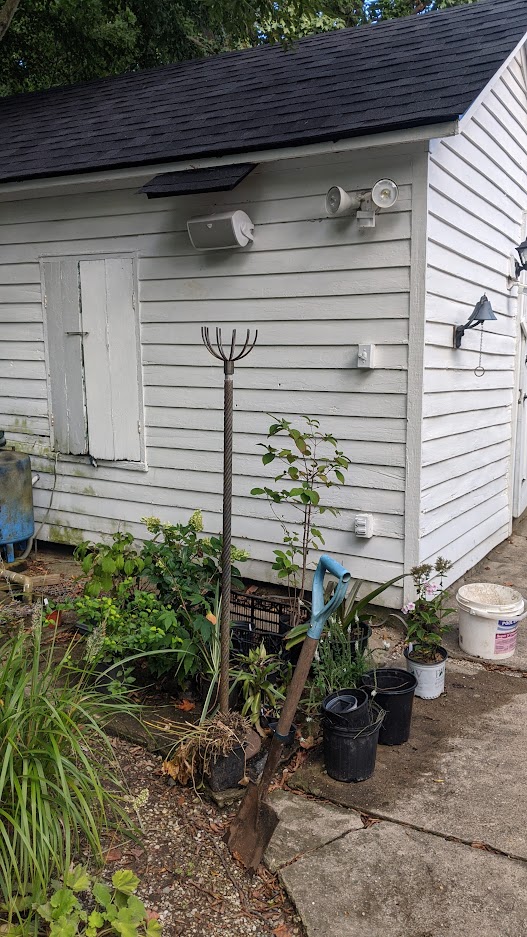 The last of the refugees waiting their places in the garden.

(Not quite all) Yours,

PS – Your Mrs. Willmott’s ghost foray spreading Peony seeds around my garden has me nervous because everything is so perfectly designed already. I feel like Tessio in The Godfather. “You can’t do this. It ruins my plans.”

PPS – Oh, in case you haven’t heard. The Queen passed away. All those people saying “God save the Queen” all the time, didn’t seem to work. Anyway, I’ve long ridiculed the Monarchy. It is so expensive. But, maybe I’m finally beginning to get it. Between the Monarchy and the United Kingdom being relatively small, it has always felt more like a family than a country to me, and that certainly isn’t a bad thing.