Lions And Tigers and Tropicals, Oh My!: A Letter to the Midwest

September dawns and I am completely unprepared for the fact that I was hardly in my garden in August and therefore terribly behind. The impulse in a media saturated world is of course to feel inadequate, as if everyone is doing life better, and is somehow in possession of six additional hours to every day, or adrenaline injections, or cloning technology; but the reality is, there is no magic behind what we scroll through, bleary-eyed, over our coffee and cornflakes in the morning.

If one is not there to do the work, and/or doesn’t have someone paid or press-ganged to do the work, the work doesn’t get done.  Most of the time it also doesn’t get photographed, reeled, snapchatted or, indeed, discussed.  That is media. That was media. That will be media.  We are wise if we absorb that lesson early.  I was THRILLED to see Allen’s post on the subject recently – highlighting Patti Smith’s dreaded artemisia garden nightmare after nine weeks away on tour. I have a similar nightmare daily gaining ground in the old mini-meadow. Brava Patti and Bravo Allen.  Honesty keeps people gardening. 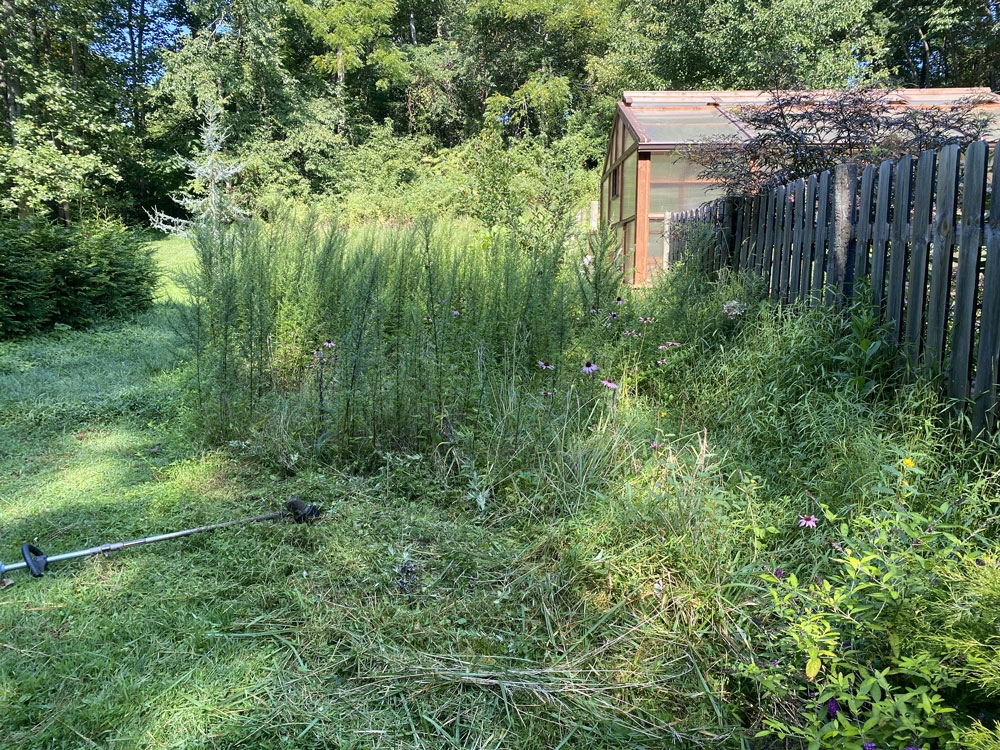 Here’s my old mini-meadow, now mugwort meadow, but soon to be a redemptive new perennial meadow. Lord what a mess. Updates to follow over the next six months.  Scraped the fertile turf for lean-loving seeds and look what shows up to the party: The Law of Unintended Consequences.

For the most part, the garden has kept up. Dense planting and a decent amount of rain has foiled many weeds and pampered the roots of the wanted. The issue is more one of editing carefully and strategically, particularly in areas where vigorous tropicals are flagrantly upstaging one another like aging actors.  It’s tough to cut out healthy foliage and pull flowering annuals up by the roots, but necessary in the showcasing of all. 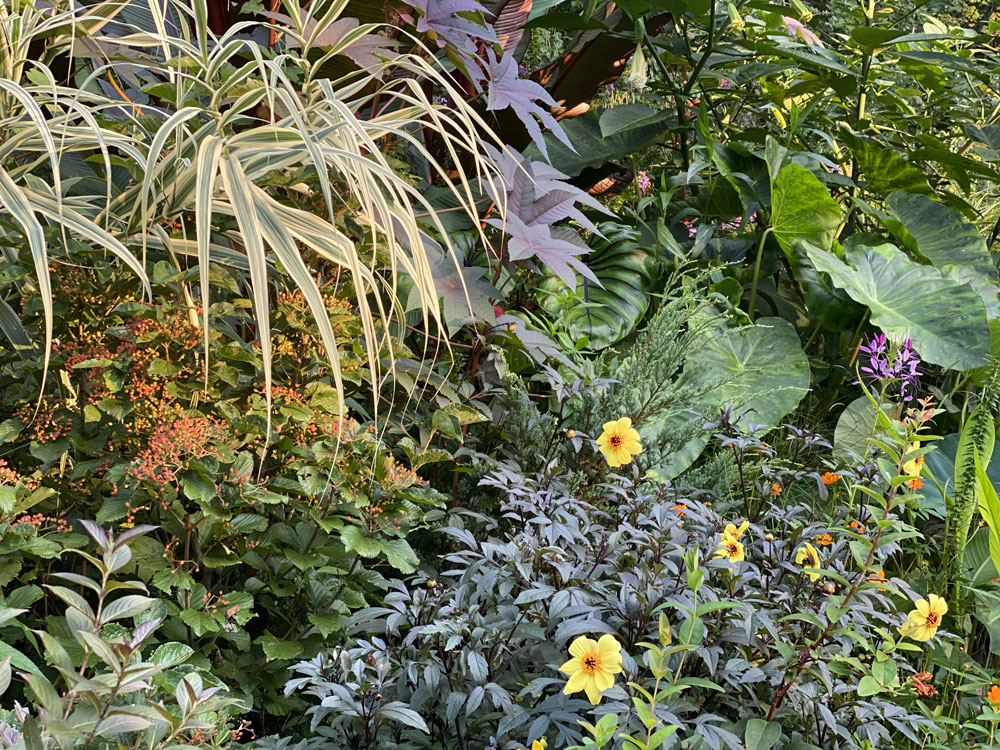 Meanwhile, less than twenty feet away, there’s this gorgeousness going on. It’s all about angles. 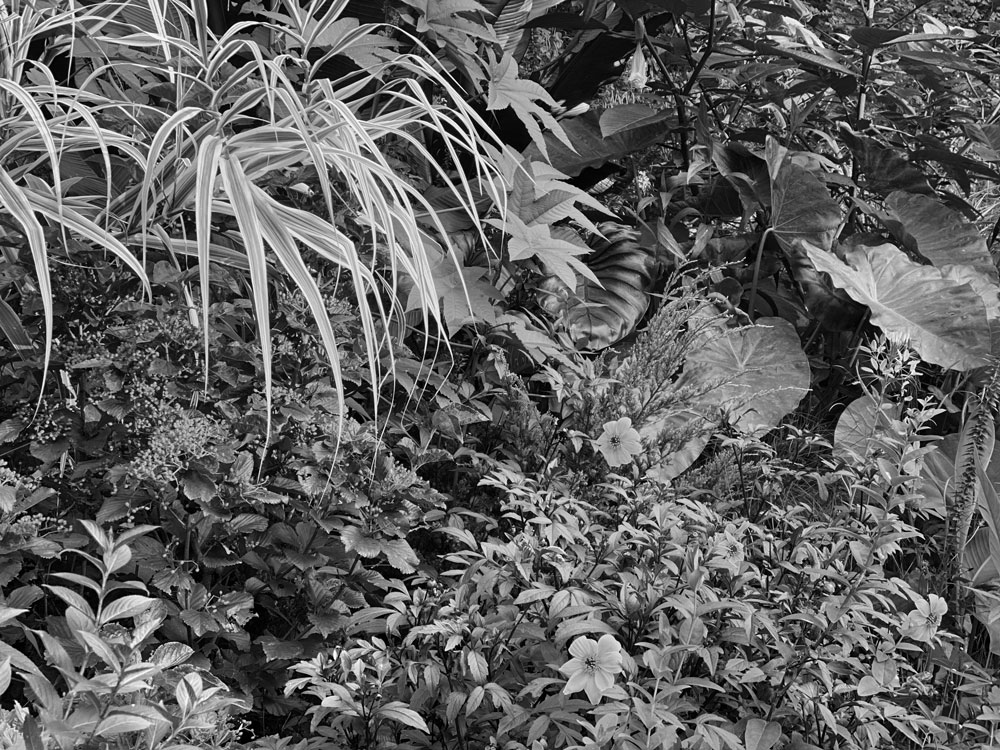 Tried out Dan Hinkley’s (and Fergus Garrett’s and John Grimshaw’s) tip on removing color from a shot to check texture, and I think this passed the test – well, perhaps a B+. Do you think they sit around in secret cognoscenti rooms coming up with these brilliant ideas, or do they just copy the hell out of each other?

Nevertheless, there is always a little disappointment when grand garden plans hit real life, and real life meant travel and a lot of it this summer– speaking to some fantastically engaged audiences, taking reams of notes, seeing so many gardens, and meeting some exceptional gardeners — for which I am heartily grateful.

You are responsible for the last week of gallivanting through some of the great sites of greater Cincinnati, and I want to sincerely thank you as it was a tremendous trip in so many varied ways, beginning with the novelty of a drive through liquor store on the way to a fantastic speakers’ dinner, and ending with an uproarious meal meeting your father and sisters. Here’s to the beautiful balance of plants and people in your life! 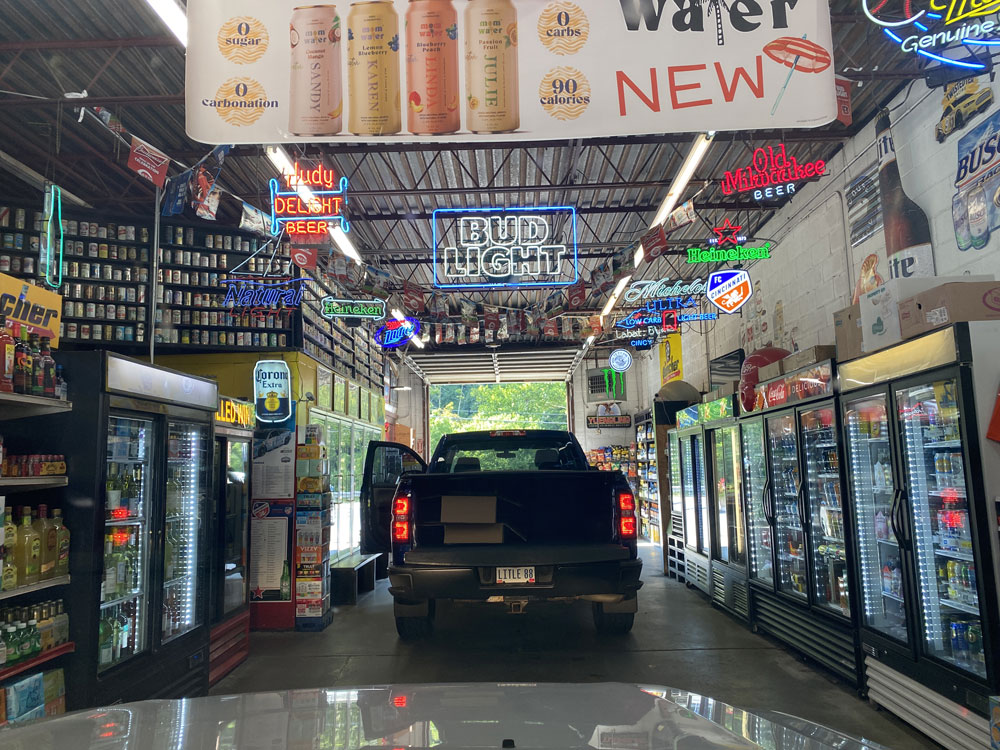 A first for this girl. 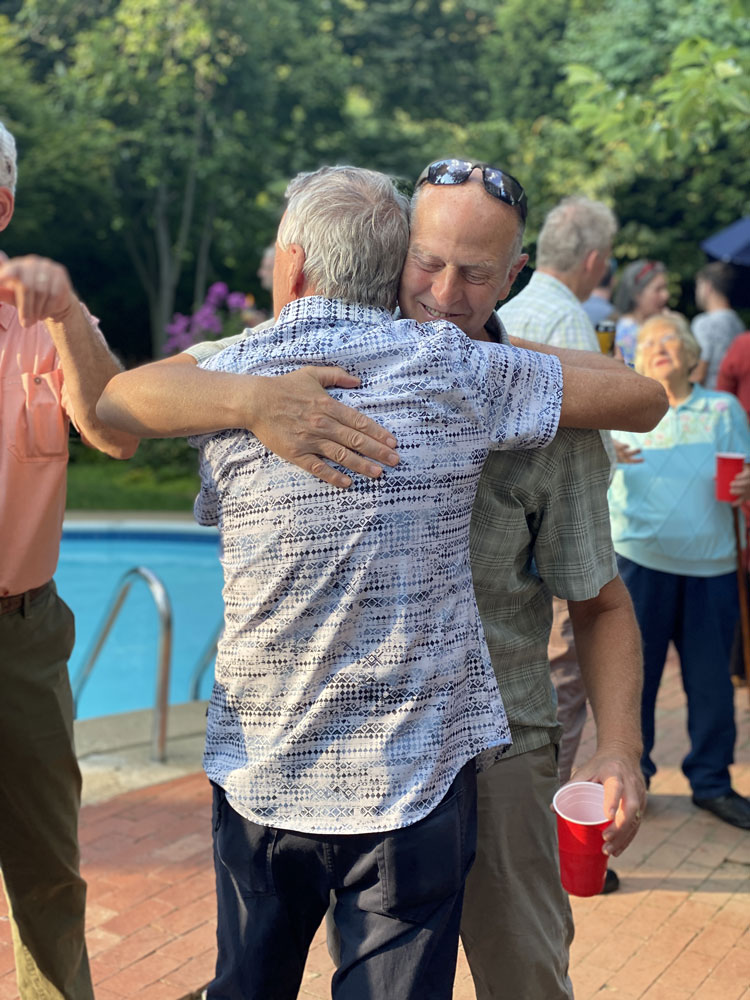 Seeing old friends come together after a long time was one of the highlights of the speaker dinner. Here Dan Hinkley and our Allen Bush joyfully reunite. In the background Clara Berger talks to Andrew Bunting and Paul Cappiello gesticulates wildly just off camera. The rare-wood pens that Paul hand-lathed for the speakers absolutely left me speechless.  Tough to do. I’ll treasure mine forever. 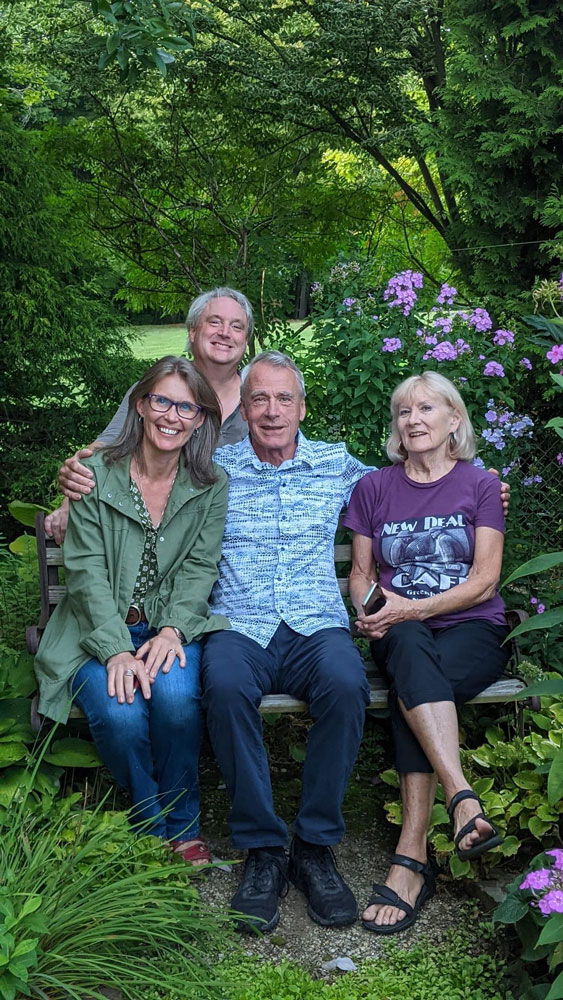 Another major highlight – meeting Allen Bush for the first time in person and getting the bonus of Susan Harris coming out to join us all too! 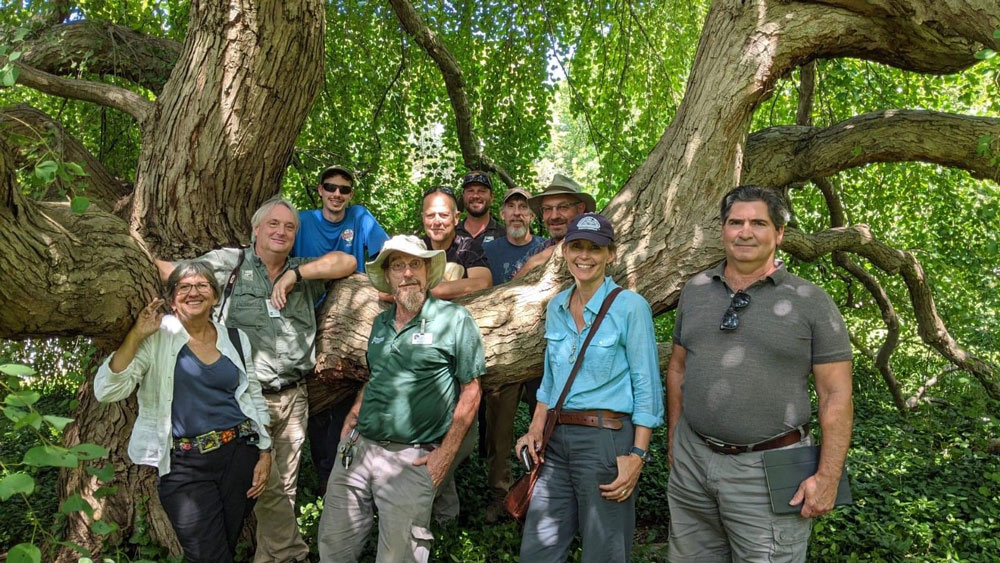 That said, I also want to congratulate you (as I did at Plant Trials Day), for your cunning act of professional sabotage, by putting me in a speaker’s line-up that would give Monty Don cause to swallow hard.

Your charming bait-and-switch technique is not to be equaled. “Oh Marianne, it’s so CASUAL. It’s so much FUN. It’s hardly an event, more of a long party….we hardly need to get out of our pajamas. I just want people to hear about how you deal with tropical plants…etc…”

You reeled me in like a marlin. And then, with weeks to go, a little more info.

Oh and by the way, Janet Draper, John Grimshaw, and Dan Hinkley are on that stage.

Oh and by the way, don’t let your glance linger in the audience or you’ll see names you never want to see holding plant lists and looking back at you. Or worse, checking their phones. 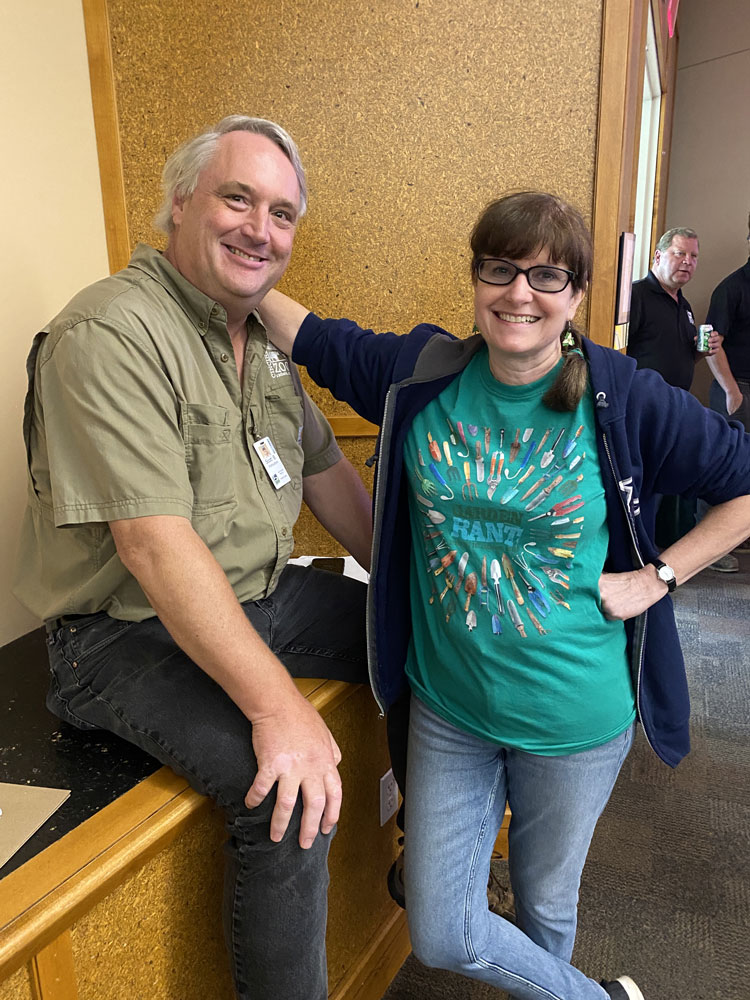 Michele rocking the GardenRant tee-shirt on Plant Trials Day. Your face resembles those in hostage videos, but then, you had to speak at this shin-dig too. I’m sure I wasn’t the only one fighting the desire to run away. Steve Foltz in the background.

Despite your cleverly disguised attempts, my very public nervous breakdown did not happen. I’m saving that for monetized YouTube content. However, I sincerely hope that there were those in that illustrious audience and at home on Zoom who took away a few thoughts on the new/old topic of tropical and subtropical plants.

Not only how to love them and play with them, but how to recognize when you don’t love them, when you’re fed up to the back teeth with them, and/or when you might be experiencing an abusive relationship encouraged by Genus One-Upmanship. Or your mother.

Guilt is a powerful motivator.  Hopefully the graphic photo of the agave once given to me by a dear, elderly friend, now dismembered and heading to the compost pile, will strengthen the resolve of those facing existential decisions of their own this autumn. 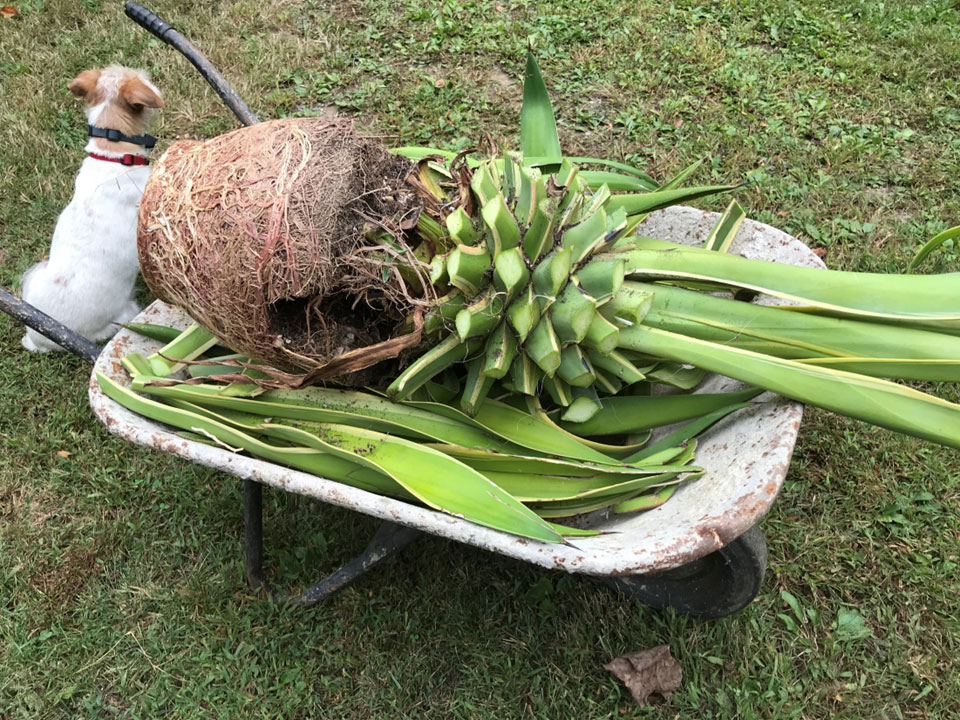 First degree murder. But you and I, and everyone who’s ever handled a 5 foot Agave americana knows it was simply self-defense. Pups were saved. I’m not a monster.

On the topic of tropicals however I do feel the need to clarify one point lest your feelings were inadvertently bruised. And it’s not so much your feelings (as we both know that ship has sailed), as those of Steve Foltz, who is an fantastic human being, wicked plant guy, and terrific Director of Horticulture at the Zoo.

During my presentation, I admit to a certain amount of harshness in my criticism of tropical bedding. The words “garish” and “coarse” were used.  Several times. I’m not alone in my thinking. Heads nodded in response — presumably also scarred by visions of tatty six-foot canna holding court over prostrate petunias in suburban entryways. But I would not have either of you think that I don’t appreciate a riotous display of seasonal color in public gardens, and I am thankful that I wasn’t publicly flogged and ritualistically fed to the lions the next day on our walk through that beautiful zoo of yours. 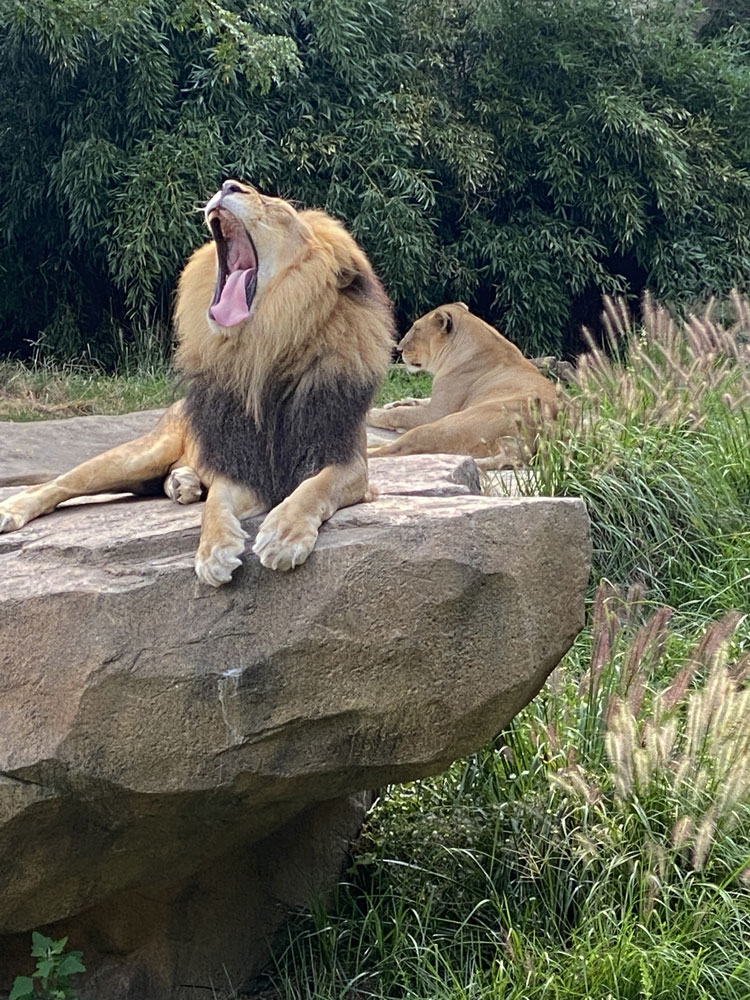 Don’t pretend you didn’t think about it.

It’s simply that I find myself in defense of designing with a genre of plants which by-and-large is an undiscovered country for many temperate gardeners. 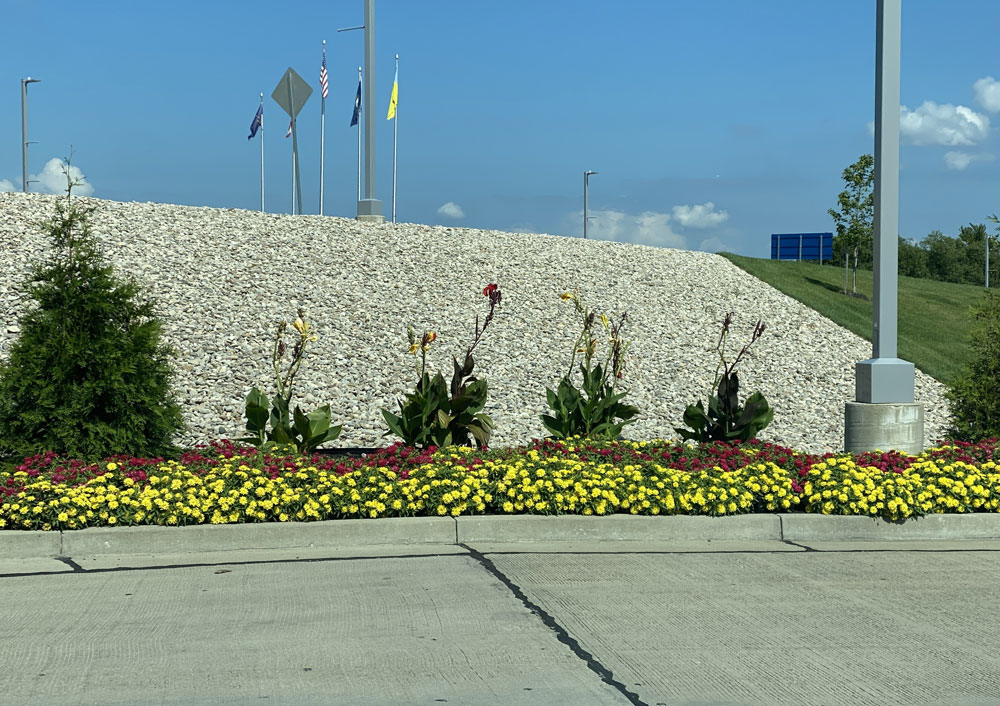 Abused canna at the airport. You can almost hear them crying.

There’s a place for bedding. Of course there is.  There is a place for every style of gardening in this big beautiful world, just as there is a place for every style of gardener.  Fergus Garrett of Great Dixter (don’t you DARE roll your eyes) is one of the first to stick up for bedding; and he could not be a better champion of wild, bio-diverse landscapes. But he also has an early background in public parks and knows the joy that riotous color can offer picnickers under drizzly skies forced to eat marmite sandwiches in damp grass.

There’s a reason that normal people (we are not normal you and I) who have difficulty telling a rose from a daisy love to go to Busch Gardens and Disneyworld and drink in the heady fragrance of marigolds and churros: Color is beautiful. Particularly when juxtaposed with asphalt and screaming children.

BUT. Where zinnia and echinacea have successfully transitioned between the world of bedding and the world of loose, rule-breaking design, our friend the canna is doomed to a life of cool-climate homeowners saying “Where the hell do I put this thing?” and invariably settling for smack in the middle of a bed of Wave petunias. All because they’ve never seen it lovingly played with in a temperate landscape – perhaps rubbing shoulders with berrying viburnums and frothy sprays of panicum. I’m just trying to alert people to the possibilities beyond traditional Victorian pairings. 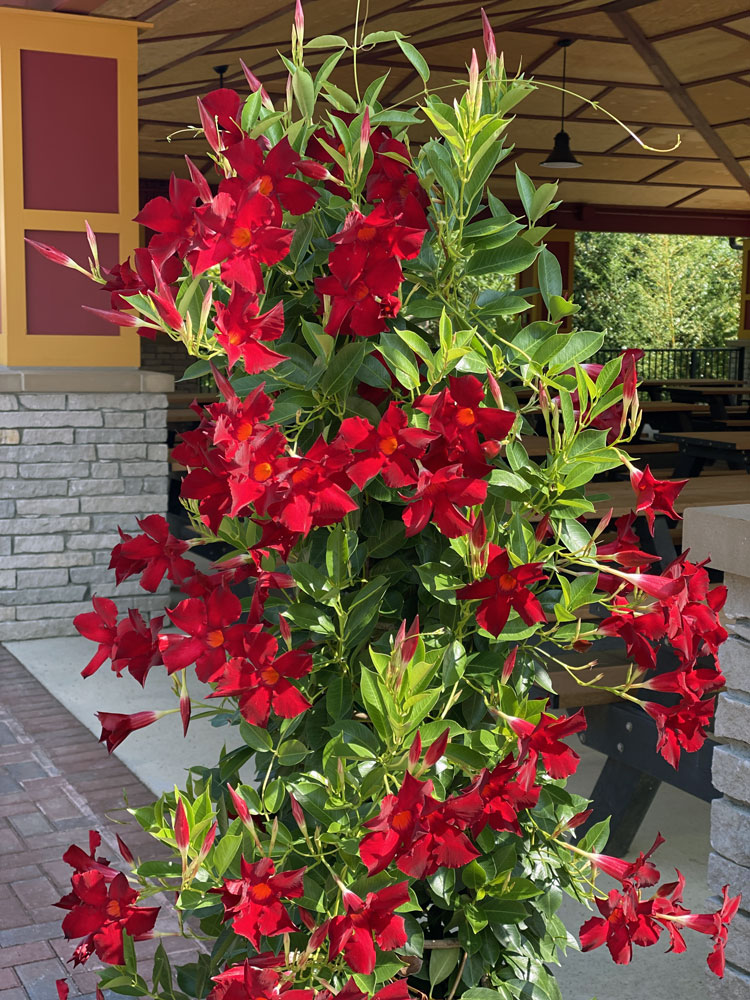 So all this to say,  no issues on the bedding front from this equal-opportunity gardener.  Most zoo-goers are so busy running down the elderly with strollers in an attempt to see Fritz, that they’re hardly going to notice the genius of using ‘Jade Princess’ ornamental millet to emphasize and soften the ebony legs of Colocasia ‘Heart of the Jungle’. Nice job BTW. 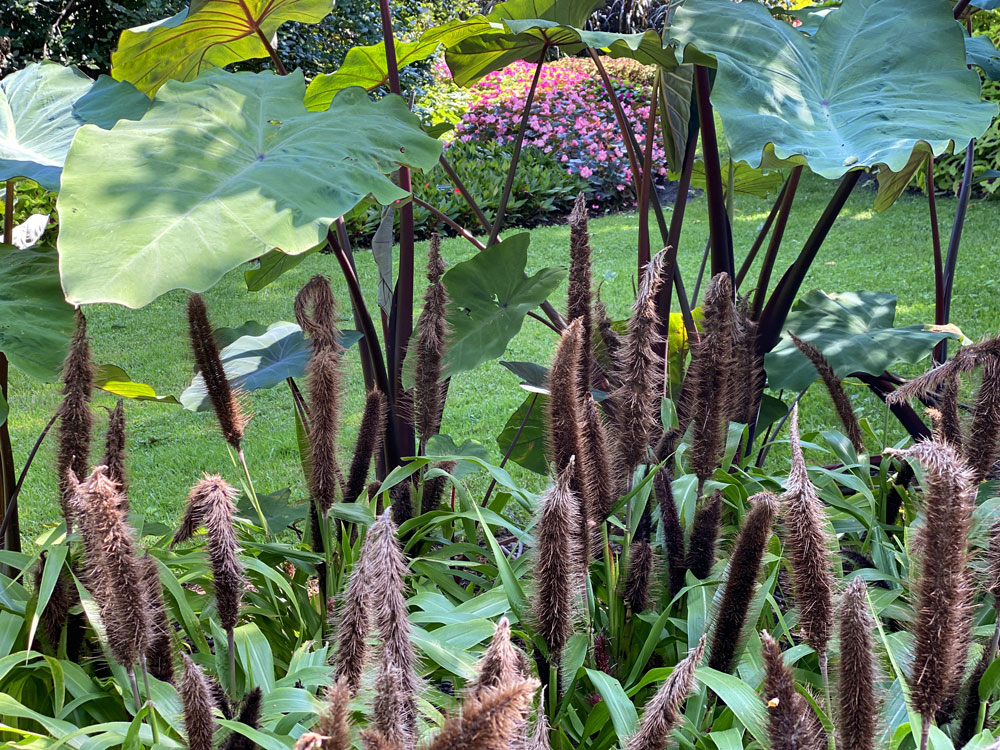 ‘Jade Princess’ and ‘Heart of the Jungle’ snuggle up at the Zoo.

Okay, must dash.  My word-count meter is warning me I’m in dangerous territory and your attention span ain’t what it used to be.  Tales of my own battles with the Dread Pirate Artemisia will have to wait for another time. Huge hugs to Michele – tell her she was rocking the old GardenRant tee-shirt at the symposium.  We’ve got to find another supplier for that.

P.S. Thanks for the Paeonia japonica seeds, unless of course, between their collection and the writing of this letter, they have been lumped into the ever-increasing list of don’t-even-think-about-it exotics from too-exotic Asia. In which case, thank you for the empty Ziploc bag. 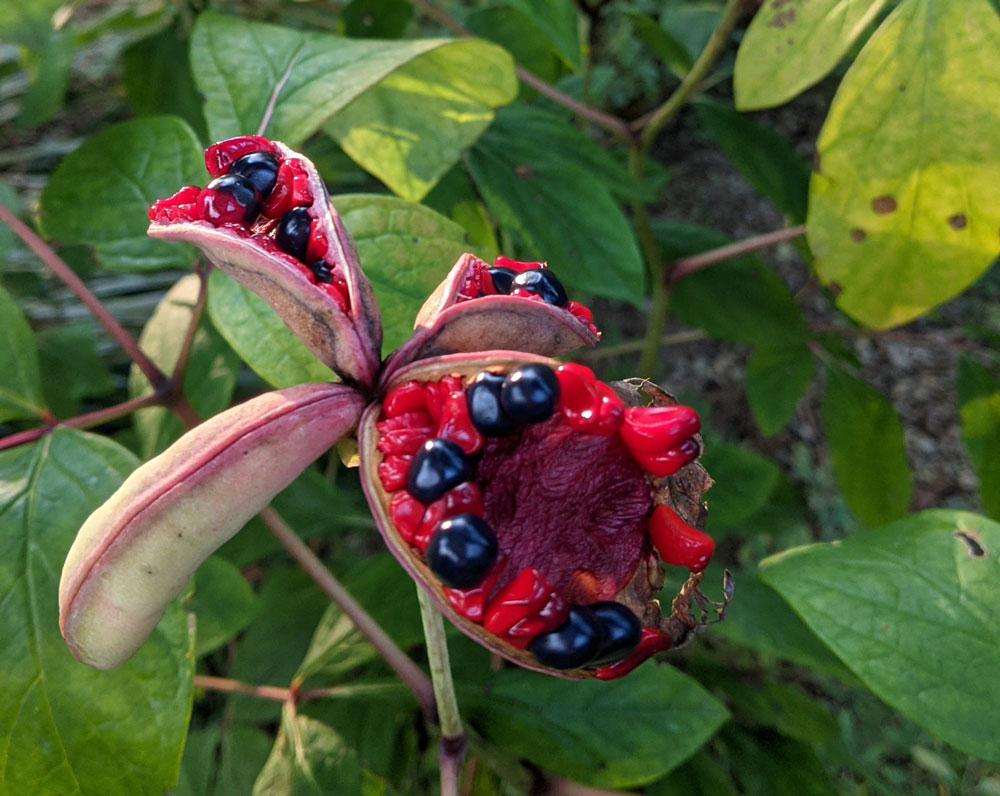 A seedpod that enchants, fascinates, and repulses — all at the same time.