Creeping Timidly Toward a Colorful Backdrop for my Garden 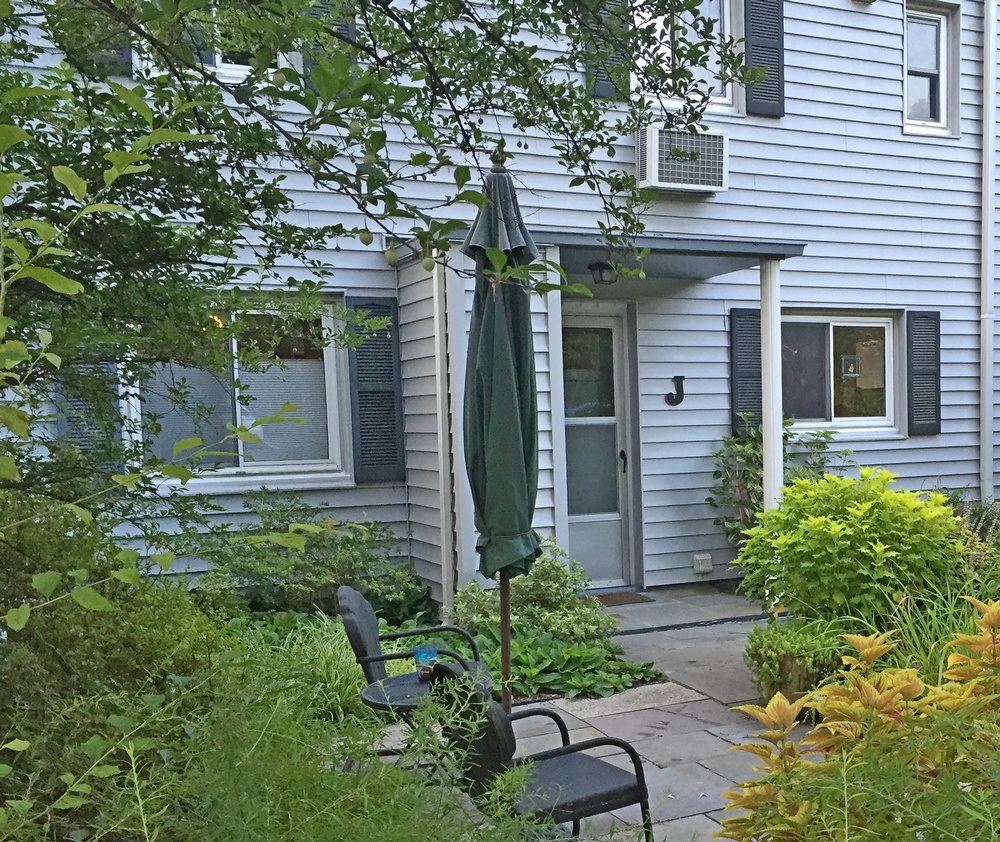 During the first years in my townhouse, this was the dull-dull backdrop of my front garden, with old grey siding, black shutters and metal chairs, and a forest green umbrella. You can’t see the pots here but believe me, they were all in similarly dull colors. I guess I wanted to fit in, and I sure did. 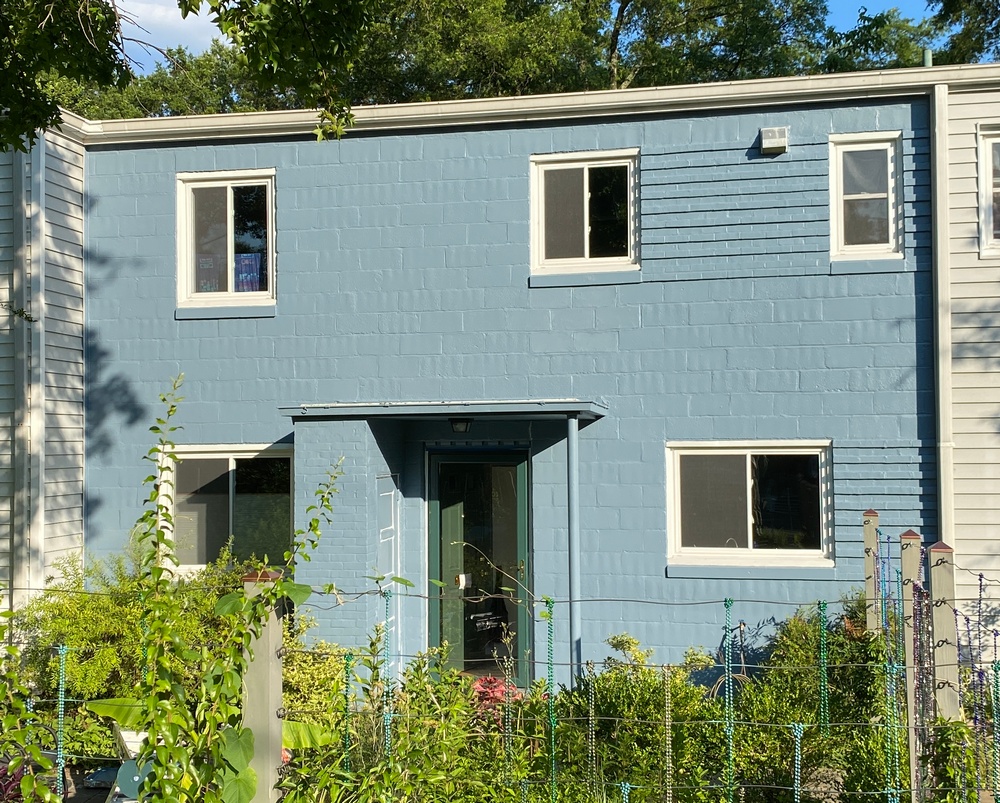 But early in the pandemic I started researching ways to add color to the house and soon realized I could just rip off the siding and paint the house a nice blue. Wow what a difference it’s made in my garden because to my eyes, anything looks better with a backdrop of Wedgewood Blue.

But notice in the foreground that even the poles that I had installed for hanging vines were painted grey. At least I dared to hang colorful beads on the wires. But this is as far as my adventures in house color went at first. All blue, with no accent color.

Next I took the teeny step of painting the house numbers and the pole near them mint green, a color I love that fortunately is on my co-op’s approved color list. And notice the Mid-Century metal chairs, formerly black, are now fuchsia! I hung a colorful metal flower and replaced the dark umbrella with one in pink and blue.

I’m almost embarrassed to point out the next tiny step I took, seen in the photo right above – continuing the accent color on the horizontal ledge under the windows. That required a return visit by my handyman/painter, which happened last summer. 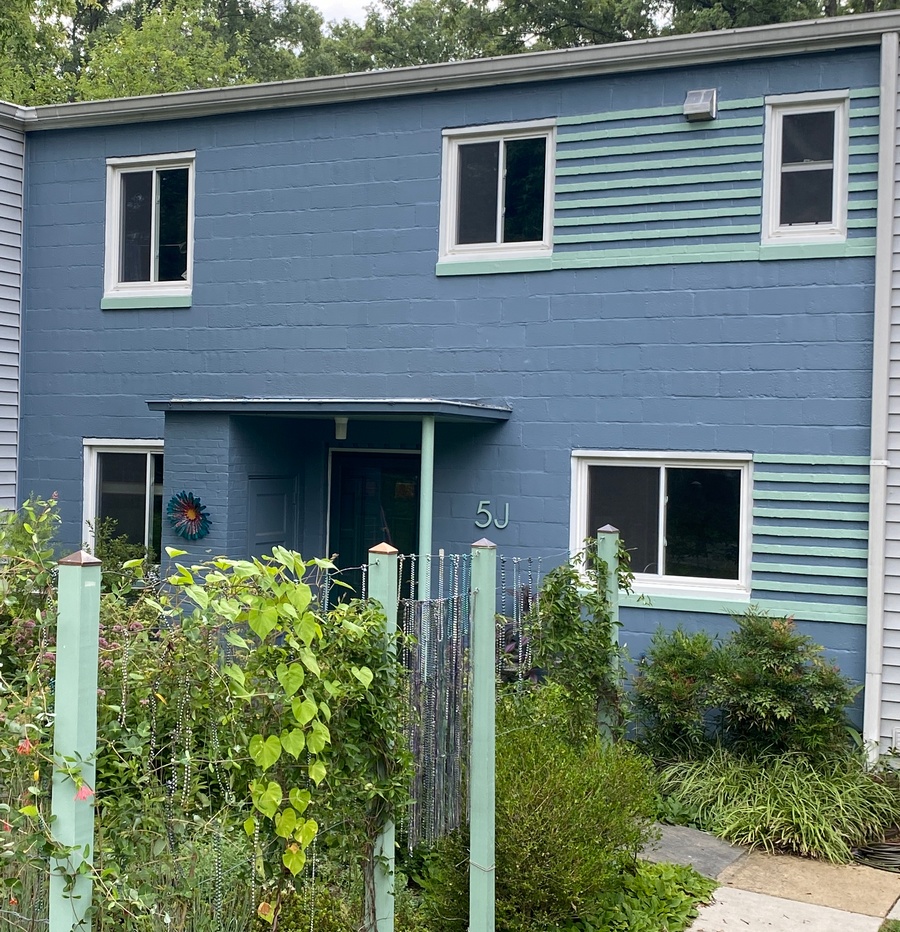 Well, this month I finally asked him to come back and complete the paint job on my house. Those horizontal brick bands (called “speed lines”) next to the windows are now the same accent color, as they should be in order to highlight this sole decorative element on the otherwise deliberately unadorned International Style cinder block facade.

Importance of the Garden’s Setting

I was never going to love this garden unless I at least liked the look of the house facade and outdoor furniture. (Just like I could never love it with the arborvitae hedge I first used to try to achieve screening, before switching to vines.)

So I contend that garden-making can start with improving the setting, the backdrop against which the garden is seen. Hell, I used to avoid taking photos of my front garden because of the old grey siding in the background. Now I shoot tons of photos of this garden and share them freely. (As regular readers might have noticed.)

Having the Courage of your Convictions

My timid, gradual transition from a bland to a colorful house reminds me of some wisdom I heard on the job years ago that I’ll never forget (and sometimes even remember to use).

I attended meetings of DC’s reviewing bodies for buildings and landscapes around the city’s “monumental core.” The long-time chair of one of them, J. Carter Brown, pretty much single-handedly reigned over aesthetic decisions affecting the city’s prominent sites and almost always got his way.

I tried to soak in Chairman Brown’s vast knowledge of art, architecture and good taste across the board, but I remember most his encouraging the planners and designers who came before him to “Have the courage of your convictions!” Gotta good idea? Don’t be timid. Go all in. Give your idea a fair shot.

I think that works for lots of elements in the garden – plants, for instance. I’ve learned that to have any impact at all, most of them have to be grown in masses. What’s the point of buying just one of a perennial? It’ll take two whole seasons before it’s grown enough to decide if you like it or not, or if it’s happy in that spot or not, and if the answer is yes, you’ll have to go buy more and wait another two-three seasons for the plants to really make a show of it.

With other garden elements, like patios, I say don’t skimp! Have a little courage. Budget-willing, of course.