I Hate my Arborvitae Hedge 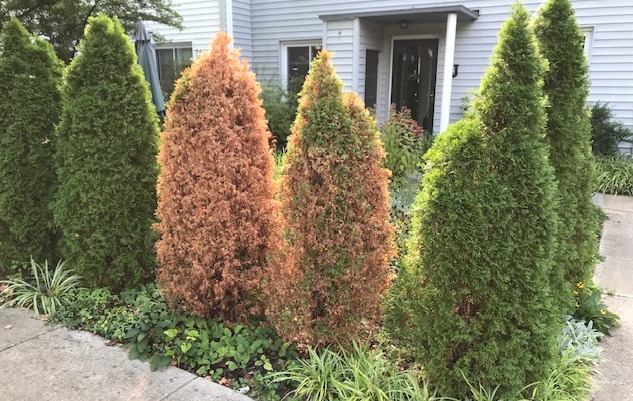 In order to provide some enclosure and block the primary view from my house of a parking lot, I did the only thing that my co-op’s rules would allow – use plants as screens. But even ardent plant-lovers like myself can see the troubles plants can cause when tasked with providing screening in small spaces. Especially when planted along sidewalks, but that’s another rant.

Problems caused by plants include getting too big, growing where you don’t want them (especially over sidewalks), and requiring resources like water and labor by the gardener.

Worst of all are plants used in single-species hedges, where varying growth rates and longevity can ruin the utility and appearance of the hedge, like mine in the sad photo above. 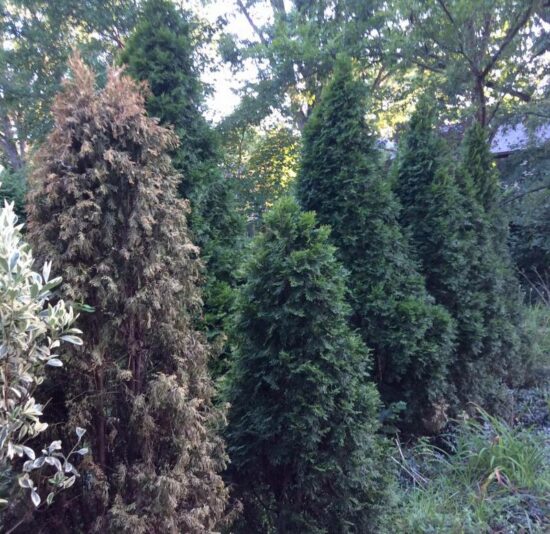 In the case of these ‘Emerald Green’ Arborvitaes, a stretch of hot/dry weather killed two of 11 (eight in the front and three in the back) and did the same to a similar percentage of Arborvitaes in my neighbors’ hedges (photo right).

So naturally we complained about it on the local Facebook group, which was  both comforting and instructive.

Some commenters suggested the problem was bagworms, but seeing no evidence of that, I’m inclined to agree with this comment:

Drought and possibly heat. A landscaper told me a few years ago that arborvitae are dying because our summer temps are getting hotter for longer periods of time, which isn’t what they like. Plus some of the winters are mild enough that some pests, which would normally die in winter, are able to live year-round.

I checked my plant notes and discovered this written on the ‘Emerald Green’ page: “NOT drought-tolerant.” Well, there you go.

So it looks like I hadn’t watered enough. (How are we to know? Conifers don’t warn us!)

With increasing temperatures and longer droughts, who wants to plant trees that can’t survive – even years later – without supplemental watering? Not me, so instead of buying two more of them, I’m just moving a couple of them from the back yard.

The Facebook discussion also shed light on a reason that just two of eight trees in a row bit the dust: they somehow collude to sacrifice just enough of them so the others may live!

Sometimes if one tree gets really sick it will dump all its nutrients into the soil for the trees around it so it dies but the others don’t. There was a Radio Lab about how mycorrhizae are a network between trees. But I’ve also seem all eventually die, one by one.

Then just when I think I’m getting a handle on what happened, I read this:

If it is the one on the lowest ground I would say last years excessive wetness killed some of the roots, followed by our recent hot dry spell which finished it off. I’ve seen it in several hollies and some trees. Plants don’t tolerate excessive moisture followed by heat and drought. If it is in a low spot Magnolia virginiana might be a better choice.

Or how about just construct a privacy screen and skip the plants altogether? Well, there’s good news on that front because the co-op has recently approved a process for custom-designing and approving screens! 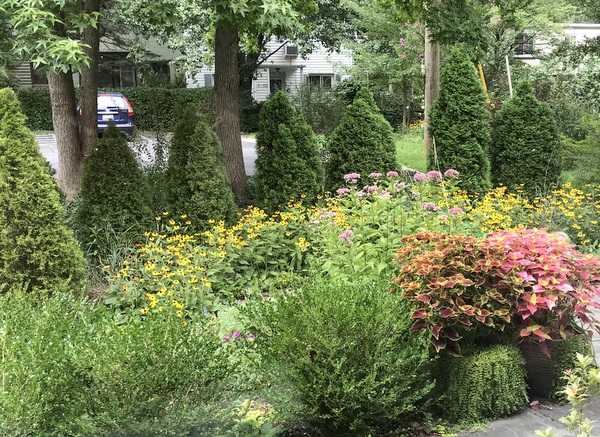 See how the parking lot is elevated in this view from my kitchen? That’s why medium-height plants won’t do the job. (The lot’s almost empty in this shot, so you’ll have to imagine looking out onto a row of cars facing my house.) My dream screen would be just 2′ high but start at 4′ above the ground.