Strategy and Self-Seeders: A Letter to The Midwest

I sense sarcasm in your last letter.  Huge heavy wads of it if I’m not mistaken.

The recrimination is deserved. You are correct, never once in the 2403 words of spectacular chaos™ that made up my last rambling letter, did I ask after you, Michele, or your newest it’s-going-to-kill-me project (one assumes there always is one).  I plead being high as a kite on emotion.  It dulls the faculties but sharpens the inner-narcissist. No wonder everyone is so into it these days.

Two months have gone by since I returned from the Great Dixter symposium, and it’s been fascinating to sit back and watch myself grappling to hold onto that glorious feeling of curiosity, joy, and positivity, whilst dealing with all the real-life demons that make every damn one of us completely insane.   So much for “life will be simpler in the digital age.”  HAL-9000’s life will be simpler. Not mine. 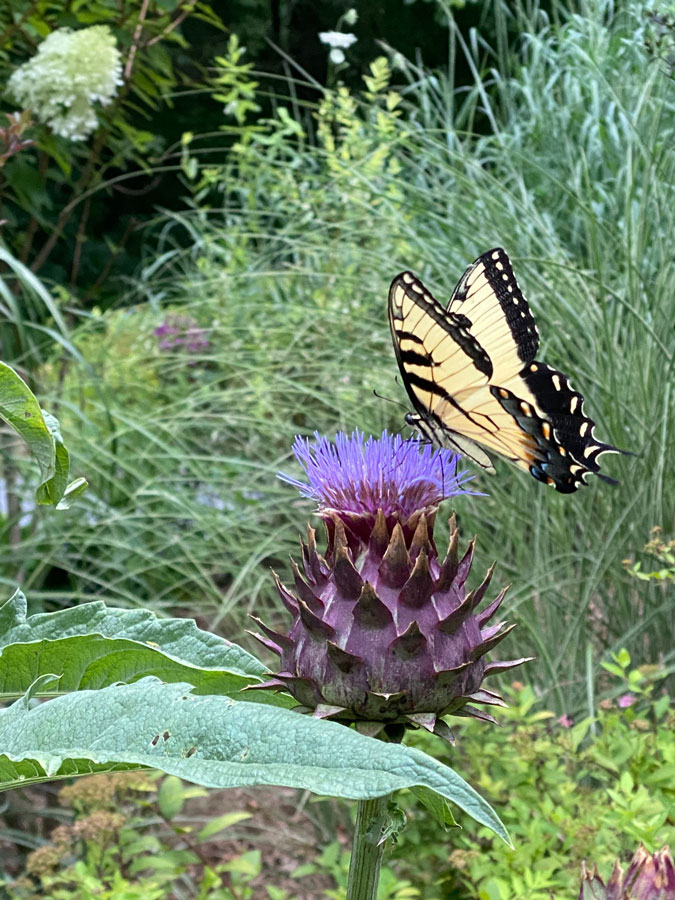 Thankful for the little moments that remind me. Butterfly and cardoon flowers – so simple. So lovely.

Today was a fun exercise – trying to upload receipts on horse-and-pony internet to a site that requires Michael’s phone number as recovery.  Once we were all of us on the same page with some unintelligible password (me, him, and presumably the devil HAL), we then played a fine game of two-step verification three times, punctuated by time-outs when Michael took phone calls and couldn’t look at his texts. Good times.

But enough of the demons. Overall, I think I’m managing to hold onto at least 50% of the joy and 98% of the technical skills I gleaned at Dixter. Never have perennials and grasses been so well (and so quickly!) staked around here, and I’ve been much better at editing my annuals and volunteers.  Partly because of watching the gradual shift in seasons at Dixter, partly because I have so few this year because I attended Dixter. 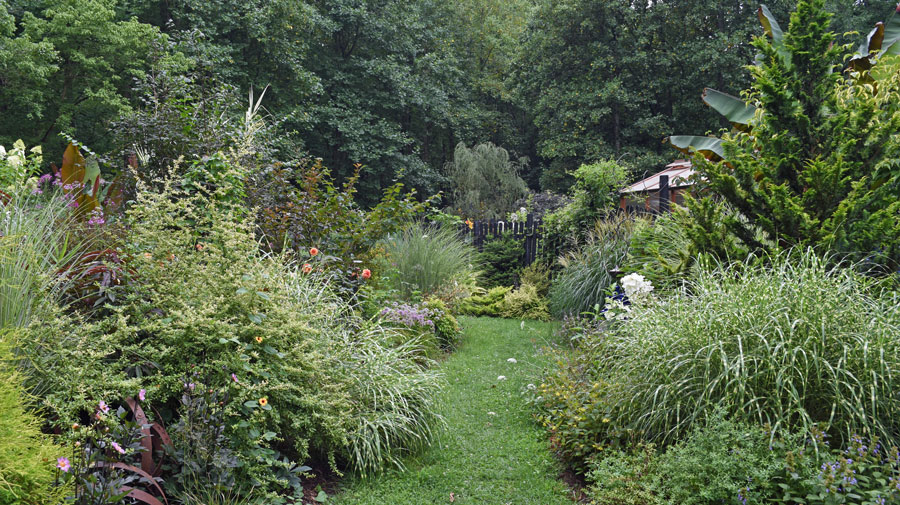 Shocking lack of color in places. But better than the view in March, as I’m sure you remember.

Spring travel wreaks havoc with delicate seedling flats.  And there is the little issue of mulching the main serpentine bed within an inch of its life in May to finally claim all 120 feet of it away from the stilt grass, mulberry weed, and burr cucumber.  Mulching like that has its costs, and one of them is a distinct lack of the self-seeders upon which I shamefully rely.

So, no zinnias this year — no sweet masses of Cosmos ‘Purity’ (or at least, sons and daughters of Purity). No velvety umbels of orlaya, and the bupleurum and poppy show was sad verging on tragic.  Verbena bonariensis, which I thought could not be stopped, stopped. The various white summer umbellifers that make both me, and the tiny wasps, happy made a small effort, and then the deer got them. 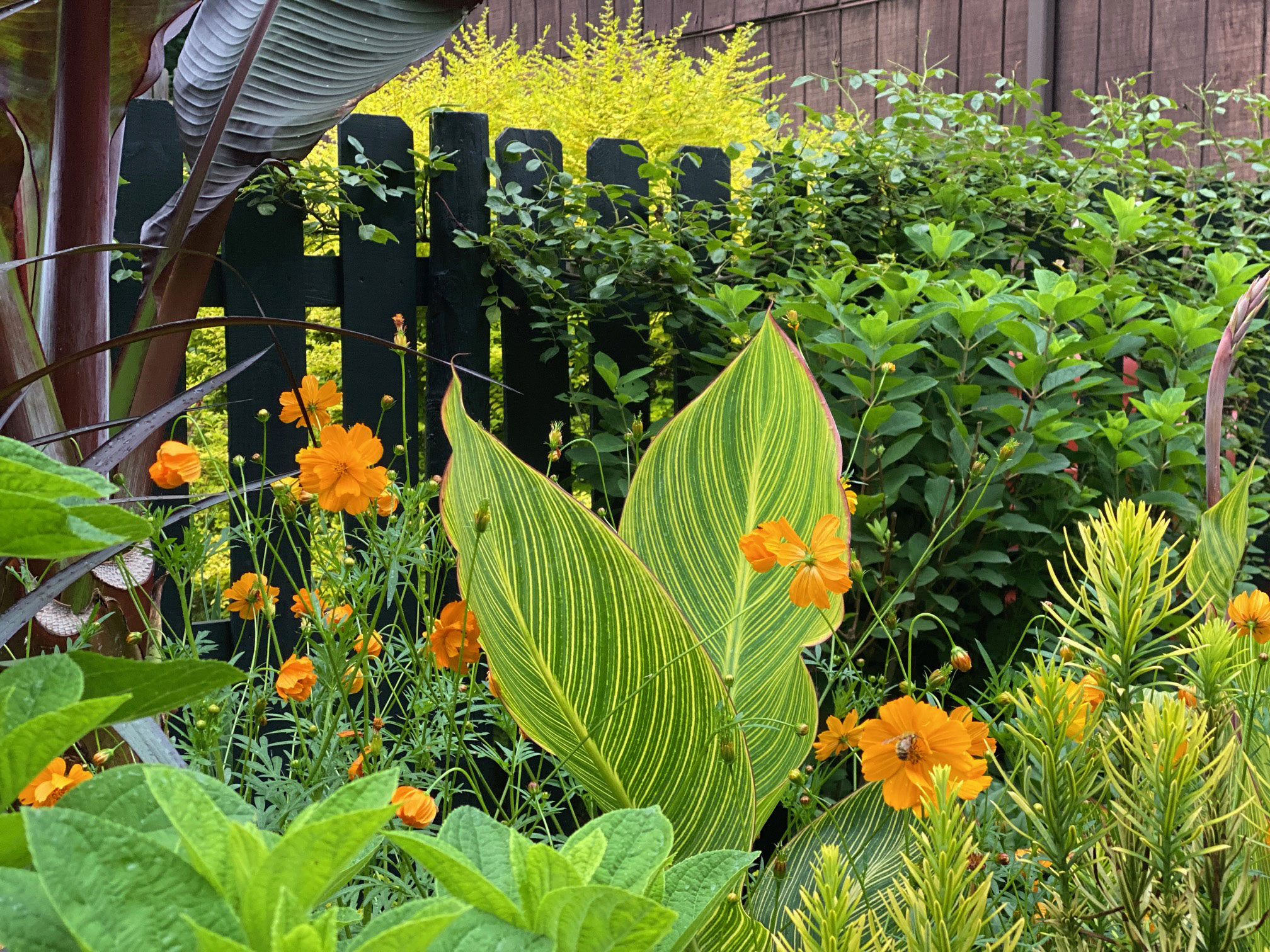 There’s a few self-seeders – such as orange cosmos seeded around the canna.

But there are happy, bright orange cosmos and violet and pink cleome beyond the dreams of those who dream in violet and pink. Lobelia siphilitica is about as preventable as 15th century syphilis, and so I have something to look forward to in late summer. And I see this morning that snakeroot has made further inroads here and there, which is amazing as I was Shiva-like with the weeding – often without my glasses – and the seedlings look just like a number of other bad actors.

One of the things so helpful at Dixter was watching the role of the cow parsley of all things (Anthriscus sylvestris).  When we arrived, it was coming to the end of its useful life as a repetitive, frothy and unifying element, and was carefully being edited out of the scene.  Not all at once, but gently and strategically, to make way for new players and new combinations (having already been edited earlier in the season).  Some were pulled, some cut at the base to avoid disturbing the roots of other plants.

I think that many gardeners, myself included, are so thrilled to see a seedling of a flowering plant coming up (much less thirty) that we are loath to carefully edit.  And, let’s say that this [lack of a] strategy goes tolerably well, so that you have massings that please the eye with color, or froth, or whatever. All good right?

Sure, but it could be better. They could enhance nobler plants than themselves (because let’s face it, it’s cow parsley), instead of dominating the scene and then leaving in a huff of browned flowers and empty spaces.

For instance.  I’m drowning in cleome right now.  I love this rampant self-seeder.  I don’t love grabbing the sneakily-thorned stems and needing a tetanus shot, but I love that it offers so much color and energy to the summer and early fall garden.  I am also one of those strangely-tuned creatures who finds the resinous scent of the foliage extremely welcome – especially on heavy summer nights.  While the broad leaved tropicals are just getting started, it’s filling space with its cannabis-esque foliage and beginning a bloom cycle that will last for months.  And, in lazy or travel-heavy years, it gives me pops of color throughout a bed that I honestly don’t deserve.

Soon, it is 4-5 feet tall, and yes, the color is there, the flowers are exquisite and fun, and in-your-face, but it’s blocking the view of a leaf-layered ensete trunk; or the upturned faces of colocasia; or completely shielding a young dogwood from view.   And the weak gardener stays their hand because, well, it’s color, and well, it’s handling the heat, and well, a million reasons. 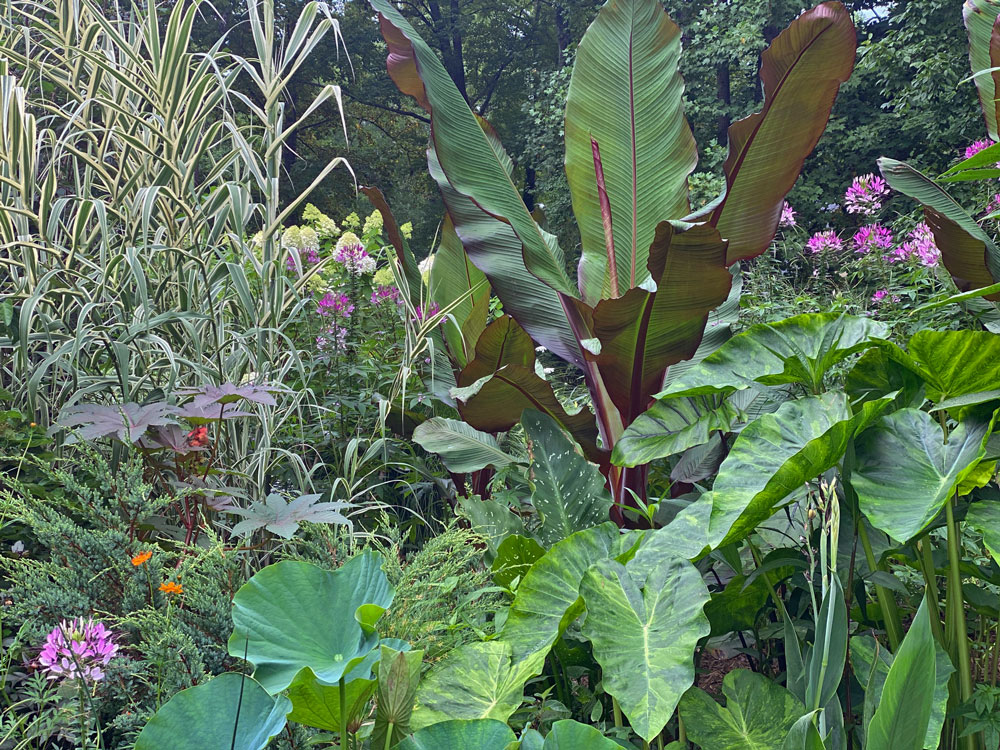 Probably my most “tropical” area near the pond. Because I’m terrible at planning out photos, you just have to imagine about 50 cleome blocking all that wonderful foliage about 15 minutes before I took this shot, leaving just a few bits of violet here and there.  Problem is, I usually just get on with the work and then think….oh that could have been a teaching moment.  Damn.

But I am less and less a weak gardener, and thus I went through this year and pulled and cut and arranged, much like I would to a bouquet that needs refreshing.  The result is unifying color throughout the bed that frames the foliage I love so much.  I have fortitude forged at Dixter to thank for that.

I am sorry you are dealing with deer and rabbits.  It’s hard to express to non-gardeners how upsetting it can be to spend time and energy on a plant only to find it destroyed in an evening’s browse. The rabbits and groundhogs aren’t a problem here because of lovely Mungo and his Jackrusseldom. But this has been my worst year for deer.  It probably has much to do with Michael sleeping in on Sundays during hunting season.  This January I will roll over and shove him out of bed with both feet at 5am (with promises of a bacon and egg breakfast for the successful marksman). My spray of choice is Deer Out, but I’m finally forced to switch it every two weeks with Deer Stopper II.  Please tell me, what is the point of planting for fragrance if your entire garden reeks of minty rotten eggs and clove cigarettes? 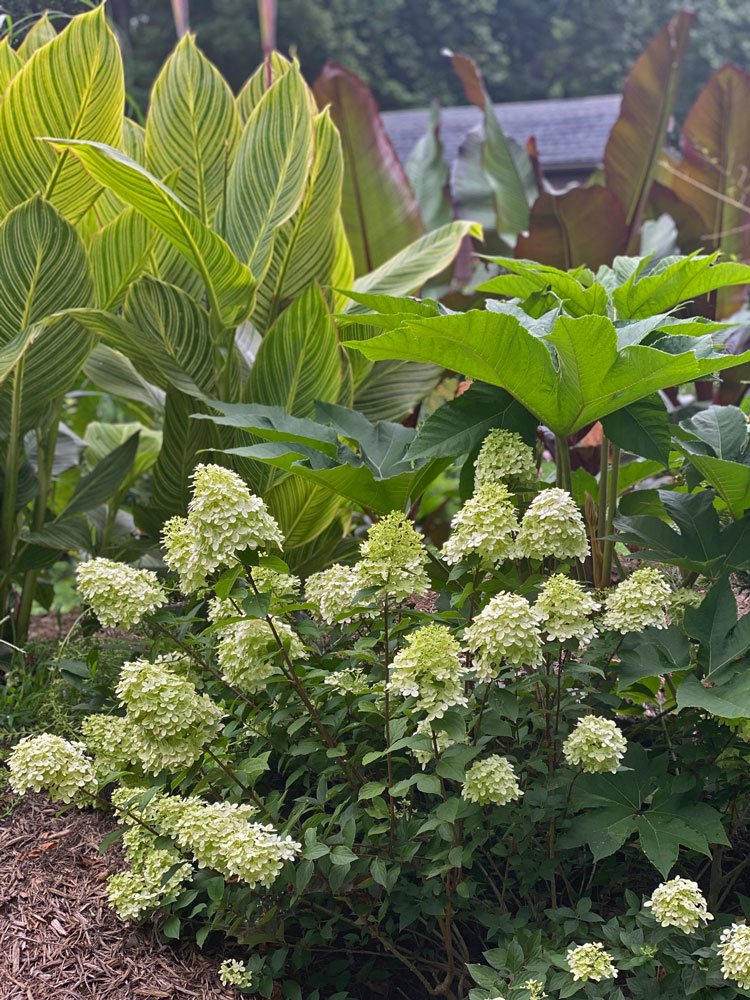 This is the new Limelight Prime hydrangea from Proven Winners – still young, but topping out at 4-6 feet eventually. It’s great, but I’m happier with my original Limelights because they are taller and work well limbed up away from the deer. This is going to require constant spraying – and it has.

You may be interested to know that I have Yew & Non-Yew on my shelves — though it had been years since I read it. Your letter sparked a cocktail-hour review of its contents.  James Bartholomew is an excellent writer. He bites without breaking the skin, and manages to circumvent cliché on a topic that would tempt lesser wordsmiths into verbal slapstick.

I don’t think I ever took the “Are You An Upmarket Gardener?” quiz on Page 13 – so I did so, with assumptions aplenty. You will be shocked to find out (I certainly was) that where you rate as “An unbearable garden snob” – I occupy that beautiful middle ground of “You are a ‘Yew” gardener of distinction without being a bore about it.” (my emphasis) 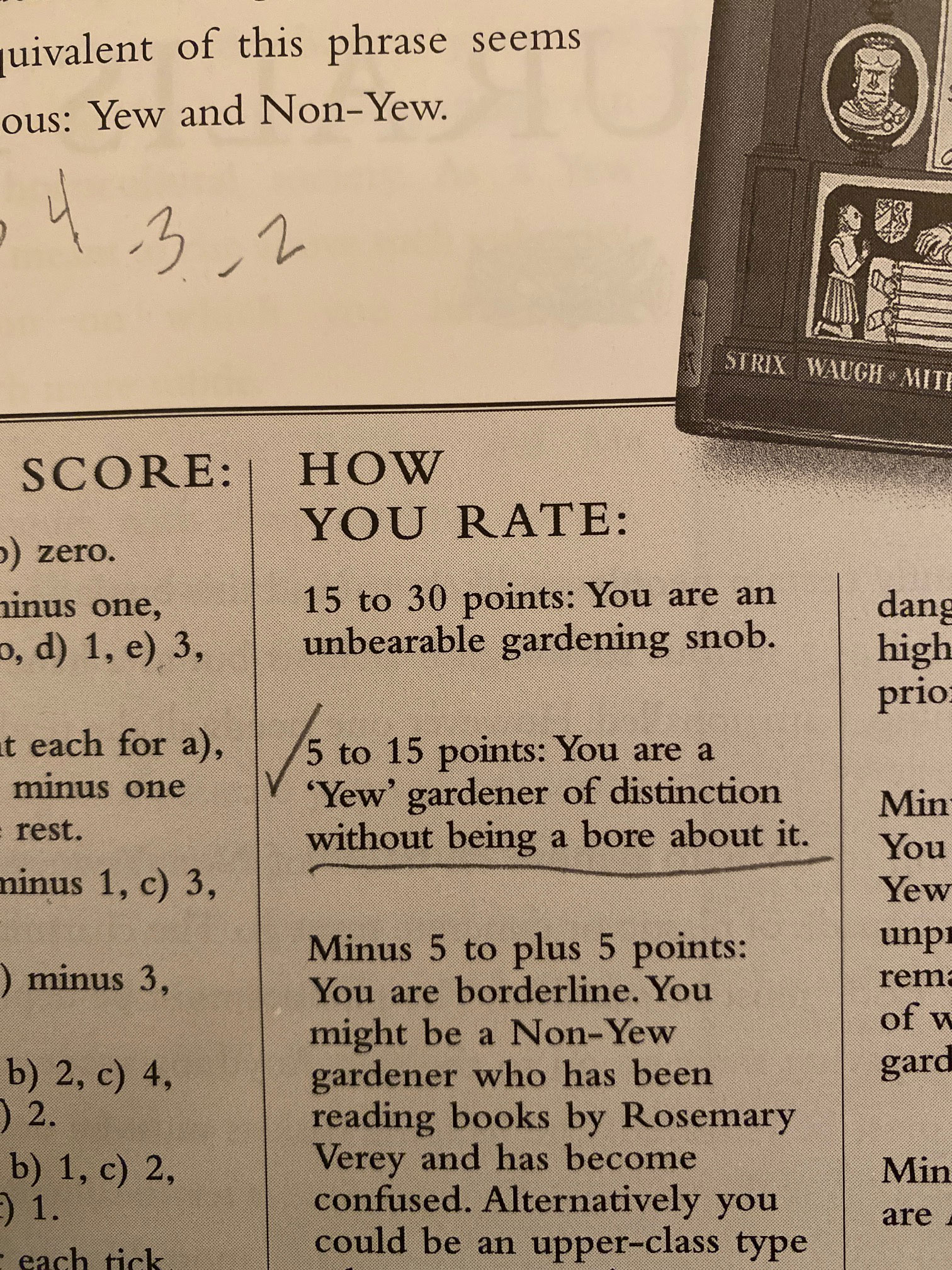 This puts our relationship into a different light.

Perhaps you just need a bottle tree? Happy to consult on that one when I’m in Cincinnati so you don’t lose your cleverly curated angle of affability. 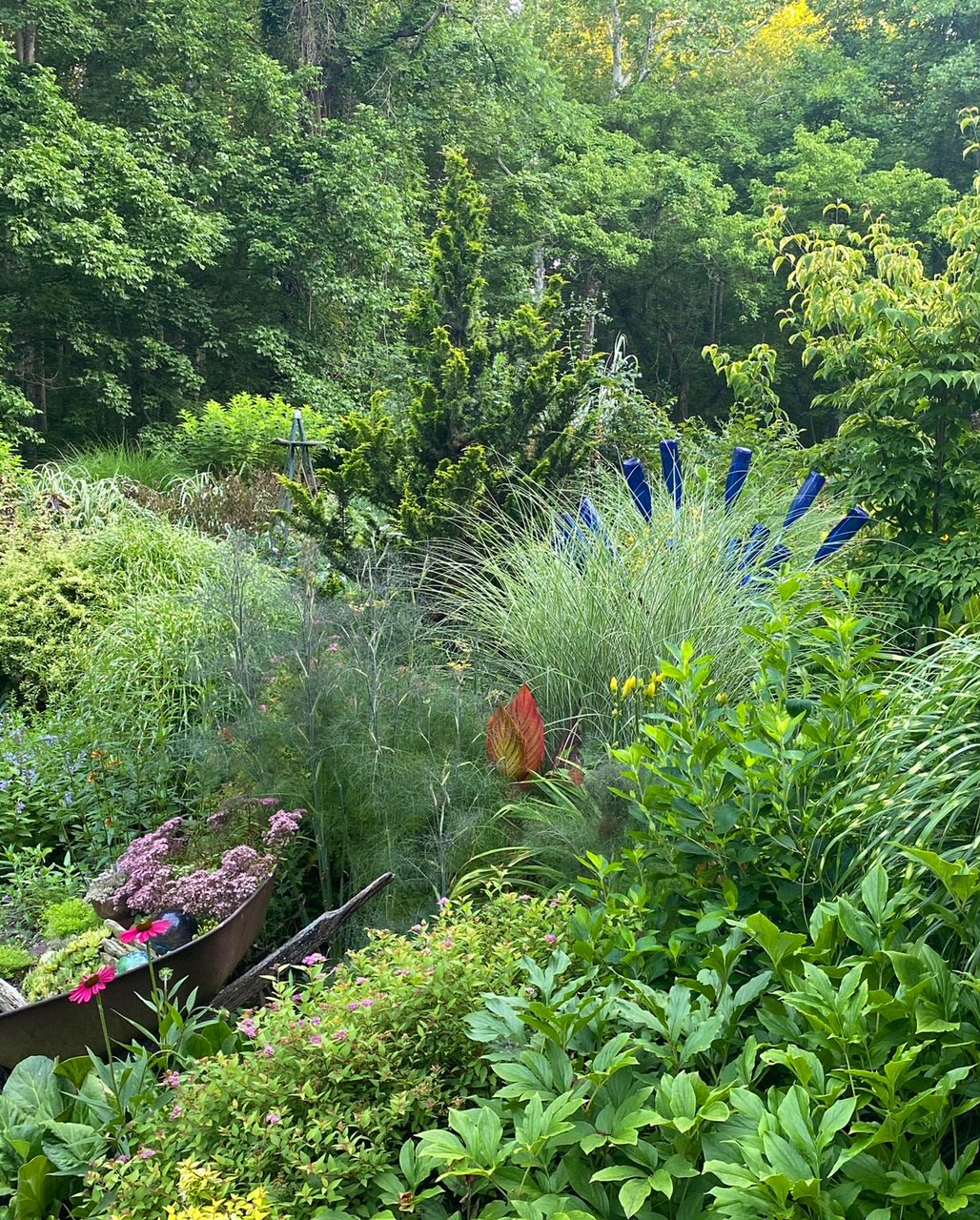 I probably got docked on points for the succulent filled wheelbarrow. But it’s the solitary bottle tree that really dinged me. So gauche. I apologize for offending your sophisticated eyes.  And BTW – see the daylily buds to the right of the Tropicanna? Deer got them all the next day.

Yes, August brings us face to face on three separate occasions, two of which I have no doubt you will use to bolster your increasingly affectionate fan base by throwing me under the bus when we speak together. But I look forward to them enormously nonetheless. The Perennial Plant Association symposium in Lancaster next week is a terrific way to start the month – the difficulty I think will be in finding enough time to sit and talk with so many wonderful plantspeople in between tours and lectures and general fun.  I did tell Michael that it’s going to be very boring in order to make him sympathetic enough to water the 90° garden next week, so I’d appreciate it if you’d keep up the pretense when we all meet in Asheville at the end of the month.

Have been reading of the new introductions featured at the California Plants Trials this spring – and feeling the urge to pile in a mini-van next April and see it for myself again. I’m pretty sure COVID robbed you of the experience in 2020. Fancy a Rant Road Trip?  California gas should be up to $9 a gallon by then, so we’ll need to start saving now.  I propose we propose the idea when cooler autumn air makes the thought of anything possible — even the thought of six opinionated gardeners in a mini-van careening up the coast of California.

P.S. I too have one of those crazy gaps filled with all manner of old wire, fence posts, and other ugly bits and pieces (including a wagon), to stop deer wandering into the [otherwise] fenced kitchen garden.  So many things to do, so little time.