Grinding Out Another Horror Show Project in, Turns Out, My “Yew” Garden

Wow! What an amazing turn your life has taken. It’s almost like you won the lottery or maybe sold your soul or something. Benefitting from the poor fortune of, turns out, loyal readers who had to cancel their dream trip, you were able to stow off  to the Great Dixter Spring Symposium and chum it up with that one British gardener everybody’s always talking about suddenly. Can never remember the dude’s name. Garth something maybe?  Then jetting off to Seattle to speak at some high class symposium. Again, I can’t remember the name but I’m sure everybody there was blown away by your wit, wisdom, and good looks. Then a jaunt off to Maine. I don’t know why. A vacation? A lobster dinner? Finally, that fun podcast you did with what’s her name. Leslie Harris? Damn. I remember when your life was nowhere near so charmed!

But I loved your illustrative description of Heathrow’s newest concourse. It’s been a very long time since I’ve been there. It sounds like the fancy duty free shops you described are different now than the ones I remember. Just as snooty, but different. I don’t recall daydreaming about slamming a fancy bottle of perfume on the counter and demanding it be shipped to America immediately. I do remember visiting one or two of them and asking how much this or that cost. After gasping at the price, I asked if they could point me in the direction of the People Express gate. That was fun, as reveling in one’s own humiliation can sometimes be. 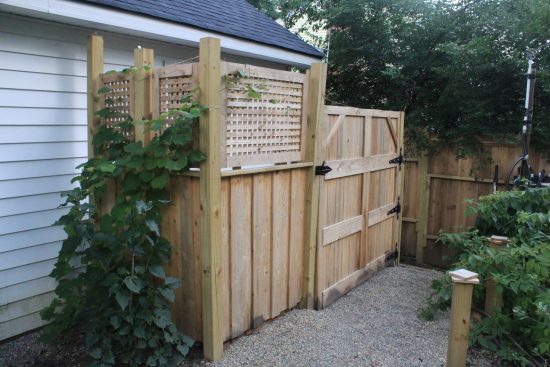 Project From Hell 2022, Phase I, mostly finished, enclosed the pool pump and gave me a place to grow a catawba grape in honor of Cincinnati’s glorious but brief wine-making history.

It’s good that amongst all the joy and fun you had to share in your last two letters that you never asked how I was doing because, to tell you the truth Marianne, I’ve been suffering. Things have been hard this summer. Yet another soul sapping project, ala last year. It’s actually a continuation of that one and week after week after week it has made me question every decision I’ve ever made in my life. Anything in my past that might have led me to this project this summer, anything, whether it was choosing a college to picking a career to naming a kid to choosing grape bubblegum when I was five instead of cherry, if any one thing somehow led me to a single minute of this hellhole of a project, then let it be damned. Besides the project, the usual. Too much rain. Then too little. Lately, unbearable, oppressive heat. Finally, the coup de grace, for the first time in my adult backyard gardening life, significant deer and rabbit damage.

I can hear the collective phony sympathy of the entire gardening universe over that last complaint, but, dammit, I have a fence. Sure, it’s just a 4’ chain link fence, but I have planted both my side and my neighbor’s sides with all kinds of trees, shrubs, and vines and for twenty plus years, having no clear place from which to take off and no clear place to land, has been enough to deter deer from taking the leap into my backyard. But this year, they found a way in. 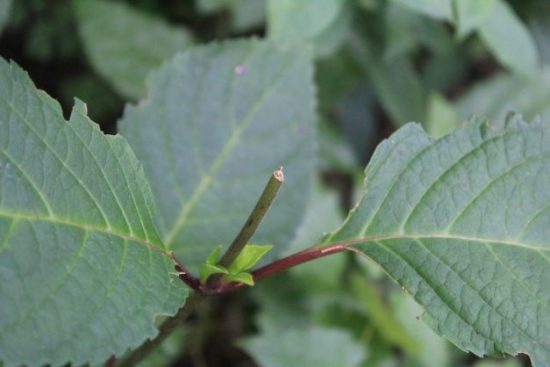 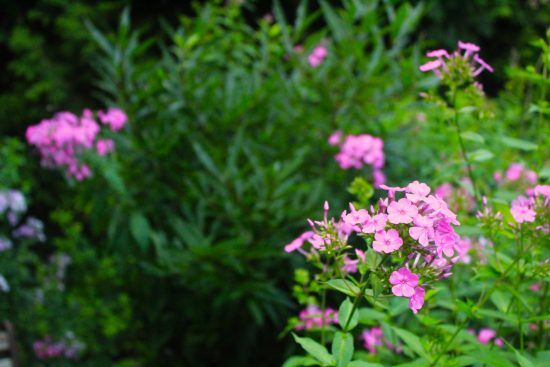 The deer ate just the tops off of all the Phlox. But the upside is the Phlox grew out and still bloomed. Perhaps smaller inflorescences but more of them. But still, it’s more about the unmitigated gall. 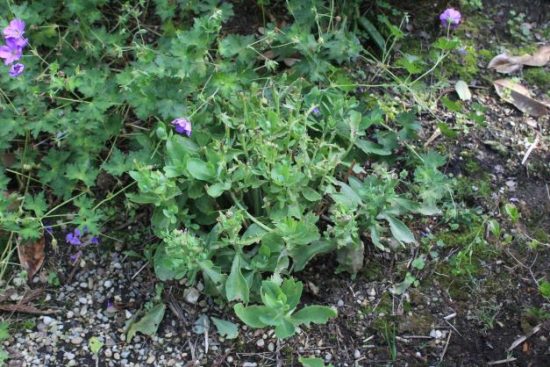 Not so optimistic about my many sedums a big, fat, horrible rabbit has been eating.

It took me two weeks to figure out how they were getting in. During this time, those bastards made nightly runs to eat the tops off a dozen or two garden phlox and a bunch of other favorite plants. And I mean that. Always favorite stuff. Never a weed or some aggressive thing I was going to hack back anyway. And I swear I wouldn’t even mind if they ate one phlox down to the ground but, nope, just the tops off every one of them. But those filthy animals couldn’t out smart me forever. I finally figured out how they were getting in. It was through my project! It created a long, narrow alleyway along the side of my garage which had been closed off but no longer was. The fact that my death march of a project practically gave deer red carpet entry into my backyard buffet just added insult to injury.

So I closed off their little ingress by booby trapping it. I crisscrossed a pair of 2 x 4s, against which I tenuously balanced other boards and rakes and some metal pipes and other stuff that would fall easily and make a lot of noise if it did. Finally, and this was pure genius, I gingerly balanced a shovel between the top of this barricade and a weak branch in my neighbor’s honeysuckle so that the least sort of disturbance would cause it to fall on the deer’s head. Every morning, I went out hoping to see evidence this, but, alas, no. But, no more browse damage either, so I guess I should find consolation in that. 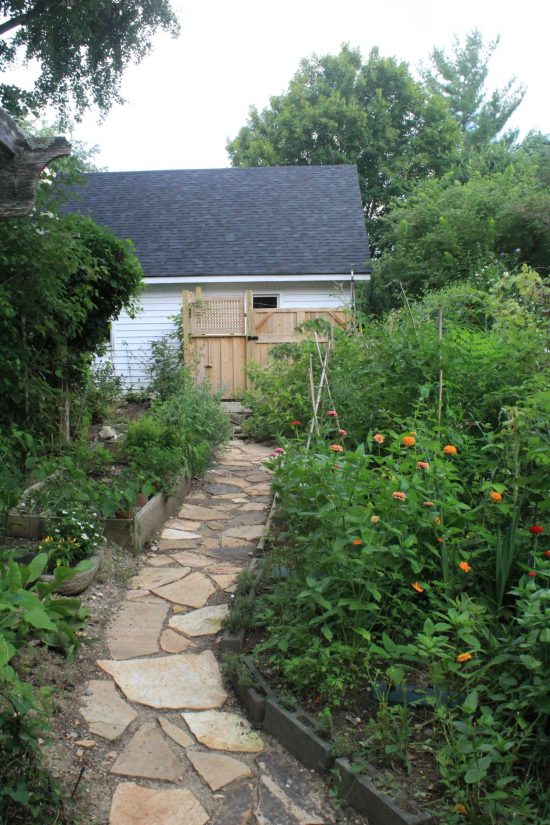 Part of why the project is so horrible is because much of the point of it is to take space that was already too full of  junk and make it capable of  holding even more junk. Junk had to be move out of the way, only to be in the way of the next task, and then the next. A leftover old pile of flagstone had to go somewhere. Wound up becoming the path through my veggie garden, making it look very Tuscan, in a low-income, unthought out sort of way. 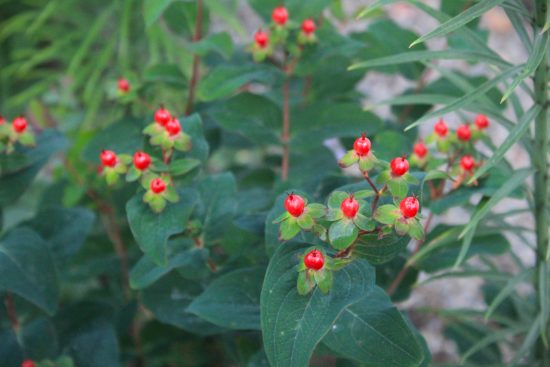 Hypericum Hyperberries Maroon went in next to the catawba grape and is just about the most beautiful plant I’ve ever seen.

And for any reader who wants to get all judgmental and express outrage that I set a trap with the hopes that a shovel would fall on a deer’s head, don’t even bother. I’ve had dozens of shovels fall on my head and I’m still alive. I got over it. I guess there’s the offhand chance that one of those incidents could have been the thing in my life that set my set my fate on a course leading to my current hellhole project, but, even if that’s the case, it would not have diminished my joy one iota if I’d gone out one morning to find my shovel on the ground and a deer staggering around the yard like Mohammed Ali had just clocked it. 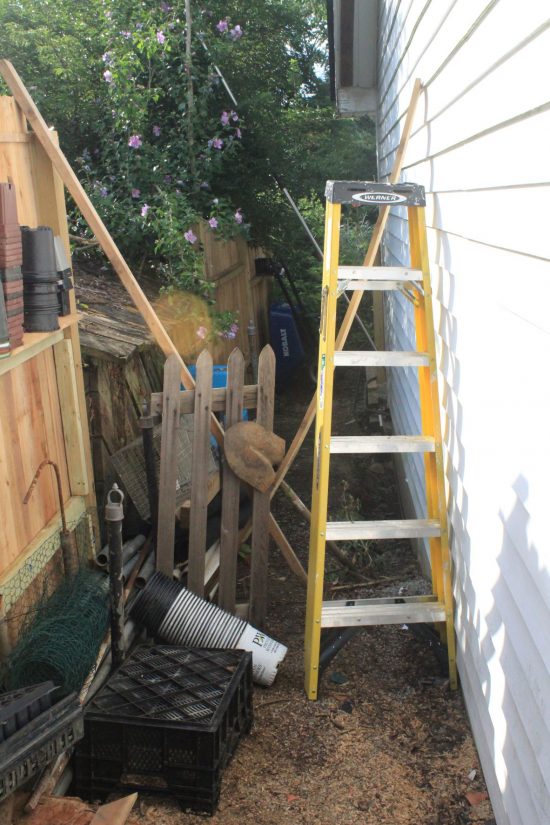 Phase II of the project. Nowhere near finished. This is the alleyway the deer used to waltz right into my backyard. Some elements of my booby trap remain in evidence.

Of course, the pressure of finishing this project quickly and then turning my attention on an increasingly unruly garden is high, as I have some very important visitors coming in late August. One of these folks happens to be you, when you’ll be in town to speak at the Cincinnati Zoo & Botanical Garden’s Plant Trials Day. In fact, we’ll be seeing a lot of each other over the next month. We’re both speaking at the Speaking of Gardening symposium in Ashville, NC. Prior to that, we’ll be hanging out at the Perennial Plant Association’s conference in Pennsylvania. At all these events, I will try very hard not to kill your joy by talking about myself too much. 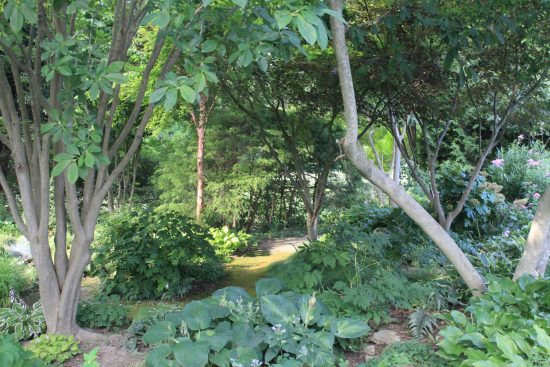 From certain angles, at ample distance, and in certain light, the backyard is okay. Way too many weeds. More than I can ever remember and I’ll get to them. In a hundred years when the project is finally over.

Must report one very fun thing. One of our readers was inspired to send me a gift! Because of my Grexit article forever ago, your response, and now this Dear Gardener series of letters, a woman in Lexington, KY sent me a copy of James Bartholomew’s charming little book, Yew & Non-Yew. Very British, it laughs at the contrast between the uppity gardener and the lowly one, “Yew” being snooty. “Non-Yew” being base. Was absolutely sure I would land firmly on the “Non-Yew” side of the ledger, but nope. I’m about as “Yew” as one can get. Really? It’s enough to start me reassessing all my values if I weren’t already doing it already.