Recently a few of us, all members of the Hardy Plant Society Monmouthshire Group, got together over a good supper to enjoy each other’s company and to discuss what we think about those plants usually described as thugs.

There were some interesting thoughts. And someone brought a bunch of thugs (well, pieces of) with them, which provided some useful illustration.

There was obviously much complaint about several well known plants, some of which spread by seed and some by vigorous root systems. Some maybe by both….. 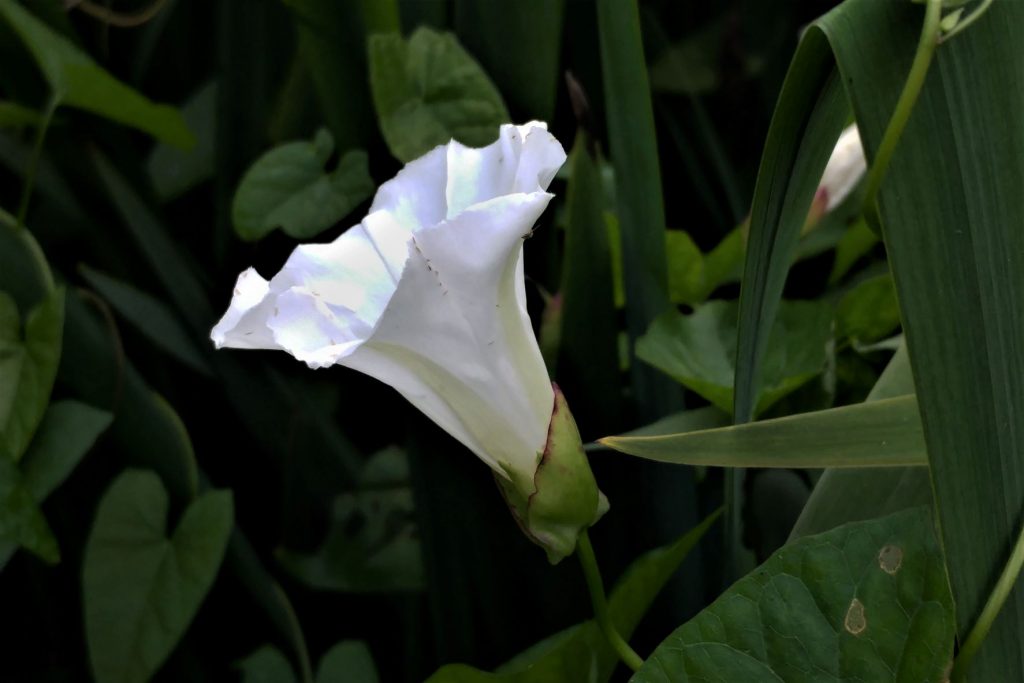 A beautiful thug: Convolvulus arvensis, better known as bindweed. My experience of it: here

I’m not sure which were considered worst (though if you’re sharp with a seeder you might cut the dying flowers off quick). There seemed to be agreement that thugs are seductive if you’re just starting, with lots of empty space. And then that one definition of a thug is a plant you can’t subsequently get rid of, whether it’s spread and tangled into everything or staying stubbornly put with very insistent roots.

It was clear too that different locations and garden types can make a critical difference to what is thuggish. Some people had gardened in different parts of the country and struggled with different problems from those of us in Wales. And some people had attempted to grow some thugs without success.

It seems for example that some people can luxuriate in valerian or a whole field of wild orchids (!) and some can have none of these at all. And it may be in the nature of some thugs to be hard to get going? 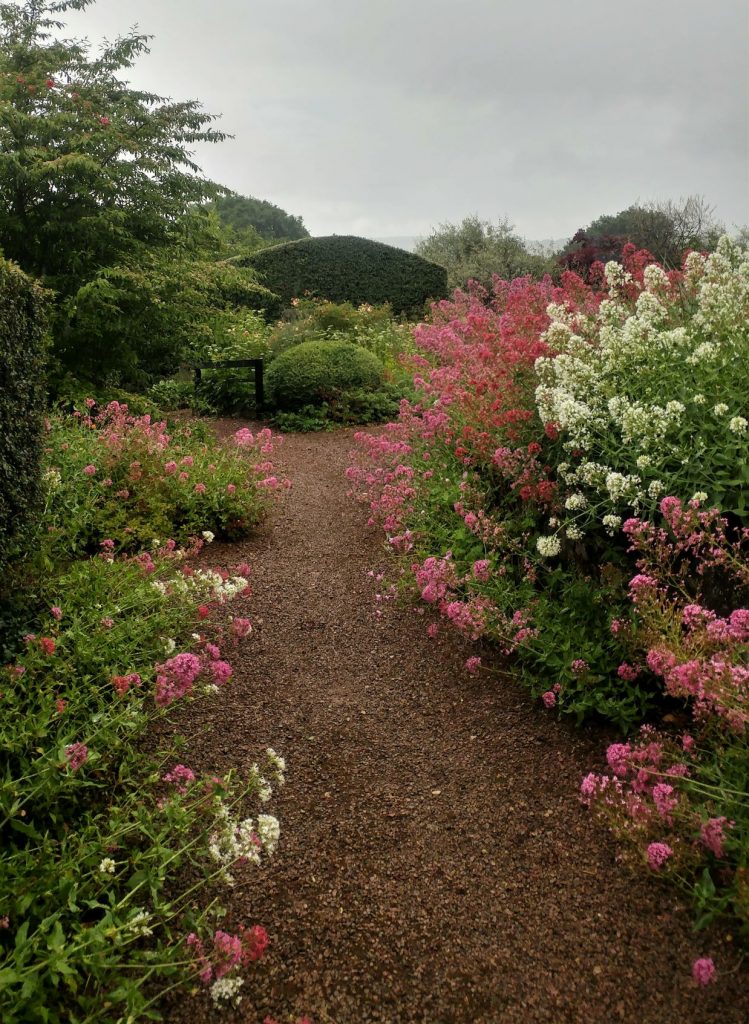 Water thugs were identified as especially hard to get rid of and dangerous to the countryside. Which led to discussion of the particular category of thugs which damage the local ecology. We are not like the USA, where immigrant plants are frowned on, since the vast majority of all our plants in the UK are immigrants. But some plants are mad invaders, swamping the local flora and causing real trouble. Japanese knotweed is one notorious one. We wondered how familiar the general public are with which plants should never be propagated, given or sold, and absolutely avoided or destroyed where possible.

But I didn’t get my own question about thugs answered.

I started the garden at Veddw mostly growing, from whatever seed I could obtain, plants which were recommended in Graham Stuart Thomas’s ‘Plants for Ground Cover.’

And it’s clear that many of the thugs people hate started life like that – as ground cover.

I think my need to cover two acres of ornamental garden with desirable if thuggish plants led to my developing a particular style or aesthetic, which gives me an unusual love of thugs/ground cover.

I once published a discussion on thinkingardens by Thomas Rainer and Noel Kingsbury termed ‘Mingle or Clump’  It was one of the most popular pieces ever. So perhaps there are more people mingling their plants than I imagine. (Meet Thomas here!) 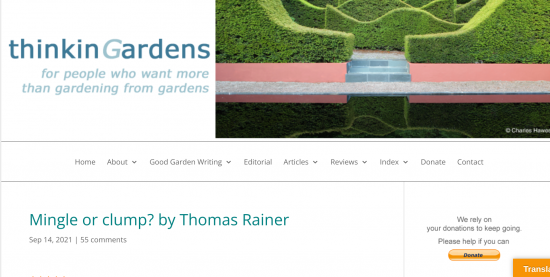 In the UK I believe people mostly acquire gardens along with the houses they buy, then they modify that existing garden. They buy or are given more plants and have to find places to squeeze the new ones in amongst the old. Thuggish plants get in the way of adding new plants and may even smother them before they can get their feet in the ground. So thugs are much resented. 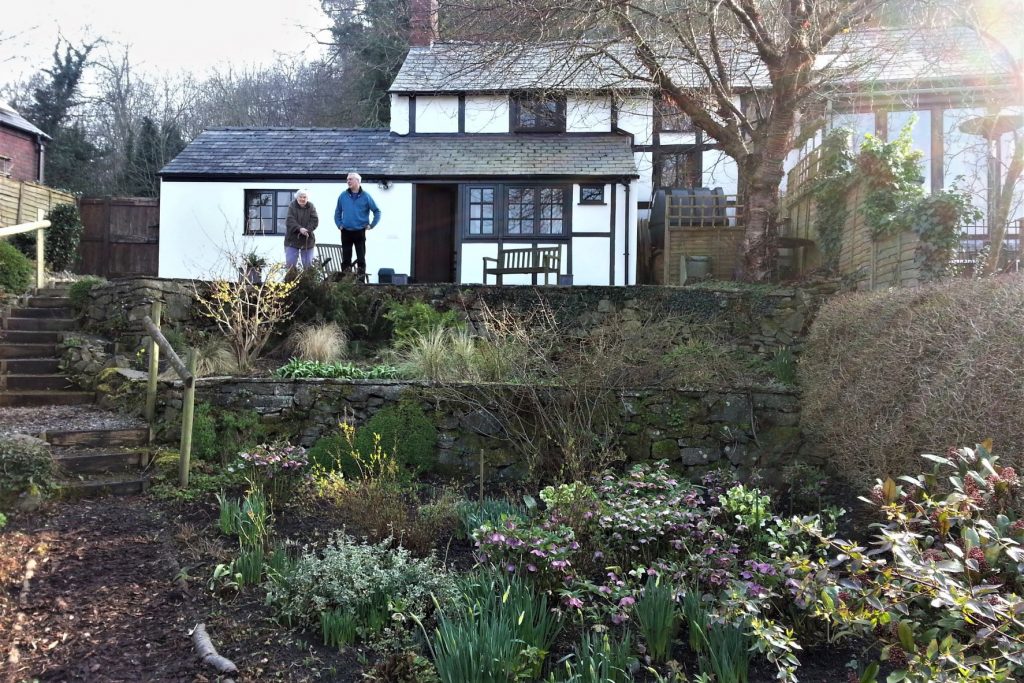 An inherited garden, in this case wonderfully full of hellebores.

And I think the traditional English herbaceous border, which is a popular model, has plants dotted down the border, perhaps repeated but identifiably singular – clumped – sometimes even with bare soil around them so that a hoe can keep any thuggy weeds at bay. This also tends to go with one of my pet hates – the edged lawn. 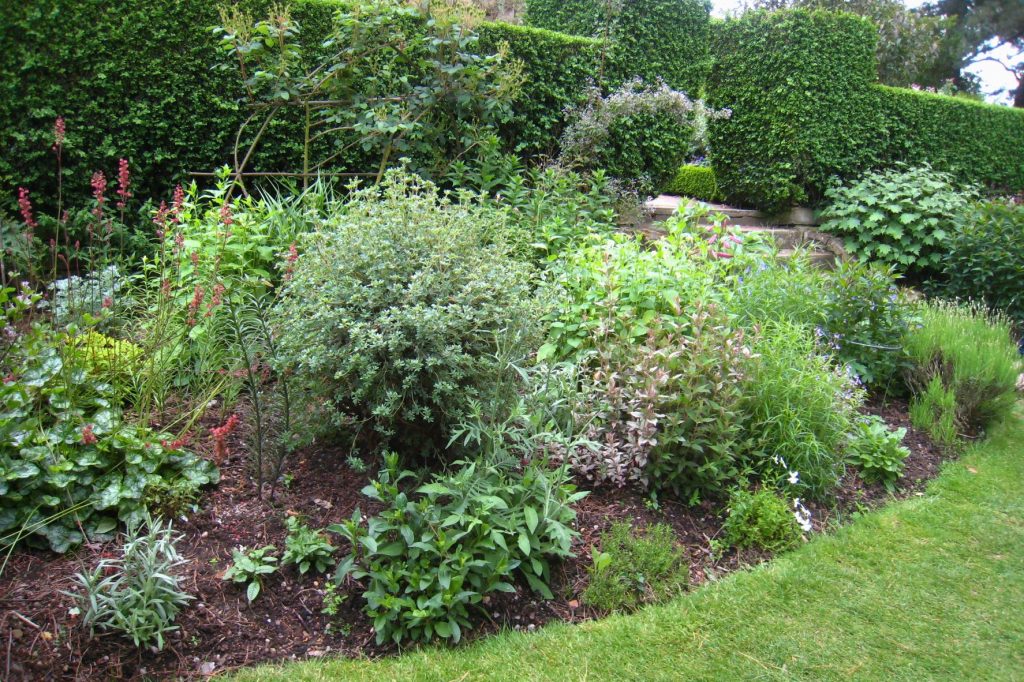 A familiar sight, the English border.

This sort of planting may emerge in summer into something like this: 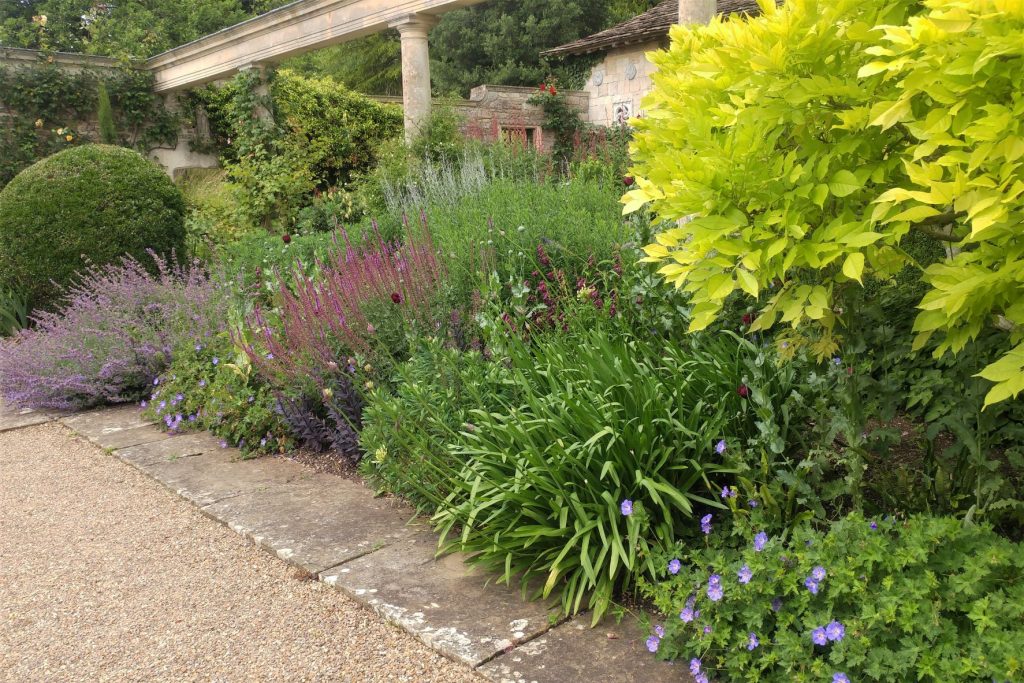 or this (both from a visit last week) 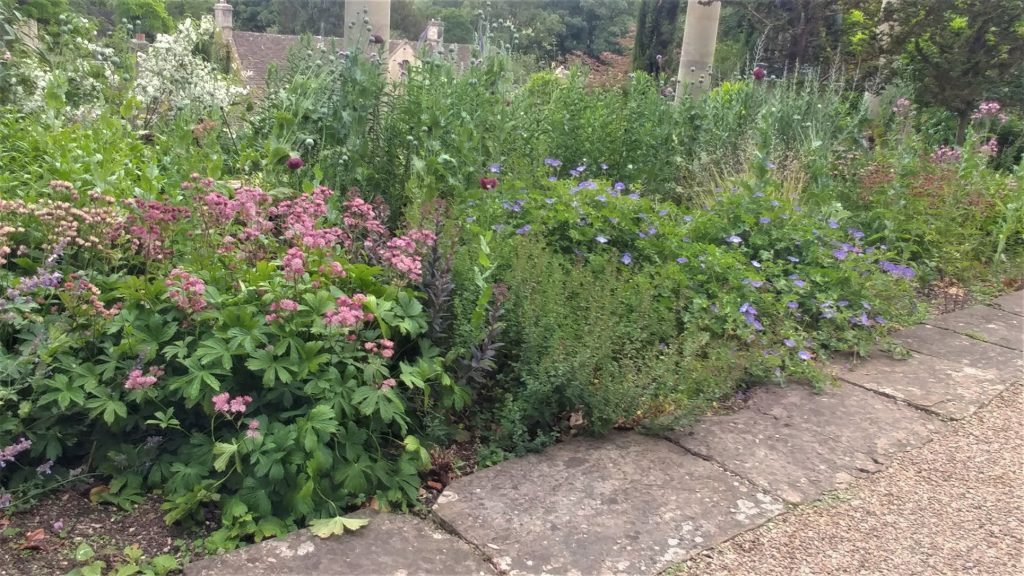 We were extraordinarily lucky to have two fields to play with and no chance of making traditional borders like the above, given the constraints on our plant purchasing and available labour.

As a result, mingling has been inevitable. Vigorous plants are put together to fight it out and the result tends to be plants happily jungled up together. And thuggish tendencies are constrained by the battle for supremacy. Persicaria campanulata, for example, will subdue ground elder. 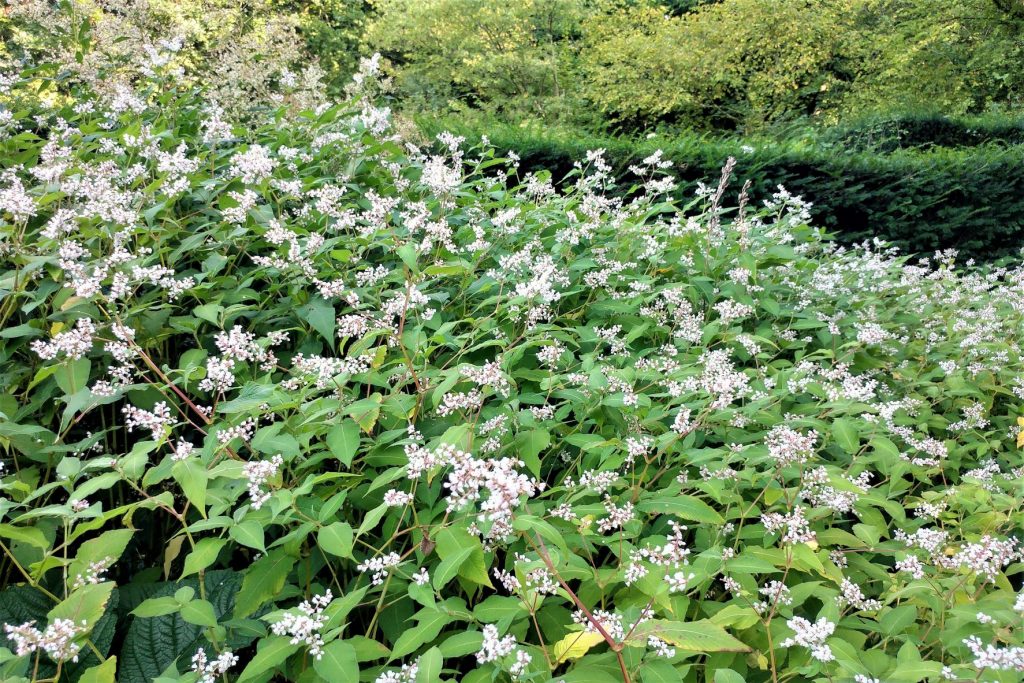 But I realised that at that supper that a love of thugs has gone further than setting thugs off together to fight it out at Veddw. I’ve exploited the thuggishness to create drama.

Like letting Leymus arenarius have a bed to itself. 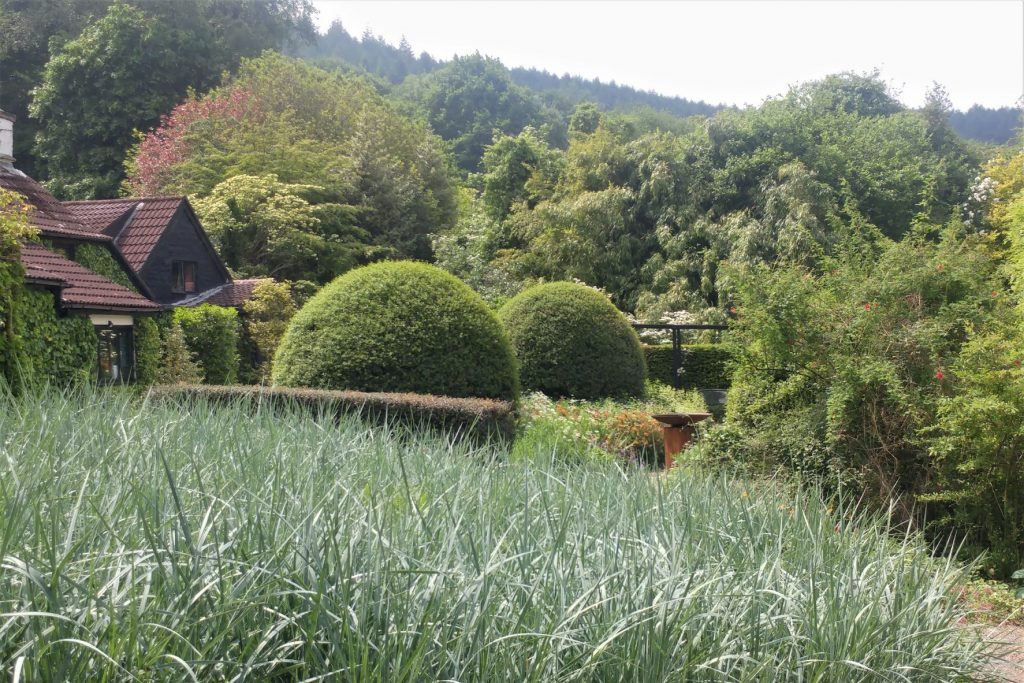 This is a huge bed of this beautiful rampant grey grass.

Or filling a whole garden with Heuchera Palace Purple, Cardoons and ferns. 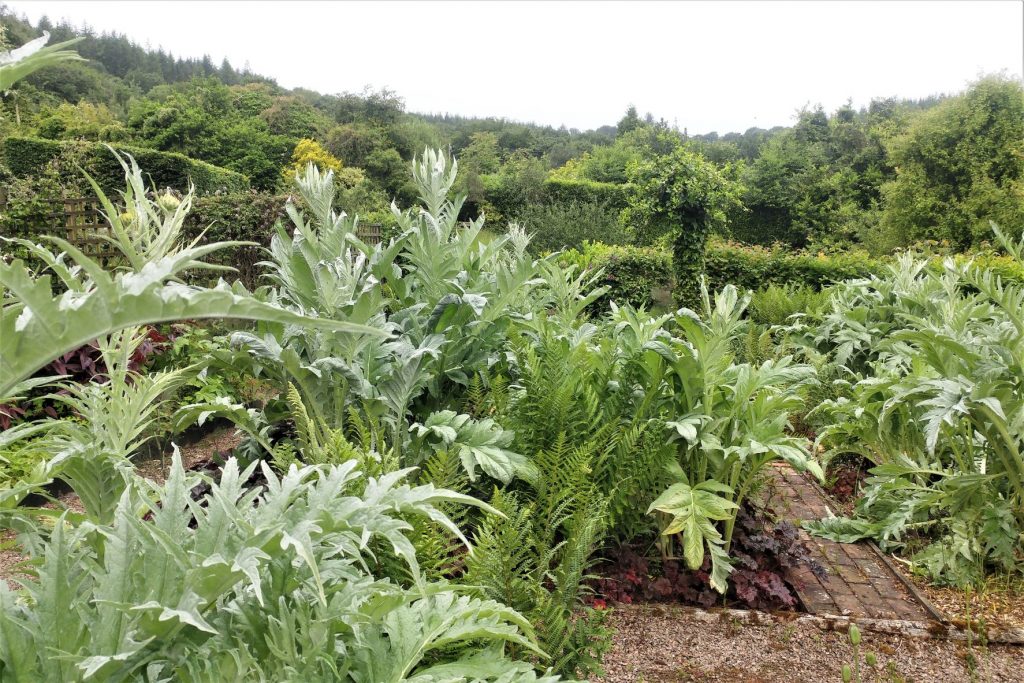 Bordering the lawn with Alchemilla Mollis and blue geraniums

No need to edge the lawn.

Or bordering the orchard with just Campanula lactiflora and Inula Magnifica 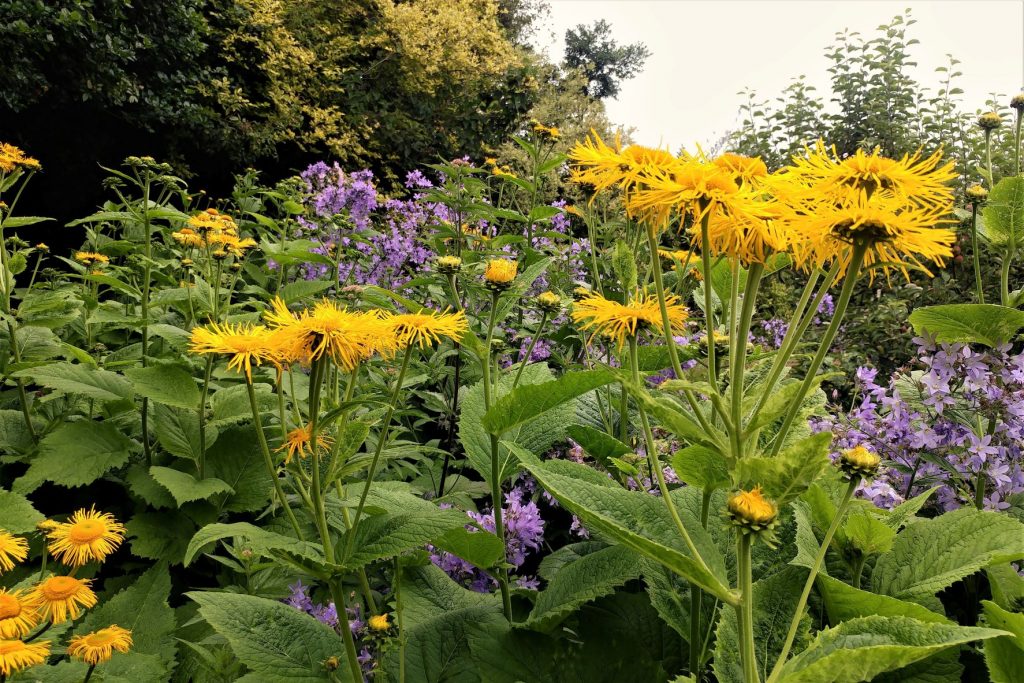 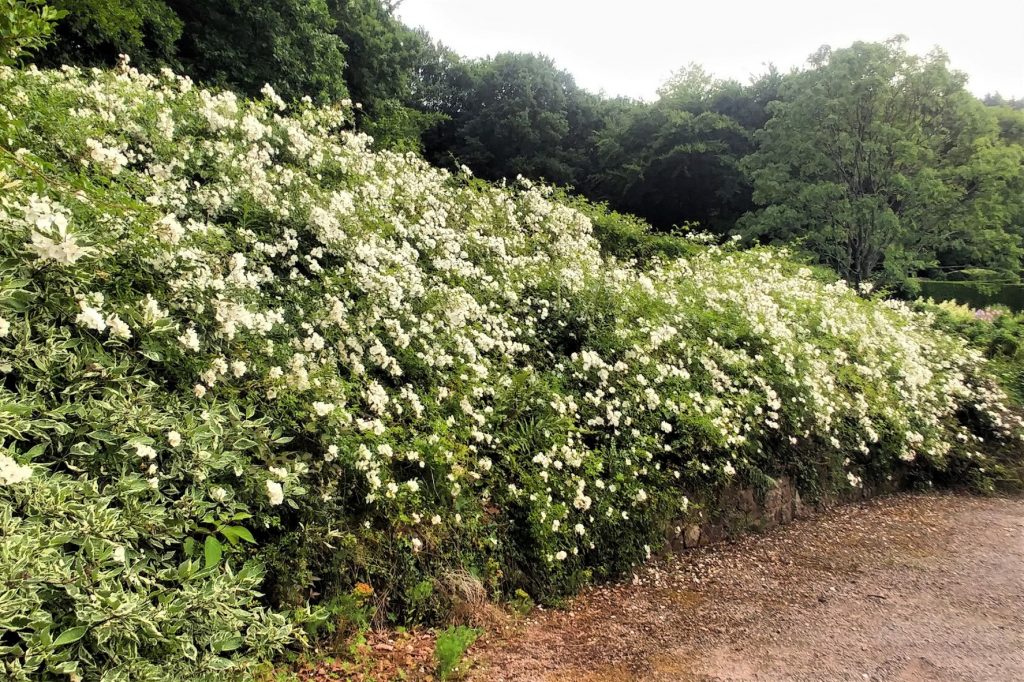 Nearly evergreen and fabulous scent when it’s doing this. 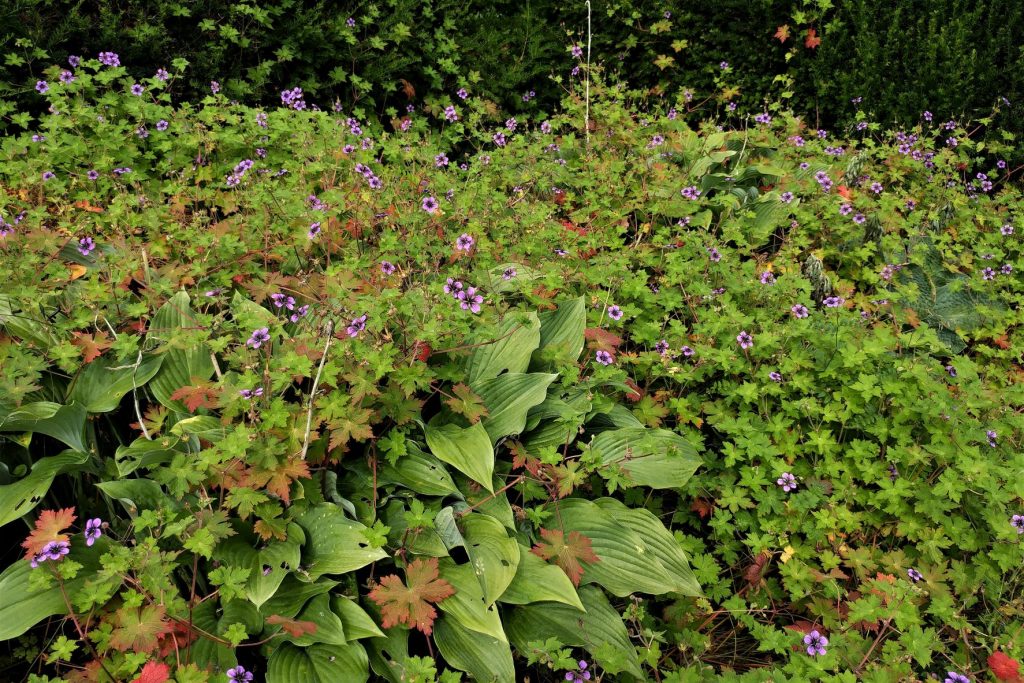 Christopher Lloyd warned against introducing this into any garden. I plant it in more places every year.

Or making a Wild Garden full of crocosmia and ‘weeds’ 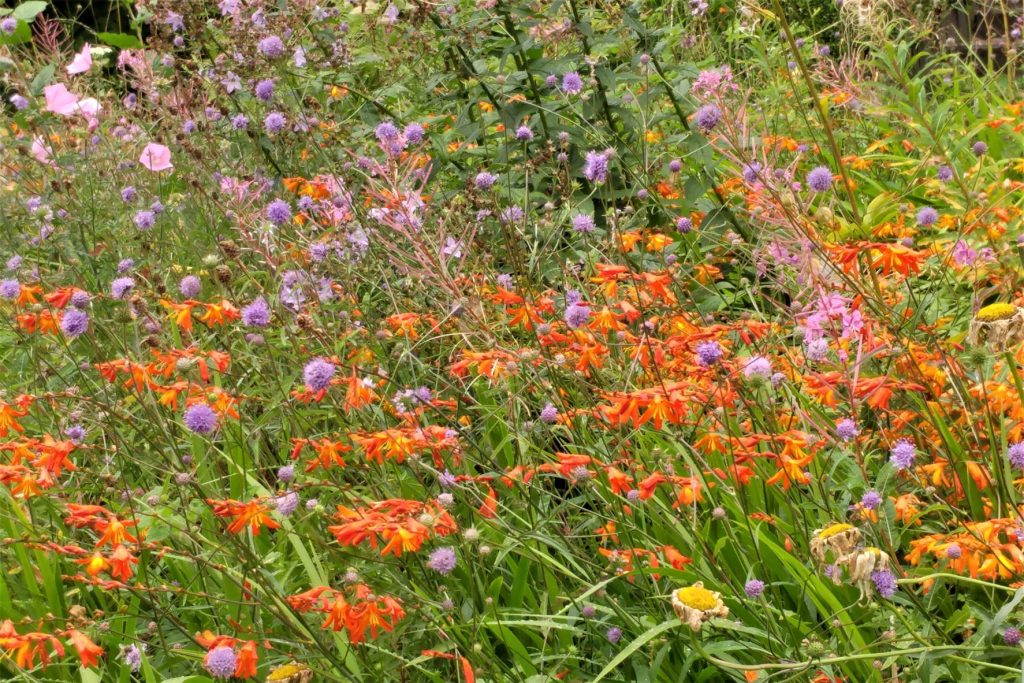 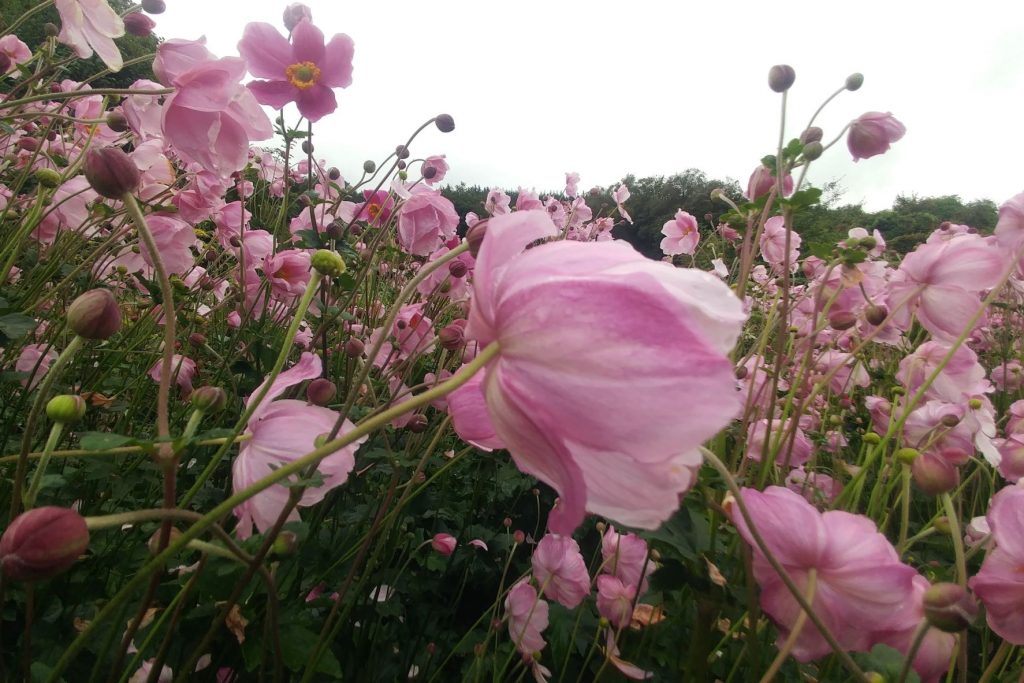 So my question was: how common is this style of gardening? I’d love to hear of other people indulging their thugs for the joy it brings. Do people do this more in America or elsewhere than we generally do in the UK?

For The Gardening Phobic

And also – I think this should be the way we encourage people to garden when they have a plot outside but hate tending it. Allowing thugs to mingle or to have their very own space is liberating and makes for easy gardening.

Yet we teach people to garden in the labour intensive ways we’ve all originally been taught. It’s a bit cruel and I suggest we need to rethink this.

Perhaps the wisest thing anyone said that night over supper was that the real nightmare plants are not really the thugs at all, but rather the precious plants that demand so much care and attention?

PS Too late! I think I need to rewrite the piece – too many people are reporting plants being difficult when my point is that they work brilliantly for us when we let them and plan for them to do that. Doh! Sorry.

Some of my favourite (British) thugs:

with its hybrids Stahl Rose 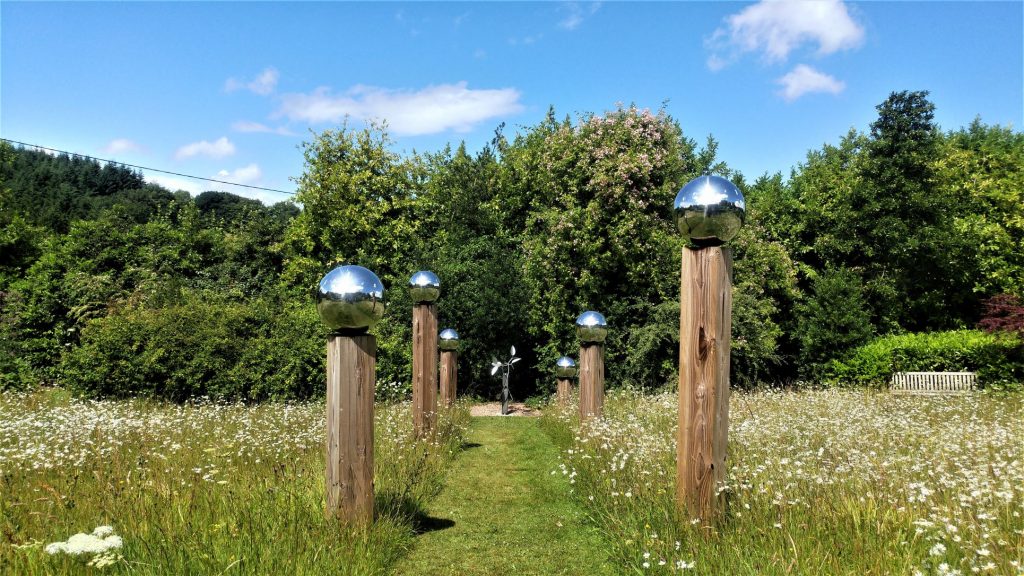