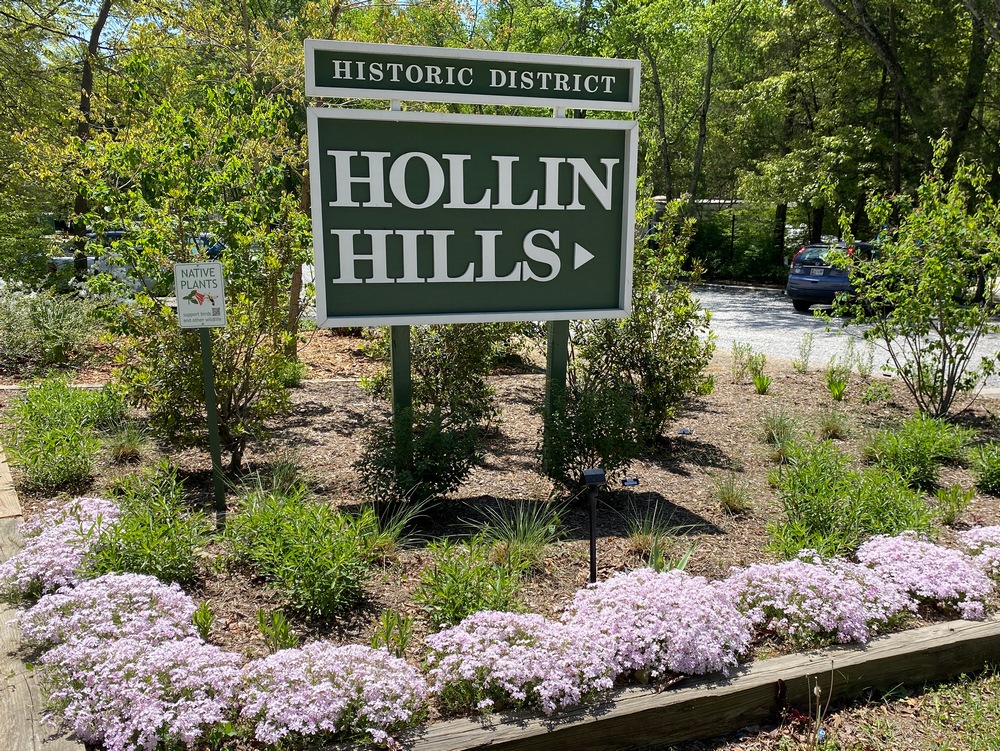 Just 10 miles south of D.C. in Alexandria, Va. is Hollin Hills, a 450-home community famous for its Mid-Century Modern houses. From its website:

Winner of many design awards, Hollin Hills is considered one of the most beautifully-designed and well-preserved modernist communities in the United States. Built between 1946 and 1971, it was the brainchild of developer Robert Davenport and architect Charles Goodman.

As architecture critic Michael Sorkin once put it, “Hollin Hills is one of the truly happy experiments in modernity … the kind of community so many modernists dreamed of, a beautiful place of social activism, love of nature, and potluck picnics.”

Homes are in a variety of approved designs (with many allowed variations) and changes must be approved by its Design Review Committee.  The result is an thoughtfully preserved historic community.

But here’s why the landscape is pretty remarkable, too.

From the beginning, Davenport and Goodman agreed that preservation of the natural landscape and site contours was paramount in both road layout and house siting. fences or other barriers.

Homes are carefully sited to exploit the wooded, rolling character of the land. In placing each house on its large (one-third to one-half acre) lot, careful consideration is given to solar orientation, the necessity for maximum privacy among neighboring houses and the positioning of the house to afford its owners a view as well as full landscaping and recreational use of their lot. Provision is made for future additional structures such as breezeways, carports, workshops and rooms for living.”

Landscaping was considered essential in maintaining the overall environmental character of the community. Initially, each house was sold with an individual landscape plan for an additional $100, which included a consultation with a landscape architect. After the untimely death of its first landscape architect, the internationally known Dan Kiley took that job for some years.

The original landscape designer envisioned a seamless merger of neighboring properties. “I have tried to tie one lot into the other [to] make the community look as if there were no individual lots, but a beautiful park,” he said.

Well! Readers may remember my rant with a video showing my many attempts to privacy and screening of bad views despite my co-op’s original vision of park-like openness. Hollin Hills residents manage to still achieve privacy because their generous lot sizes allow large plants to do the job.

What’s surprising to me is the preservation of the no-fence rule, despite dog-owners’ appeals for its removal (I imagine). 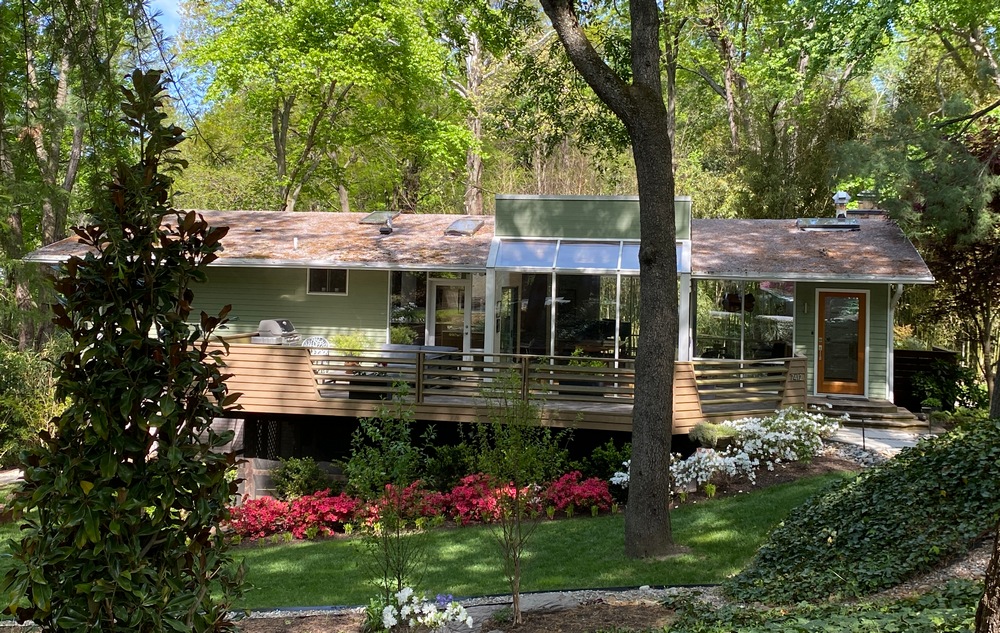 I discovered Hollin Hills thanks to a childhood friend who lives just blocks away. After one walk-through I asked to come back in the spring and she arranged for me to meet two of its most avid gardeners and see their gardens.

I’m dying to see inside these homes and you’d better believe I’ll be there for the next House and Garden Tour, sometime in next year or so. 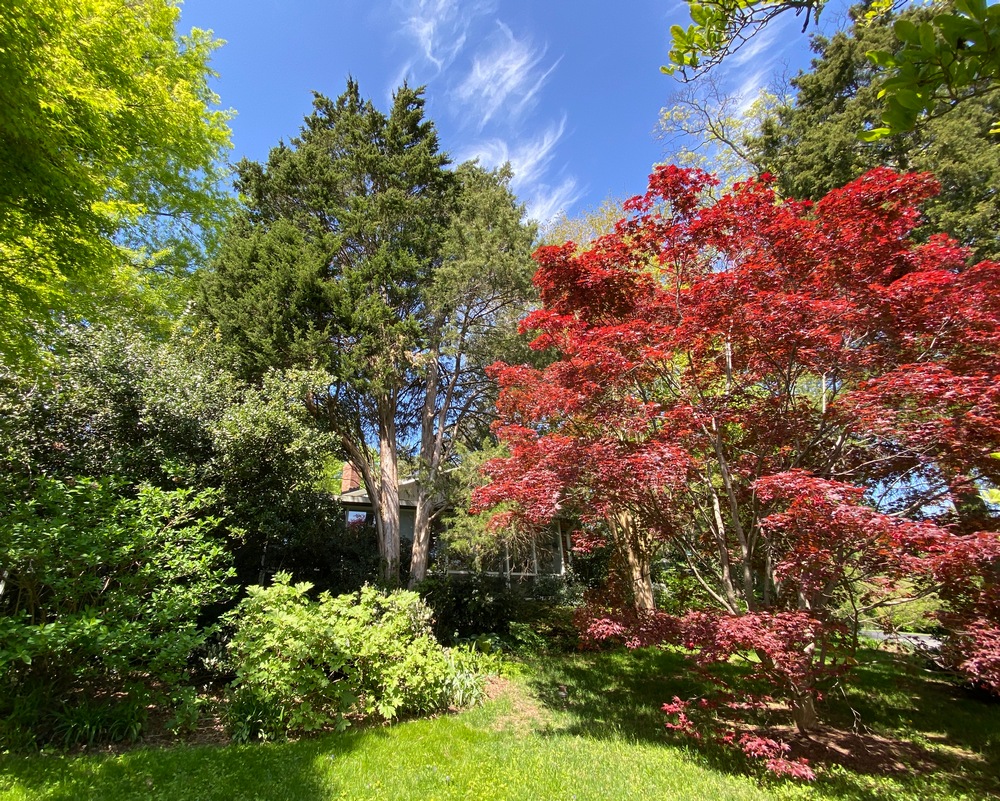 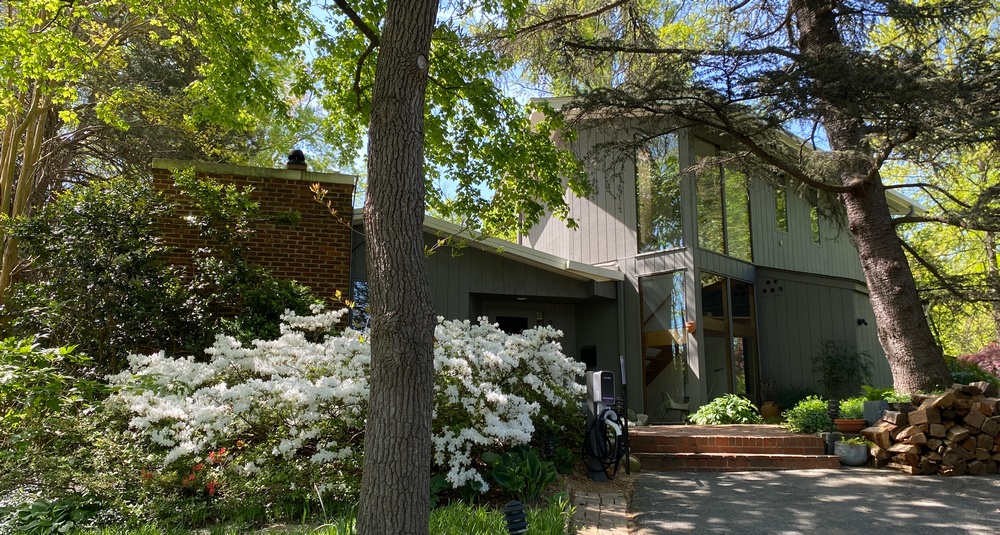 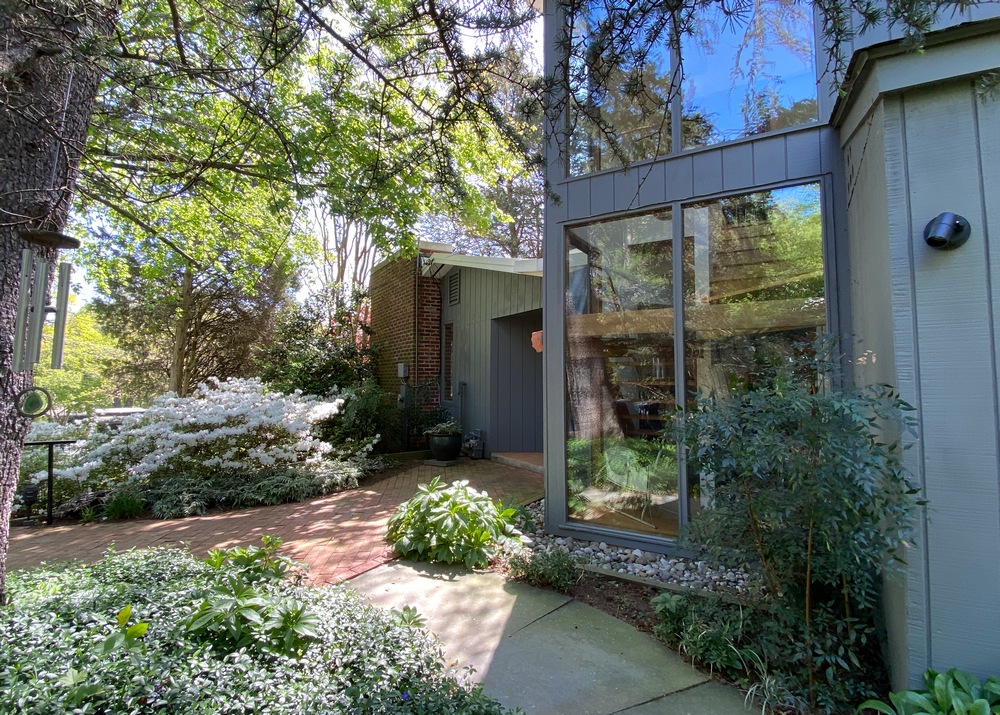 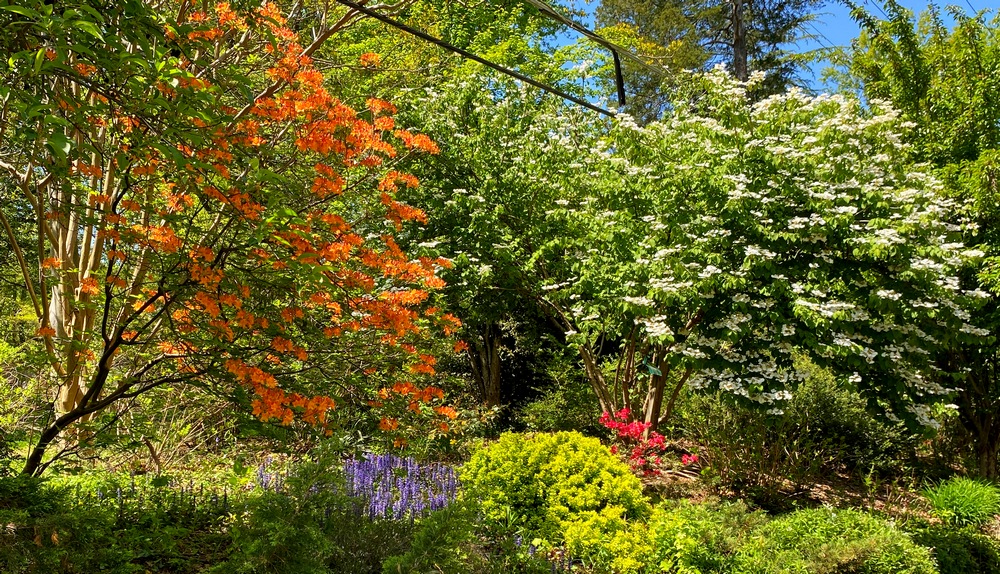 These colors! I especially love the orange of native azaleas. 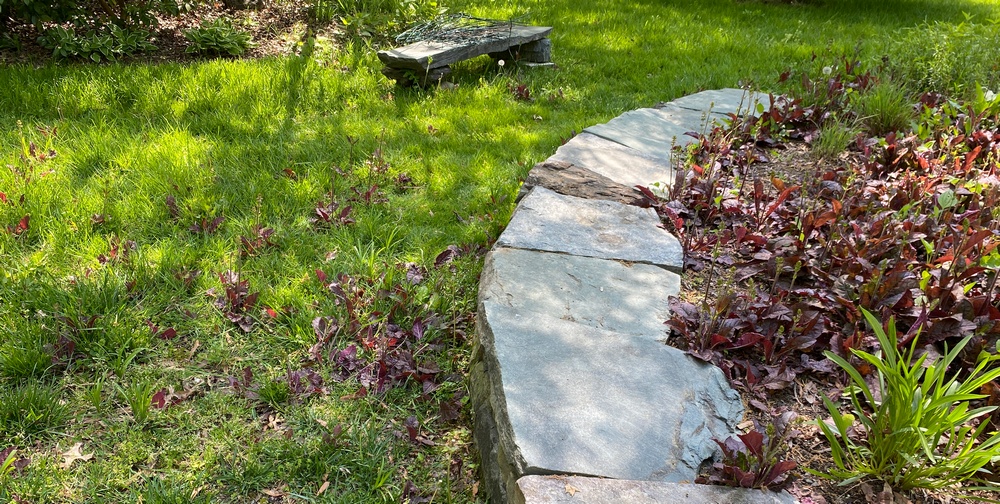 Gretchen is enthusiastically adding native plants every chance she gets, including the Lyreleaf Sage, shown above, that’s quickly spreading across her lawn. She wrote to me that “While the gold finches did enjoy the seed, I have now decided it all has to be pulled out! I’ve decided to redo that side of the garden bed with ferns and foam flower etc. It was really driving me crazy!”

Plants that drive us crazy are soooo inspiring. Time for the next experiment! 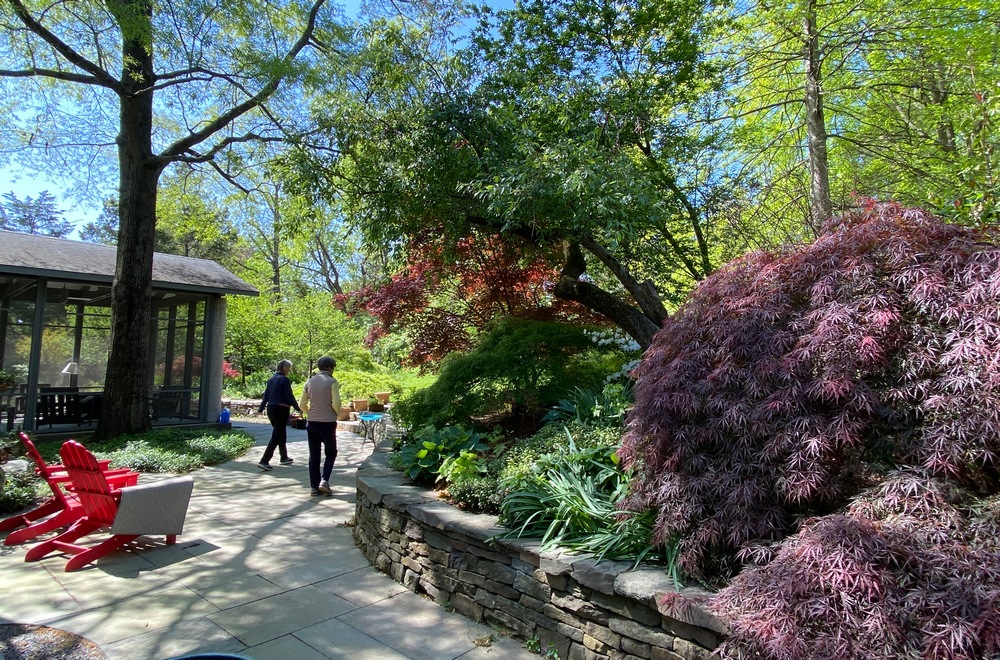 Above, Gretchen with my friend since sixth grade back in Bon Air, Virginia.

Katie has made gardening her profession. She’s currently providing garden care and development consultations, including demonstration of techniques.

Katie’s back garden is an acre and a half! Lawn care is the domain of her husband.

A cheerful Columbine next to the front door. And on the right, a Chindo viburnum, which is hardy only to Zone 7 but with global warming may begin to replace the awful Euonymus commonly used in this area for hedges. 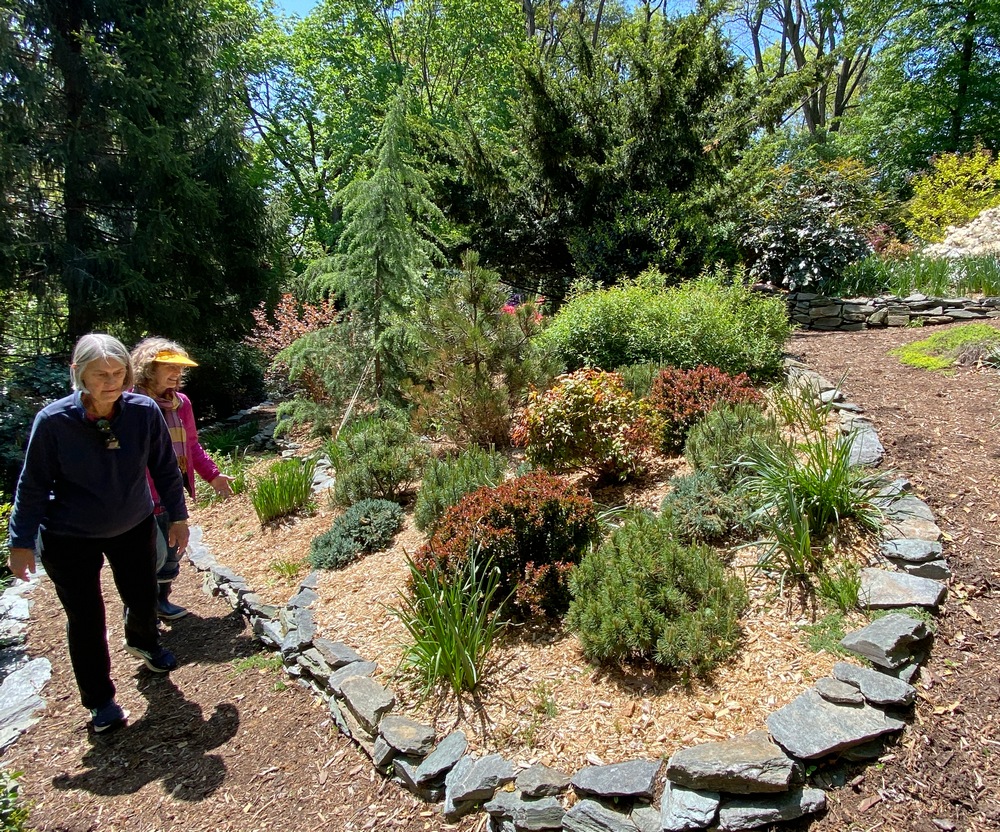 Gretchen and Katie rounding the switchback. 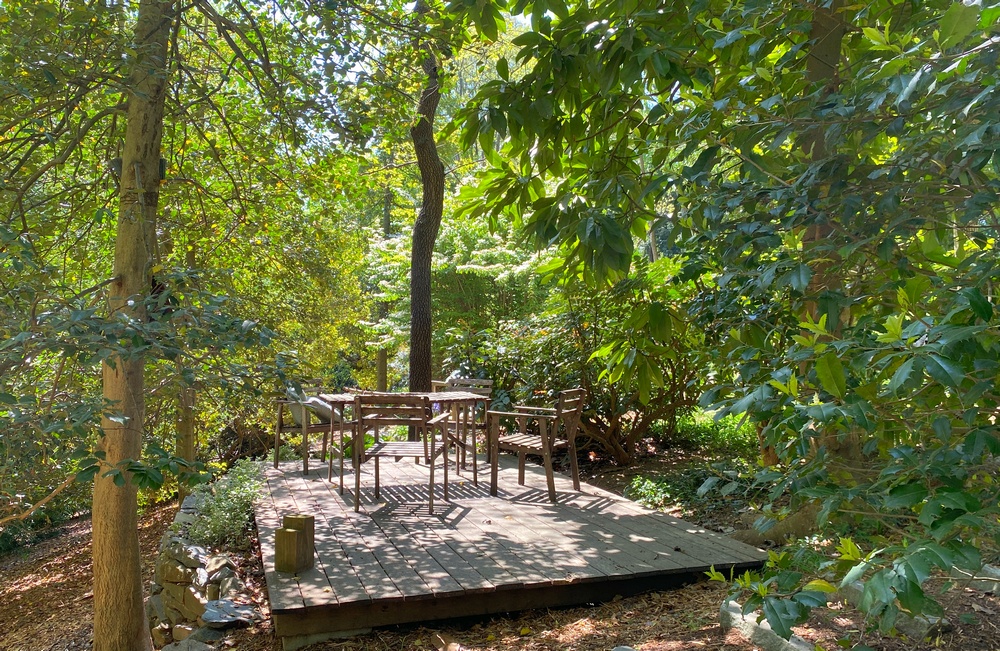 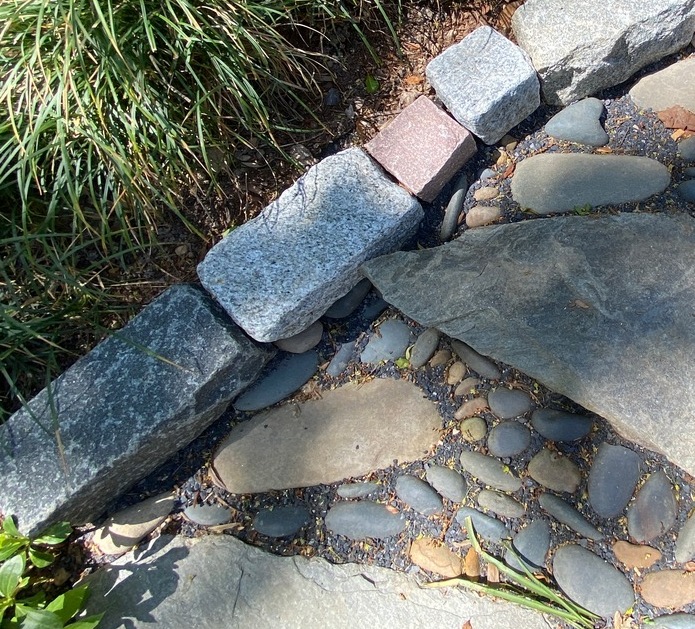 Katie’s husband Marc does all the stonework on the property, and loves creating footprints wherever he can.  Here’s just one. 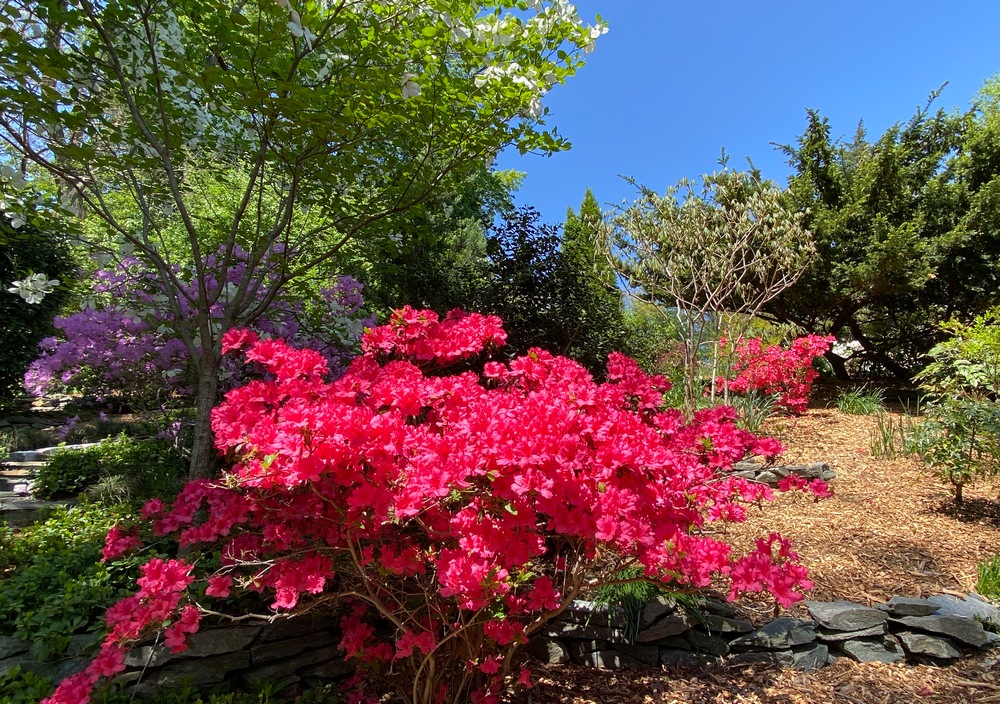 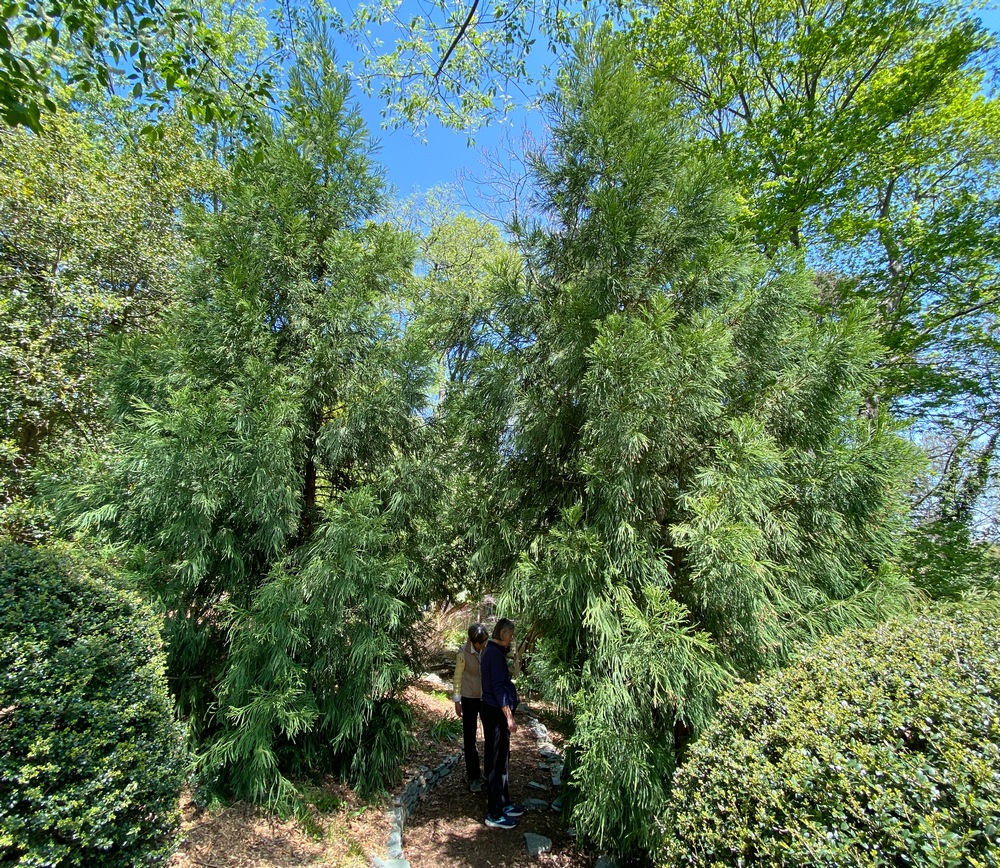 Here an archway is being created with judicious pruning of two Cryptomerias. 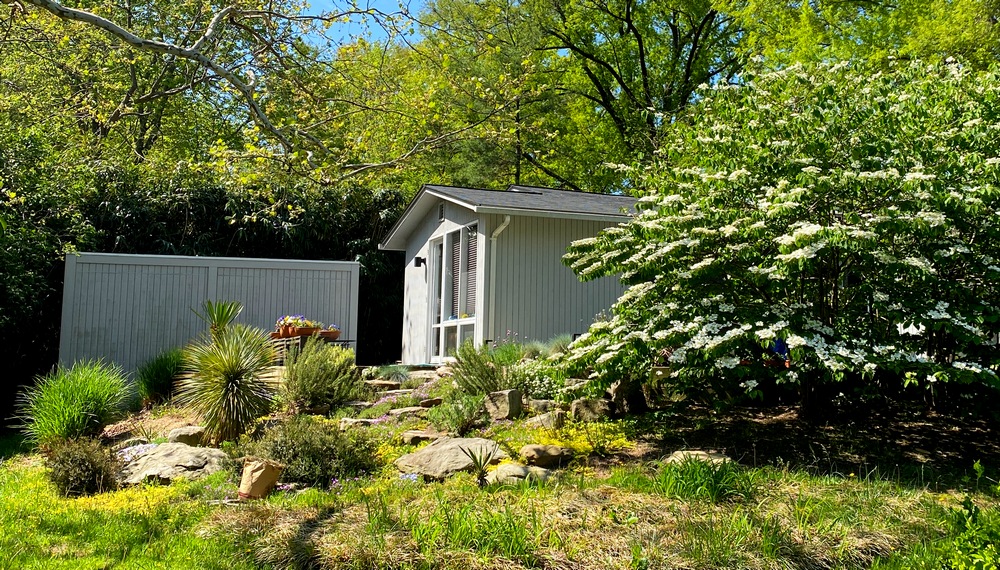 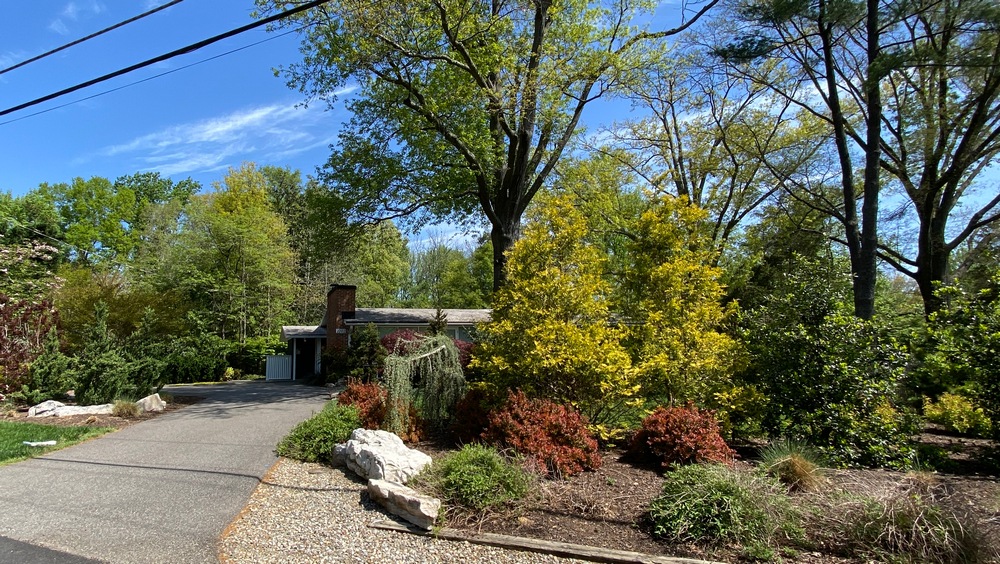 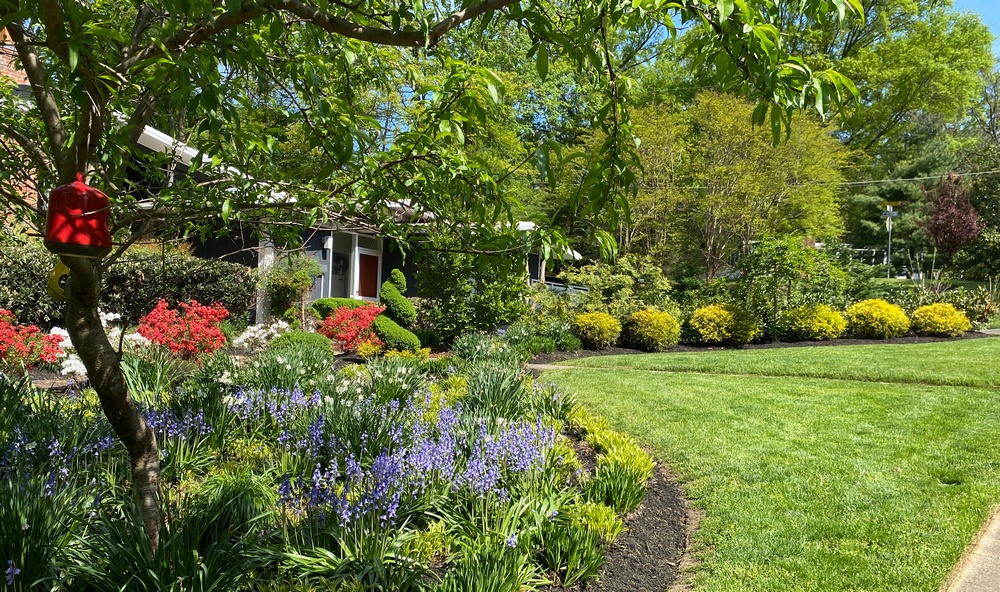 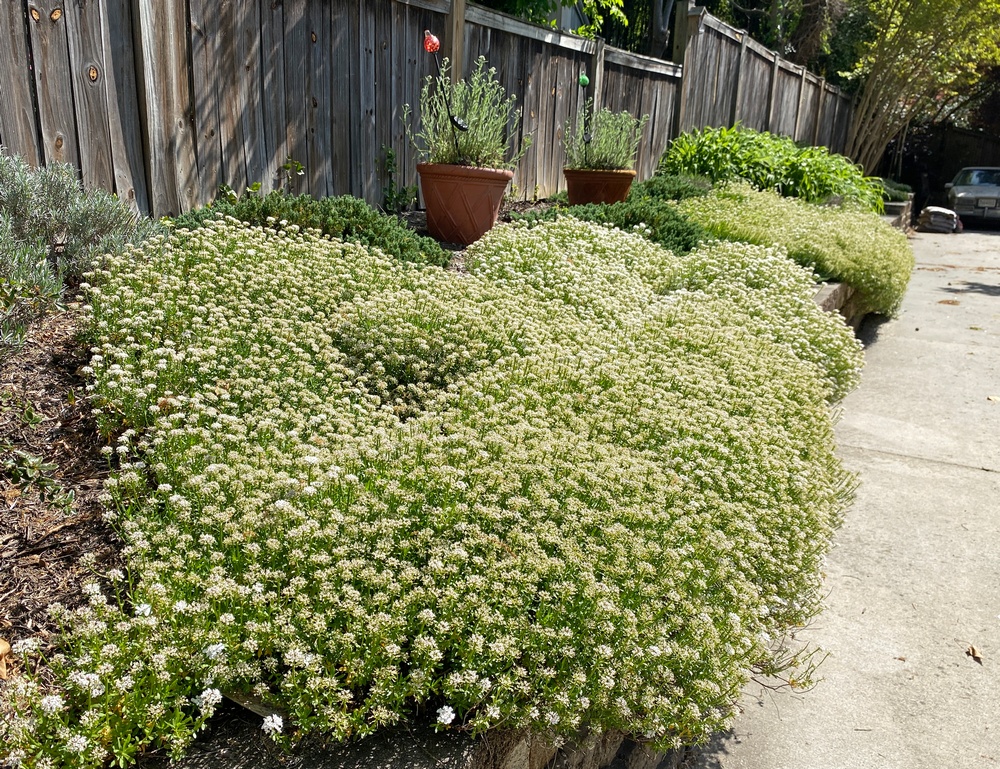 Candytuft at its best – massed and blooming. 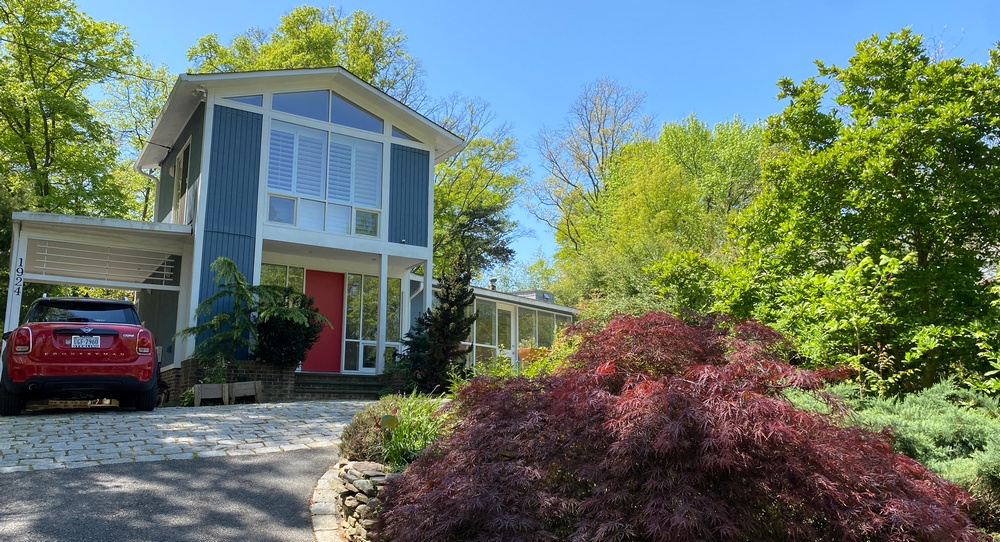