Stars and Disappointments in my 2021 Gardens

In my own very biased assessment, my home garden and all my adopted gardens were unqualified successes in 2021, so yay! But I can’t say the same for each and every plant.  So I have some praise and some griping about the stand-outs, for better and worse. 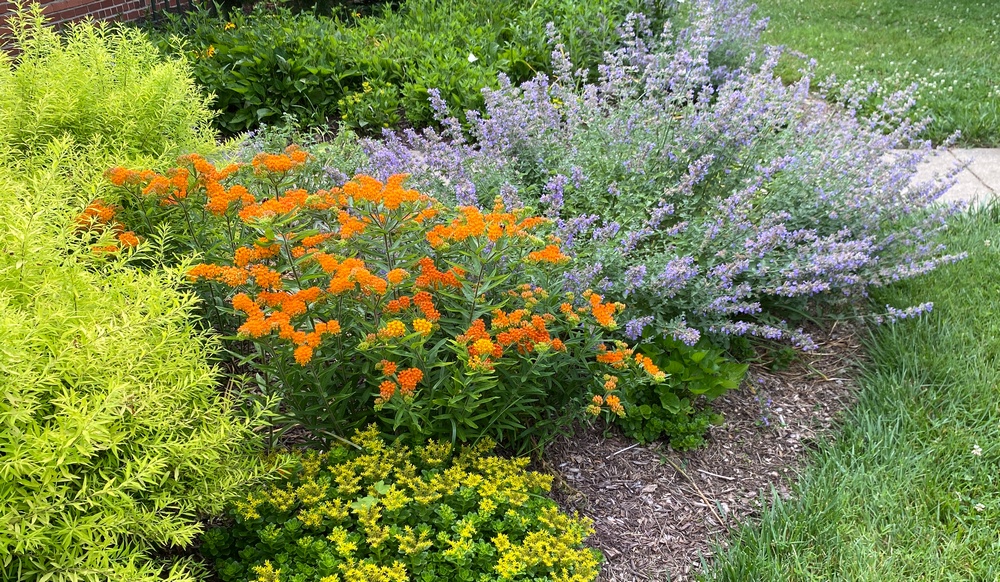 In one of my adopted gardens, the one at my coop’s admin building, I’ve fallen hard for two plants that were new to me.

A coop member/friend donated her full-grown Nepetas, and they make such an impact and for so long, I’ve planted several in my own garden.  Ditto the glorious Butterfly Weed that I planted here at the suggestion of the coop’s general manager, a gardener himself. I’m calling it “my new favorite perennial,” so it had better not disappoint! 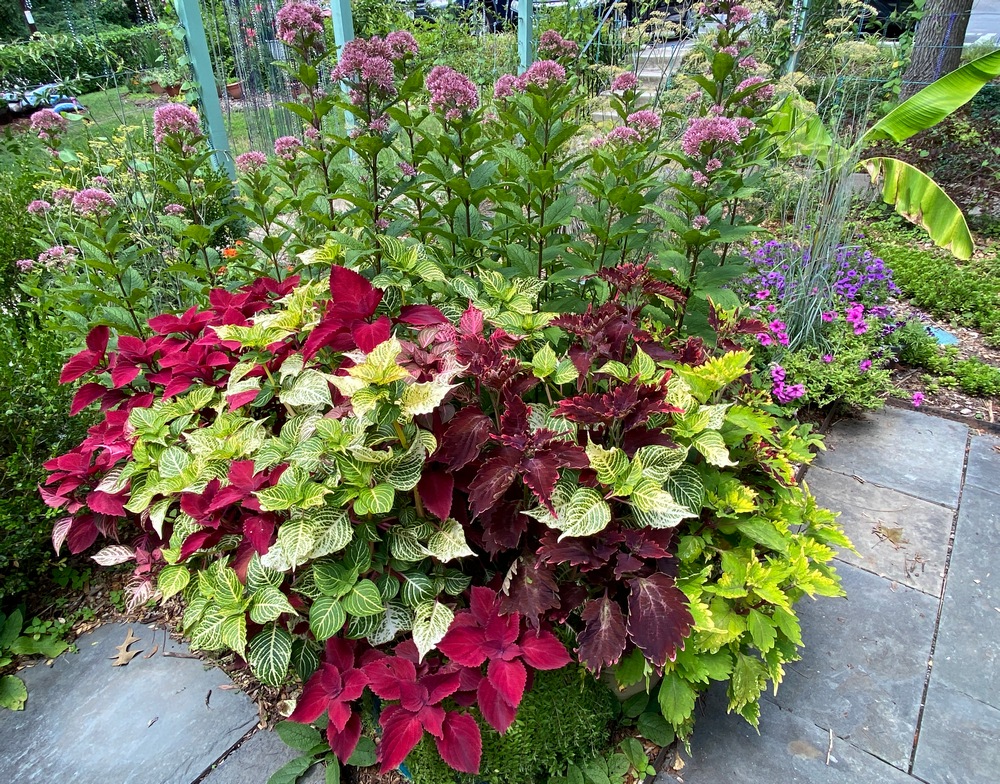 On my front-yard patio where several pots are grouped, I was thrilled with this combination of Coleus and Iresine.

Another hit this year were Zinnias, which I raved about in this post. 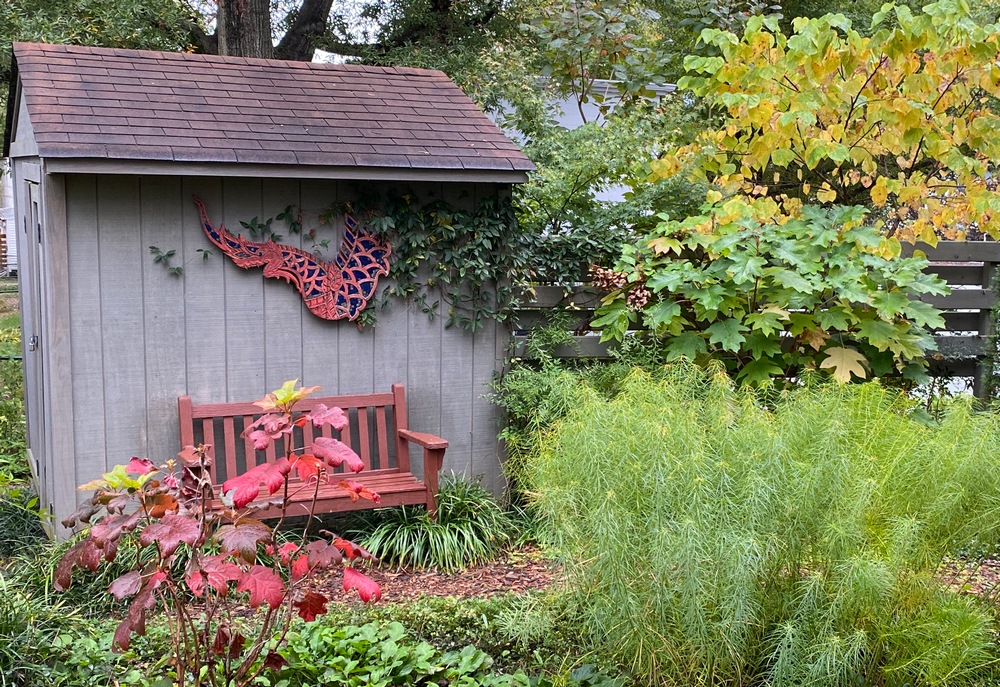 I MAY be expecting too much of oakleaf hydrangeas. I just want them all to turn bright red in fall like the one above on the left, which achieved that in September of its first year in the garden. Contrast that one with the hydrangea on the right that showed virtually no color in this mid-October shot. 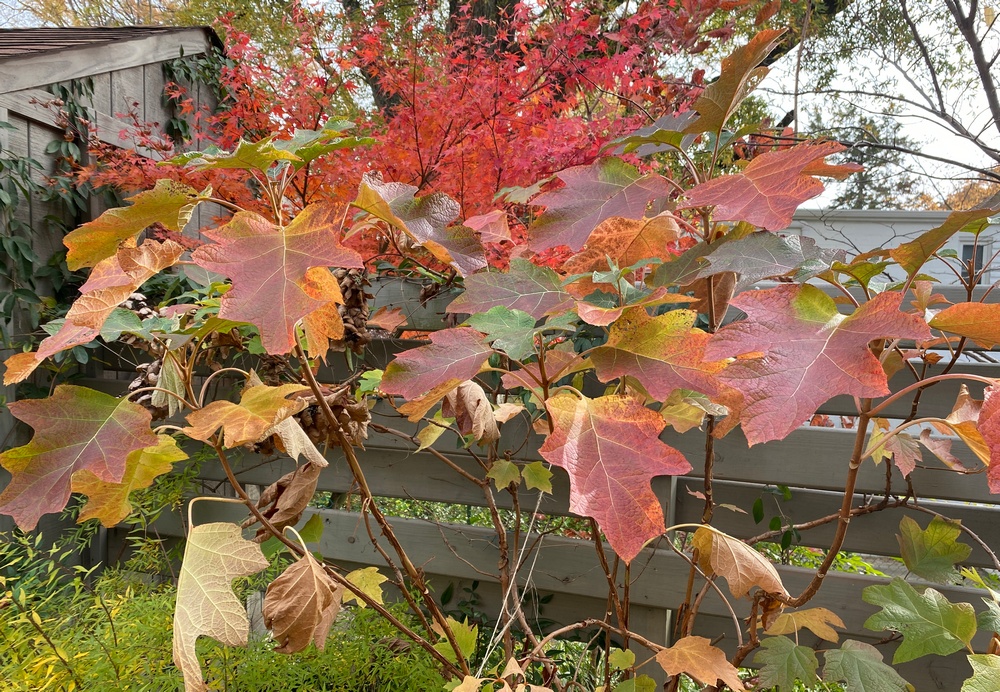 By mid-November, above, it’s turned varying shades of mush, and never got any better. 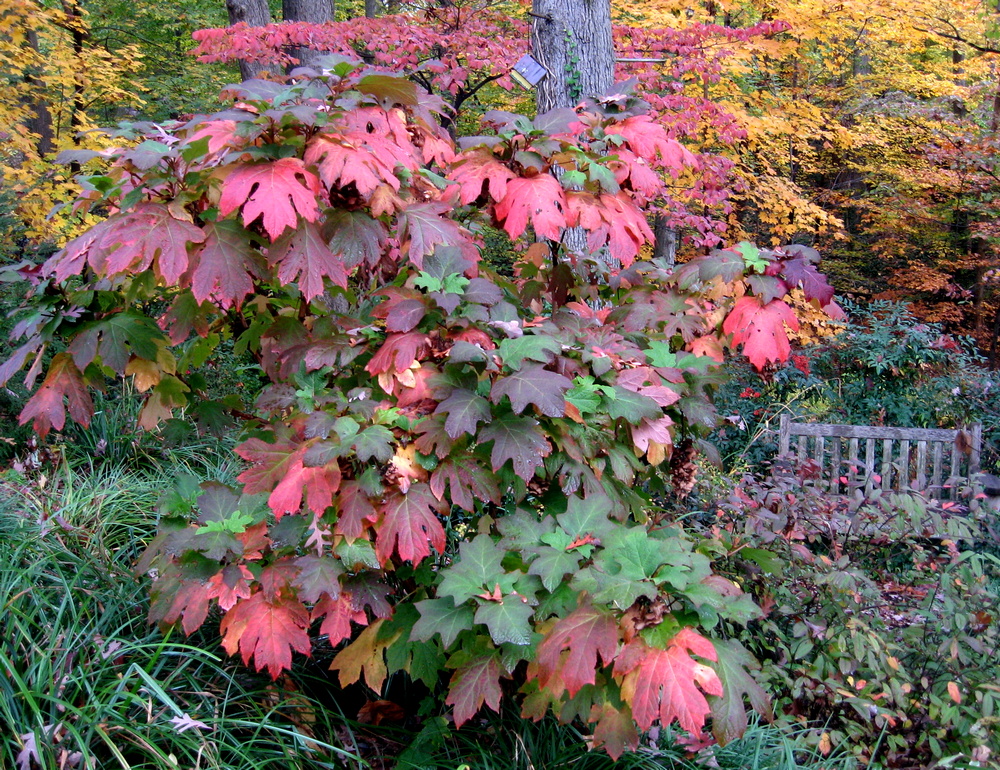 Do different varieties have different amounts and types of fall color? I’m assuming! I’d just taken fall color for granted because I’d grown the one above in my former garden, which colored up like this by November 1 in its woodland setting. What a plant!! And the passing deer just ignored it.

(Notice the very same bench you saw in saw photo above? I bought it in 1985, did nothing to it for 27 years, then finally had it cleaned, sanded and painted to match the shed roof and my $3 dragon wall hanging.) 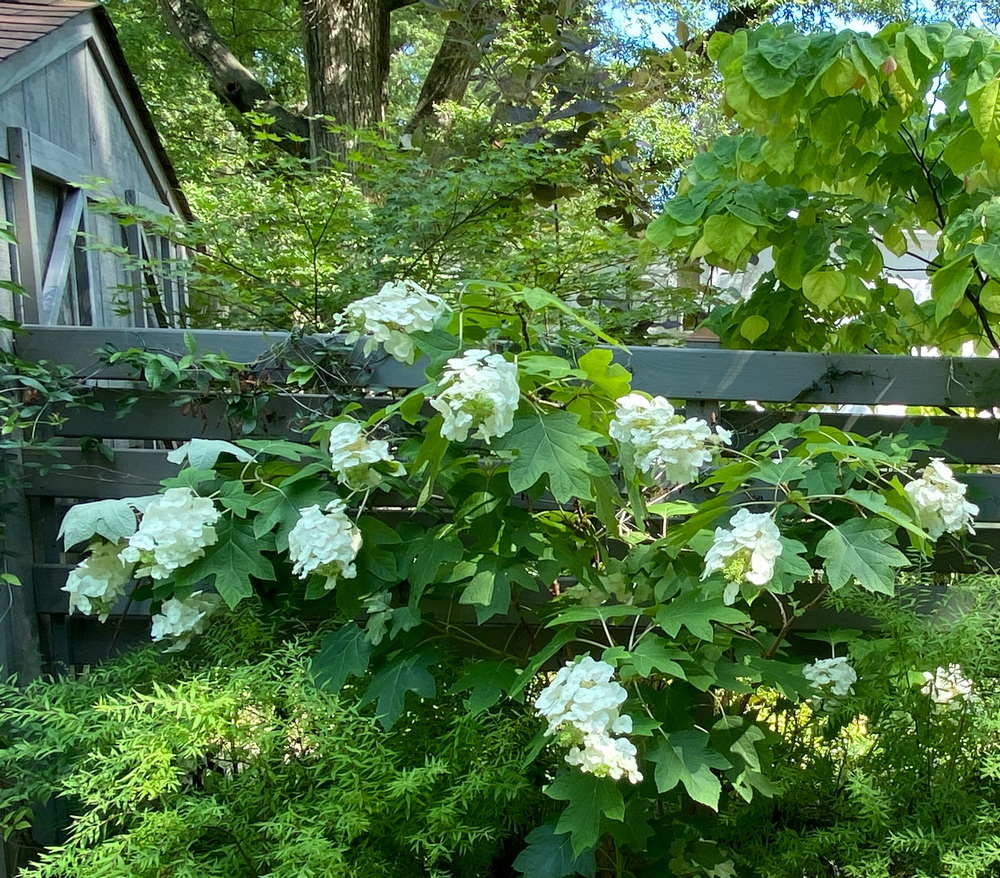 The same hydrangea bloomed TONS in 2020!

Gripe number two about the disappointing hydrangea is that it produced literally three blooms, two of which can be seen in the top photo. I have NO idea why and if the person growing this were anyone but myself, I’d accuse them of bad pruning. I like to think I couldn’t POSSIBLY make the mistake of removing most of the next year’s buds but I don’t know who or what else to blame. Got any ideas? 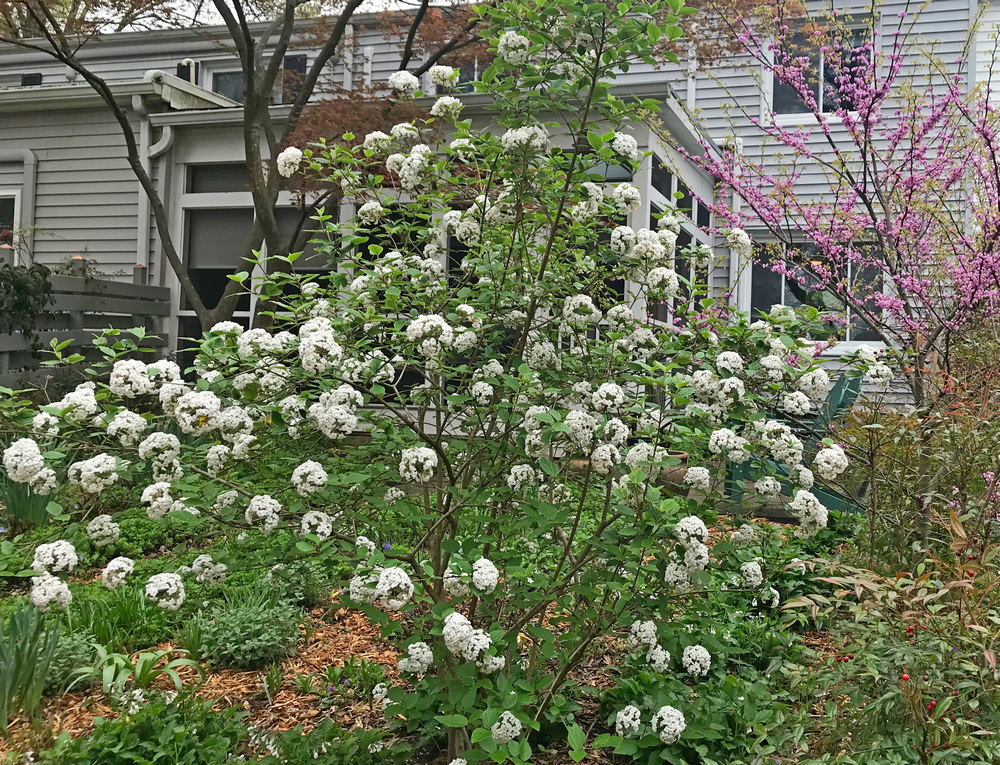 Why-0-why did my Koreanspice Viburnum suddenly DIE this year? No idea! I’d planted it nine years ago in the perfect spot for privacy from pedestrians passing by, but close enough to the porch for me to smell the blooms. To me it’s not a great-looking shrub, ever, but it did the job it needed to – until it didn’t. 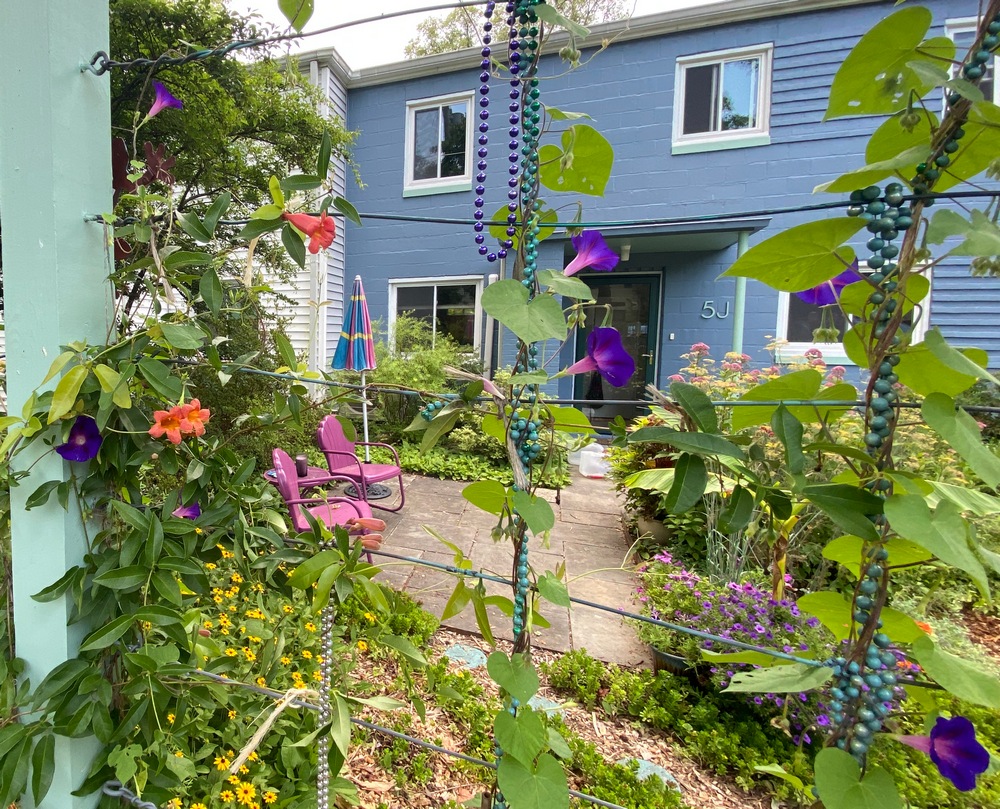 In my front garden I ditch the arborvitae hedge that was supposed to block a bad view and provide some front-yard privacy, replacing it with wires and four of the evergreen perennial (also native) Crossvine (Bignonia capreolata). Its job was to quickly cover the wire. 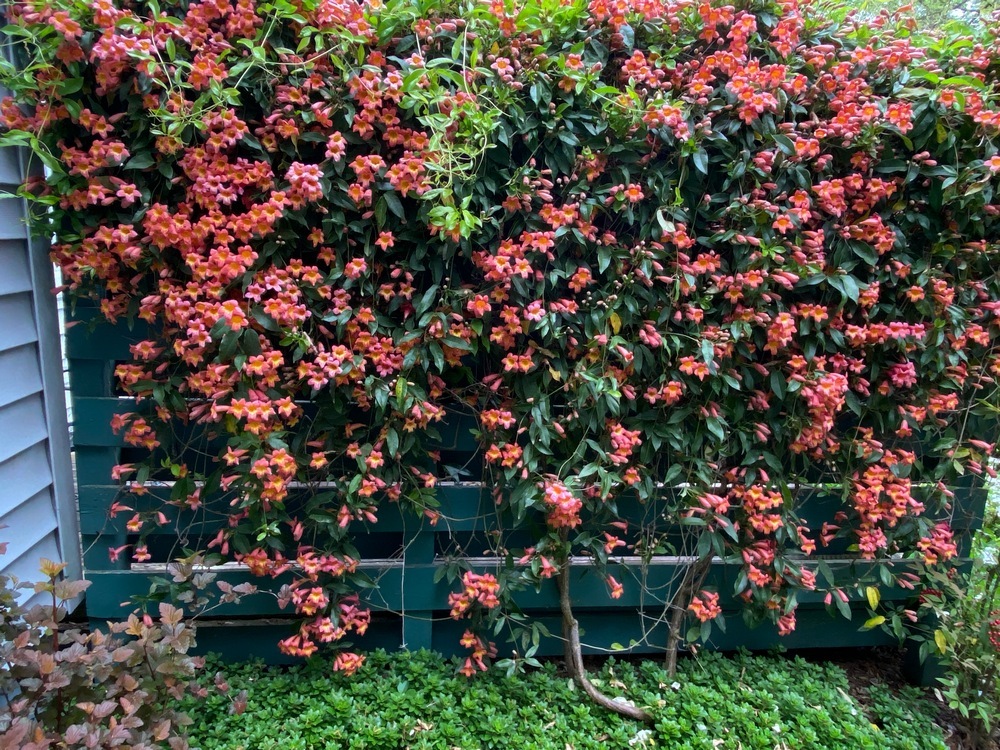 I wanted it to quickly look like this screen in the back yard – covered with foliage every day of the year, blooming like crazy in May, then reblooming sporadically all season.

1st and 2nd years of growth

I console myself by scrolling through photos like these of the very same plant in its formative years. They remind me of what we’re told so often about perennials – that in the first year they sleep, in the second they creep and in the third they leap.

You’d think after gardening for decades I’d have more patience about plant growth, but noooooo. Actually, I hate to think how impatient I’d be if I hadn’t had gardening to teach me a thing or two about life.