A cemetery is the liveliest place in town 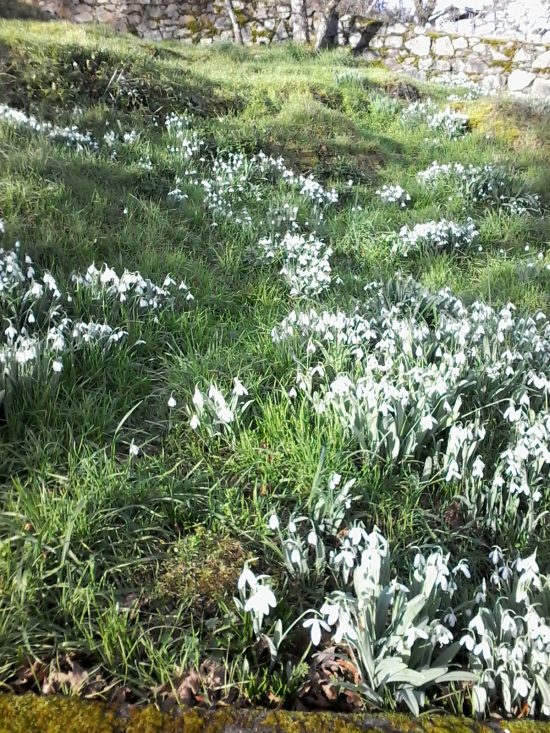 If you want a bit of life, go to the cemetery. You’ll never be alone there, and I’m not talking about “dem bones dem bones.” In addition to the buried folk (and the colorful stories, poems and snippets of history on their headstones), a great many living beings can be encountered as well. Sitting on a bench in the cemetery near me, in the shade of a venerable tree, I’m accompanied by an entourage of birds. On the ground, if I bring a snack, I’ll be joined by squirrels. Many urban deer make their homes here, for, as properties are subdivided and housing densified across the neighbourhoods, the cemetery might be a town’s largest remaining green space.

There, the earth stirs. Underground, the world hums. Fungi silently wind their tendrils into the roots of shrubbery, transporting soil minerals into plant bodies, metabolizing growth. It’s a busy place, a graveyard. If you did a “bio-blitz” there (a species count over a day), you’d find a plenitude of insects, hills of ants, nests of spiders, maybe even a den of garter snakes. In my town, tiny speedy lizards dart over sun-warmed gravestones, descendants of lizards that escaped from an erstwhile zoo.

Seeds scatter and acorns fall. Jays move them from place to place and forget where they put them, leaving them to germinate and perhaps extend an urban oak woodland. Wildflowers, given a chance, erupt in the grass between graves and attract bees and hummingbirds, which scatter pollen and keep life blooming in the midst of the grave-dwellers’ long sleep.

Downtown there’s noise and crowds of people robotically lurching across intersections, eyes fixed on smartphones while cars honk to get their attention. That may be a sort of urban “liveliness,” but it’s not life, like the life in a garden. The best cemeteries double as park space, and may have the best chance of surviving as such, since to graves we accord a certain … gravitas. Private household gardens may be wantonly built over, but  civic cemetery or atmospheric church graveyard is a site of precious conservation. 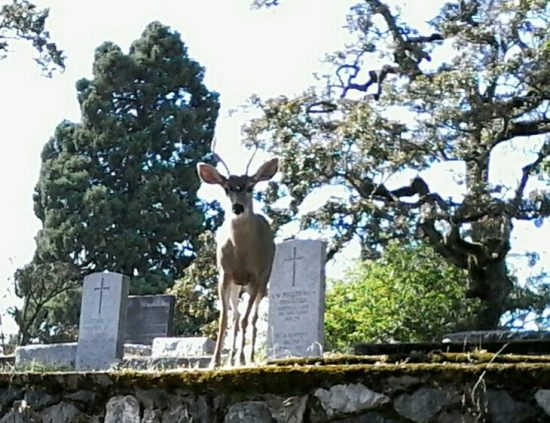 Each season presents its own wares. Snowdrops often appear in spring in churchyards because during the Victorian Age in England they became popular for their early blooming and pure white color, apparently seen as symbols of hope, purity, innocence, and consolation. Lilac comes shortly after, with swoonworthy fragrance. In some cemeteries, a wise past gardener might have had the wit to plant a California lilac here, a hydrangea there, with the blue hues glowing softly in summer evening light after the setting sun lights up the red hot pokers. Robins trill their commentary. Unfortunately, in spring the predatory crows might steal the robins’ eggs from their nests. The cemetery’s full of life, but not always peacefully so. It’s full of real life in all its competitive biological variety.

Me, I watch the groundskeepers, and think they must have the sweetest gardening job in the world. They’re not the only ones doing it, either. There are adhoc “shadow gardeners” here and there, neighbours who tend the graves of relatives and gather a few seeds, snip a few cuttings, even pick blackberries where brambles are still allowed to surge over the fences. Why not? In December after a windstorm, I gather blown-down branches of cedar and fir, bringing seasonal scent into the house just as the pagans once did (in Latin, pagana, the “women of the countryside”).

The contrast of death and life adds to the theatricality of the setting. In growing cities with shrinking green space, we can only hope this show is allowed to go on, that here at least the big trees—the chestnuts, cedars, hemlocks, and firs—will keep their protections. Many a Victorian cemetery was planted as an arboretum, filling a double role as final resting place and generative growing place. As “habitat,” it was as much for the living as the dead, and with botanical habitat shrinking everywhere else, the cemetery may be the last place where plants can live in peace.