As you will have gathered by now, I am not a professional designer. Which means a great many things, one being that my plans often don’t seem to work.

However, sometimes a large enough number of plants manage to survive the ravages of weather, rabbits and other rampant wildlife, plus my failure to properly discern the Right Plant for the Right Place, that I can then study the result. And decide what’s wrong with it.

If I’m lucky some other person may have already told me but usually I am the only person taking this much notice. And sometimes if someone tells me, I don’t actually feel certain they’ve hit the spot, as they have quite different preoccupations. (That’s for another time…) So I spend considerable time staring, at different times of year, trying to work out what is needed to make this part of the garden sing.

This usually results in expenditure on more plants. Though it may result in the removal of plants. It’s usually a pretty dreadful business shoehorning new plants into existing planting. The best time is spring, when you can’t see what you’re destroying as you take a spade to what looks like a suitable empty space where you wish to add a plant.

I’ll give you some sense of how easy all this is. I have for some years been trying to get fennel to grow and spread (as it’s supposed to, ha ha) in the Crescent Border. Somehow, I did get one going last year and it looked amazing and added a touch of oomph when it was needed. 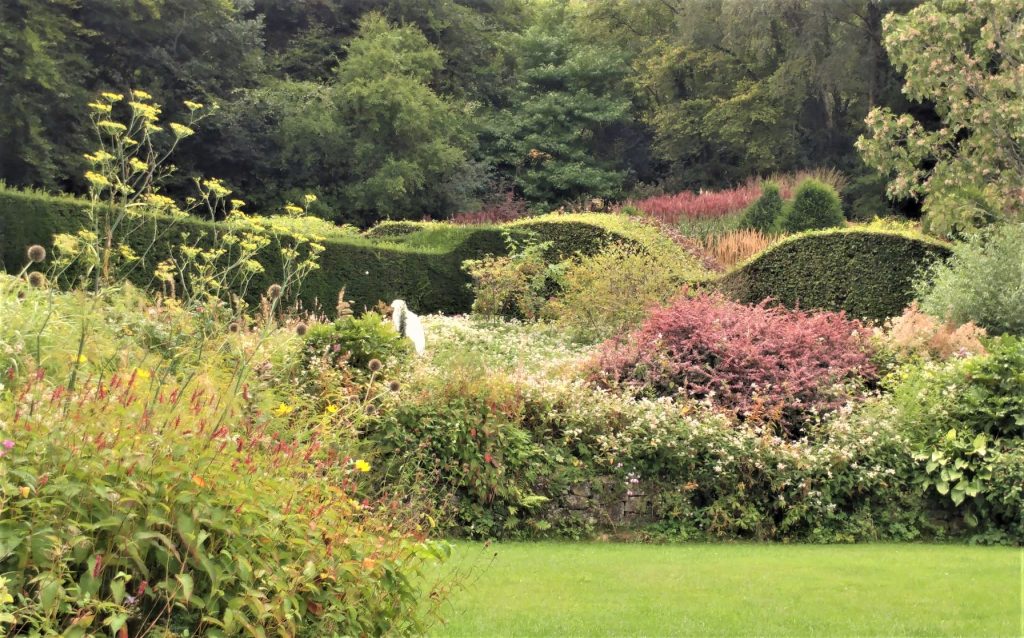 But more of the same was required for it to work as design rather than a random sticky up bit.

So this spring I bought several pots – tiny and affordable – of fennel and squeezed them in all round the front edges of the border where I wanted them. Several were instantly food for snails. And don’t imagine I hadn’t prepared for this – they had been carefully slug pelleted. I discovered two expiring snails which had eaten the fennel before the slug pellet.

Then existing foliage ramped up and overshadowed the remaining fennel plants. I cleared their sites daily, so that it was not long before I discovered that something had just sheared off all the foliage of the baby plants and left it shrivelling alongside the bereft baby plant. 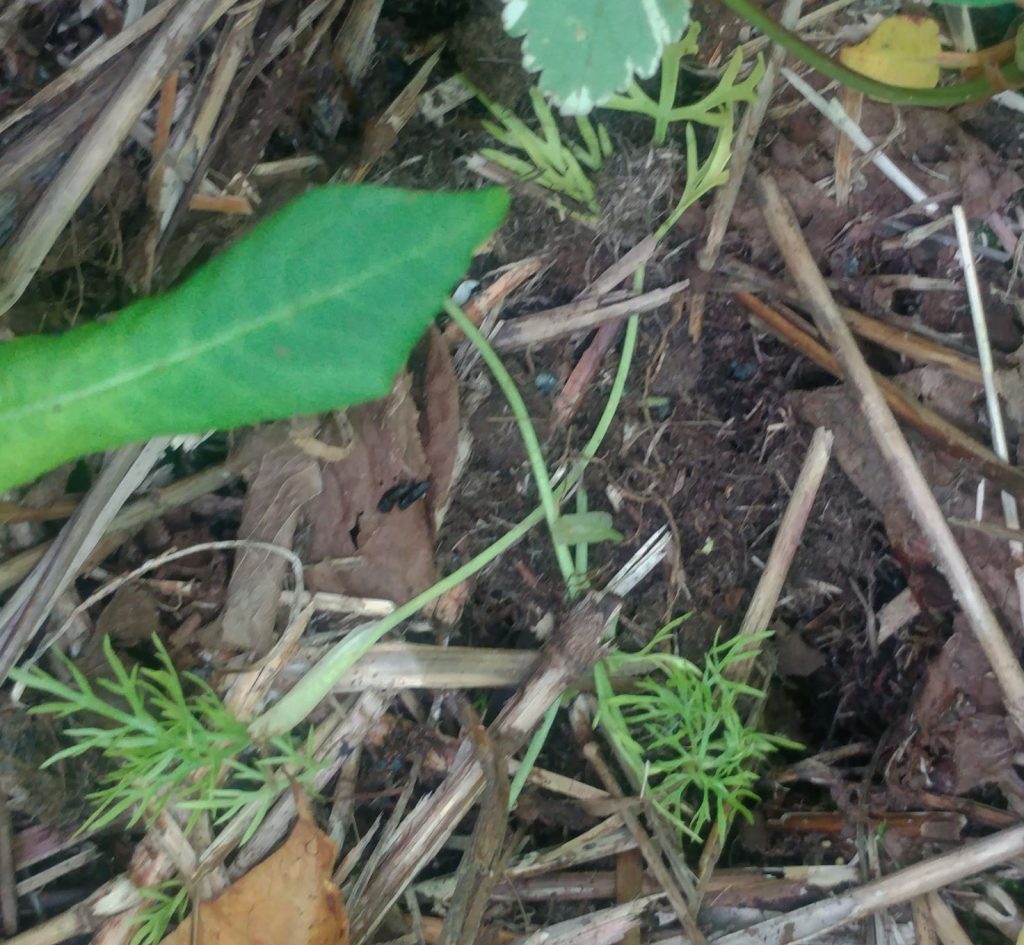 It may not be obvious to you, but that foliage is all flat on the ground……

So in a couple of months’ time I may be back to square one if I’m lucky – perhaps one magnificent fennel? 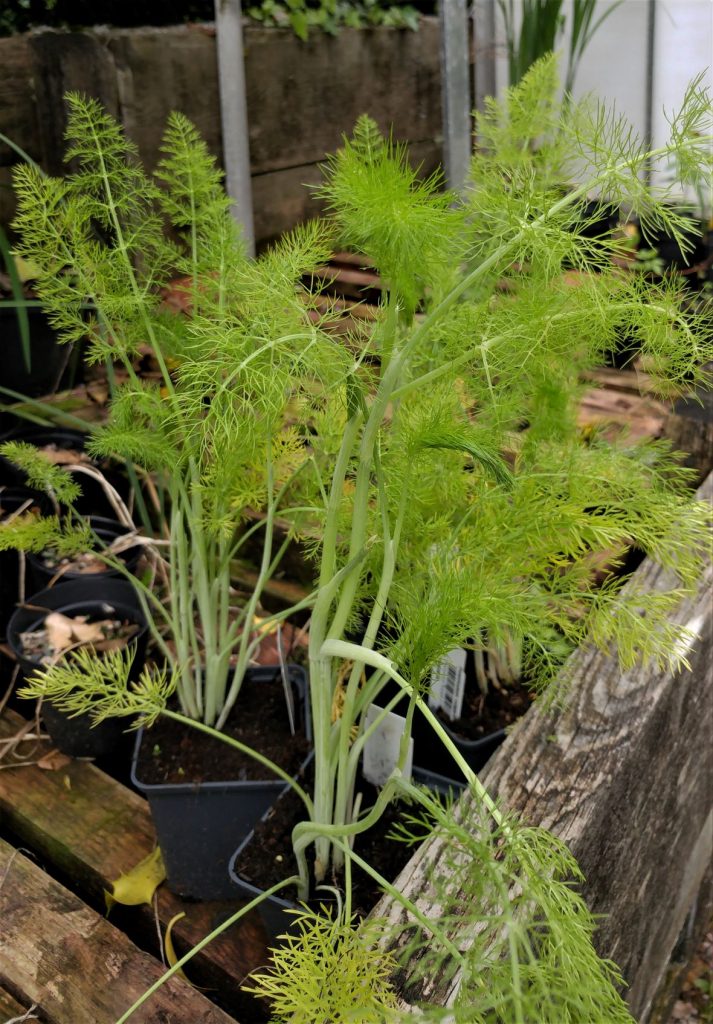 And, yes, I am intending to try again…..

This border, which is right in front of the conservatory and the terrace, is very visible to us and somehow seems to regularly defeat my scheming.  Here you’ll see Persicaria bistorta ‘Superba’ adding some modest colour right along the front of the border to enliven things before the rest gets going: 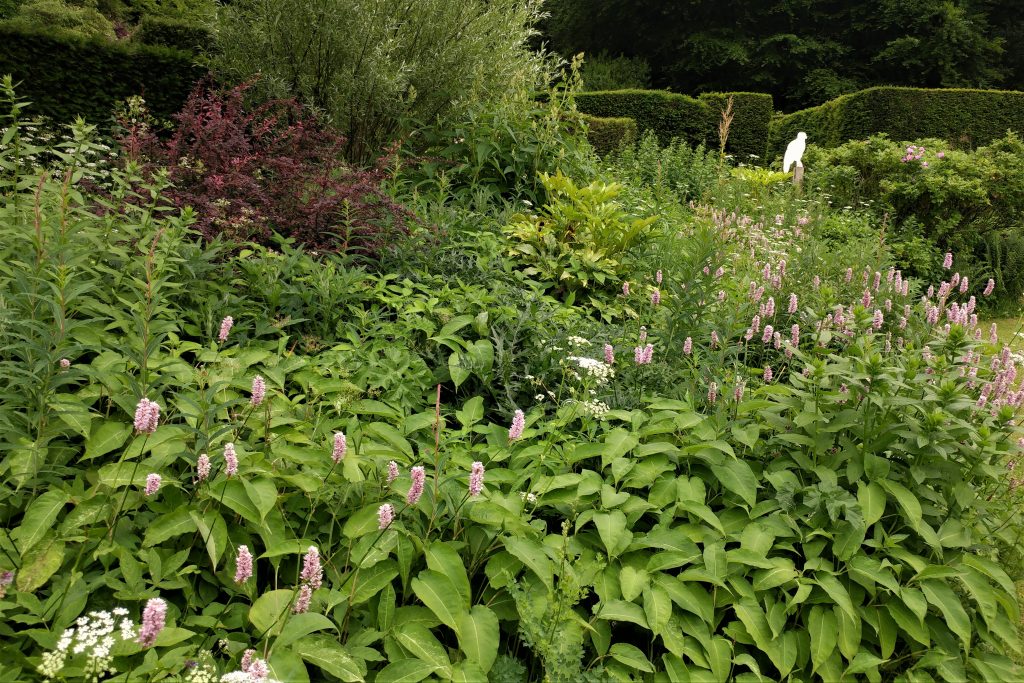 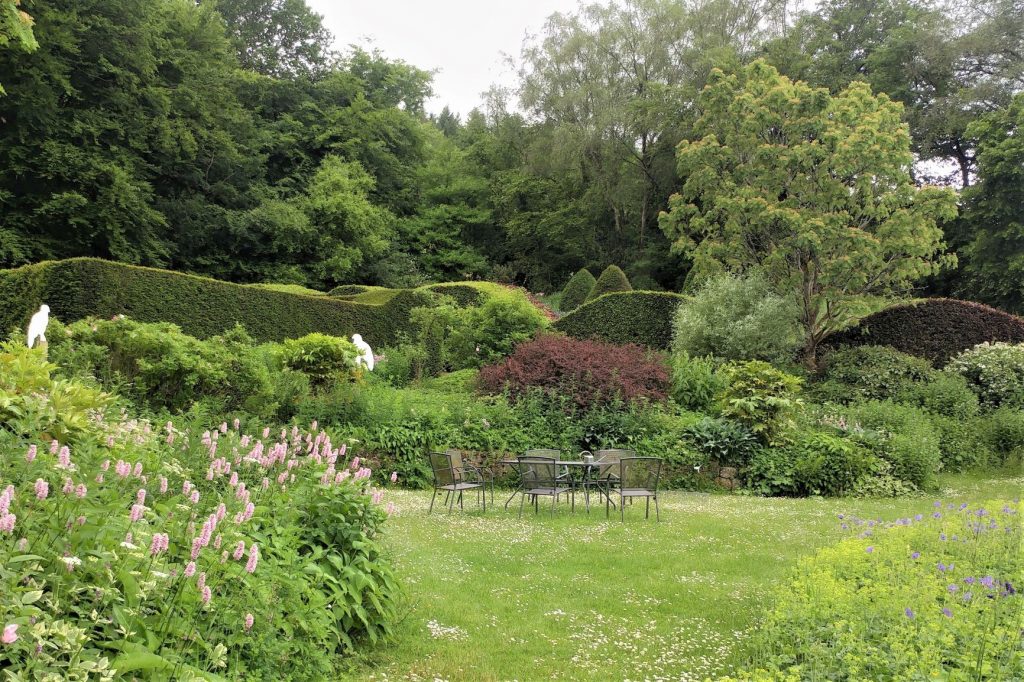 You may be able to see a little replacement Persicaria. With a magnifying glass….

So, I guess, I repeat all that next spring, and hope… It does do very well on the left hand side.

I may (fingers crossed and hope I’m not tempting fate here) be having more success with another scheme in the same (large) border. I have been delighted by Persicaria polymorpha alpina. (I do love Persicarias, but you’ll also find this one under many other strange names) Rather comically, given its name, it’s huge and its flowers fade very very slowly and beautifully, from white to pale buff pink. 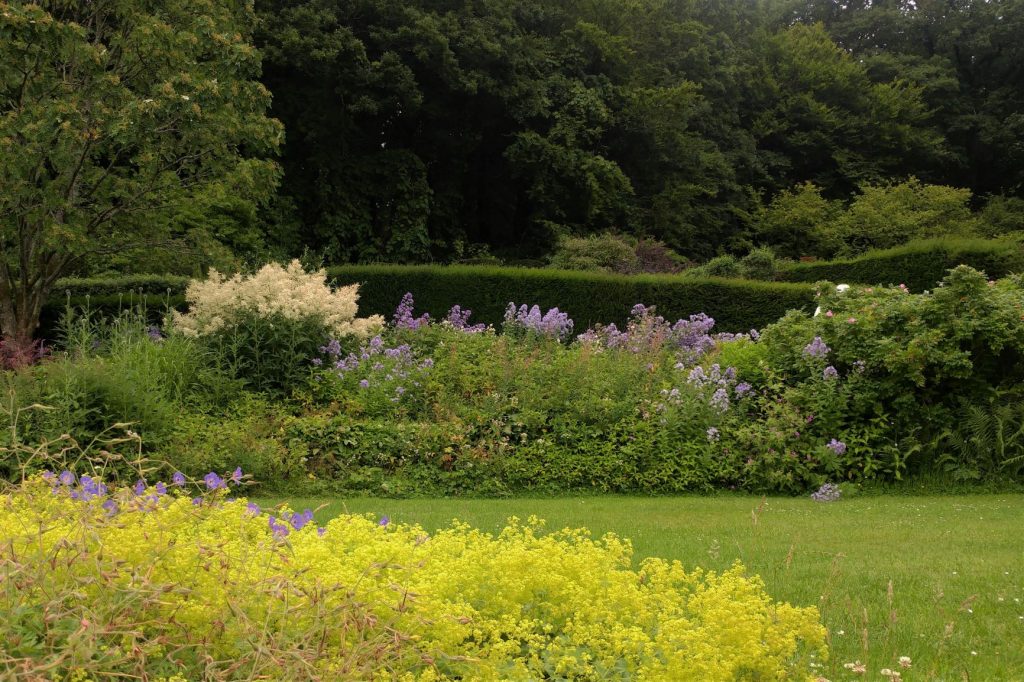 There it is, in solitary splendour. I’m not at all fond of the ‘one of these then one of those’ borders, so action is required.

It’s a great addition to the border and wouldn’t it look good better repeated right along the whole border? I will spare you the tedious descriptions of the failures and disappointments over several years. I will just say, with my fingers crossedagain, that I have spied several of these plants, in what I estimate to be the right places, popping up this week. We shall see. Or – we won’t….

I think the Crescent Border works for the rest of the summer and autumn, with Campanula, more Persicarias, Chamaenerion angustifolium ‘Stahl Rose’, Helianthus and other vigorous beauties. See here and – 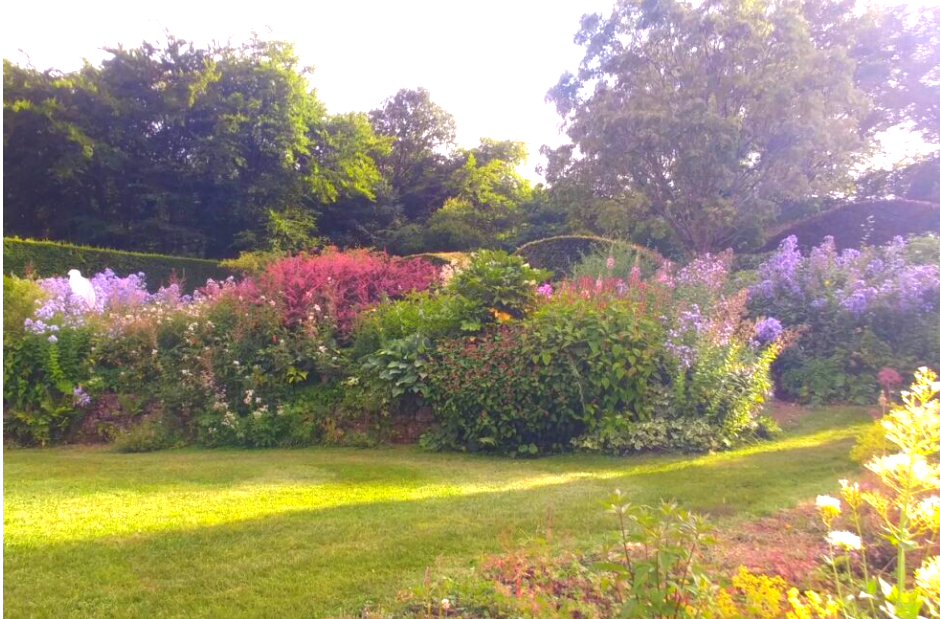 I have been doing this garden thing long enough to have some reasonably successful schemes.

I’ve shown my May and June delight before – the mass of Euphorbia Fireglow (or Dixter – who knows??) in the Front Garden. 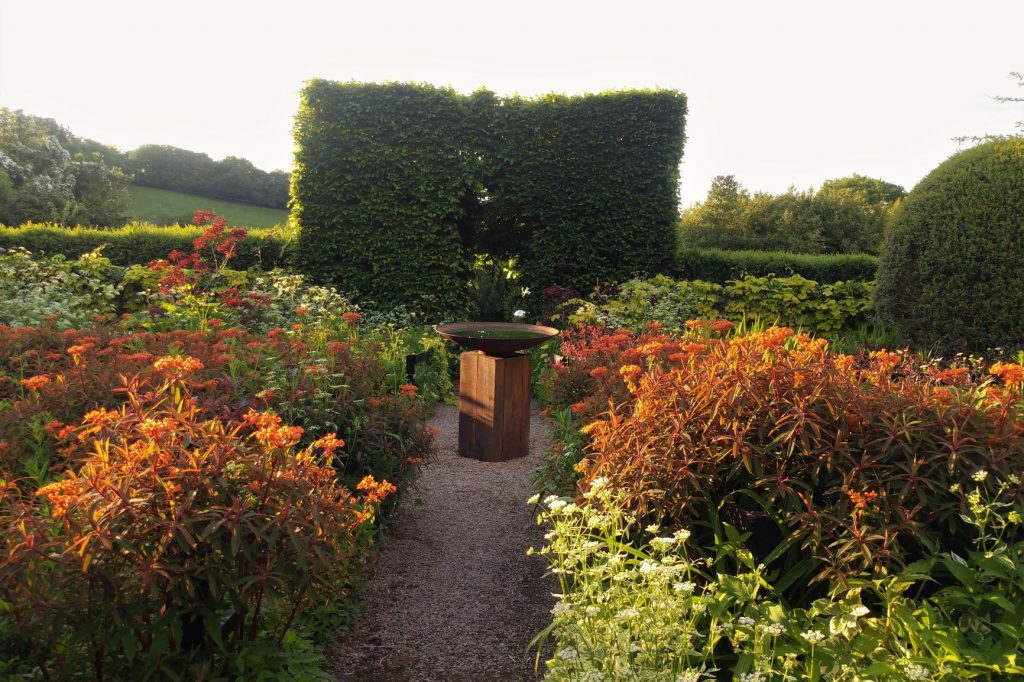 The Hornbeam Tunnel is a bit wonky, but that’s not my job…..

This does get followed by a variety of tough plants doing quite delightful things. 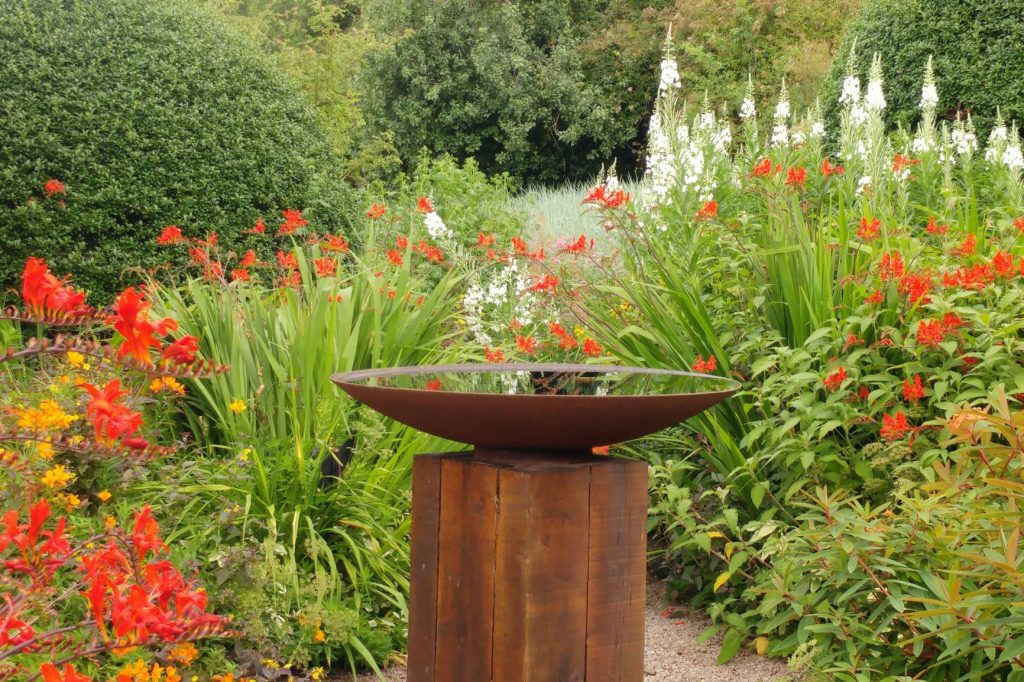 But then comes August and I’m finding it less appealing. And this is the in your face garden, right outside the front door. So, for some time I have wanted a solidago to appear in two beds instead of just one. 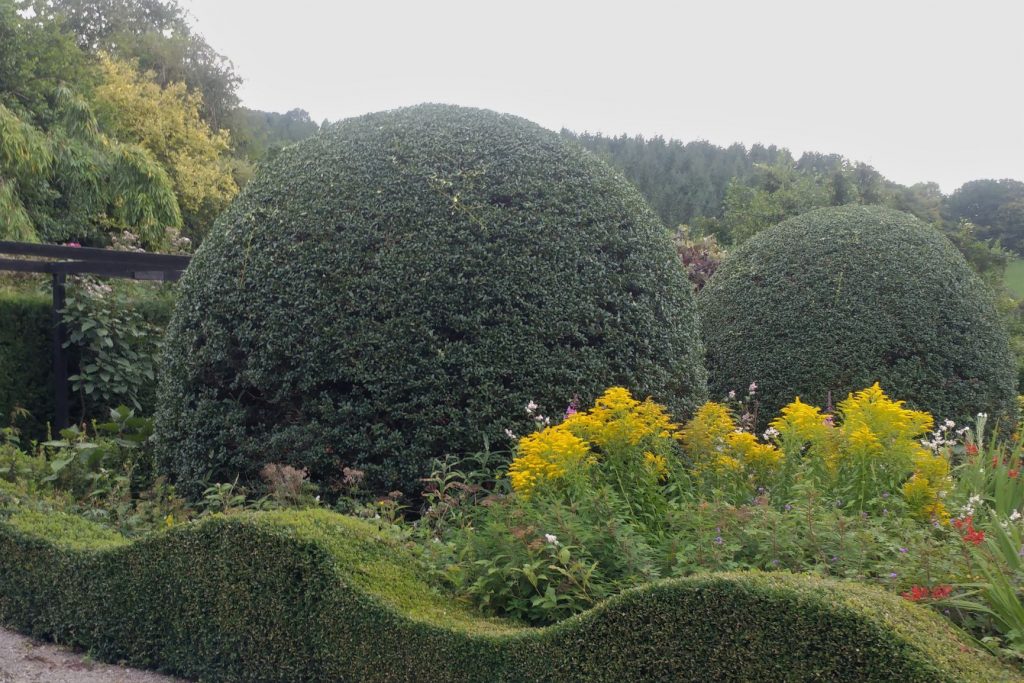 It’s been there for some time without taking over. I love it!

Yes, that old weedy thing that is so universally hated that I have been unable to buy a new one anywhere for the other bed. But – hey! This spring I dug one up from elsewhere in the garden and I think it is surviving the move. My mistake has perhaps been trying for the past two years to move it in late summer.  Maybe I’ll win this one this year – and it will be even better if the white epilobium manages to shine in both these beds with it. There’s lots of it in one bed and just a soupçon so far in the other.

I once had a visitor who was a garden designer. She volunteered to find something to critique in the garden. I directed her to these still rather random beds, which were needing the kind of attention I’ve just been discussing, so I was wondering what she would think. She came back telling me she could see nothing to fault. In my book, she failed.

There is a place in the garden where the basics were already there – a bit of ancient pasture. I looked at it and thought about how on earth I could plant it and felt a little overwhelmed. Happens a lot, here. Then I decided to plant into it instead of messing it up by clearing it. So I have planted into it for years.

Its climax in late summer has become special – and perhaps unique? 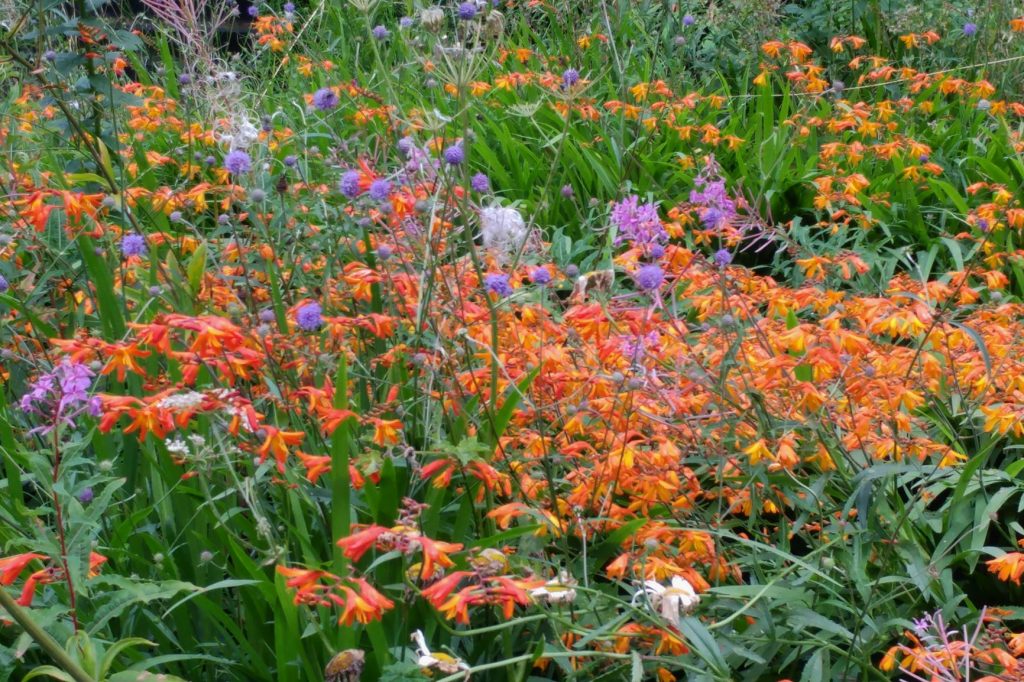 A mix of wild plants which were already there and my additions, fighting it out. 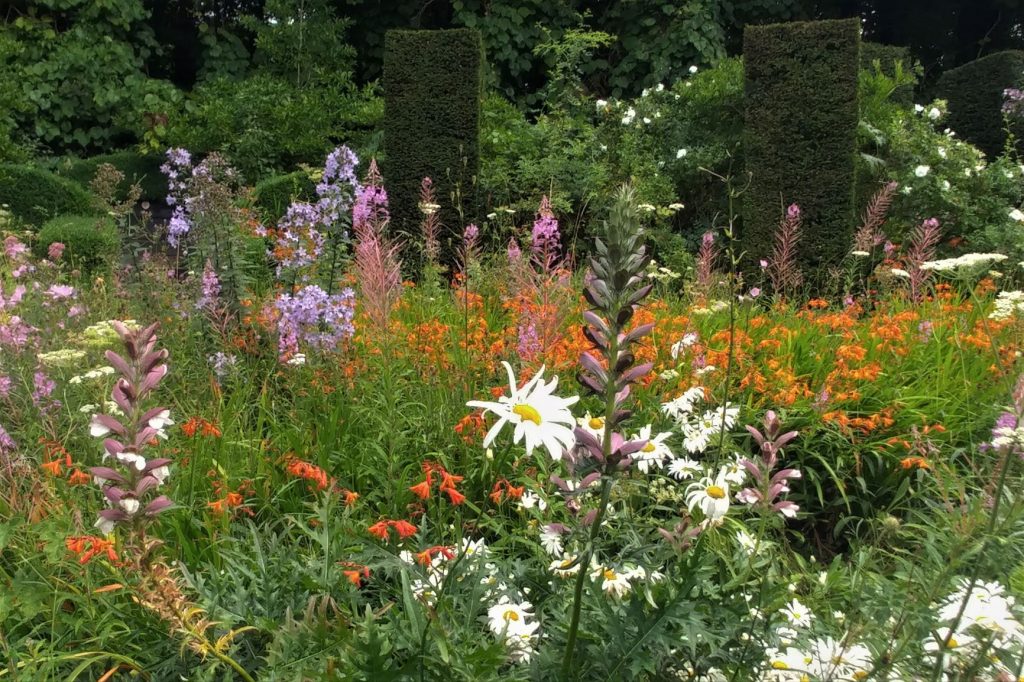 The challenge then becomes how to sex this up earlier in the year?

Well, for about a solid month Charles finds and squashes lily beetles so that we may have these: 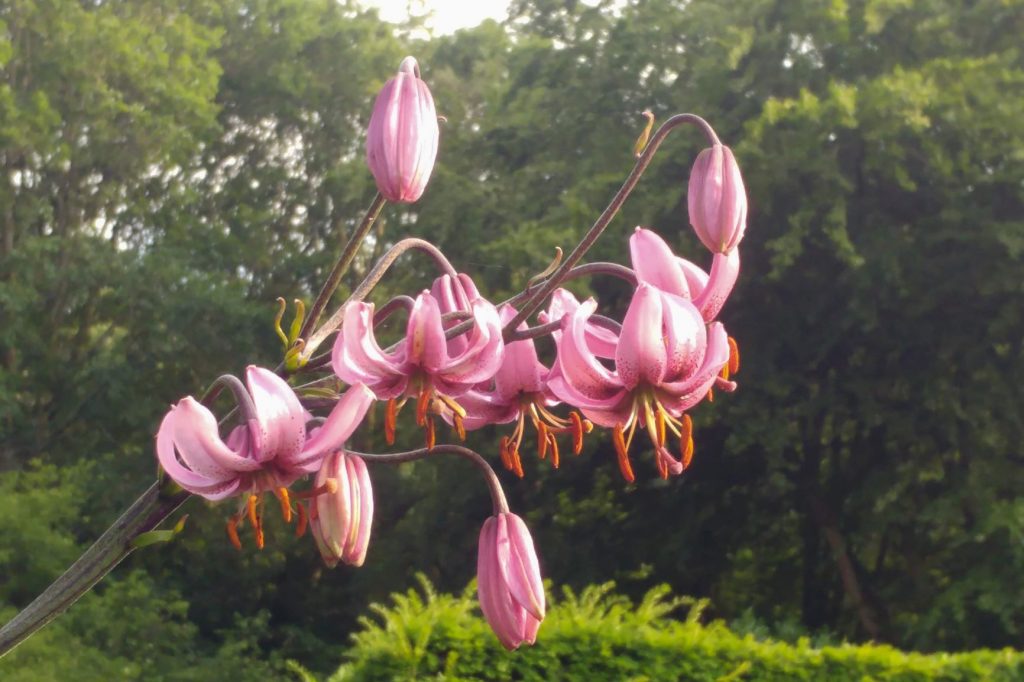 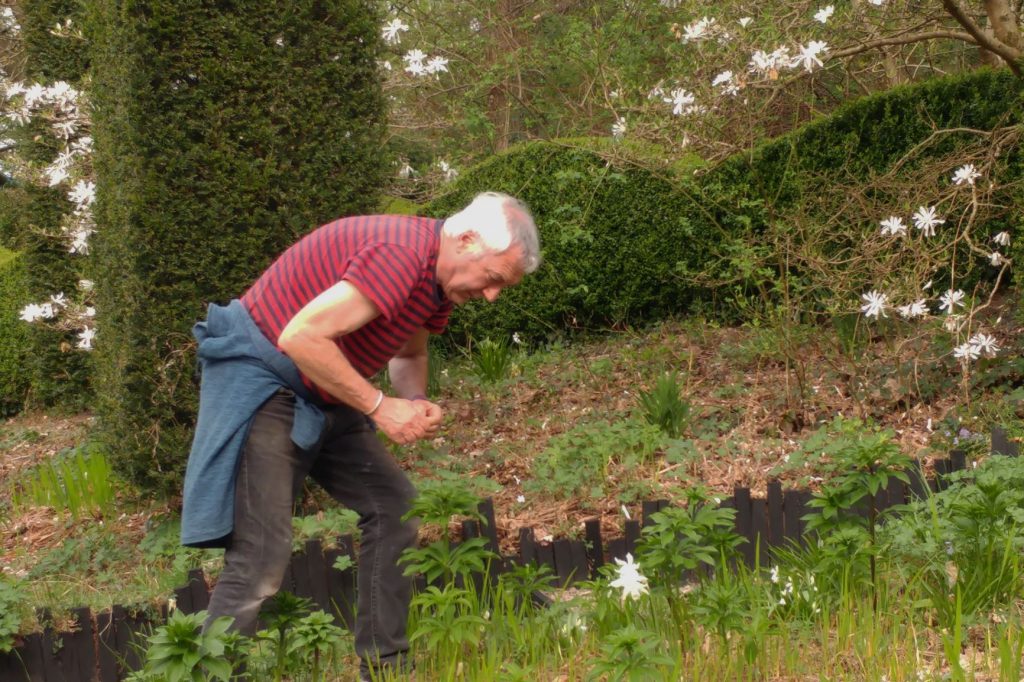 It’s especially hard planting into old meadow but happily some things romp away in it and the Martagons are among them – they are seeding extensively. That is a magic way of embellishing a place. It needs more bulbs in spring – it currently has white narcissi, wood anemones and white bluebells, which would work well if there were more of all of them.  And perhaps more early summer plants to go with the Martagons. What goes with Martagons (besides lily beetle??) It’s a tough business, keeping things going from spring through summer and autumn.

But perhaps more important than squeezing in plants, which I think will possibly continue indefinitely,  has been framing it. Because it’s a bit wild, I think it benefits from a bit of formality: 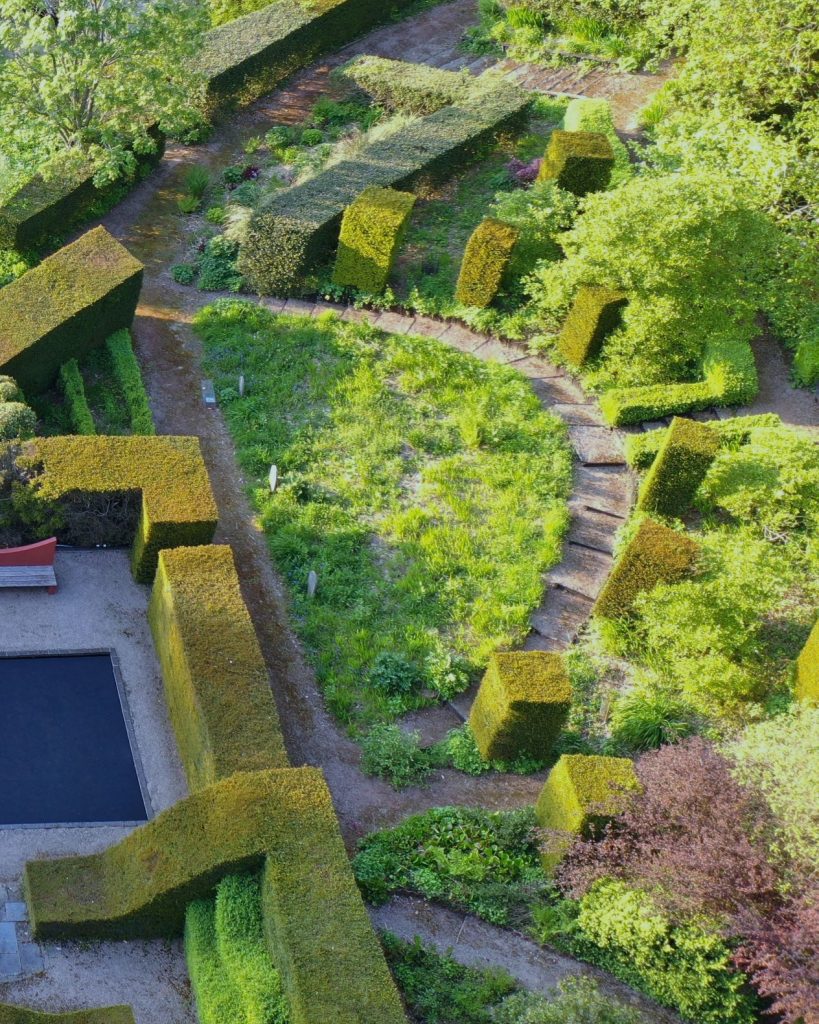 So it’s surrounded by pillars . And a little lacking in colour in early summer – the Martagons are subtle.

Reflecting on all this I’m inclined to think that what is needed for the non garden designer garden maker is persistence and patience.  My piece last month about the struggling new gardens is really just about the inevitable process: a garden has to fill out before you can see what’s wrong with it and what’s needed and if a plan works. And mostly it won’t for the first  ̶f̶e̶w̶  ten? years. And then it’s important not to begin to take for granted what’s there, but eye it critically, imaginatively and relentlessly.

Though I do wonder why I do. Does anyone ever notice or care about the failures? I see visitors mostly looking at individual plants, rarely standing back to enjoy the effects.

But there are some parts of the garden which give me a blessed rest from all that. We all need a place where there’s nothing to think about. 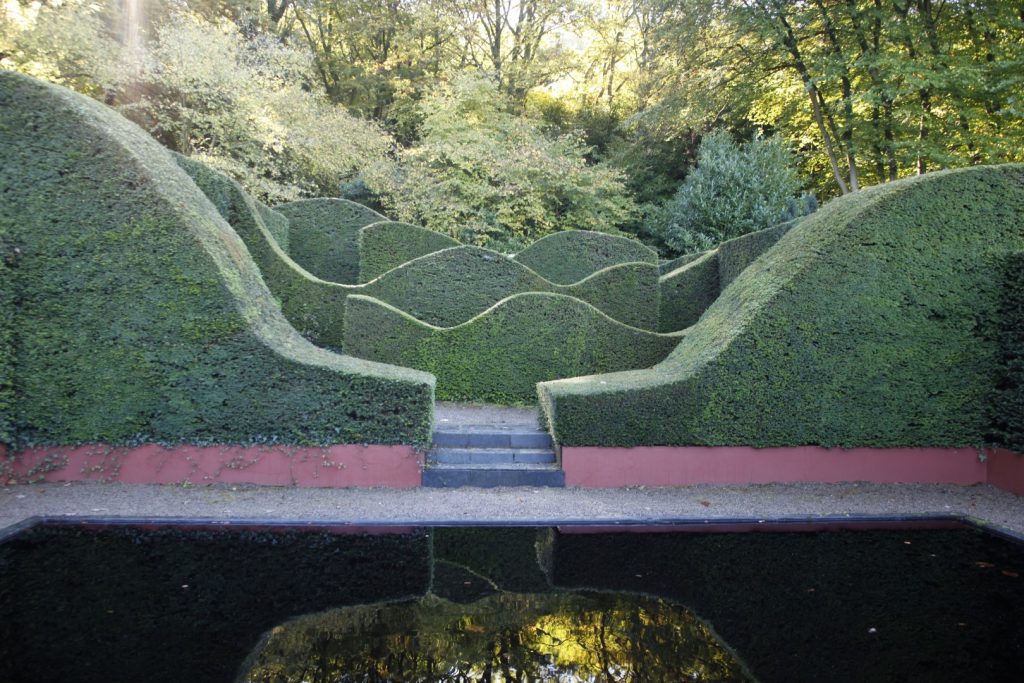