Not many people in Britain get to make a new garden, as the place is ram jam full of old gardens. This is not reflected in those surprisingly common and totally absurd articles which suggest that people might, for example, make a ‘drought resistant’ garden. Or after a rather wetter summer a ‘rain garden’. Recently people would supposedly have been digging everything up and chucking it away in order to make a ‘pollinator friendly’ garden or a ‘sustainable’ garden.

Given that most people treat plants like pets and are reluctant to kill any apart from those rather arbitrarily defined as ‘weeds’, it is truly hard to imagine how any of these clean slate, ethically sound gardens are supposed to emerge. But reality doesn’t figure much in our strange horticultural world. 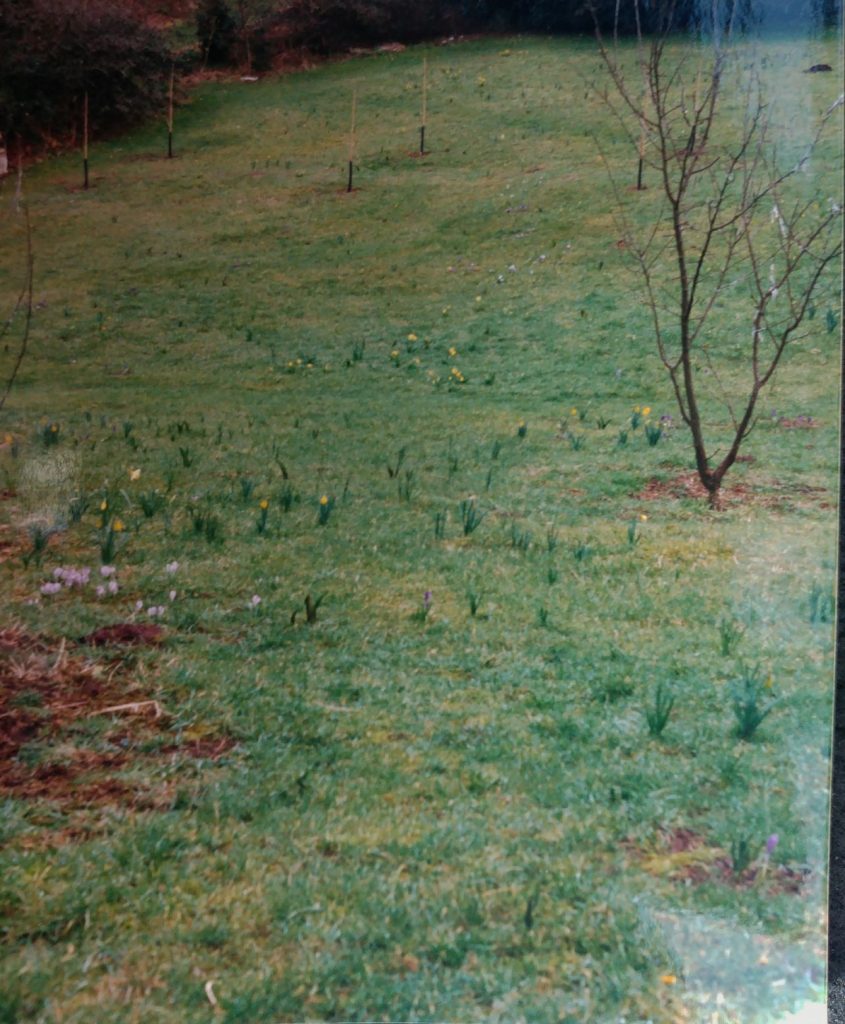 However, I have been in the fortunate position of making a garden on ungardened land, over a long period of time. It may appear from posh magazines that every garden in Britain is designed by a professional and executed in a couple of years, but we are still making ours, amateur fashion, after 33 years. Resources and the nature of growing things have made this a slow process.

And in the last few years I have been making three new gardens within the two acre garden at Veddw. From scratch, and I’m intrigued by the process.

Gardens are not instant, Chelsea notwithstanding.

It takes ages. Most perennial plants take about three to six years to reach maturity and a decent size, during which growth time they will have to compete with happy weeds – happy to find the spaces in between the plants. I have coped with this largely by the use of imported bark or wood chippings as mulch or our own grass cuttings used the same way. But there are many challenges, even in the recognise a weed department. Growing new plants, plants which I may never have seen before, especially as just two new leaves, can be problematic. As in distinguishing them from new weeds, which somehow seem to be able to find their way into the garden, despite the mulch.

Sometimes with the mulch. We used some mulch one year which had been underneath a tree, which had kindly dropped all its seeds into the mulch….

But it can start well if mulch is obtainable. And the newly planted and sometimes identifiable plants (identifiable because I have recently been able to plant them out of pots looking reasonably recognisable) – become my favourite visit. Just as long as the currently resident rabbit and permanently resident slugs and snails can be foiled. This is the current such garden with its mulch of grass cutting from the nearby meadow. 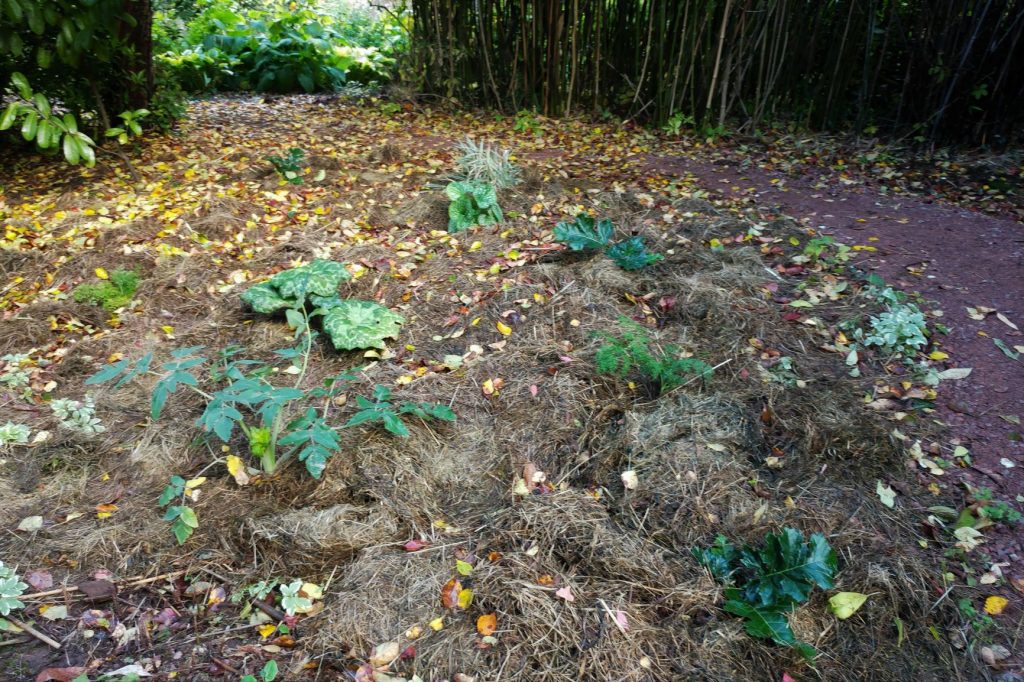 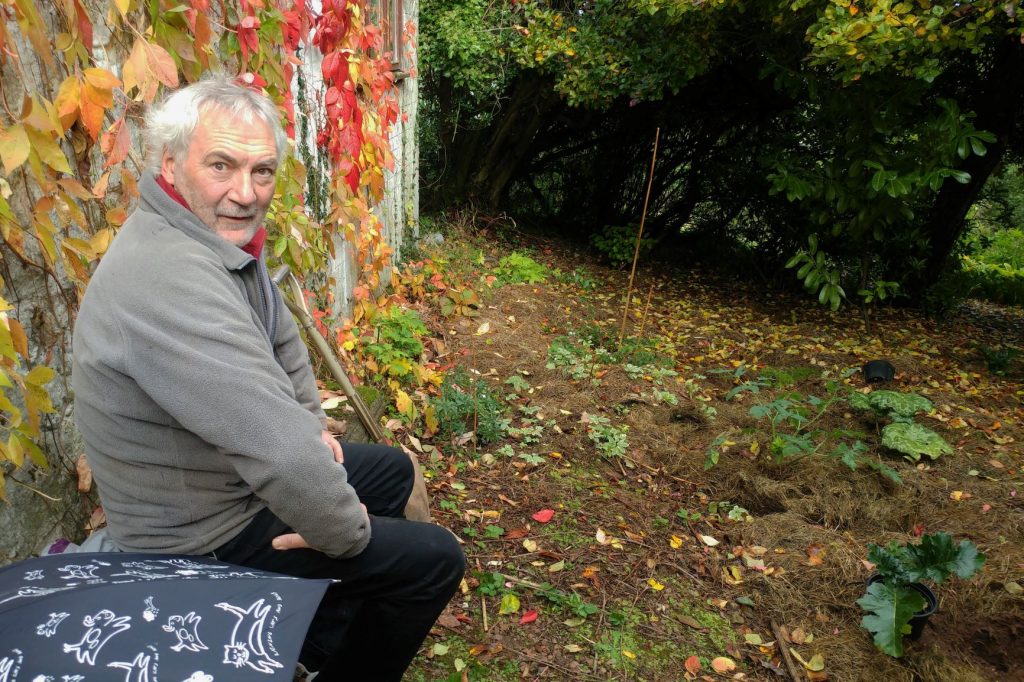 After the first year it gets more problematic. I’ll still have no idea what the plants look like unless I’m very familiar with the breed. And who knows if they will have survived the winter? (and rabbits) This is the time of year when I may go and anxiously examine what goes on. And I may equally avoid going anywhere near a newish garden because this may now be a garden which will look too bleak and empty, and I fear not much will return at all.

This can go on for some time. I am currently avoiding visiting the Cornfield Garden (explaining the name would take too long, but I will sometime..). I think that the first two or three winters feel the most anxiety provoking and that if you (by will power, I guess, or by miserably paying good money for replacement plants) can get a garden through those it may become a real garden. 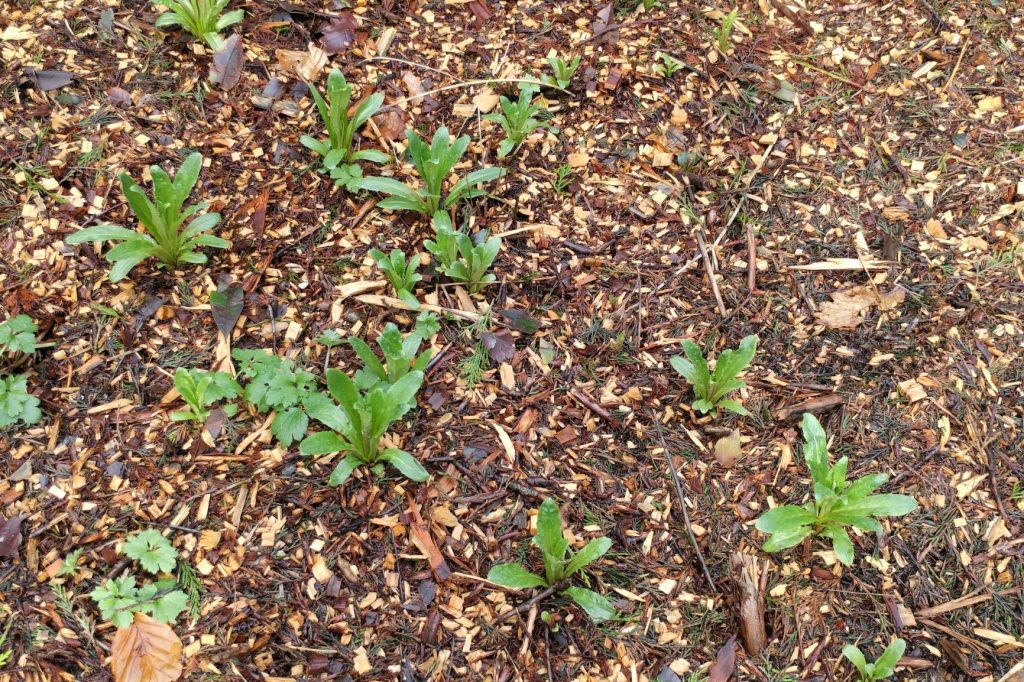 Sometimes there will be a sudden rash of growth – a sure indicator of a new discovery amongst weeds.

Last year in late summer it managed, after two years, to look like this!!! 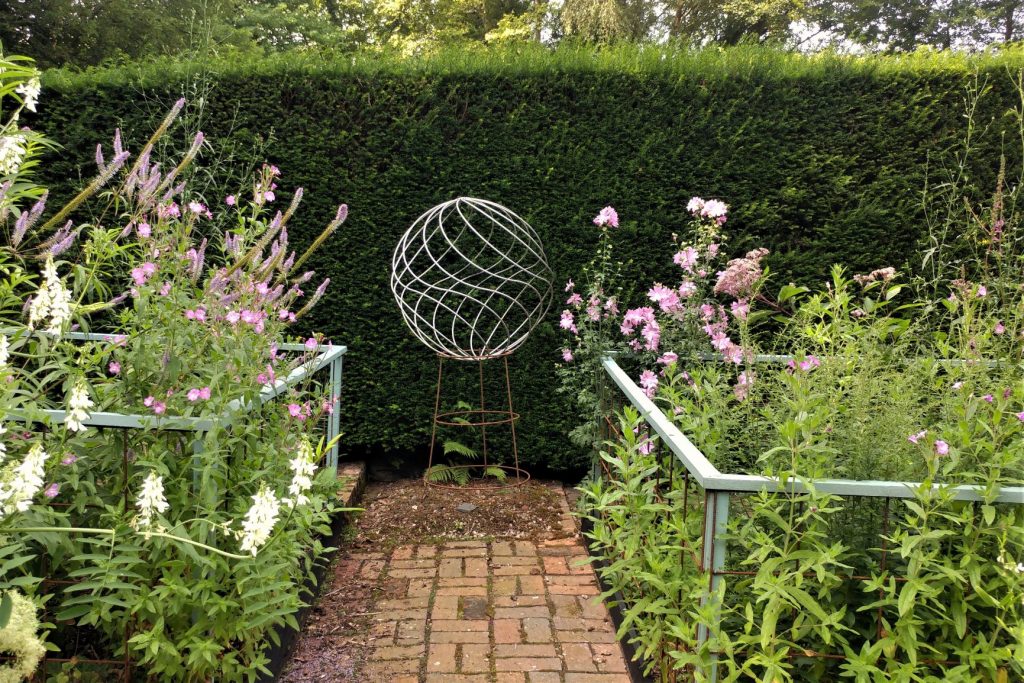 (Was that pink flower the weed, though??) 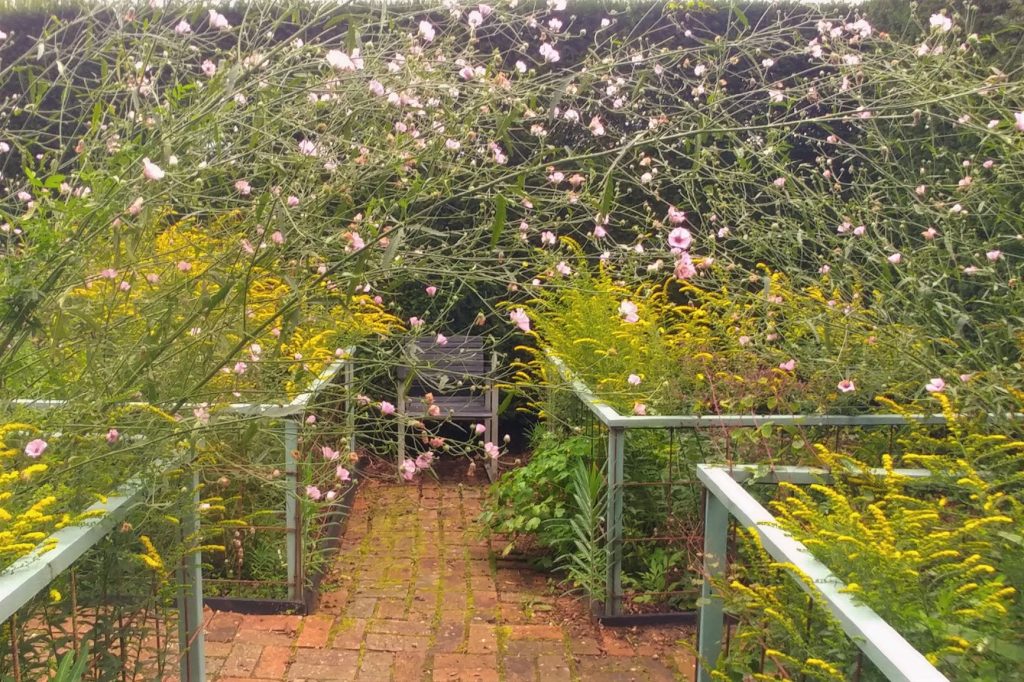 It was strange, and you may not believe me, how good that pale pink managed to look with a vibrant yellow.

But after its third winter as a new garden it is looking like this, and it’s MAY. It has been a cold and very dry spring, followed by a cold and then terribly wet spring, both including rabbits. So will this be an empty garden this year? Have all those expensive lovely plants vanished??? Been eaten?? Run away?? 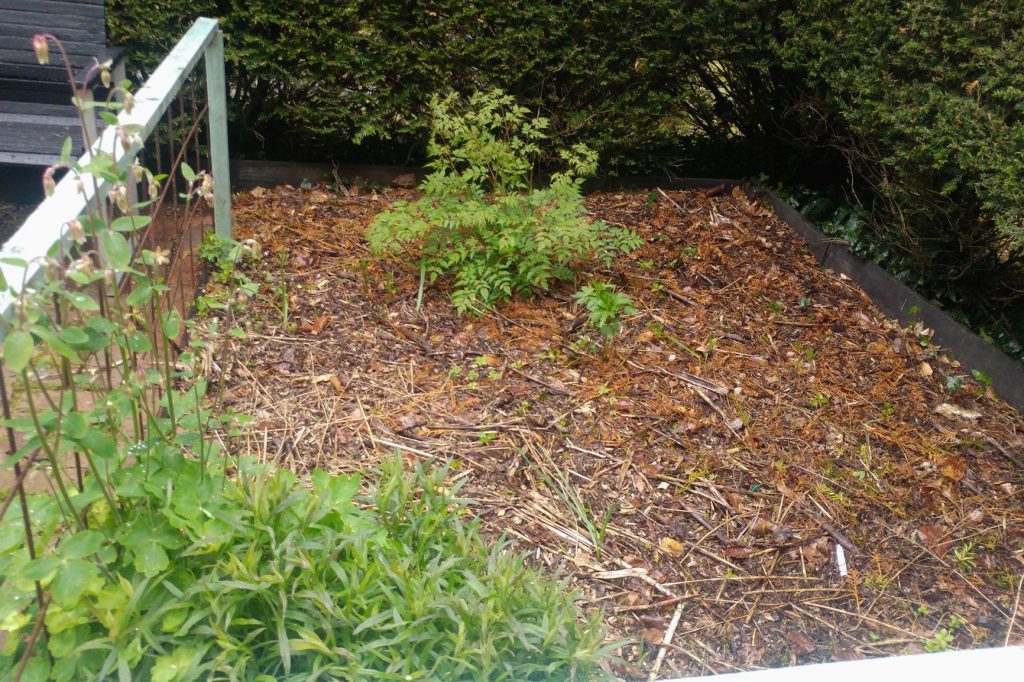 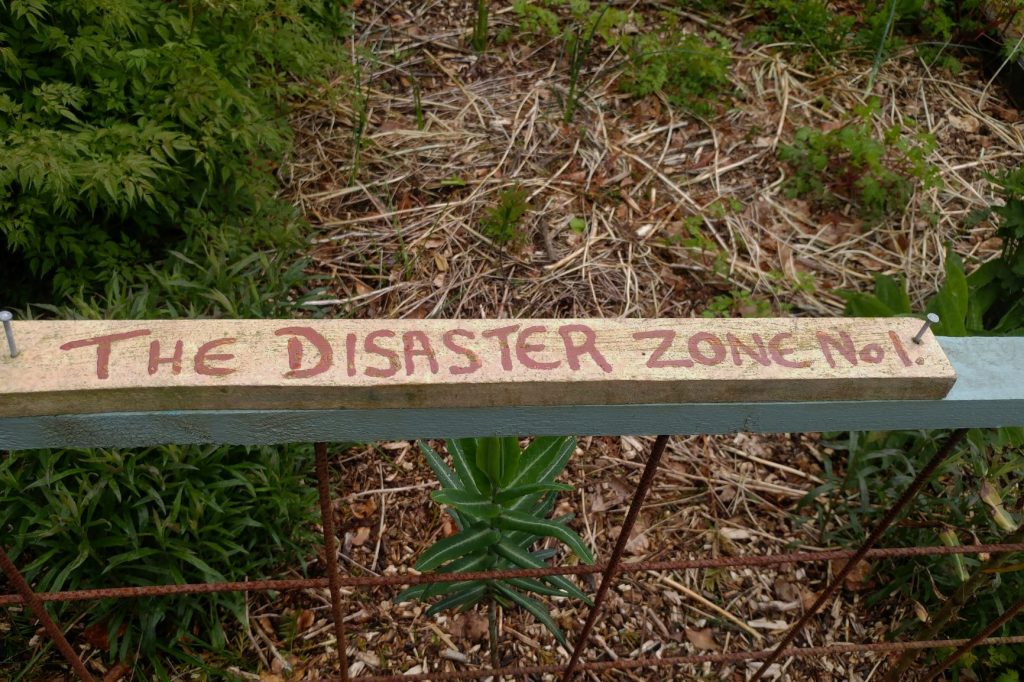 Will this garden continue to deserve its label?

After a good long time it’s not much better.

Then there’s the New Garden, which is in its fifth or sixth year now. That name must be obvious? But still some well-known and by now well-loved plants have yet, gulp, to reappear. The gardens is pretty full now, and can mulch itself every year simply by our cutting the foliage down in autumn, so the need to find mulch for it is mercifully gone. But the anxieties have not. 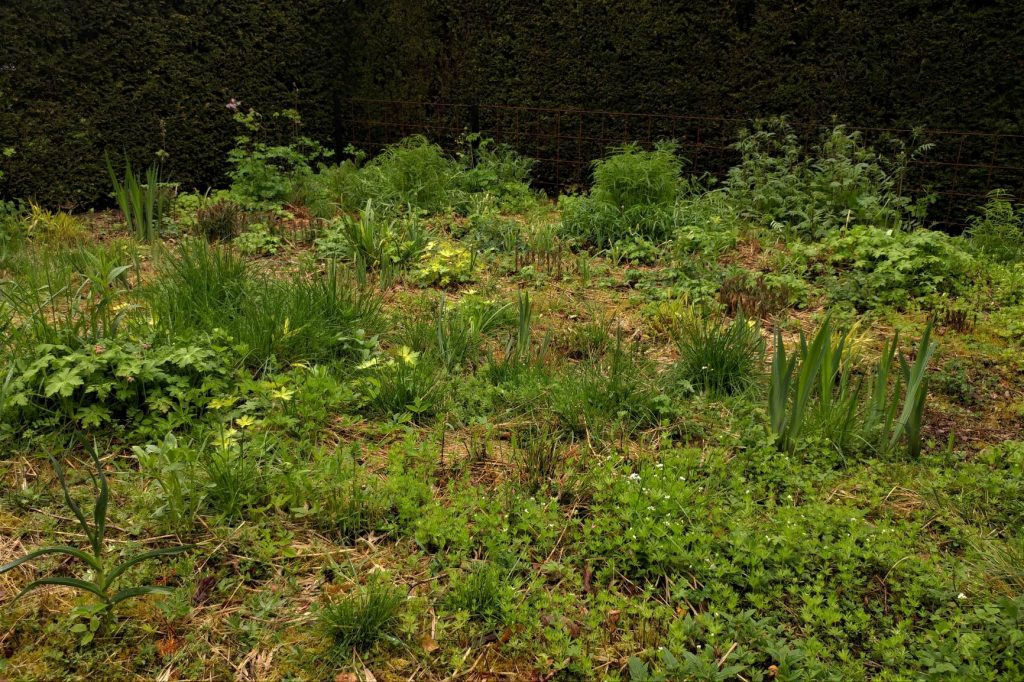 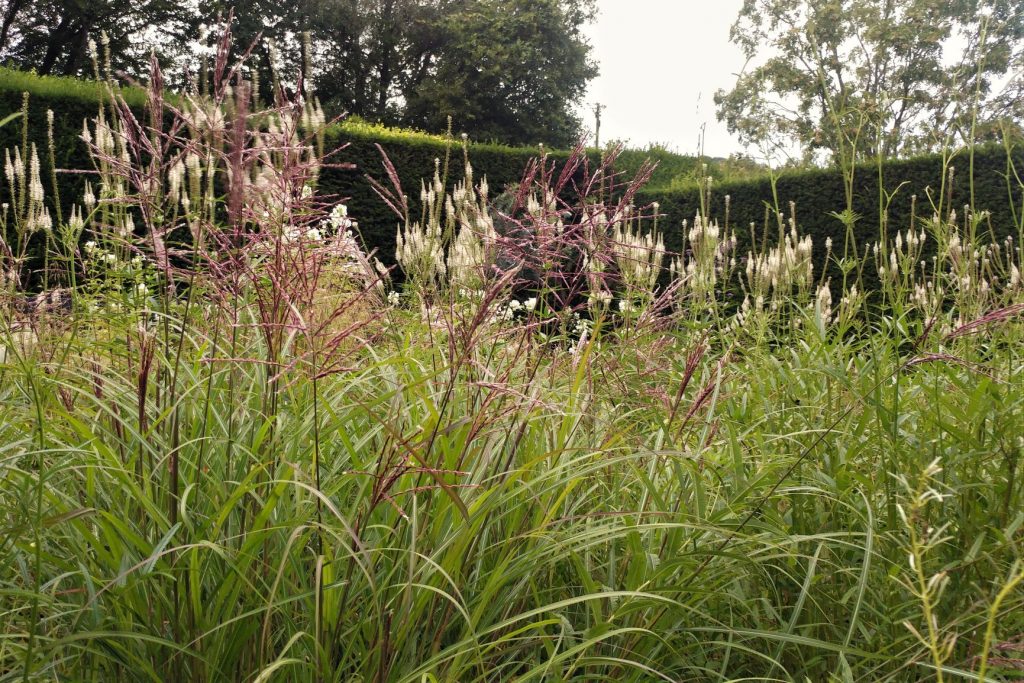 But at one point last year it was looking like this.

Growing ornamental grasses is particularly hard –  and not just because the rabbit loves them. Some ordinary lawn grass grew around one precious Molinia caerulea Edith Dudszus…. And the rabbit carefully chomped the Molinia, leaving the lawn grass to flourish. Also, grasses can be the worst for staying in bed past getting up time and keeping me desperately looking for a sign of growth for far too long. But I grow a lot of them, just to be hard on myself. 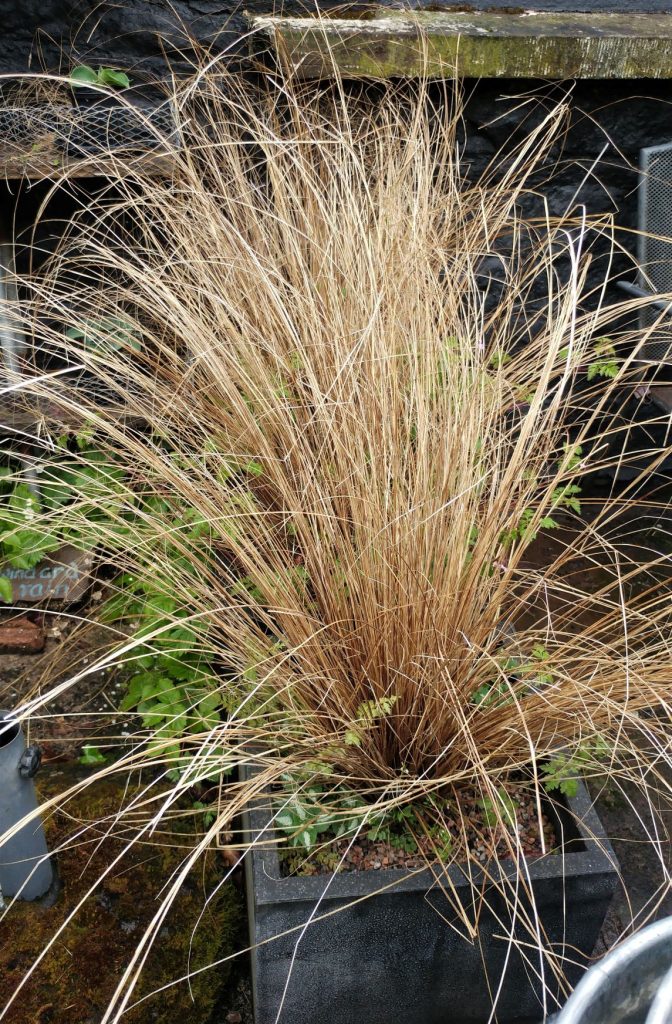 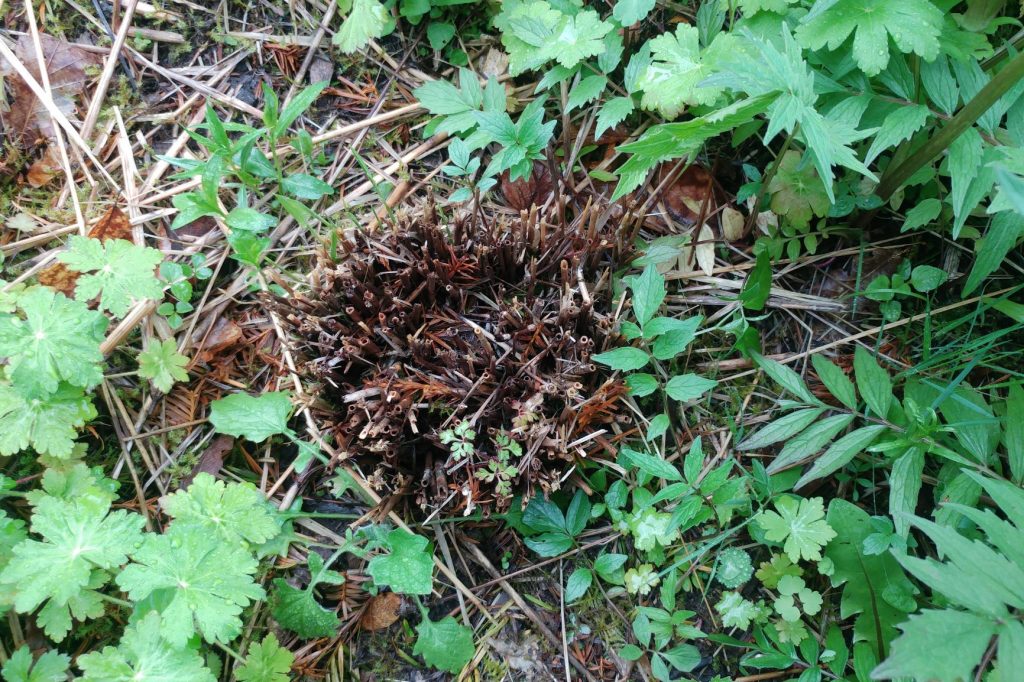 Not exactly Chelsea, is it? And I expect professional garden designers would get prosecuted for producing such efforts. But elsewhere at Veddw things do seem to have come through their early years (renovation is starting to knock on the door now) so perhaps I could feel optimistic. And reassure anyone contemplating a visit that we do still have gardens which are alive and thriving.

Spring is supposed to be such a wonderful time of year. And it is, except when it’s freezing cold, rabbit infested and sodden wet. And most of your plants are missing. 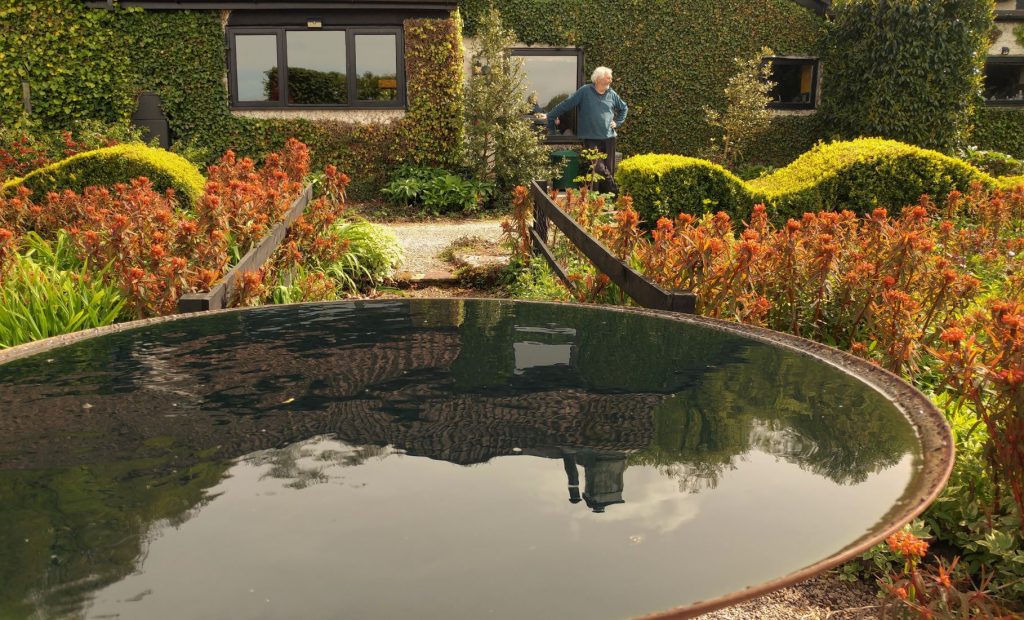 After 33 years some of the garden doesn’t look too bad. Then when it gets to this stage, you’ll find you’re having to rework things….(There’s that bloke again, getting in the picture…)

PS Charles assures me that rabbit’s days are numbered… Which number though,  I ask myself?