The Pleasures of Morels vs. The Fear of Black Bears: A Letter To The Midwest

The may apples have begun to bloom and the morels are fruiting.

As your words on the subject of mushrooming were predictably dismissive the last time I brought it up, I hesitate to make another attempt to pry open your closed, Big-Grocery addled mind, and tempt you with delicate, earthy flavors. But perhaps on the subject of morels I might tickle your naturally competitive edge? 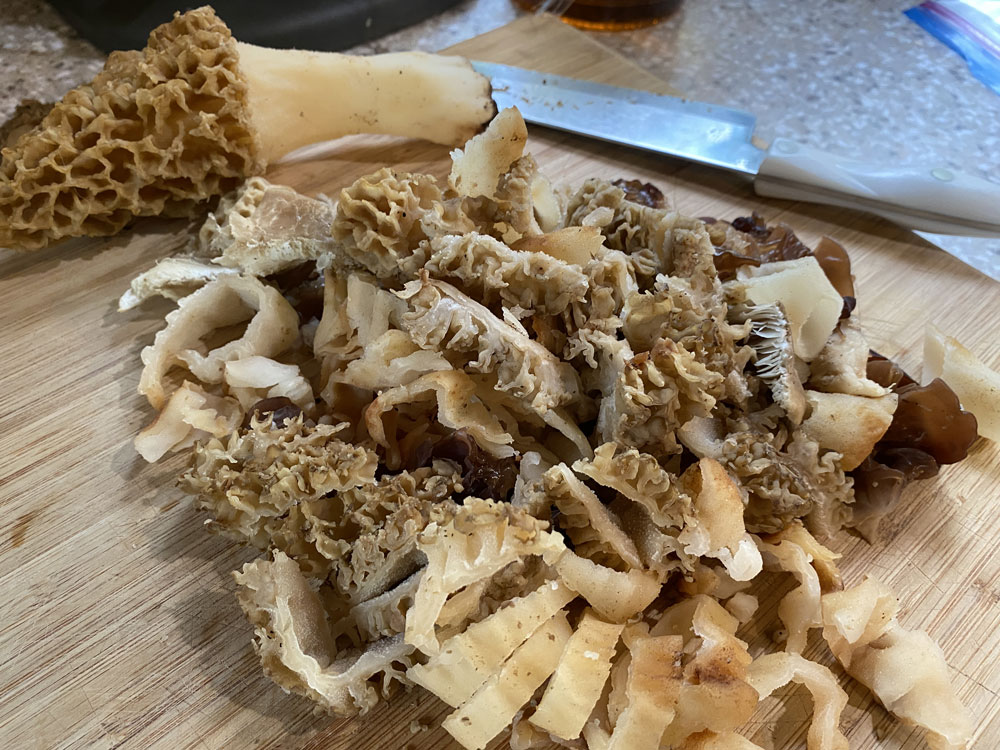 Barring truffles from the competition, of all the mushrooms out there – the oysters, the chanterelles, the chickens and the hens, the frightening and the fabulous, the marvelous and the meh – morels seem to be the species that get the foraging fires burning in everyone from neurosurgeons on their lunch hour to the guy who tends the register at the local convenience store.

Everyone wants in on that action, at least, everyone around here. And so, at this time of year, one is inundated by social media posts that feature huge baskets of the things with rulers laid out to prove that size matters, and five-year-olds showing you their stash, and cute influencer selfies next to pockmarked specimens with decidedly phallic overtones. 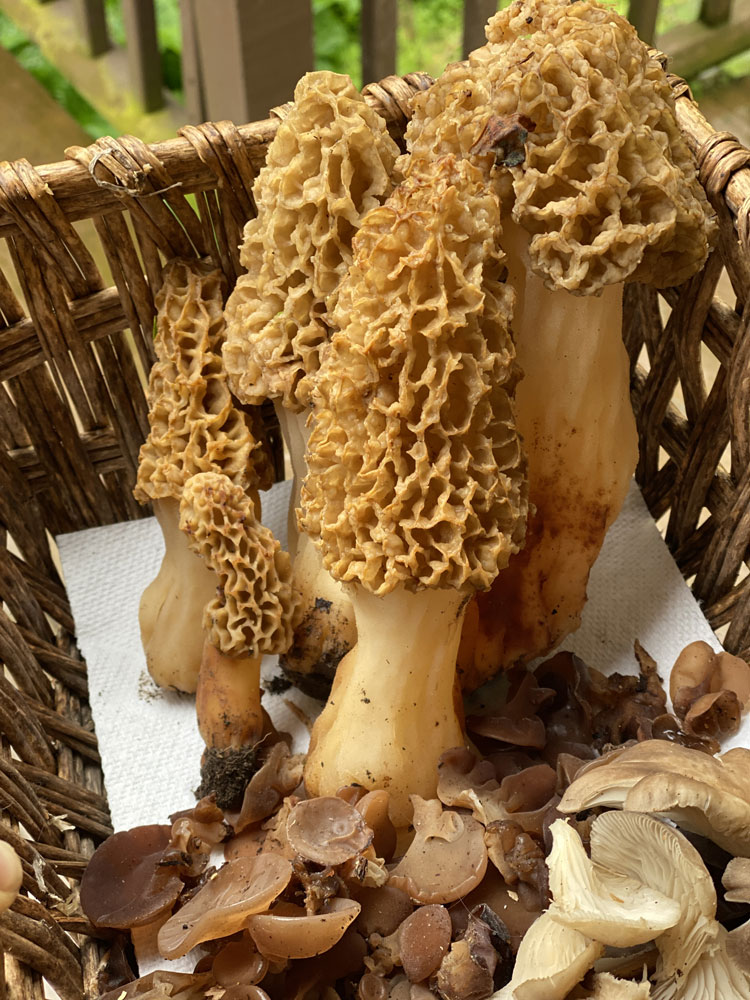 I can do basket shots too. Here are some of last year’s with oysters and wood ears.

Even the guy down the road tells you at the gas pump how he’s been picking at the same secret patch that his granddaddy picked, and don’t think for one moment young lady that he’s gonna tell you where that is. I can well believe that the people who tried to stop your access to woods you once tended did so for fear of morel-poaching.

And then spring is over and everyone goes back to neurosurgery, or being a five year old, or taking selfies next to other phallic specimens, and the woods once again become a place for forest-bathers, squirrels, and women burying the bodies of their work-from-home husbands.

I’d love to say this craze happens simply for the ability to hunt and taste a fresh morel. It is an unusual, hollow mushroom with a tawny cap covered with the nooks and crannies of Thomas’ most expertly crafted muffin. Those crannies can cradle a light alfredo sauce like they were born for the job; but the nutty, savory flavor of morels is so gentle and earthy that you really don’t need to blow out your diet with cream if you still want to indulge. 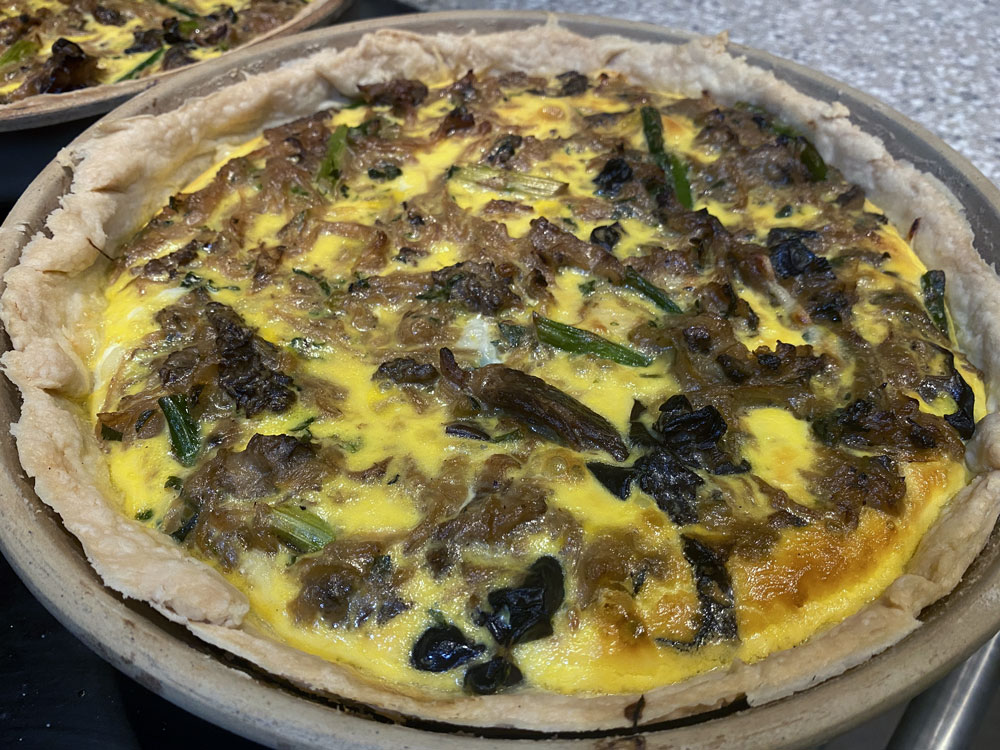 Or with mushroom pie. You showed some confusion last time about how savory and ‘pie’ go together, but this sort of fare makes up much of our winter diet. That and root vegetables. This one’s a spring pie however, with the contents of that basket above plus some garden asparagus.

Just for the record, that’s usually not people with farms.

Now, when I say that the morels are fruiting, I’m going by the afore mentioned frenemy posts as I cannot swear to the veracity of that statement as it applies to my own property this year. Sadly for me and my alfredo, a large black bear has decided that this stream valley is a lovely place to raise her children. At least for the moment.

That means that toddling up to my secret patch in my bathrobe and ill-considered footwear in the early morning is not, as they say, advisable. 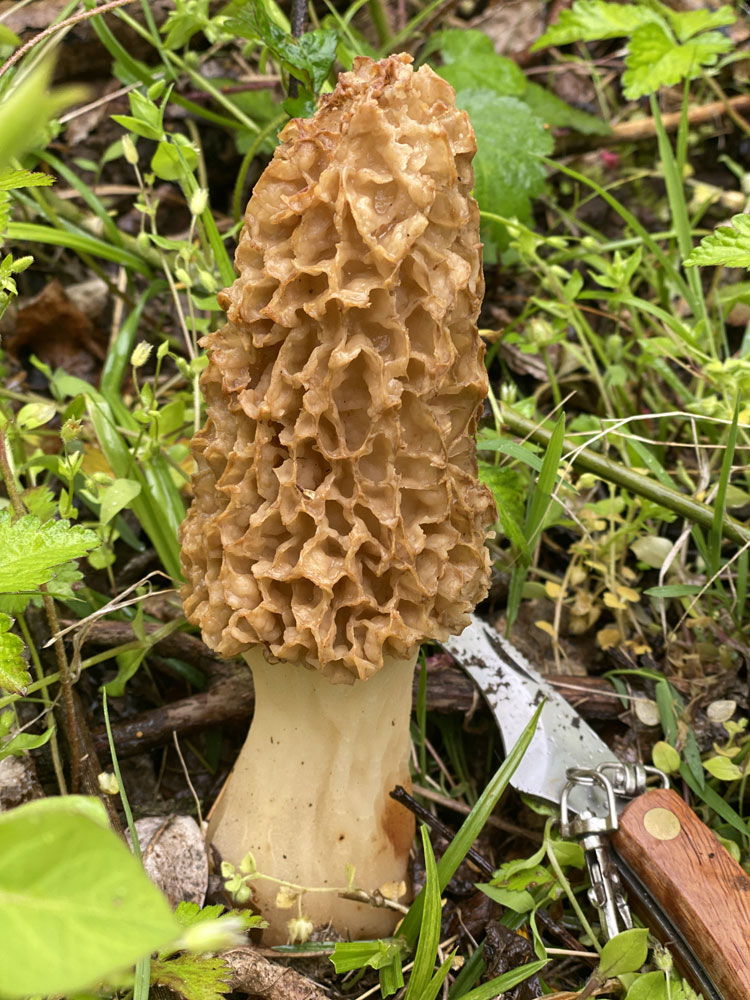 Most seasons I don’t give a thought to the threat of black bear, which cycle in and out of these woods every spring and fall, but this rather sizeable mother has been sighted too many times, hit our trash too many times, and has plenty of cover with the amount of invasive brambles around here. When Michael starts to get a little wary, I know it’s time to pay attention.

There’s also the fate of that poor woman in Colorado to consider, and she looked sensible and outdoorsy enough to have smarter dogs than I do.  If I accidentally crossed paths with a mama bear, the last thing I would see on this earth would be little Mungo clamped to its ankle like a charm bracelet and the backend of Nessa running for the house.

So, no morels for me – or at least until I can get Michael to follow me banging trash can lids together (I think I remember that from fifth grade). It also means that I’ve taken a temporary hiatus from building habitat nests during that magical period after work and before it’s time to start dinner.

However, there is much wandering to be had between dawn and dusk in areas of the garden with a full 360-degree view of one’s surroundings.  I was incredibly pleased with the addition of ‘Thalia’ narcissus in the barn and pergola garden area this year – so pleased that I plan to buy another crateful and liberally dot them throughout the miscanthus wedge in autumn. 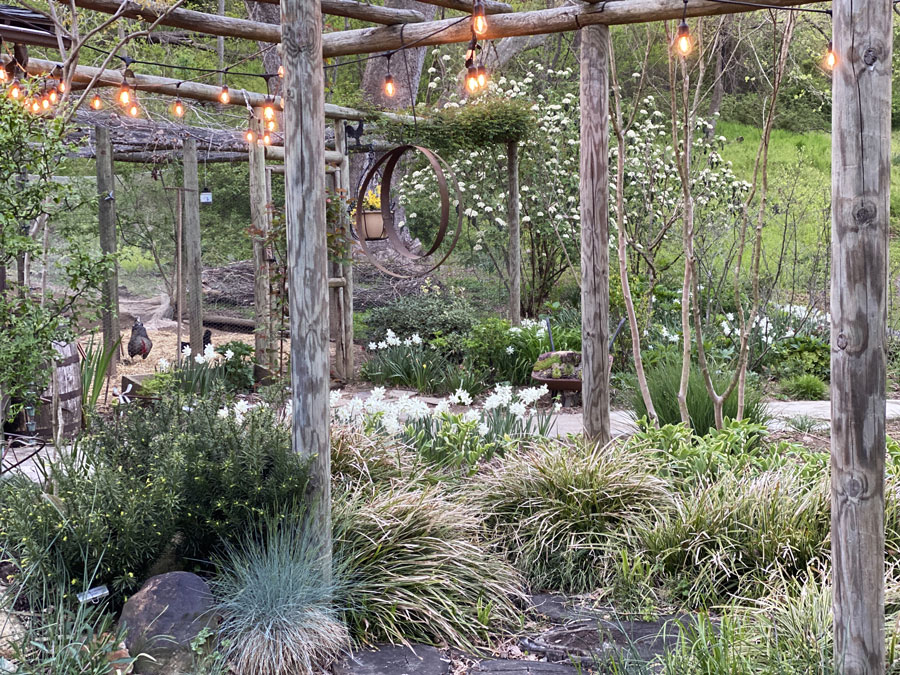 Whites and greens.  And browns, technically, but the resident gardener hasn’t gotten to the carex yet.

Their foliage will ripen and decay without offence under the summer-vigorous vase shapes of ‘Gracillimus’ and their late, long lived white flowers will make it look like I know what I’m doing for more of the spring.  Definitely one for those who are wanting to extend the daffodil season – or create a white garden. What they did against ‘Chardonnay Pearls’ deutzia brought a tear to my eye. 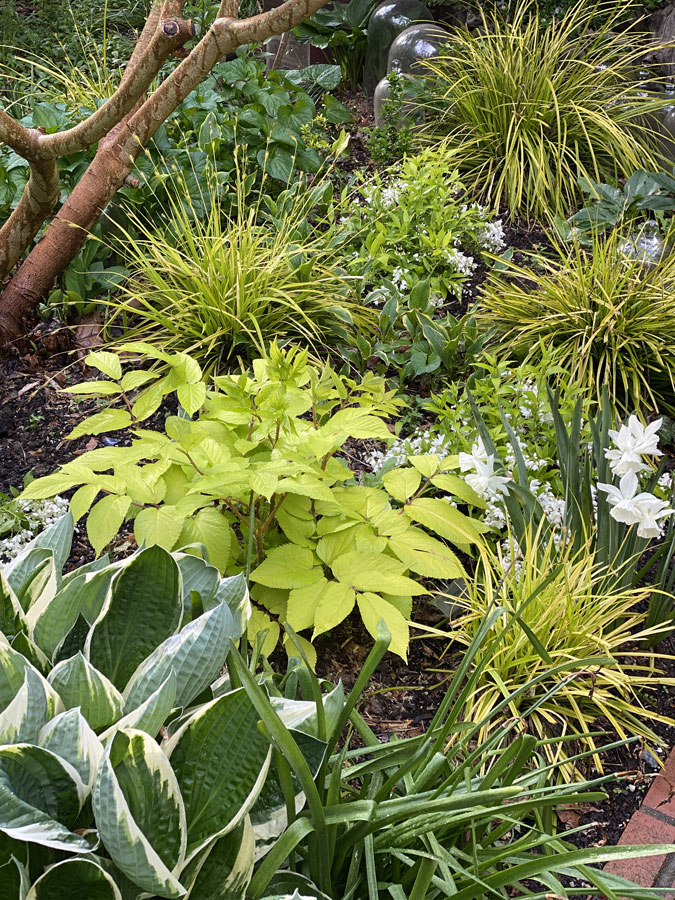 As for disasters, destruction and other failures of time – the new pond is filled with algae, the kitchen garden is still the Somme without poppies, and the Japanese stilt grass has begun to germinate.  Can’t go anywhere near the Long Bed without a prophylactic glass of something strong; and apparently, the voles have found the hakonechloa and completely wiped out what was a perfectly positioned (and incredibly slow-growing) stand of ‘All Gold’ along the bridge’s edge.

It’s difficult to measure how much I hate them. It would need to be a logarithmic scale – much like the Richter – and calibrated at zero by the least amount of froth that forms in the corners of my mouth upon finding the telltale holes nearing precious plants.  The hakonechloa was a Magnitude 7, but I have experienced Magnitude 9 on occasion. 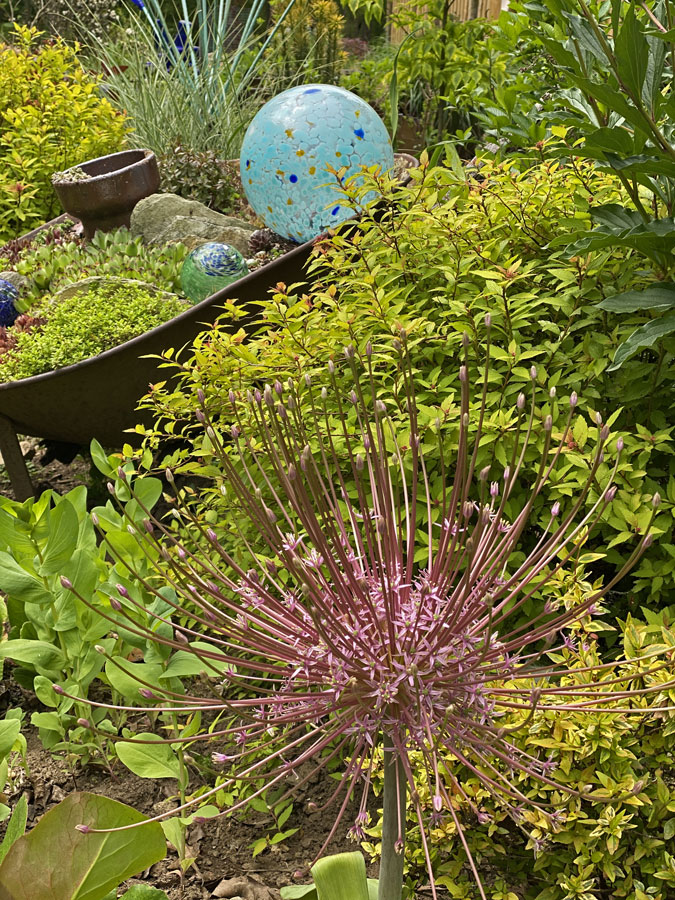 Allium schubertii – of 10 planted, I have four this year. Don’t believe what they tell you about voles hating onions. They use them to flavor their hakonechloa.

You will be sad to know that the Chelsea/Great English Gardens trip has completely sold out for September (with a wait list I believe), and the Gardens of Normandy trip is almost full.  I didn’t even have time to put the banners on my website for CarexTours – people are just so happy to be able to travel again.

Scott, I absolutely meant to tell you that registration was open for the Chelsea trip. Truly.

I so looked forward to you sitting in the back of the [well-apportioned] bus, drinking red wine and pelting me with one-liners from Banbury to London as Michele jabbed you in the ribs with her elbow – but somehow it just slipped my mind.  Perhaps next year.

Caught a small bee swarm for a friend on Tuesday, even though I had no intention of doing so this year.  I guess the good Lord wishes for me to sit down more often and contemplate the mysterious – which is one of the great gifts of keeping bees.

I just need to make sure my back isn’t to the woods.

P.S.        The fates have decreed that I will be in your neighborhood (term loosely used) for Cultivate – which is being held in person this year in July.  Hurrah! Any chance of a drink in Columbus? Tell Michele I am bringing a chaperone, though it has to be said that she usually gets me into far more trouble than I do her.